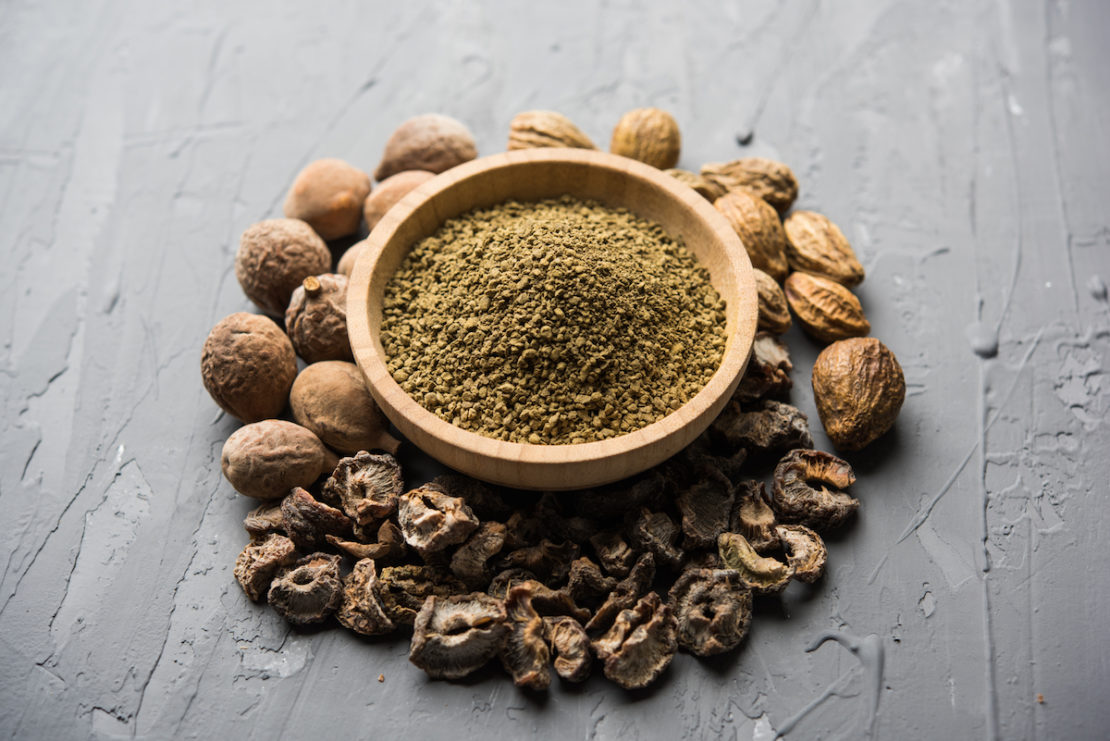 Most herb lovers have their shortlist of herbal essentials. These are the single herbs or formulas that you are sure to keep in stock, the ones that you always throw in the travel suitcase or day bag. If you were stranded on a desert island, which three herbs would you want to have with you? After reading this post, the answer just might be triphala. Triphala, meaning “three fruits,” is actually a combination of three herbs: haritaki (Terminalia chebula) fruit, bibhitaki (Terminalia belerica) fruit, and amalaki (Emblica officinalis) fruit. It is a time-tested classical ayurvedic formula with many usages.

The three fruits which triphala is composed of aren’t the kind of fruits you would want to mix into your yogurt or serve with whipped cream. What these fruits lack in taste appeal they make up for in health benefits—these fruits are as beneficial as they are bitter and astringent! What are these three fruits and what can we learn about their energetics and usages? By better understanding each component of triphala we see how these three remarkable fruits fit together to compose this renowned ayurvedic blend. 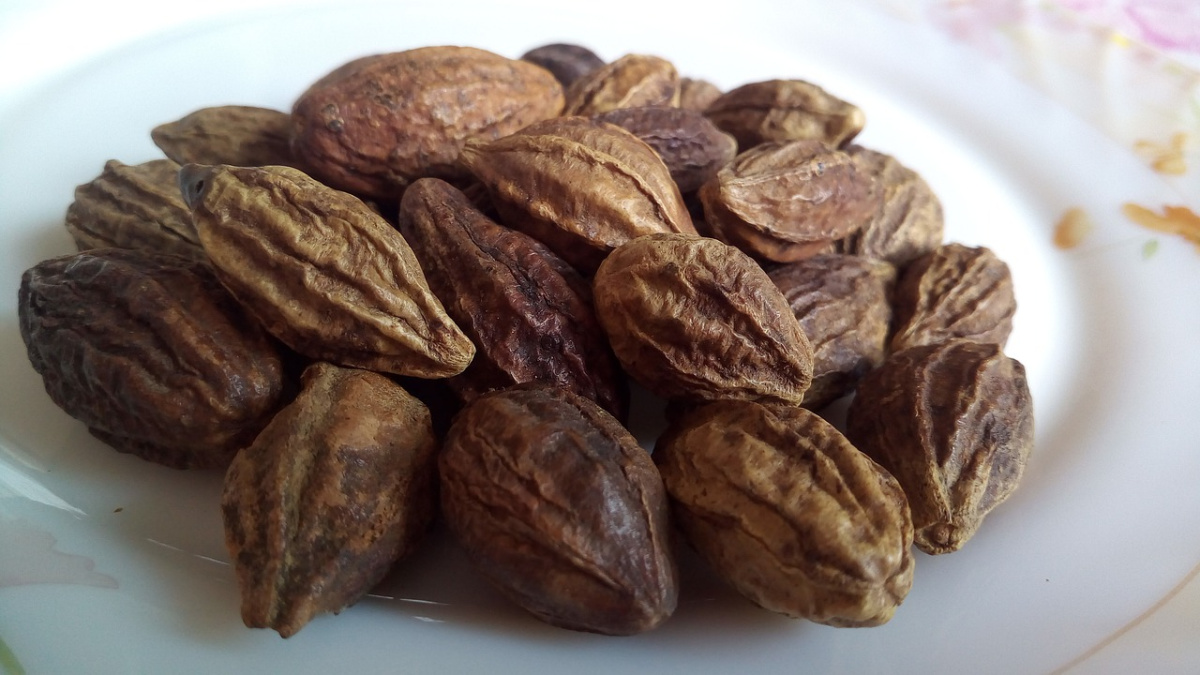 A special feature of triphala is that each fruit has a targeted effect on one of the three doshas. Though haritaki pacifies all three doshas, it is particularly helpful in reducing excess vata dosha. In fact, one can formulate a special vata-pacifying triphala blend that has a higher proportion of haritaki to amalaki and bibhitaki. (Triphala is typically composed of equal parts haritaki, amalaki, and bibhitaki.)

Haritaki is a large fruit-bearing tree that is native to India and Sri Lanka (Pole, 2013). Though it tastes highly astringent, haritaki actually possesses all six tastes except salty. Its hot energy and nourishing quality are part of what makes it particularly balancing for vata dosha (Dass, 2013). This is because vata dosha is cool, light, and dry by nature, so warming, nourishing foods and herbs balance vata. Haritaki acts upon all bodily tissues and is particularly helpful as a mild laxative, carminative, and anthelmintic (Dass, 2013).

Haritaki is an unusual rejuvenative in that it is purifying and astringent, removes ama (undigested food matter), and yet at the same time is powerfully restorative and promotes longevity. Since vata dosha is dry in nature, one would not typically reach for an astringent herb to balance vata dosha. However, haritaki’s astringency has a toning effect on the tissues, especially the colon, which is the seat of vata dosha (Dass, 2013).

To further understand haritaki’s energetics and usages we can refer to a classical ayurvedic text, Vagbhata’s Astanga Hrdayam. Here, the word lavana refers to the salty taste.

It is apparent from this passage that the ancient rishis held haritaki in high regard. Later in this post, I will explain the dosage for triphala. However, as a stand-alone herb, haritaki can be taken in doses of 3-9 grams per day (Dass, 2013). It is usually most effective as a capsule, powder, or infused into ghee. 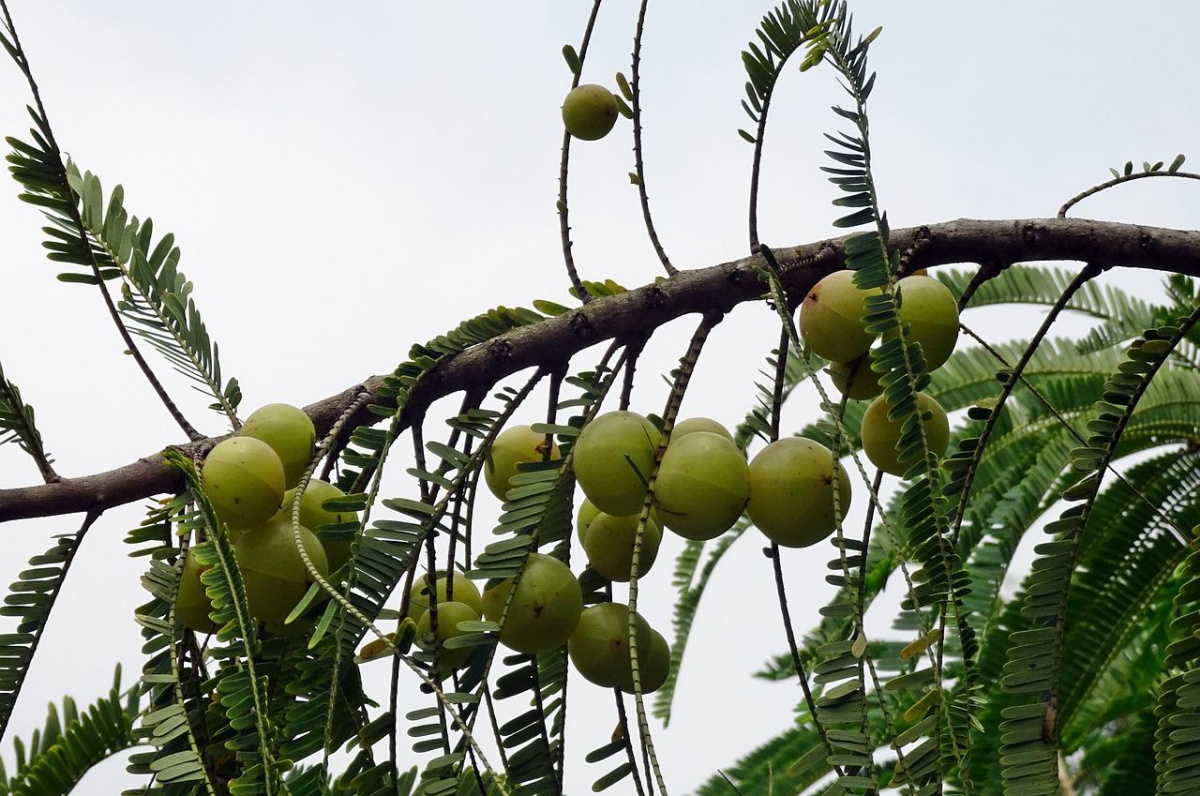 If haritaki has a special affinity for vata dosha, amalaki is one of the best rejuvenatives for pitta dosha. Similar to haritaki, amalaki possesses all the tastes except for salty, though on a personal note it strikes me as quite sour and astringent. Amalaki is cooling (making it perfect for pitta) and has a nourishing effect (Dass, 2013). Amalaki fruit grows on a tree that is prevalent throughout India. It is similar to gooseberry and the Varanasi variety is considered the most desirable (Pole, 2013).

To underscore amalaki’s nourishing qualities, we can turn to its name, “Amalaki or dhatri, the nurse, as it is like a nurse or mother in its healing properties” (Frawley & Lad, 2001, p. 157). A principal ingredient in the famous rejuvenating herbal jam chyawanprash, amalaki is a nutritive tonic, mild laxative, stomachic, and astringent (Frawley & Lad, 2001). It is also an incredibly rich source of vitamin C—one of the richest plant sources—that supports all bodily tissues, and even promotes ojas (vital life energy) (Dass, 2013; Pole, 2013).

Though it supports all bodily tissues and nourishes ojas, amalaki has a special affinity for the blood and circulatory system. It is considered a “blood-builder” and is rich in antioxidants; amalaki protects the heart, calms palpitations, and by pacifying excess pitta dosha, promotes a clear, tranquil mind (Pole, 2013).

The suggested dosage is anywhere from 250 mg-30 grams per day (Dass, 2013; Pole, 2013). It can be taken as a capsule, tincture, powder, or enjoyed in the above-mentioned herbal jam chyawanprash. 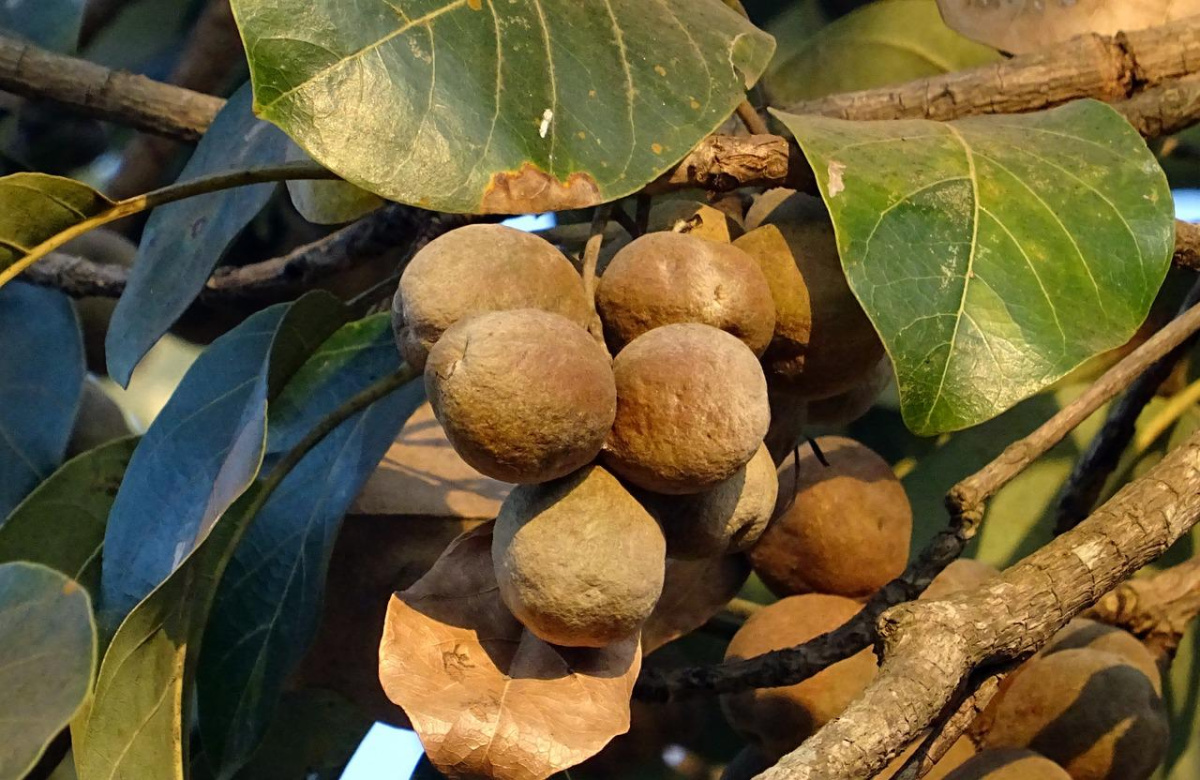 Upon examining the three fruits that combine to make triphala, one appreciates the elegance of this simple formula. Haritaki has a special affinity for vata dosha, amalaki acts specifically on pitta dosha, and bibhitaki is particularly good for kapha dosha. Bibhitaki is a small brownish fruit that grows on a large tree of the myrobalan variety; it is prevalent throughout India and Sri Lanka (Dass, 2013; Pole, 2013).

Bibhitaki has an astringent taste, a hot energy, and a nourishing post-digestive effect (Dass, 2013). Considered a rasayana (deeply nourishing herb), it helps clear congestion and accumulation, particularly the type that pertains to excess or obstructed water (Dass, 2013). This is why it is such a valuable herb for balancing excess kapha, as kapha dosha is composed of earth and water.

This astringent little fruit is indicated for digestive issues such as constipation and parasites, and in addition may be used for cough, cold, headache, sore throats, and kidney and gallbladder stones (Dass, 2013). According to esteemed ayurvedic practitioners Dr. Lad and Dr. Frawley, “Bibhitaki is effective for all manner of stones and kapha accumulation in the digestive, urinary, and respiratory tract; it liquifies and expels them…” (2001, p. 164).

Putting It All Together: Triphala

Haritaki, amalaki, and bibhitaki are each remarkable herbs in their own right. When you combine all three in equal amounts you get triphala, a time-honored digestive support for all types. Triphala has many usages, however, it is probably most widely known for its ability to regulate the bowels. For this purpose, it can be taken as a powder, capsule, or infused in ghee. One may turn to triphala when there are signs of sluggishness, bloating, constipation, and general indigestion (Pole, 2013).

Triphala is quite outstanding in that it pacifies (is suitable for) all three doshas: vata, pitta, and kapha. It is a mild, effective laxative and at the same time tonifies and regulates the colon (Dass, 2013). The astringent nature of triphala is partially responsible for its ability to tone the tissues of the colon. I have seen this blend work especially well for vata types who experience chronic or occasional constipation. Triphala is gentle enough that it can be taken regularly over long periods of time and is also a great asset to those who experience constipation when traveling. That said, it is always wise to understand and address the underlying causes of constipation. However, when diet and lifestyle modifications are not enough, triphala can serve as an invaluable herbal support for many people. For the purpose of stimulating a normal bowel movement, it is best to take triphala in the evening, about an hour or so before bedtime.

In addition to regulating bowel movements and assisting digestion, triphala is commonly used for irritated or inflamed eyes. To use in this way, one would make a (well-strained) eyewash out of triphala infusion (Pole, 2013). However, before embarking on this practice, it is a good idea to seek the guidance of an experienced ayurvedic practitioner. The infusion can also be used as a mouthwash for inflamed gums. Additionally, another indication for triphala is skin irritation, such as acne or rashes (Pole, 2013). It is useful in this way for its overall purifying qualities, helping to regulate elimination and reduce the accumulation of ama (metabolic waste/undigested food matter) which can affect skin health. 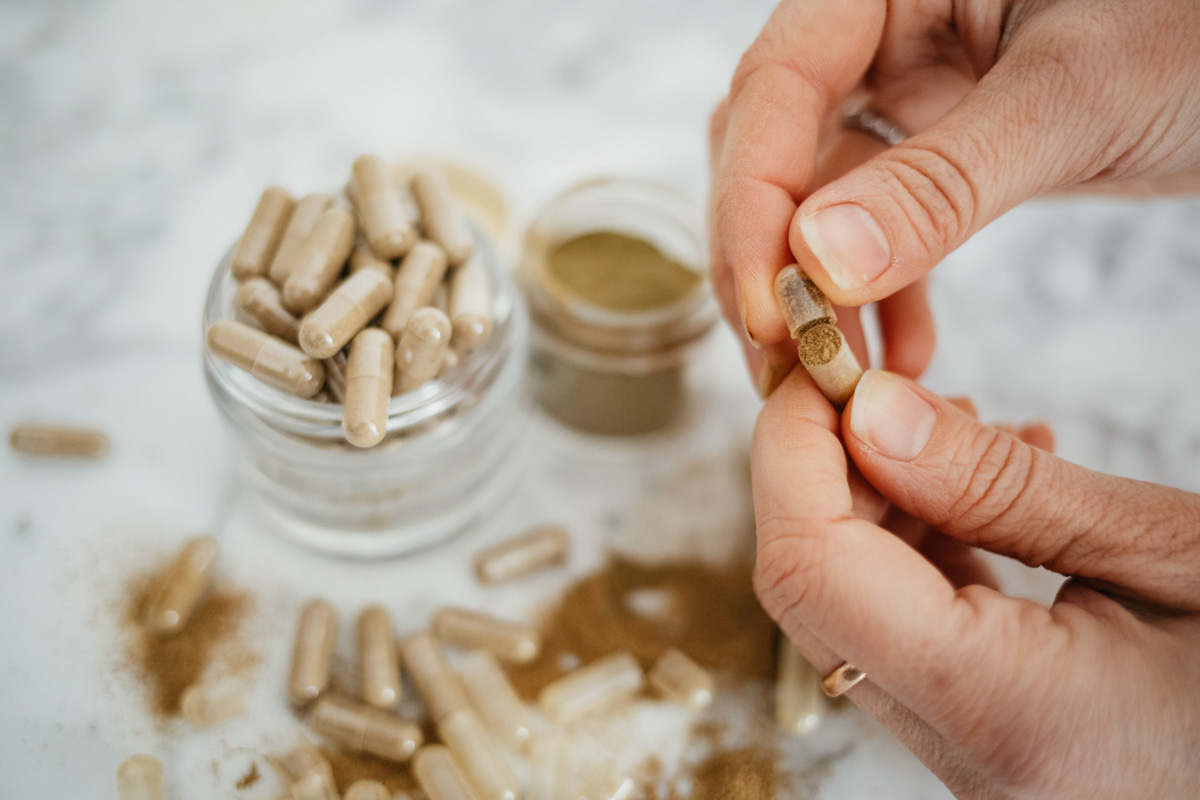 How To Take Triphala

Triphala does not have the most pleasing taste. For this reason, I generally suggest taking it as a capsule rather than a powder infusion. However, some people are fine gulping it down as an infusion and find added effectiveness with this method. For some, especially those who tend toward dryness, plain triphala can be too drying to be effective as a mild laxative and bowel regulator. In this case, one may want to try taking triphala infused in ghee. You can make triphala ghee at home, or for ease, purchase it from an ayurvedic product supplier. Alternately, small amounts of demulcent herbs such as licorice (Glycyrrhiza glabra) root, marshmallow (Althaea officinalis) root, or shatavari (Asparagus racemosus) root may be added to a triphala blend in order to lessen the drying aspect.

Caution: Since triphala stimulates the apana vayu (the downward and outward energy), use caution with pregnancy.

When it comes to dosage for triphala, there is a wide range. As a carminative or for gentle cleansing and skin support, one can keep to a smaller dose. To address constipation, a dosage of 3-6 grams daily is not unusual. That said, it is always a good idea to start with a low dose to see how your body responds and then gradually increase the dosage if needed. Also, if you are working with a powder infusion and aren’t sure of the quantity by grams, start with ½ – 1 teaspoon of the powder infused in 1 cup of hot water once daily (Lad, 1998).

Triphala, a time-honored ayurvedic classical formula, is a wonderful ally for vata, pitta, and kapha types alike. Consider adding triphala to your travel bag or herbal toolkit if you experience digestive disturbances such as bloating, indigestion, or constipation. Also, triphala can serve as a gentle purifying herbal formula for those who experience skin inflammation and acne. Though not sweet to the tongue, the benefits of triphala can be sweet to enjoy! 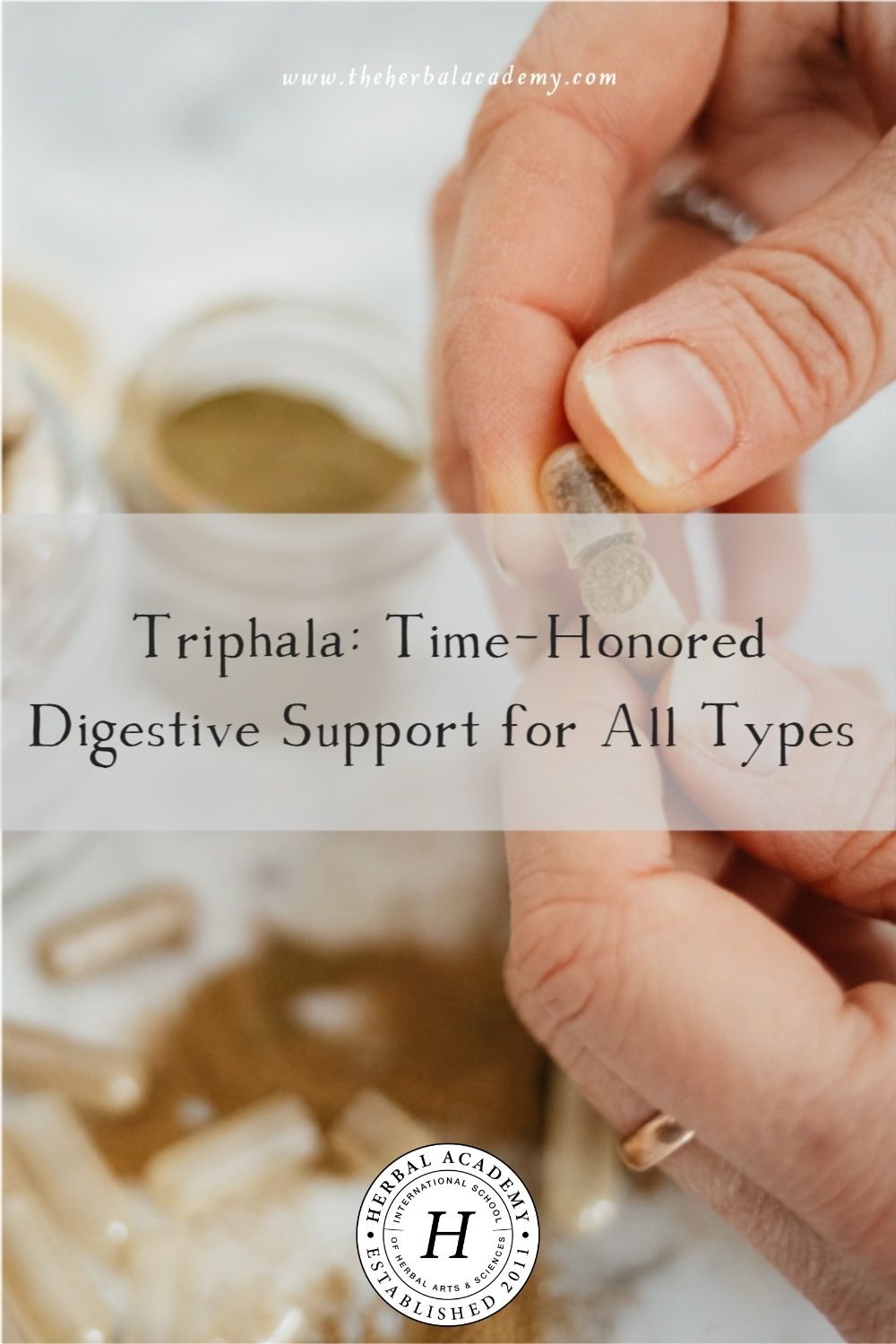