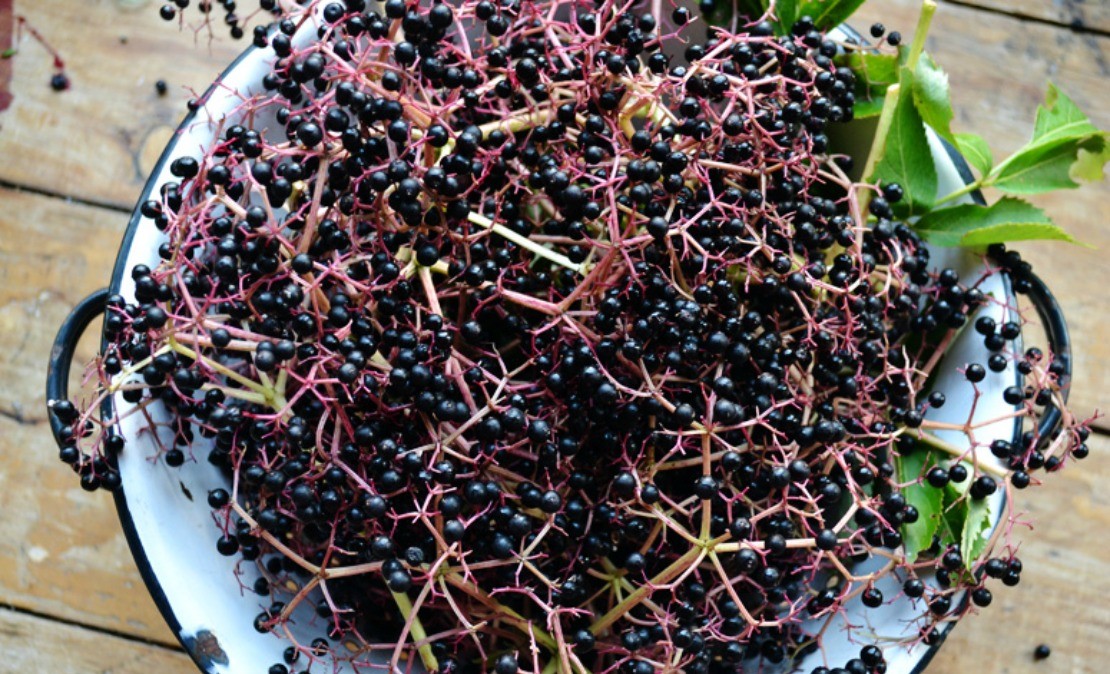 Across the country, the elderberries are turning dark purple or black and herbies everywhere are harvesting them, drying them, and formulating their favorite elderberry preparations for the seasons ahead.

In my blog in June, we talked about the plant, the flowers, and some of the wonderful lore and magic that surround the elder.

The flowers are sweet smelling and good for both culinary and medicinal uses. But what are the berries all about? (For the purpose of this blog, I am referring only to S. nigra and S. canadensis.)

The plant has been around a long time. Hippocrates wrote about it, as did Dioscorides and Culpepper! In 1644, Anatomia Sambuci, a 273-page book about elder’s many uses, was written by Dr. Martin Blochwick. (This was later translated from Latin into English in the 1650’s and reprinted in 1677.) Elder has often been referred to as the “medicine chest of the common people.”

In an 1895 version of The Cottage Physician, elderberries are said to be “…rather laxative and also act upon the skin. They are often used in treating rheumatism, gout, scrofula and habitual constipation (Post, 1895).”

Long ago, an older winemaker told me the story about the 1700’s Portuguese winemakers who added elderberry wine to their more expensive varieties to extend them. The Portuguese government finally stepped in and allegedly outlawed the planting of elder to avoid the diluted wines. What was discovered by the wine drinkers was the “impure” wine seemed to help with arthritic/rheumatic pains. When the elder was no longer added to the wine (and it became “pure”), the various pains seemed to return to the wine drinkers. He felt the ratio would have been quite high of elderberry wine to the “pure” wine. Just something to think about!

The berries are nutritious, rich in flavonoids, and high in vitamin C, vitamin A, bioflavonoids, betacarotene, iron, and potassium. (Gladstar, 2012).

The USDA used to publish an ORAC (oxygen radical absorbance capacity) table that measured the anti-oxidants in various plants/foods. They discontinued this in 2012 due to their belief that the database had little relevance; however, you can still find the tables on the Internet. According to the database, elderberries had a higher than average anti-oxidant level.

Research in Israel and the United Kingdom in the 1980’s and 1990’s indicated elderberry appeared to decrease both the duration and severity of the avian flu if taken properly (Zakay-Rones et al., 1995).

Our old folk medicine is making a comeback. Now you can find Sambucol syrups in most stores. When traveling in the UK recently, I found one that knocked anything resembling a cold/flu right out of me and within twenty-four hours.

Harvest only the fully ripe berries that are either black or very dark purple. Discard any unripe or green ones. When ripe, the branches usually droop, so watch for that. Remember to leave some berries on the bushes to enable them to propagate.

These berries are not the ones to eat as many as you pick. They’re tiny and if you eat them raw you’ll probably end up with some serious gastric distress. Elderberries need to be cooked or dried before using. The seeds contain a cyanide-inducing glycoside that becomes ineffective when heated (HSA Elderberry Essential Guide, p.15).

When you locate a lush bush of ripe berries and they’re just hanging there waiting to be picked, try to gather them soon or the birds will beat you to it. Once I found a wonderful bush, picked a bunch and went back the next day to find it nearly empty!

You can freeze the berries for use later on. You can also freeze them briefly to help with the tedious process of de-stemmng them. I haven’t found an easy or less time consuming method, so I just pick a time and do it!

Using your favorite method, dry the elderberries for later use, and be sure to get them in air tight containers as soon as they are dry. I usually use my dehydrator for this, but if I’m home and it’s a warm weekend, I will lay them on a screen in the back of my truck and park in the sun. The trick is to dry them fast and out of the sun. Once they are dried, you can then de-stem the berries.

Elderberry is one of those plants whose uses are endless. From culinary to medicinal, most herbalists have lists of what they like to make from the berries they have carefully harvested, dried, and stored.

They can be used much like other berries in various recipes – scones, pies, cakes, muffins, jellies, and vinegars are some of the most common uses.

Elderberry wine is a favorite country wine in our area, and a local winemaker makes it each year. I always keep a bottle from the previous year until I know the current year is a go. We have local growers who tend bushes and sell to the wineries who are always willing to show us their crop and share information and cuttings.

I found an interesting recipe in the Herb Society of America’s Northern California Unit’s book The Enchantment of the Elderberry (n.d., p. 8) that I thought I would share:

From Herb Society of America’s Northern California Unit: The Enchantment of the Elderberry

This is another interesting recipe I adapted from an old Euell Gibbons cookbook . This is particularly good to take on trips of hikes.

When you unfreeze these, they should be sliced and eat within a day or so; I found they mold quickly.

Every herbalist I know has their own favorite elderberry syrup recipe. This is mine, adapted from many recipes I’ve seen over the years:

Take by the tablespoon at the first sign of flu.

Elderberry mixes well with other plants, especially spices for teas. I like elderberry and elderflower in equal parts. I boil the elderberries first and then add the flowers and let sit another five minutes. I also make a tea from elderberry, Echinacea, and ginger and lemon if I have it around.

Elderberry elixir is a favorite around here, and my version is from my aunt. She would fill a jar about 1/3 full with dried elderberries and then add about 1/3 jar of honey and stir well. Then top it all off with 1/3 jar of Korbel brandy and mix again. Let it sit for 4-6 weeks and strain and rebottle in a sterile bottle. This is one I tend to keep on hand since visiting friends, sick or not, often ask for “one of those elderberry shots” when they come over. I also recommend checking out our Elderberry Calendula Cold and Flu Elixir!

We make elderberry honey for on toast or in teas, elderberry tinctures, oxymels, and cough syrup and drops. Last year I made elderberry gummies that were delicious but more of a candy than a health food!

The berries should be ripe in most areas of the country right now. Ours are usually late, around Labor Day. I hope you decide to try working with the elderberries and harvest and dry some this year!

The Herb Society of America. (2013). The Elderberry Essential Guide. www.herbsociety.org