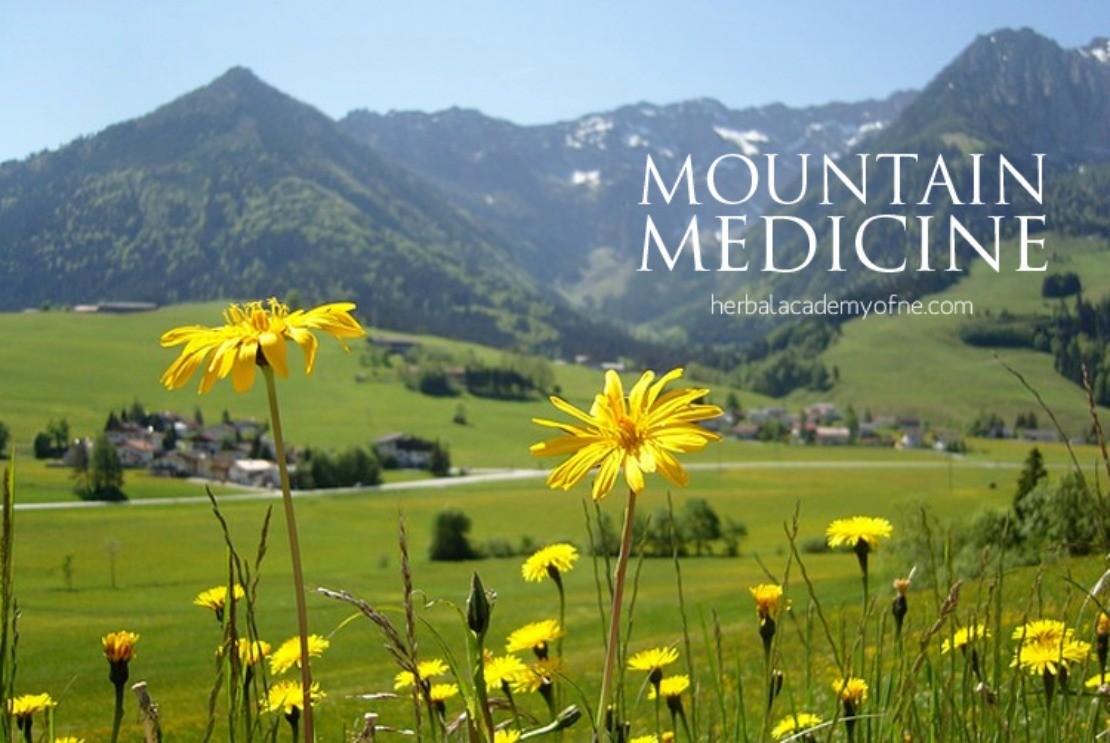 Those of us on the path of studying herbalism will attest that learning about the edible and medicinal properties of plants has shifted our view of the natural world around us. Where once we may have identified nature by ecosystem — yard, forest, field, swamp, lake, mountain, desert — we now see the trees, plants, and mushrooms within those ecosystems, and recognize them for their individual roles and medicinal properties. The green world around us is suddenly filled with trusted plant allies that we can turn to for nourishment and healing. Of course the plants have been there the whole time, but the shift in our understanding of their nature is a revelation. So the plantain at our doorstep, yarrow in the yard, or mugwort along the roadways transform in our eyes from overlooked weeds into celebrated remedies. Just like Cinderella, only…it turns out that we are the ones undergoing the transformation!

With this frame of mind, venturing into new ecosystems and learning new plants is an exciting adventure. This summer found my family backpacking in the forests and subalpine regions of Washington in the Olympic Mountains and Mt. Rainier National Park. From the towering old growth trees and temperate rain forests to the wildflower meadows in peak bloom, it was nirvana for a plant lover. I was enchanted with the drooping branches and stringy bark of the massive Western redcedar trees, impressed by the tenacious Sitka spruce and avalanche lilies, and delighted by the meadows filled with purple lupine and scarlet paintbrush flowers. There was one plant in particular I was earnestly seeking: the hardy yellow arnica that grows in the high meadows and forest clearings of mountainous regions of western North America, Europe, and Siberia. As it turns out, the Pacific Northwest has the highest diversity of arnica species on the planet (Gladstar, 2000)! I was determined to finally meet arnica in person.

I’ve been enamored with arnica ever since I used infused arnica oil to relieve leg muscle pain after a particularly punishing hike. With both legs aching from hip to ankle, I was sorely (ha ha, couldn’t resist) in need of relief. Out of curiosity, I mustered the willpower to apply arnica oil to just one leg to test arnica’s healing ability. The next day I awoke to two very different scenarios — my left leg still aching and sore, and my right leg markedly improved with very little soreness to speak of! It was a telling example of the healing power of arnica.

Arnica montana is native to Europe and also grows in northern Alaska and British Columbia, whereas A. cordifolia and A. latifolia predominate in the Western United States (Gladstar, 2000). A. chamissonis is native to the United States and is cultivated as a substitute for A. montana at low elevations. There are several other species as well, but all seem to have similar medicinal uses. Arnica is known as an injury remedy, and has been used for thousands of years in the European Alps and by Native Americans (Holmes, 1997).

It is an anti-inflammatory and vulnerary herb used to treat pain, swelling, and bruising associated with traumatic injuries such as fractures, sprains, bruises, and contusions, as well as muscular pain from overexertion. For this purpose it can be used topically on unbroken skin or homeopathically. Arnica is toxic and must be used with caution and under the close supervision of a qualified herbalist if taken internally. Homeopathically, arnica is very safe and is used to support healing in the case of shock, post traumatic stress disorder (PTSD), post surgical trauma, invasive dental work, and concussion in addition to its aforementioned use for injuries.

No first aid kit is complete without arnica oil or salve, and fortunately they are both very easy to make. Due to overharvesting, A. Montana should not be wild harvested, and harvesting of the North American species should be limited. We recommend buying cultivated arnica from a trusted source like Mountain Rose Herbs in Oregon or Zack Woods Herb Farm in Vermont.

Yarrow is a much more familiar plant than arnica, seeing that it grows in meadows, pastures and along roadsides throughout temperate and boreal regions of the world. And in my yard. And probably in yours, too. We’ve already sung yarrow’s praises as a natural remedy for colds and flu, but yarrow is perhaps best known for its wound healing properties. Yarrow was used from the time of the Ancient Greeks up until the First World War to treat wounds, thus its common names soldiers’ woundwort, staunch weed, nosebleed, woundwort, and carpenter’s weed (McIntyre, 1996; Berger, 1998).

No first aid kit is complete without yarrow for use as an antiseptic and to stop bleeding. Yarrow is also antibacterial, anti-inflammatory, astringent and analgesic, making it ideal for preventing infection, stopping blood flow, and reducing swelling and pain in wounds. Herbalist Robin Rose Bennett uses yarrow for “old or new bruises, swellings from poisonous bites and stings, and fresh wounds (2014).” And this is where knowledge of the plants in an ecosystem and relationships with trusted plant allies in the green world around us is so valuable.

As one would expect on any hike in the backcountry, there is always a risk of injury from falling, twisting an ankle, overexertion, or…cutting oneself with a knife. That’s exactly what my daughter did while whittling a stick at a subalpine campsite — a deep cut into the tip of her finger with her jackknife. We tried to staunch the bleeding with gauze and pressure, but it was surprisingly ineffective. I had seen yarrow here and there throughout the day’s hike and knew it must be around, so I ran to the meadow and within seconds found a few yarrow leaves. We wrapped her finger in leaves, covered it in gauze, and then applied pressure. Within a minute the bleeding had slowed considerably, and within a few minutes it had stopped. Thank you, yarrow! For those times when yarrow isn’t growing a few steps away, stock a first aid kit with powdered yarrow or yarrow tincture. To stop bleeding and disinfect a wound, apply a poultice of fresh yarrow leaves, a pinch of dried yarrow powder, or a squirt of yarrow extract to the wound, ideally after cleansing. 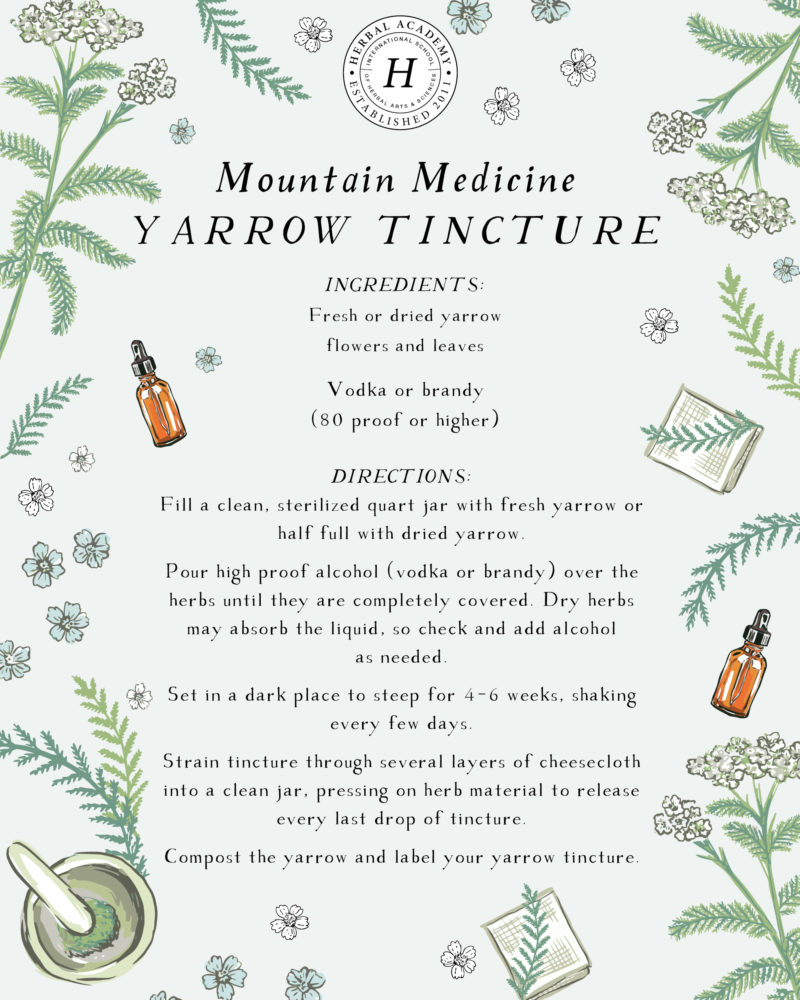 Read here for a complete tutorial on making herbal tinctures.

Once you’ve made arnica oil and yarrow tincture, pack them into a first aid kit to have at the ready for injuries. But don’t stop there! Keep learning about the common first aid plants in your locale — like plantain for bee stings, chickweed for bug bites, jewelweed for poison ivy, and yarrow to stop bleeding — and you’ll always have an herbal remedy nearby, whether you’re hiking in a subalpine meadow, running on a woodland trail, or picnicking in a park. The plants offer their medicine freely, and knowing when and how to use them is incredibly empowering! To learn more about herbal medicine, join us in our ever-growing online herbal community. We are enrolling in both the Introductory Herbal Course and Intermediate Herbal Course.