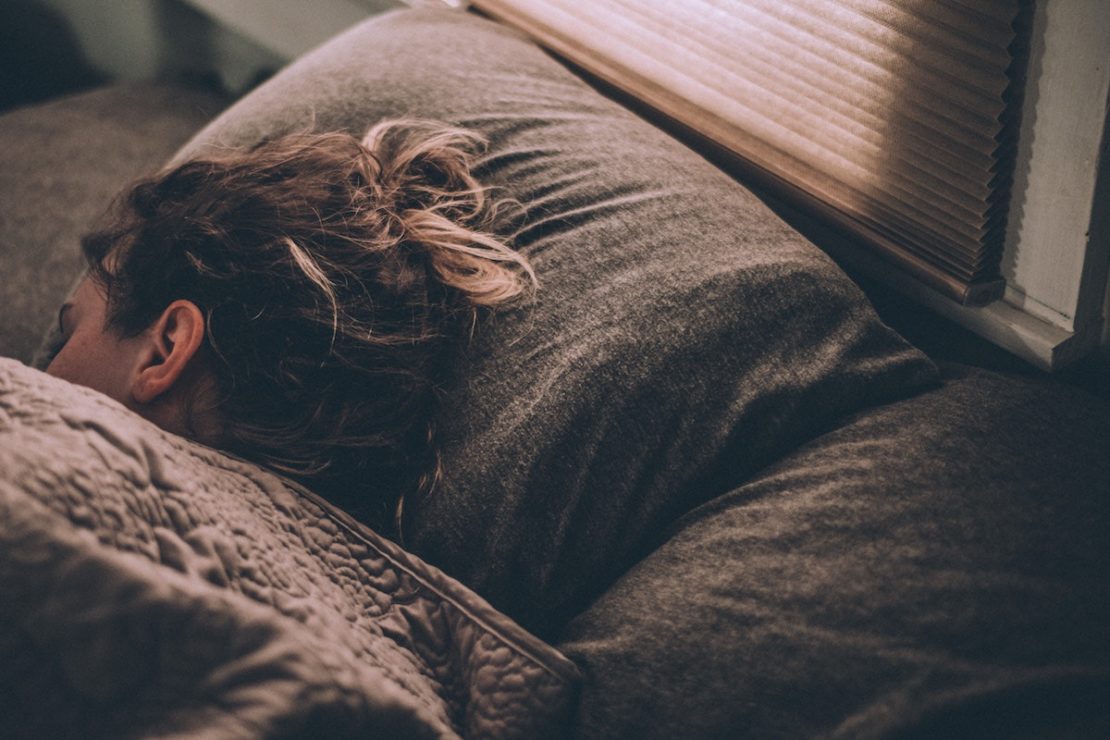 Beauty rest is more than a turn of phrase. Anyone who has suffered from chronic insomnia or disturbed sleep is well aware of the detrimental effects of sleep deprivation. Lack of sleep not only compromises your outward appearance. It wreaks havoc on your metabolism, mental alertness, emotional balance, and even memory (Albrecht & Ripperger, 2018). Sound sleep is vital for whole body health. Both modern science and ancient wellness systems, such as Ayurveda, underscore this truth.

The ancient ayurvedic sages placed sound sleep at such a high premium that it was deemed an essential pillar of health, along with good digestion and effective energy management. In fact, the Charaka Samhita, one of Ayurveda’s pivotal classical texts, states that by upholding these three pillars, the strength of body and good complexion are preserved even until the very end of one’s lifespan (Dash, 2014).

Although you may intuitively know this, stress, schedules, and a number of other factors may interfere with getting the rest you need. This article will explore lifestyle hacks for sound sleep so that you can wake up more rested, alert, beautiful, and ready to take on the day.

The Science of Sleep

In addition to the ancient wisdom of Ayurveda, there is mounting scientific evidence to support the value of sound sleep. In fact, not so long ago, an entirely new bodily system that plays a key role in sleep was discovered. It is known as the glymphatic system, and it functions as a waste clearance mechanism, removing metabolic and protein wastes from the brain while you sleep. This curious system may also be involved in distributing nutrients, such as amino acids, lipids, and glucose to brain cells (Jessen et al., 2015). The interesting thing about the glymphatic system is that it only functions while we sleep. Sleep that is regular, ample in quantity, and timed with the natural rhythms of dark and light, keeps this waste clearance system functioning as it should. The result? Sleep that feels restful, as well as clear thinking and a healthier nervous system. When the glymphatic process is disturbed, the consequences may be as serious as exacerbated neurological disease (Albrecht & Ripperger, 2018).

Of course, getting sleep of adequate quantity and quality is easier said than done. If you find that your sleep is less than stellar, these five lifestyle hacks will help put you back on track. 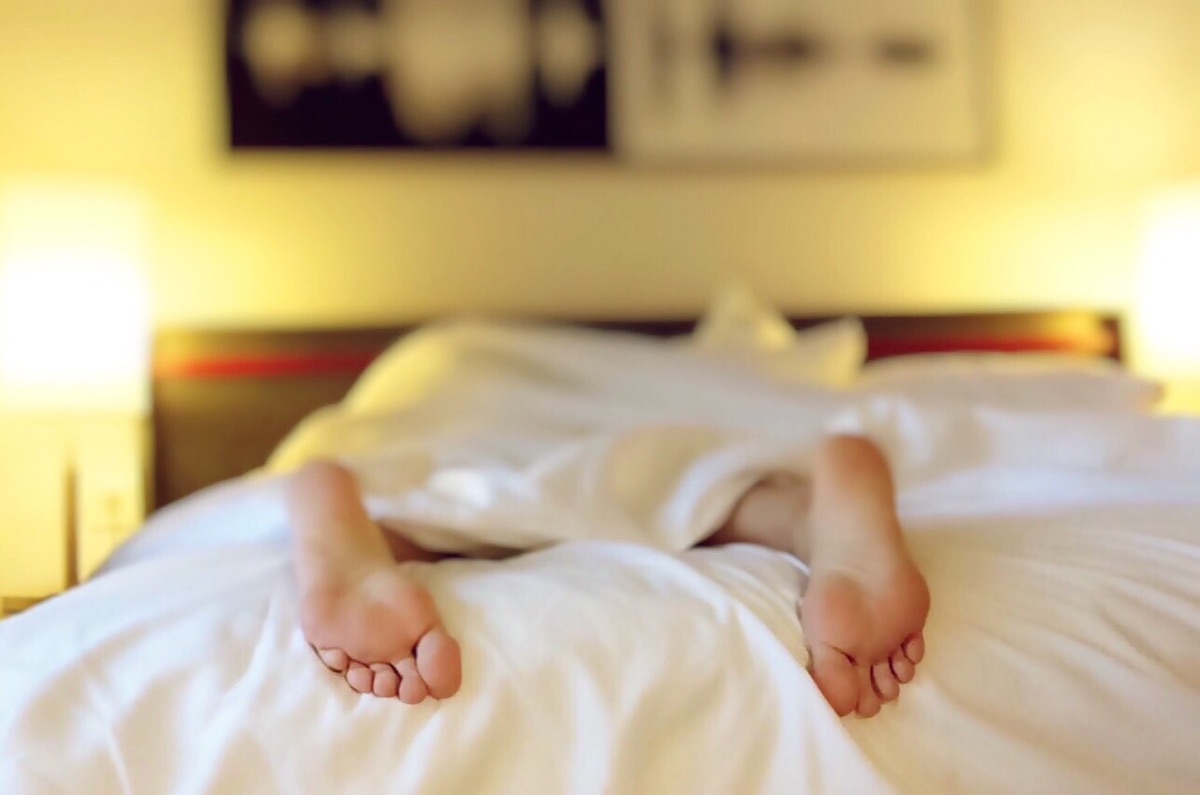 One trick to attaining sound sleep is regularity. In Ayurveda, restless sleep and insomnia are often linked to an imbalance in vata dosha, which is associated with the wind element, as well as movement (Frawley, 2000). Vata dosha is easily imbalanced by changes in routine. Irregular lifestyle patterns such as frequent travel and irregular work schedules tend to throw vata dosha out of balance, resulting in sleep troubles. Regular sleeping times and good sleep hygiene (such as the sound sleep hacks describes in this article) help soothe the nervous system and keep vata dosha pacified and less likely to wreak havoc on sleep patterns.

The ayurvedic teachings around the importance of sleep routines correspond with the concept of circadian rhythms. Circadian rhythms are the natural rhythms of the body and correlate to the cycles of day and night. It is natural to sleep at night and to awaken with the light of day. When circadian rhythms are thrown out of whack, a number of health issues may ensue, such as being at a higher risk for developing heart disease, diabetes, metabolic syndrome, and certain types of cancer (Palanisamy, 2015).

According to Ayurveda, not everyone needs the same exact amount of sleep. You may have noticed this for yourself anecdotally. Vata types tend to need the most sleep, kaphas the least, and pitta types fall somewhere in the middle. Kapha types may also benefit from getting up a bit earlier; too much sleep exacerbates their naturally slower constitutions, causing sluggishness and lethargy. On the other hand, the more delicate nervous systems of vata types require maximum rest and rejuvenation. It is especially important that ravenous pittas are not up in the middle of the night, as they are particularly prone to late night eating, which only leads to an imbalance in their digestion, liver, and sleep patterns. Ayurveda teaches that “early to bed and early to rise” is best for everyone. This means that getting up around sunrise is ideal for all, with slight variations depending on one’s constitutional type (Svoboda, 2010). 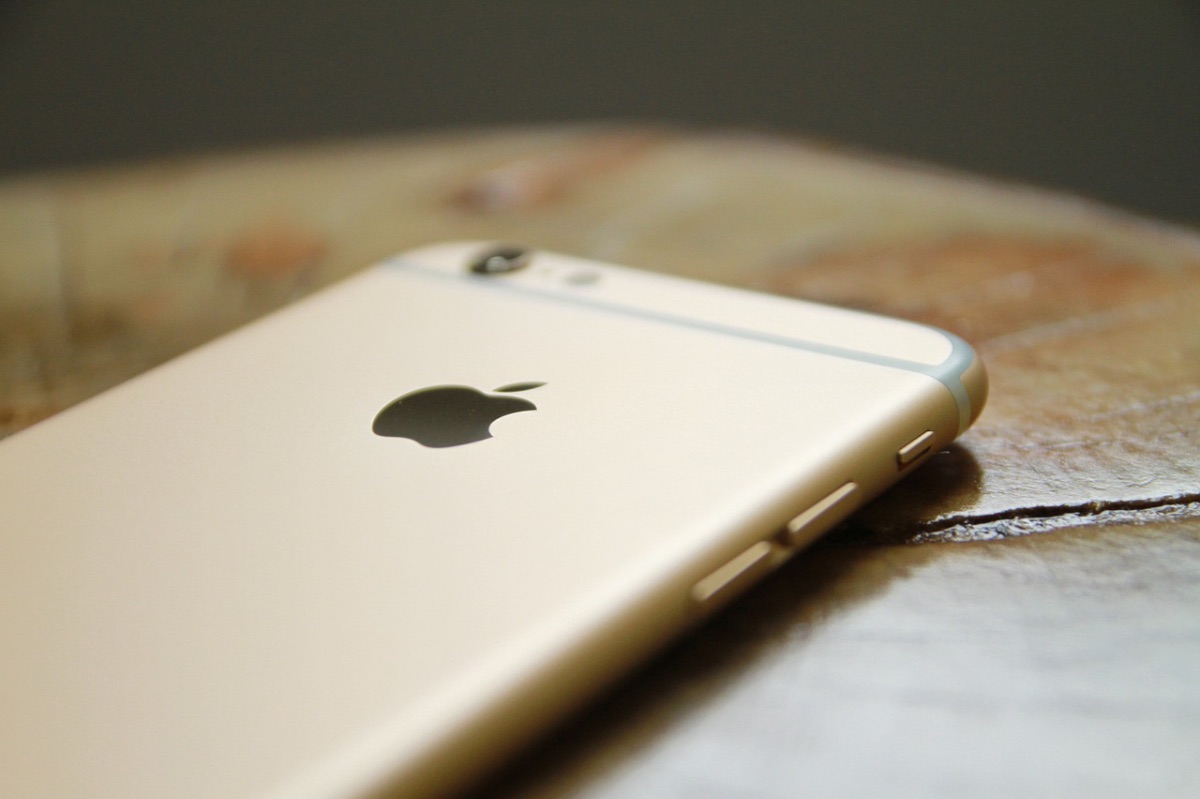 This lifestyle hack for sound sleep is a game changer. It’s important to give your nervous system time to unwind before bedtime. Just like stopping a fast moving car, it’s not easy to slam on the brakes when you are traveling 100 miles per hour. The same is true for your nervous system. Easing, rather than crashing, into to sleep is generally far more effective.

Why? Melatonin is the reason. Melatonin is important for immune function and sleep quality. Melatonin is released by the pineal gland, and it plays a major role in signaling your nervous system to calm down. Interestingly enough, light exposure, particularly the blue light emitted by screens, prevents the release of melatonin. Therefore, the more time you can spend in dark or dim lighting before bed, the better your chances of falling gently into a sound sleep. Using lamps and area lights in the evening, rather than bright overhead lights is helpful. Also, light bulbs with an orange or red hue are preferable to white or bluish light. Apps, such as f.lux, that adjust your computer screen light throughout the day are useful as well. Ideally, turning away from computer screens and phones in the late evening, and instead of picking up a book, taking a hot bath, or doing other relaxing screen-free activities will help send your nervous system the message to calm down and prepare for sleep (Palanisamy, 2015). 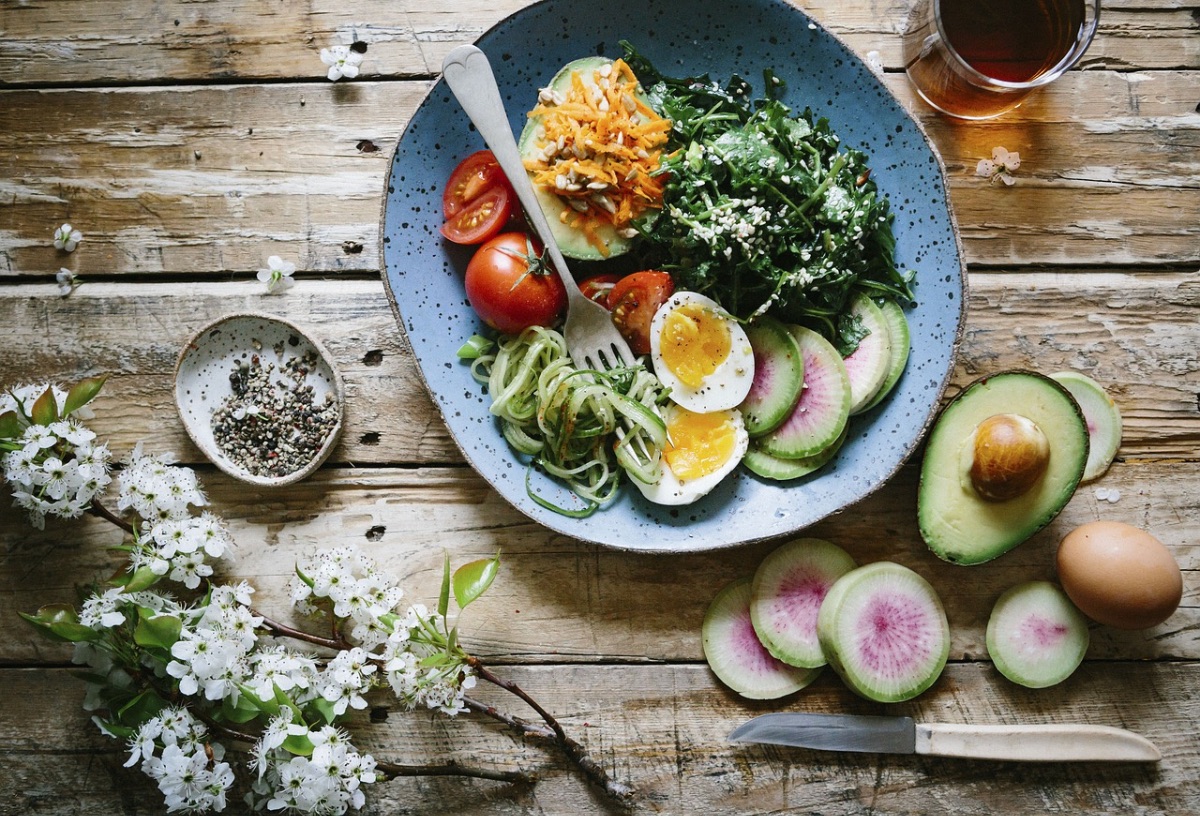 Refraining from late night snacking will not only assist with weight management, but this healthy habit also helps you sleep better. Even your fat cells have a circadian rhythm. Research shows that eating less at night can assist in weight loss (Garaulet et al., 2013). This is consistent with the ayurvedic recommendation to have your largest meal at lunchtime, which is attributed to the ayurvedic teaching that one’s agni, or digestive fire, is strongest at midday. Also, by eating lightly at night, you give your body the chance to focus on detoxification and restoration during the night, rather than digestion. Furthermore, by normalizing your metabolic circadian rhythms, you have a better chance at bringing all of your circadian rhythms into balance, lining up patterns of eating, sleeping, and waking (Palanisamy, 2015).

Though hot summer days may leave you sleepy, our best sleep is attained in a slightly cool environment. The ideal recommended room temperature ranges from 60 to 66 degrees Fahrenheit with pajamas and in the mid-80’s without pajamas and just a sheet as covering (Onin, Bailey & Parquet, 1994). Furthermore, keeping a cool head may especially help with sound sleep. This is a rather amusing sound sleep hack. One study showed that sleep quality was significantly improved in 16 males who were subjected to head and neck cooling in a hot environment (Lan et al., 2018). If you have the option to regulate your bedroom’s temperature, keeping it on the cool side may help you rest more thoroughly. If not, consider a cool shower or applying a cool washcloth to the head and neck before bed for a soothing, soporific effect.

There are a plethora of herbs that can assist in getting a good night’s rest. Ashwagandha, with its nourishing, tonifying capacities is a great place to start. This starchy root is an ayurvedic classic for all types of nervous system disturbances. Ashwagandha is soothing for a range of imbalances including insomnia, fatigue, general debility, tissue deficiency, poor eyesight, and anxiety. Ashwagandha may not correct sleep immediately, but due to its nourishing and stabilizing effects on the nervous system, it will help normalize sleep cycles over time. One great thing about ashwagandha is that it is safe to take in rather large doses—anywhere from 1-9 grams per day (Dass, 2013). To maximize the root’s strengthening and soothing effects, it is helpful to consume in powdered form. For ease of consumption, you can mix powdered ashwagandha into hot water, hot milk, or a hearty warm grain cereal. 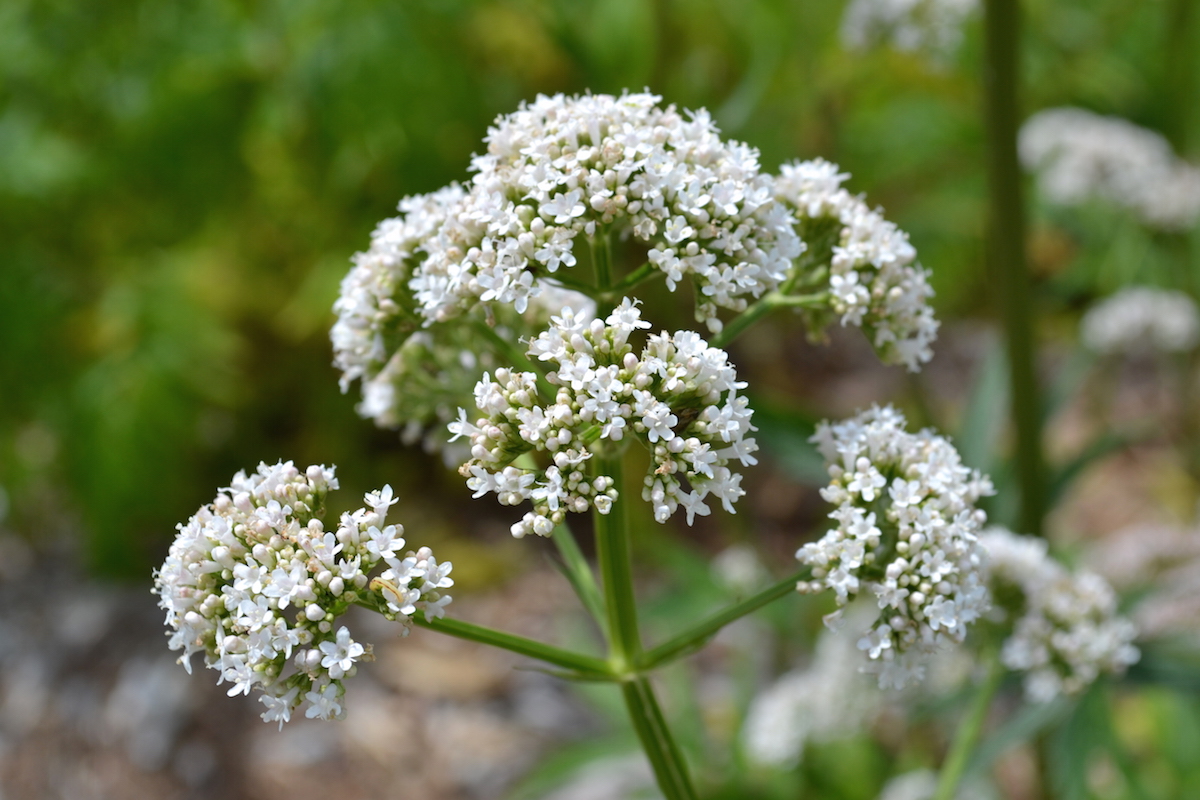 If you are looking for an herb with potent sedative effects, valerian may be for you. Valerian is a powerful sleep aid and also has the ability to soothe anxiety and relax tense muscles. Since valerian can cause drowsiness, it is best to take only in the evenings, about 30 to 60 minutes before bed. This strong smelling root can be taken as a liquid extract or in dried powdered form (generally best swallowed in capsules). The suggested dosage is 3-9 grams of dried whole root and 2-6 mL of liquid extract (Mills & Bone, 2000). Some ayurvedic practitioners caution against long-term use of valerian, as it can exacerbate depression, melancholy, and mental lethargy (Dass, 2013). Also, oddly enough, some people find that valerian has a heating and stimulating effect rather than a sedative effect. This is a simple testament to the ayurvedic tenant that nothing is right for everyone. Always listen to your body and be willing to adapt your herbal supports based on your own felt experience.

Whereas ashwagandha and valerian are both warm and somewhat heavy herbs, skullcap is light, bitter, and cool. However, it is also a great nervous system soother. Skullcap is classically used as support for a host of imbalances including nervous tension, stress, anxiety, premenstrual syndrome, tremors, and addiction. For vata types who require deep nervous system nourishment, it can be combined with heaver herbs such as ashwagandha or valerian. Though skullcap is helpful as a sound sleep hack, it can also be taken during the day to calm a stressed mind or jittery nervous system. As a tincture, you can take 30-60 drops up to three times per day or 1-9 grams of the dried aerial portion (Dass, 2013).

If getting your zzz’s is a challenge, with the help of these sound sleep hacks, we hope you will find your way back to restful and rejuvenating sleep.

Albrecht, U., & Ripperger, J.A. (2018). Circadian clocks and sleep: Impact of rhythmic metabolism and waste clearance on the brain. Retrieved from https://www.ncbi.nlm.nih.gov/pubmed/30274603