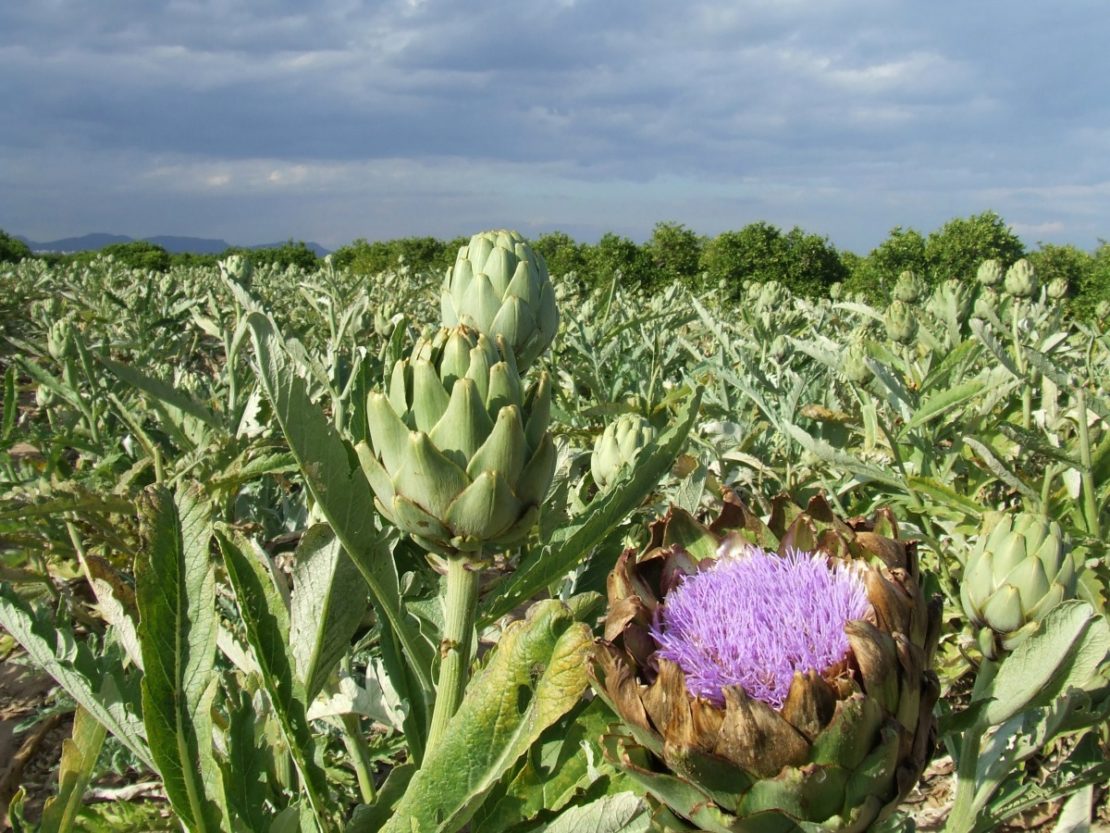 Human beings are part of the natural environment. We pass through the same natural and seasonal cycles that affect other living beings—animals, plants, and ecosystems. This is reflected in traditional healing systems the world over. Western herbalism has a long history of practices and remedies that are determined by the season, and older systems like Ayurveda and traditional Chinese medicine (TCM) also consider seasonal cycles to be important. These systems reflect the idea that the microcosm (in this case, the human being) is a representation of the macrocosm (the natural world), even in tropical locations that don’t experience the same change of seasons as in temperate climates.

The Season of Winter

Winter is a season of cold, dampness, and darkness. It is the time of year that most animals (including human beings) slow down, go within, and reserve our resources. For people who evolved in temperate climates, the metabolism and digestive process may naturally slow down so that we can store fat (and energy). This is one way humans survived through harsh seasons, when less food was available.

One result of this evolutionary process is that we may find our bodies (especially our digestive processes) in need of a “jump start” once the snow begins to thaw, the days become longer, and we are ready to emerge into spring. Herbalists have observed this phenomenon for ages, and have documented quite a bit about the energetics at work, as well as ways to maintain physiological balance as we move from winter in the spring. 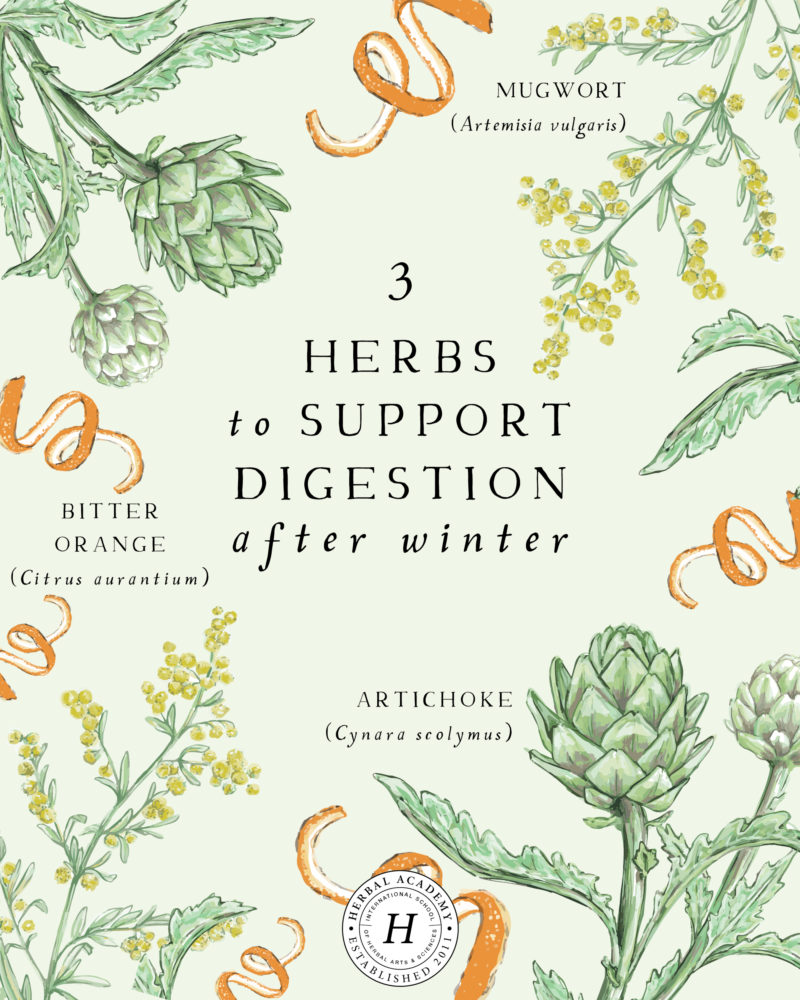 The Season of Spring

In TCM, spring is represented by the energy of wood—this is the energy that is reflected by the function of the Liver and Gallbladder. Obviously, these organs affect the wellness and function of our digestive systems all year long, but according to TCM, it is in the spring that they really kick into gear and are most active. In the spring, people with chronic digestive issues may experience more imbalance (Pitchford, 2002).

This wisdom is in wonderful accordance with Western herbal practice, where we have traditionally turned to the first (often bitter) herbs of spring to detoxify the body and energize the digestive system after months of eating heavier foods (Bellebuono, 2012). For example, in the Southern US where I live, “poke salat” (the cooked young leaves of the potent Phytolacca americana, potentially toxic if not prepared carefully) was once a popular way to detoxify the body and stimulate the liver in early spring; dandelion greens continue to be popular as a spring bitter. In fact, I generally suggest more food-like herbs to stimulate healthy digestion as we move from winter to spring.

There are many herbs that can support us in making this transition from winter to spring, but today, I’d like to share just a few of my favorite herbs to support digestion during this time of the year. 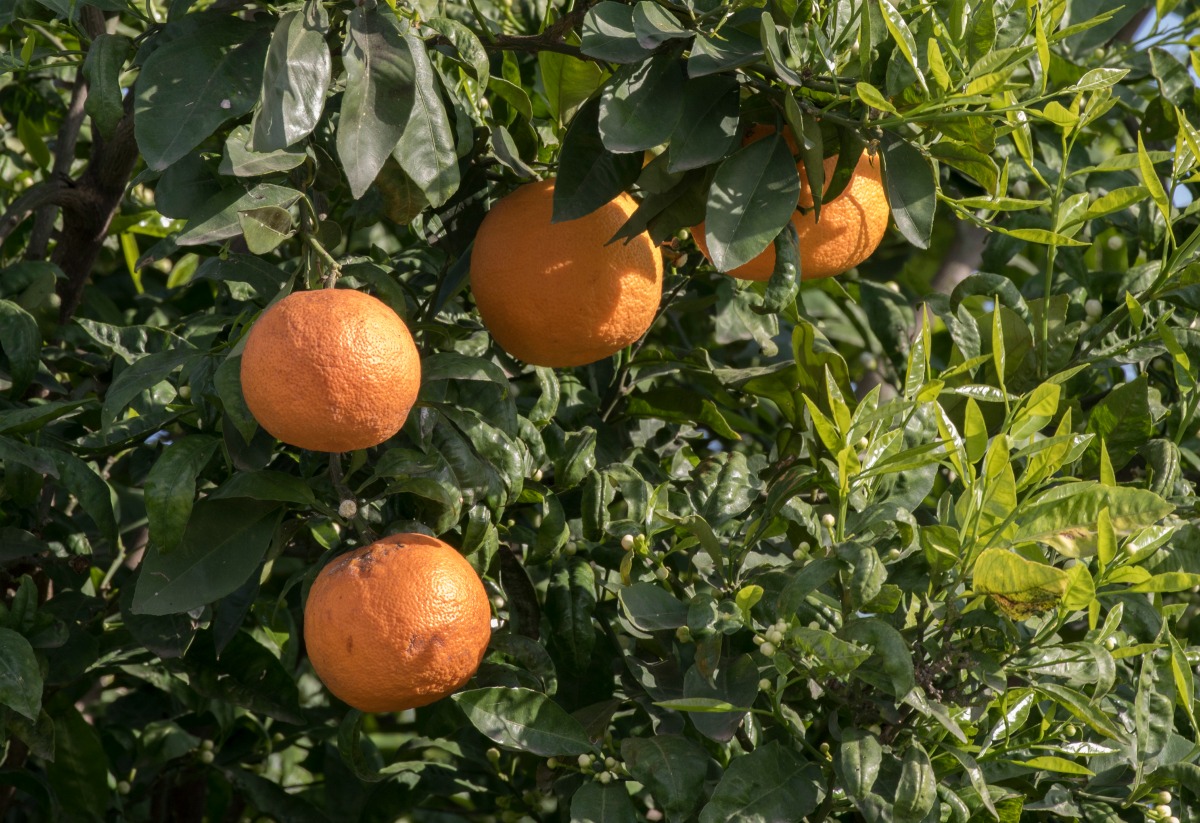 Three Herbs to Support Digestion After a Long Winter

There are actually two types of oranges that are used in Western herbalism—bitter (Citrus aurantium) and sweet (Citrus dulcis). The fresh or dried outer peel of both these fruits (not the white inner peel) has a long tradition of use. A look at historic texts and pharmacopoeias will show that until very recently, bitter orange in particular has primarily been considered a digestive aid. Its warmth and its moving, aromatic qualities make it a lovely carminative used to stimulate appetite and ease digestion. Bitter orange also acts on the liver and gallbladder as a bitter tonic and mild choleretic, helping the body to metabolize the heavier and fattier foods consumed during a long, cold winter (Mars, 2009).

Interestingly, modern research on orange peel has focused less on digestive support and more on the actions of a constituent called synephrine. This alkaloid shares a chemical and functional similarity to epinephrine—also known as adrenaline. For this reason, the isolated chemical has been marketed toward those seeking weight loss, especially as the safety of other herbs used to boost metabolism (such as Ephedra) has come into question (Ulbricht, 2010). Within the “whole plant” context of orange peel (which also contains essential oils and flavonoids, among other phytochemicals), synephrine provides a gentle, stimulating push to the digestive and metabolic systems that is appropriate for the season.

Like its relative grapefruit, bitter orange has some potential for interaction with drugs metabolized through the CYP450 enzyme system, so caution should be used for those taking such medications.

Orange is also the single source of two important oils used in aromatherapy: neroli (distilled from the flowers of C. aurantium) and bergamot (distilled from the fruit of C. bergamia), which are widely used to act on the nervous and digestive systems (Ulbricht, 2010). It also makes an incredible marmalade. One of my favorite teachers, James Snow, describes it as an herb that ushers in the qualities of joy and communication. I find orange peel to be a great companion for our emergence from the cold darkness of winter into the warmth and light of spring. 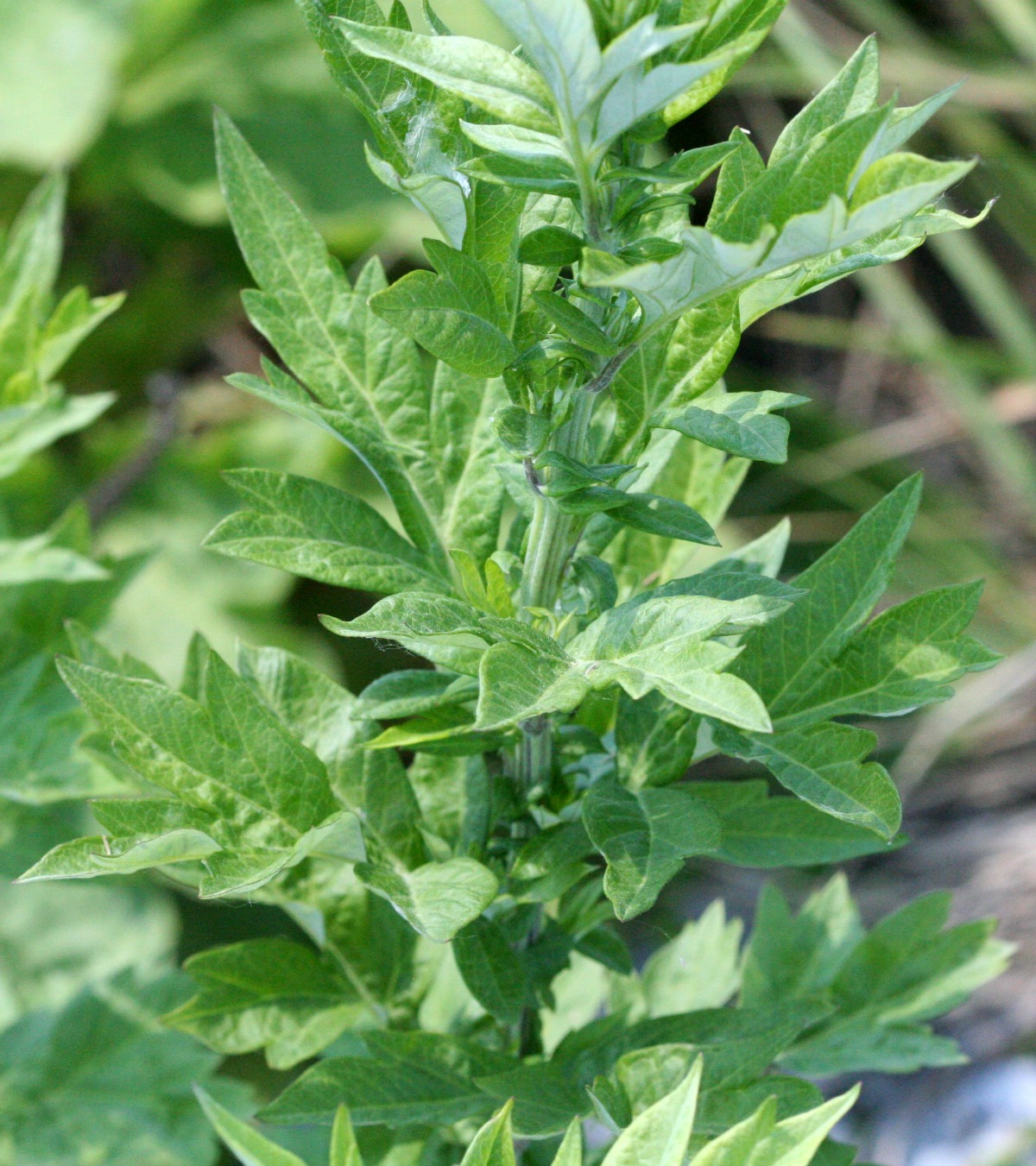 Mugwort (Artemisia vulgaris) has an wide range of uses. Historically, herbalists have found the aerial parts of the plant helpful to support people suffering from everything from stalled menses to palsy, and fever to jaundice (Grieve, 1931). Growing in abundant stands in many areas, it has qualities that make it a wonderful herb to support post-winter digestion.

Mugwort is a choleretic, cholagogue, and slightly aromatic bitter tonic that also is warm and moving to a sluggish or congested gastrointestinal tract (Wood, 2008). In its cottony, dried leaf form, mugwort is also known in TCM as moxa, and is burned by acupuncturists over meridian points to stimulate the movement of qi.

Mugwort is a good choice to support fat metabolism as the body moves away from the seasonal tendency to store lipids. The late herbalist Michael Moore may well have described its usefulness best in his Medicinal Plants of the Pacific West: “If you wake up in the morning with a grey sheet over your psyche, your head hurts in the front, your mouth tastes like a three-day old Greek salad, your hemorrhoids are aching, and you crave things like pizza, potato chips, or fry bread take the infusion once at night for a couple of weeks” (Moore, cited by Shepherd, 2014). You’ll not want to overdo it, however, because large amounts of mugwort can induce nausea and vomiting (Grieve, 1931). 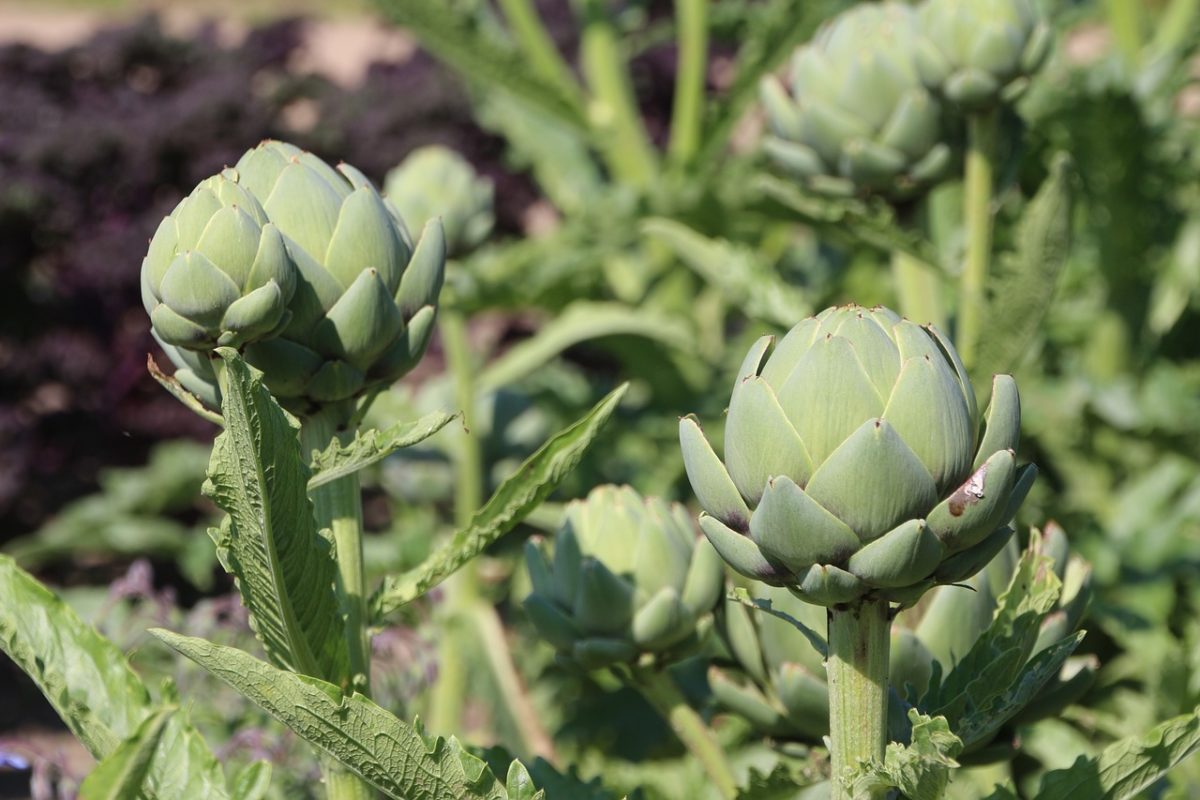 The leaves of the globe artichoke, Cynara scolymus, have a very different quality than that of the aromatic herbs mentioned so far. While it’s actually pretty similar to mugwort in its effect on the body, artichoke is cooling rather than warming, and moderately dry in its energetics. In Western herbalism, it was traditionally used when digestion was slow or painful or when gentle laxative action (a characteristic feature of springtime purges) was called for (Phillips & Foy, 1990).

A relative of milk thistle, artichoke also has an affinity for the liver. It is not only choleretic and hepatoprotective, but also is hepatoregenerative, which means that it can help restore both function and tissue. Artichoke is also supportive of digestion because it is a bitter tonic, cholagogue, aperient, and one of relatively few cooling carminative herbs. There is also evidence that artichoke lowers blood cholesterol levels (Mills & Bone, 2005). Combined with aromatic and warming carminatives, artichoke makes an excellent spring digestive tonic.

As you begin to emerge from your winter hibernation, take note of the herbs that are beginning to emerge from the warming earth as well. Many of them may well be helpful to help get your digestive juices flowing, support and strengthen your liver function, and help you transition joyfully into spring.

And don’t forget to keep an eye out at your local farmers market or supermarket. Mugwort soba noodles aren’t difficult to find at health food stores, and even if you can’t find bitter oranges, a little orange zest added to tea or fruit salad is an easy way to incorporate plants that help give the digestive system a boost after the winter.

We’ve made it through another winter. Here’s to a happy, healthful spring! 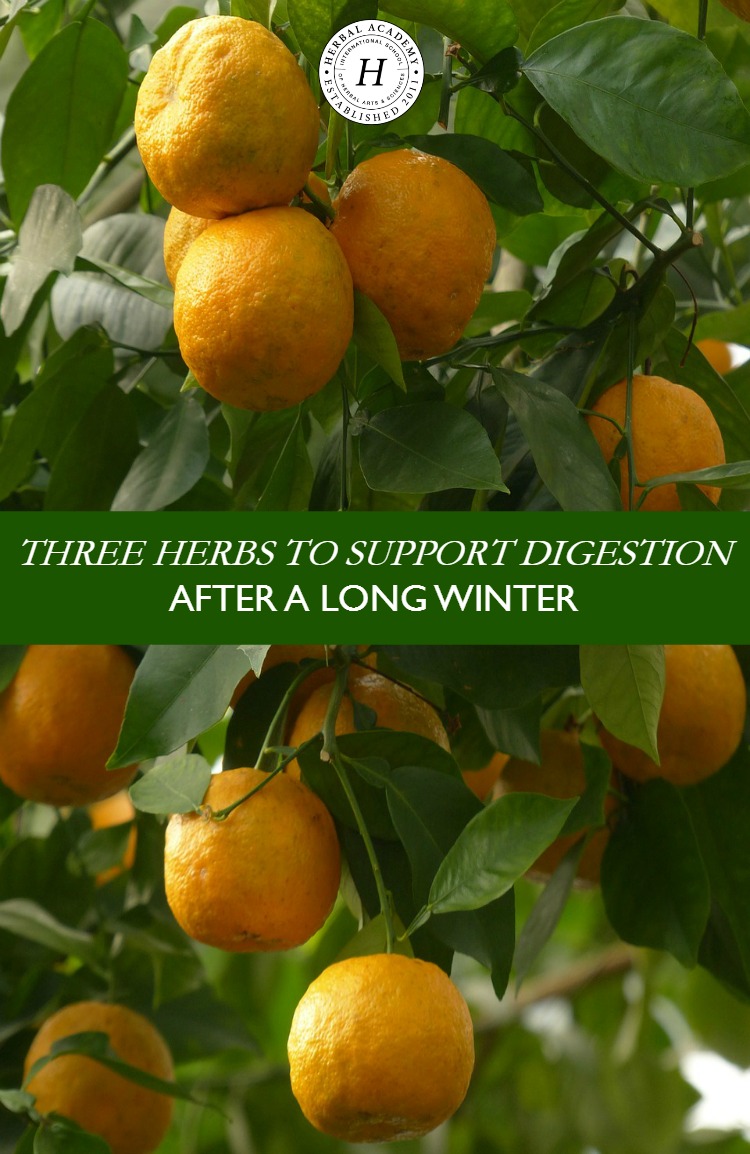