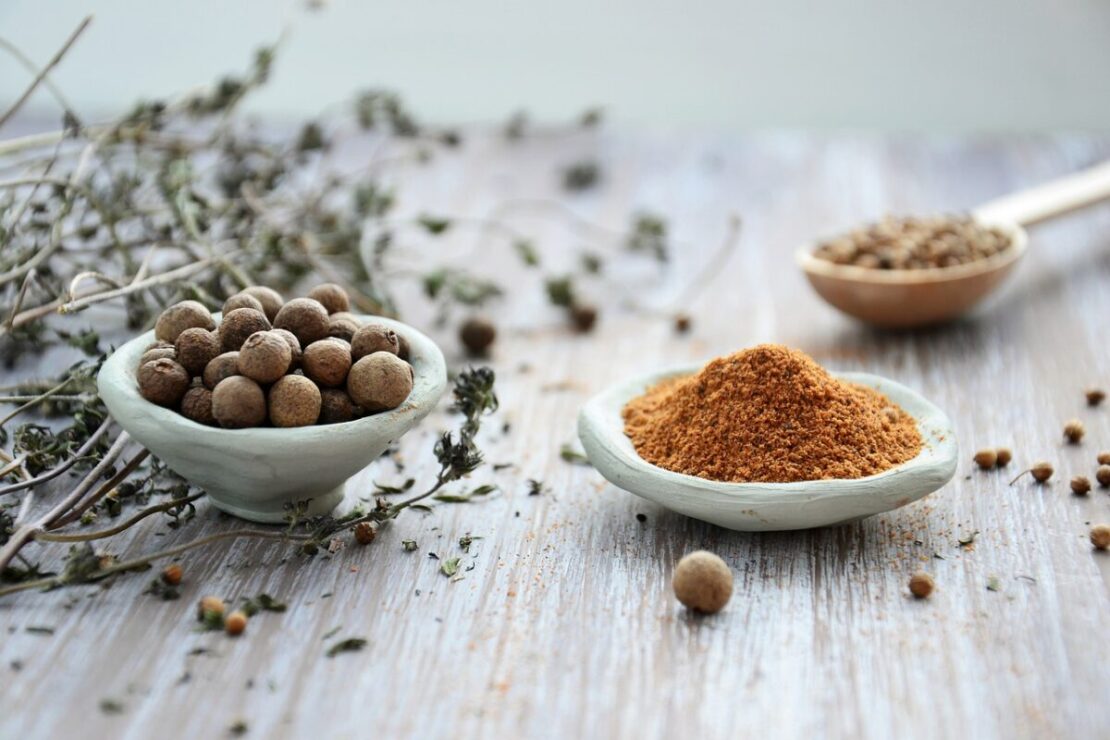 I adore autumn, and yet I find it a bittersweet time of year, being the harbinger of the cold, dark days of winter. Whether or not you welcome the transition from the heat of summer to the cool of autumn and winter, adjusting your foods, spices, and herbs to fit the season is one important way to attune yourself to nature and its rhythms. I find that immersing myself in the flavors, colors, and rituals of each season allows me to accept with greater grace the changes in light and temperature that autumn and winter bring. The fall harvest offers a wealth of delicious, comforting food choices, and the opportunity to enjoy seasonal foods with autumn spices.

Autumn Spices: What to Consider

It was difficult to pick just five autumn spices to feature in this article.  First of all, you don’t need to restrict yourself to just five spices for fall! My intent here is to offer a flavor profile to consider and to get you thinking about the energetics of autumn. What factors are there to consider when choosing spices for this season?

According to Ayurveda, fall is ruled by vata dosha. This is the time of year in which vata qualities—lightness, dryness, mobility, subtlety—become more pronounced. Especially for those with a vata constitution or vata imbalance, it is especially important to be mindful of vata qualities becoming excessive during this time of year. So what is the solution? Focus on warming, moist, nourishing, grounding foods, herbs, and spices. Cooking with autumn spices is a wonderful, tasty, and aromatic way to incorporate vata-pacification into your everyday routines. Let’s take a look at five autumn spices to incorporate into your herbal kitchen this season. 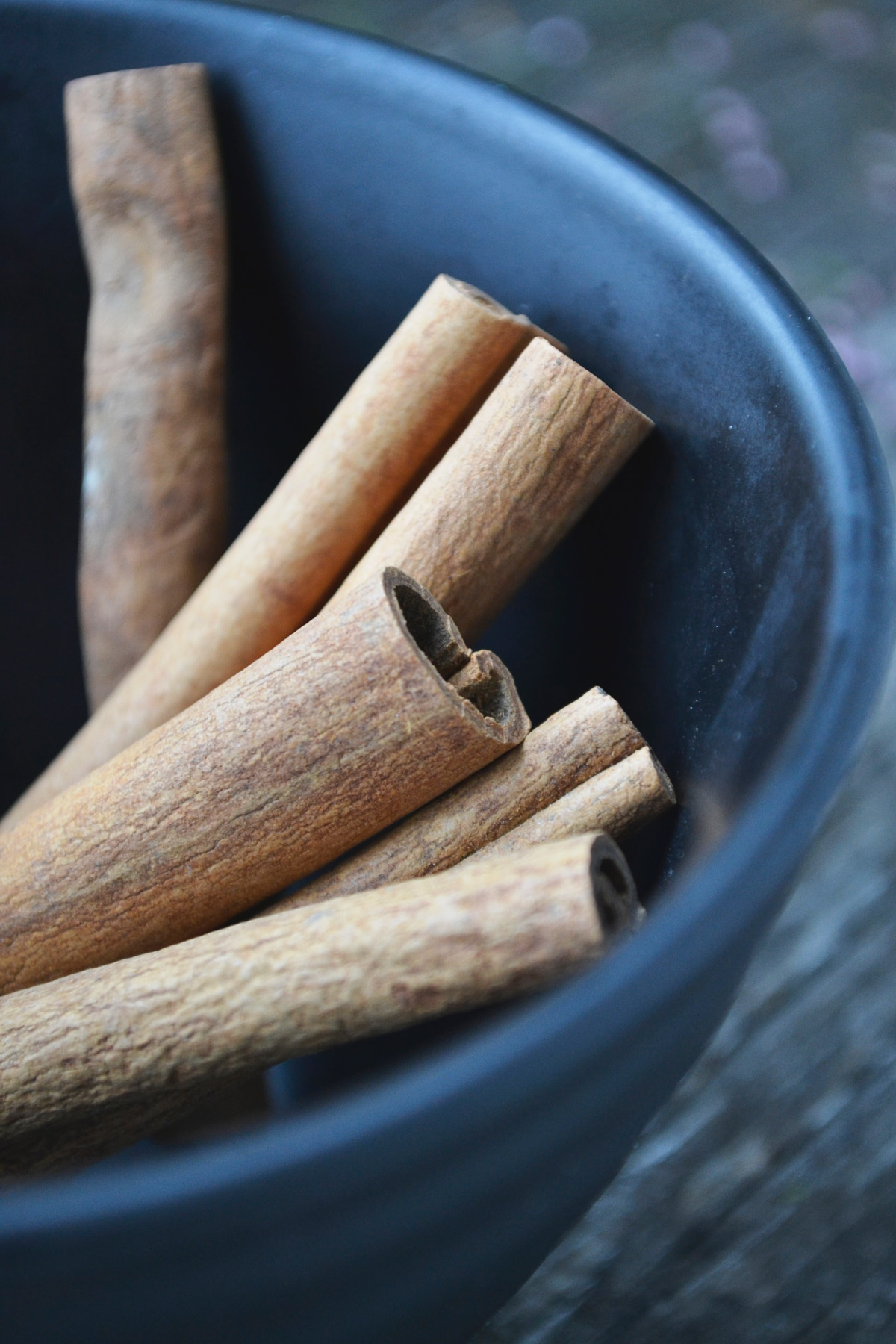 If you were asked to brainstorm autumn spices, what comes to mind for you? Cinnamon came readily to the top of my list! In fact, all of the masala chai and pumpkin pie spices, cinnamon being one, remind me of autumn. However, since I have written other Herbal Academy articles on masala chai, I wanted to branch out beyond those spices. That said, if autumn colors and cool mornings have you feeling cozy and craving comforting spices, you may want to check out this masala chai recipe or try out the apple and pumpkin pie spice blends in Make Your Own Apple and Pumpkin Pie Spice Blends. Making your own masala chai or other spice blends is a wonderful way to enjoy autumn spices.

Now, back to cinnamon…what is it about cinnamon that so perfectly complements autumn? We can begin by turning to its energetics. According to Ayurveda, cinnamon has a sweet taste, a heating energy, and is overall purifying (Lad & Lad, 1994). It is also considered slightly oily (balances the dryness of vata) and with its warm energy pacifies both vata and kapha doshas (Lad & Lad, 1994).

Cinnamon is also known for its ability to support blood sugar balance, circulation, and digestion, and is anti-inflammatory and antioxidant (Groves, 2016), making it a beneficial spice all year round.

Another appealing aspect of cinnamon is that it goes well with apples and other fall fruits. Apple pie with cinnamon is a classic. Or, you can try these masala fried apples in 3 Tips on Managing Vata Dosha During Autumn. These masala fried apples call for garam masala, which typically includes cinnamon. Or, you could simply substitute cinnamon and a pinch of black pepper. In addition, baked or stewed apples and pears with a dash of cinnamon is a great way to spice up a simple breakfast, dessert, or snack. Sometimes if I am in a time crunch, I will simply sprinkle a bit of cinnamon on a raw apple to add a warming, digestion-boosting element to the coldness and lightness of raw apple.

For a richer treat, you may want to check out these mouth-watering Cinnamon Creme Chocolate Hearts. 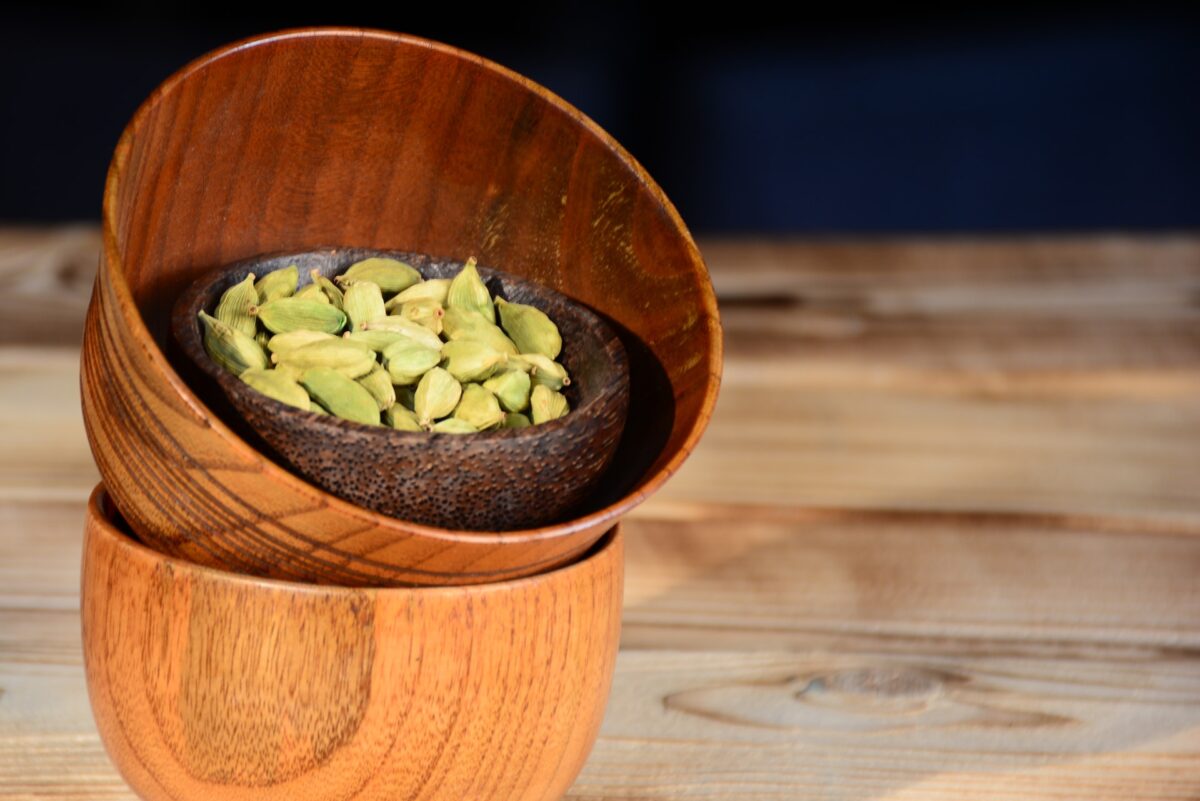 Though a little less popular in Western cuisine, cardamom is at the top of my list when it comes to cozy autumn spices. Cardamom is not cheap, but fortunately, a small pinch of this aromatic seed goes a long way.

Cardamom has a sweet and pungent taste, a warming energy, and an overall purifying effect (Dass, 2013). It is delightfully aromatic and has a clarifying, sattvic (purifying) effect on the mind. Also, as a well-known digestive herb, cardamom helps to balance the heaviness of dairy foods (Dass, 2013), making it a perfect accent for vanilla ice cream and a key ingredient in masala chai with milk and a variety of Indian sweets. Try dusting powdered cardamom on pumpkin pie, ice cream, hot chocolate, or even a pinch in your morning coffee. 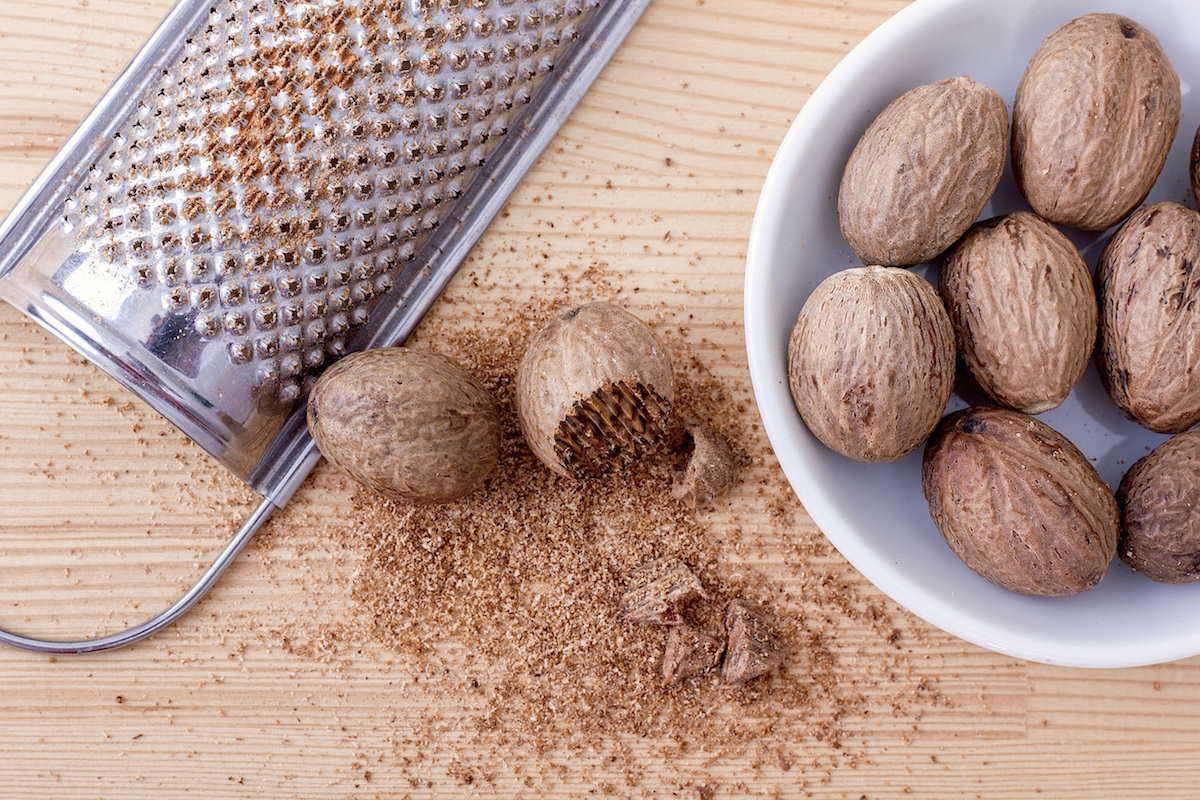 Nutmeg is a much-beloved spice used in eggnog, pies, and a variety of cool weather sweet treats. With a pungent taste and a heating energy, nutmeg calms vata and kapha doshas, making it a good addition to the kitchen herbalist’s autumn spice apothecary. In addition to being a tasty culinary spice, nutmeg is used to calm the mind and soothe vata issues (such as excess gas) in the digestive system (Dass, 2013).

To assist with sound sleep, add a pinch of freshly ground nutmeg to a cup of warm milk or golden milk. Just a tiny bit is plenty! The combination of nutmeg and sweetened milk reminds me a bit of eggnog, offering a sense of seasonal coziness. Ayurveda teaches that nutmeg can create a dull, or tamasic, quality if used over a long period of time, so it is better to avoid daily or long-term use. Also, nutmeg is contraindicated for pregnancy (Dass, 2013). 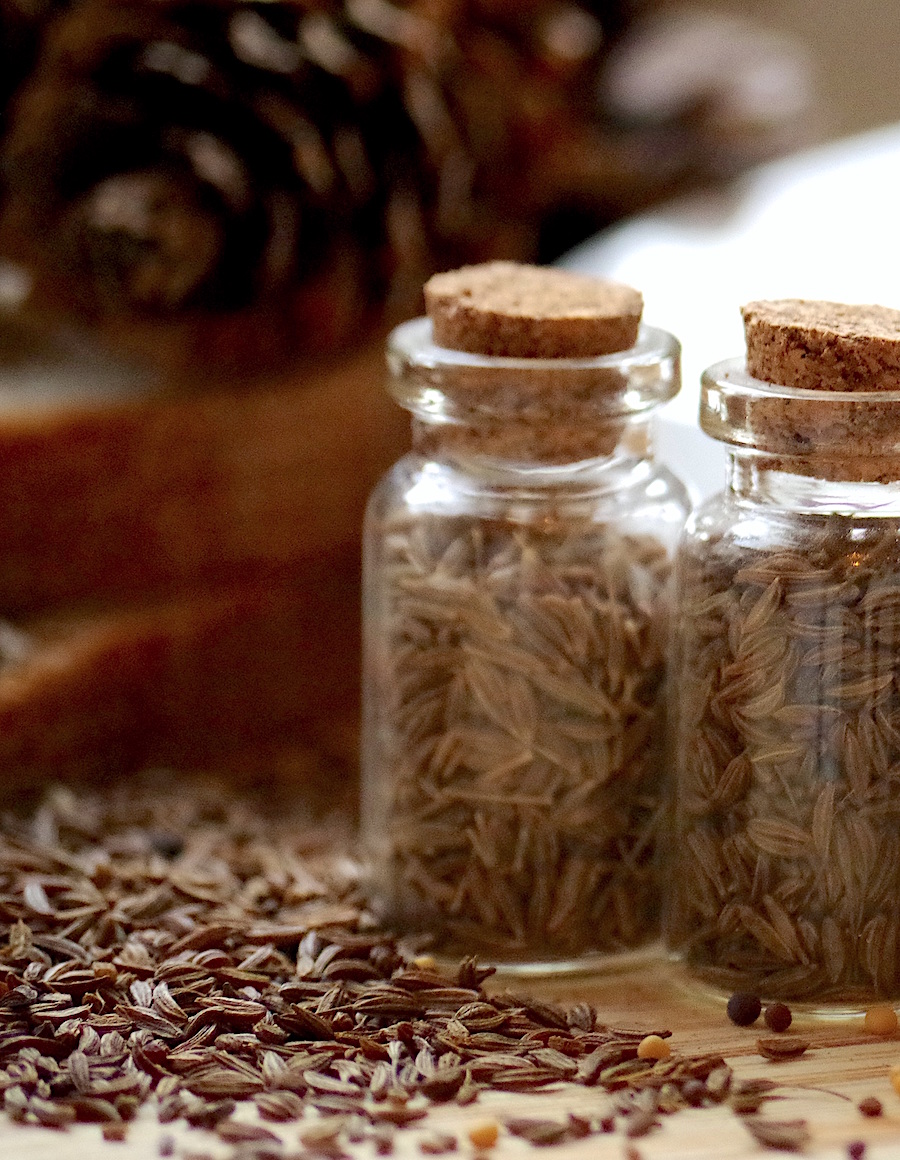 Cumin may be a slightly less obvious choice when it comes to autumn spices. However, cumin is versatile and widely used in a variety of dishes, and its usages and benefits make it a good fit as an autumn spice. Though mildly cooling, Ayurveda considers cumin to have a pungent (hot) and bitter taste and an overall purifying effect (Dass, 2013). Its ability to gently soothe digestion and to stimulate agni (digestive fire) without overheating pitta dosha make it a good choice as a digestive spice and cooking ingredient for all three doshas.

Remember, autumn is ruled by vata dosha, and sometimes vata issues such as excess gas, bloating, and indigestion show up more in the fall. Therefore, adding extra digestive spices to bolster and balance digestion is a good idea, especially in the fall. That said, during early autumn, the temperature outdoors may still be warm and there is a lingering presence of pitta dosha. For that reason, mildly cooling spices such as cumin can help round out the kitchen herbalist’s spice selection.

Cumin tends to go well with a variety of other culinary spices. You can add black pepper (Piper nigrum) fruit and/or turmeric (Curcuma longa) rhizome for a little extra heat. Or, coriander (Coriandrum sativum) augments the cooling effects of cumin. You can use cumin powder, or I like to cook with cumin seeds. When sauteeing your veggies, simply add a couple of teaspoons of cumin seeds to an oiled pan and heat gently until the cumin seeds start to pop. Then add your chopped and washed veggies of choice and other powdered spices as desired and cook until the veggies soften and a pleasant aroma is released. 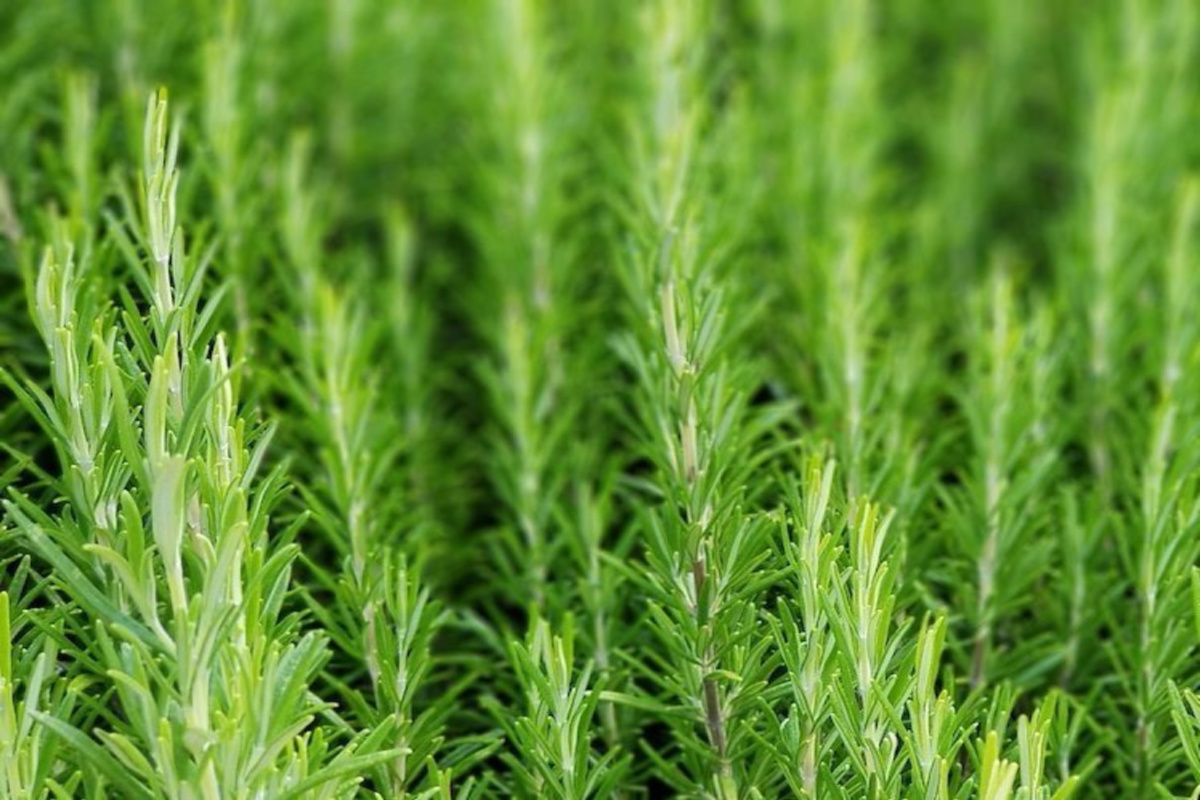 Rosemary is another wonderfully versatile herb that is great for savory recipes. This much-beloved herb is remarkably resilient and hardy in sunny, dry climates (think the Mediterranean and California) and is the perfect complement to roasted potatoes and roasted root veggies. Or, get adventuresome and try incorporating rosemary into desserts! I tried it out with this Sweet and Spicy Pumpkin Pie recipe. Rosemary ice cream is also quite lovely.

According to Ayurveda, rosemary has a sweet and astringent taste, a heating energy, and an overall purifying effect on the body (Lad & Lad, 1994). It pacifies vata and kapha doshas and may increase pitta dosha if consumed regularly and/or in large amounts (Lad & Lad, 1994). Rosemary is also well known for its ability to support memory (Groves, 2016). For this purpose, you can cook with it or simply inhale its refreshing aroma in the form of an essential oil, hydrosol, or fresh garden-plucked sprig.

When enjoying autumn spices, you needn’t limit your creativity to just five spices. However, I hope that this article will serve as a launching point for delicious concoctions in your herbal kitchen this fall. Be it roasted veggies, pumpkin pie, fried apples, or sweet and spicy teas, the transition from the heat of summer to the cooler months is the perfect time to get cozy with warming, aromatic, health-giving autumn spices. 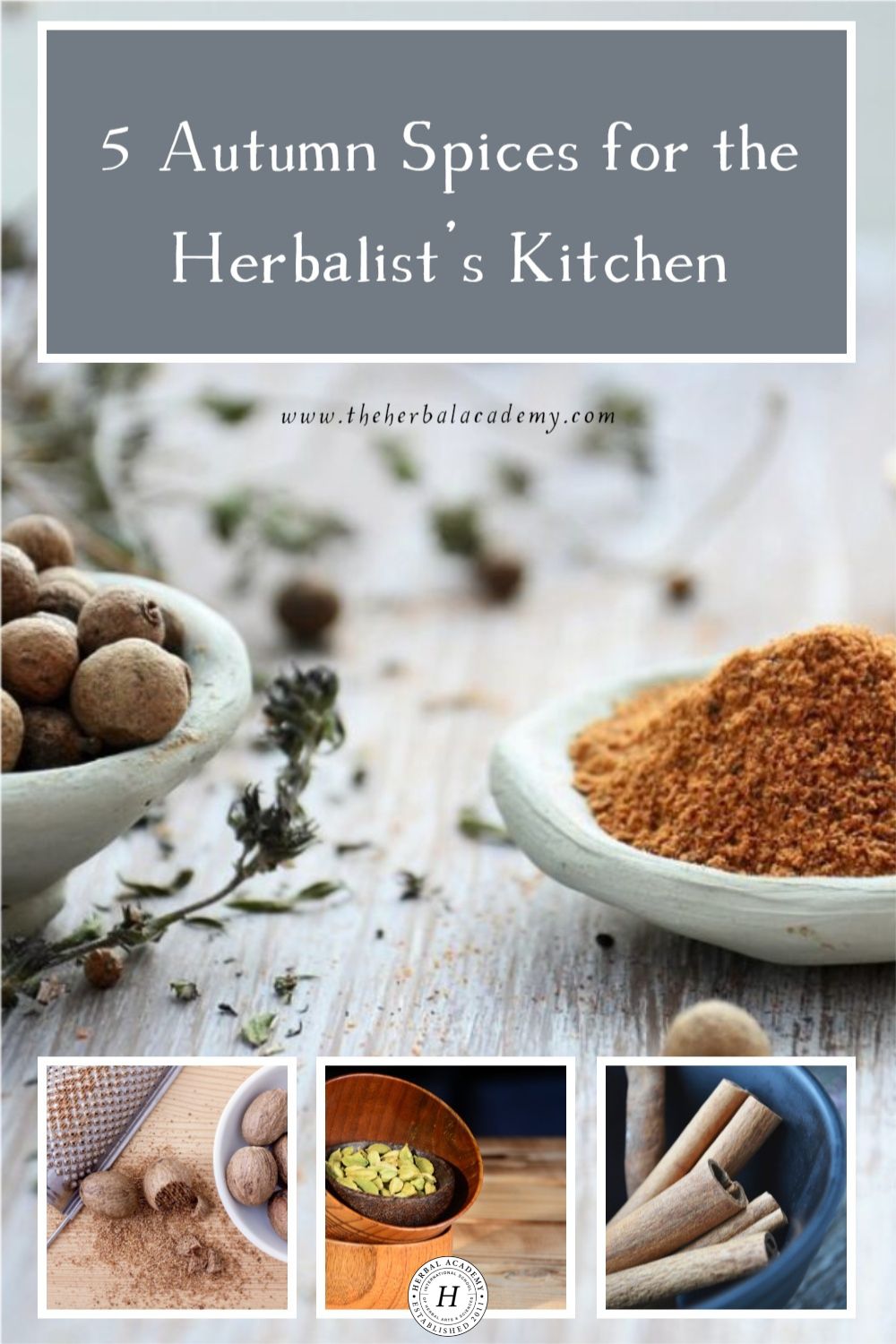