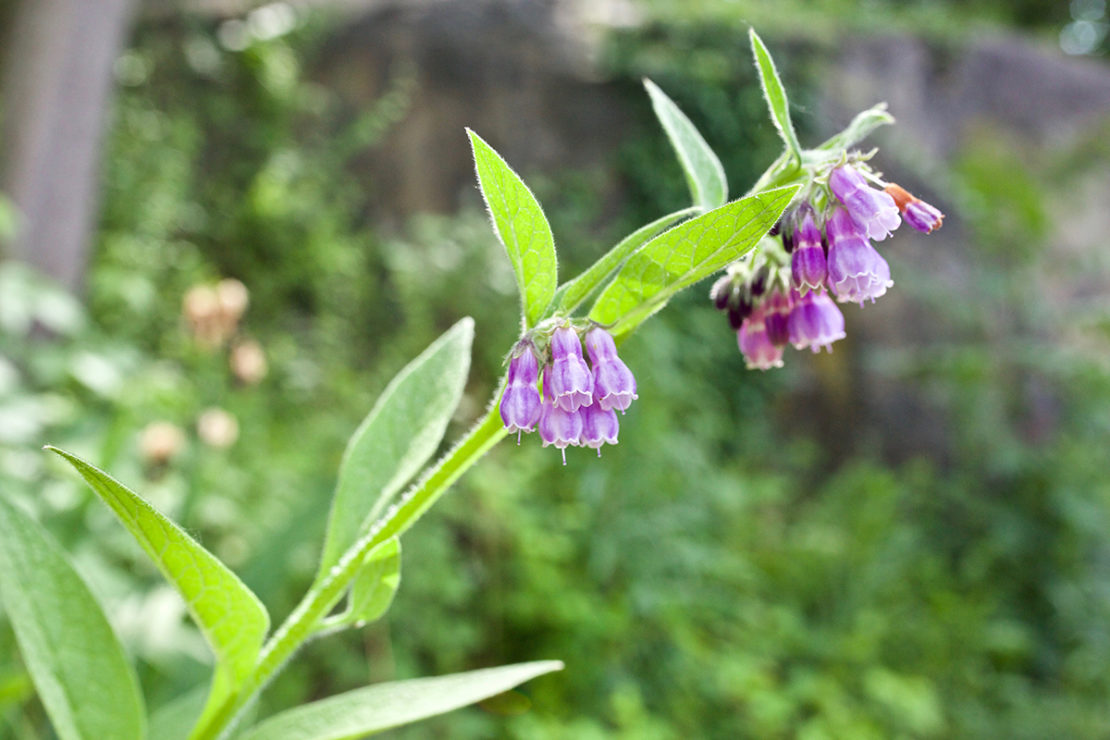 Can and should one use comfrey (Symphytum spp.) internally?

This is a question that herbalists have been debating since safety concerns were first brought to light regarding the potentially negative health effects associated with using comfrey internally.

While many herbalists have used comfrey internally for years with no known problems, others are heeding the warnings that stem from the conclusions of modern scientific studies on the internal use of comfrey.

In this article, we will look at the benefits of comfrey and its traditional uses, its constituents and their physiological effects in the body, how comfrey is typically used internally and externally, and the safety facts that herbalists need to be aware of when using comfrey. 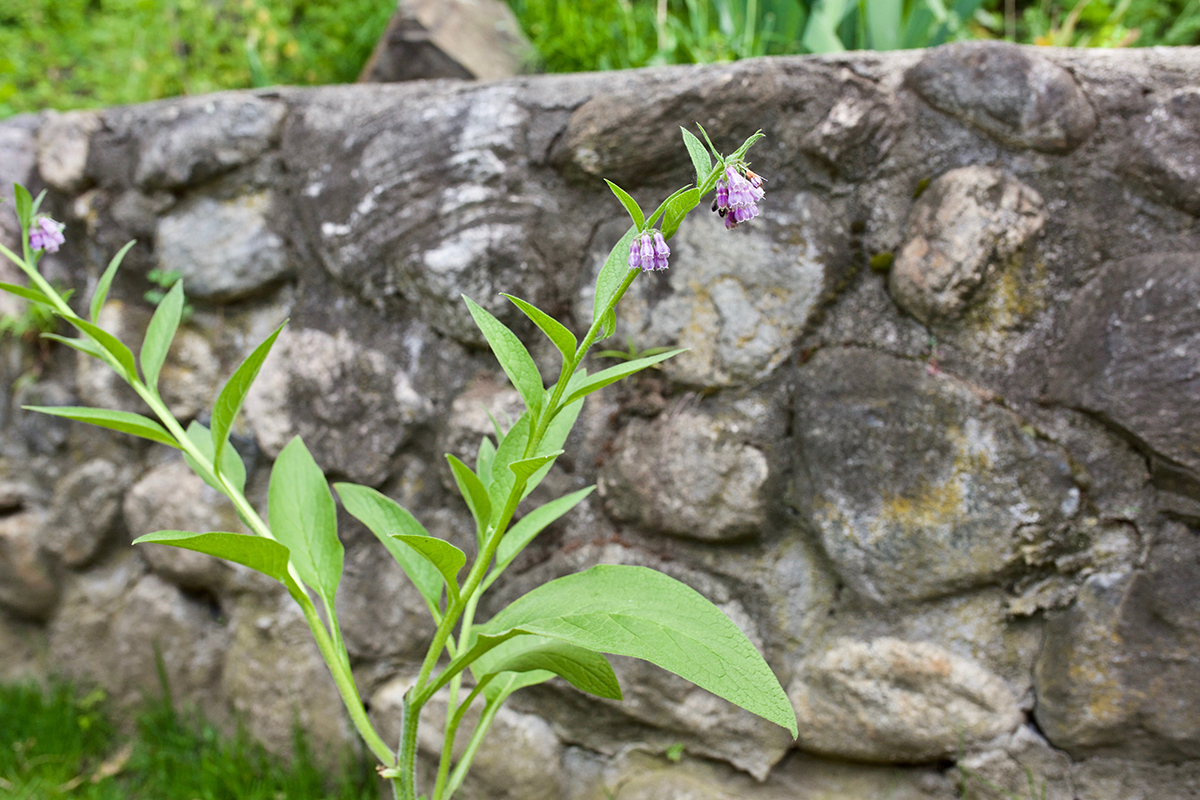 Comfrey’s leaf and root both have many beneficial qualities and uses.

Comfrey leaf is prized for its allantoin content, making it useful for tissue repair and cell regeneration. In fact, topical applications of comfrey leaf can stimulate such prolific cell regeneration that it’s not recommended for use on deep wounds as it can promote surface-level tissue repair before the inner parts of the wound heal, thus creating an environment for bacterial growth and potential infection.

Comfrey leaf is also high in tannins, giving it astringent and anti-inflammatory properties. It is often used to slow bleeding and drainage from tissues and to tighten and tone relaxed tissues. Comfrey is even believed to help decrease inflammation of tendon sheaths (Tilgner, 2018), supporting its use for joint sprains. 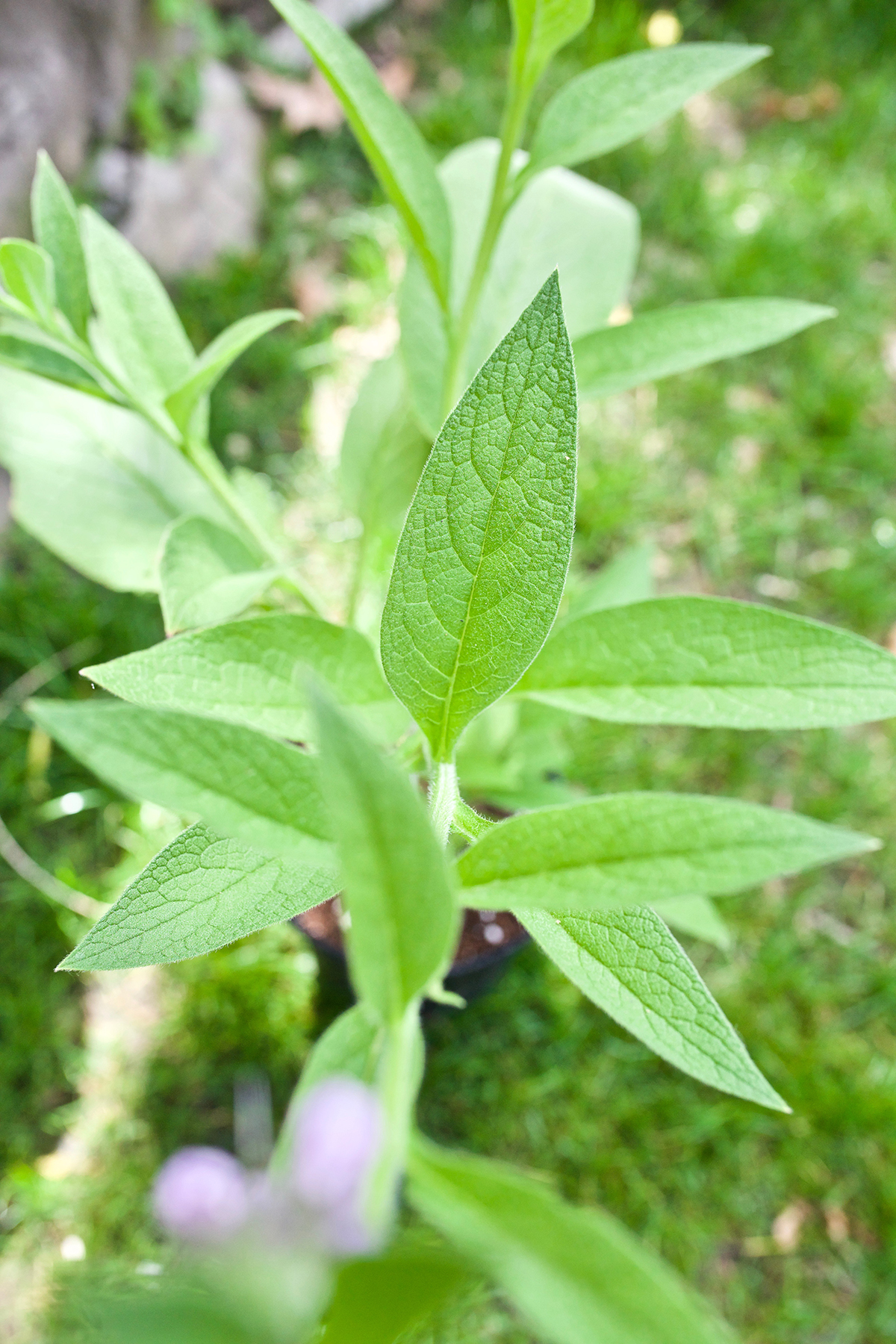 While both comfrey leaf and root are well known for their mucilage content and associated demulcent action, the root is more demulcent than the leaf. Because of this, it is often used to soothe hot, dry tissues, particularly those in the gastrointestinal, respiratory, and urinary tracts for digestive ulcers and diarrhea, coughs, or to ease symptoms associated with a urinary tract infection, respectively (Hoffmann, 2003; Tilgner, 2018).

Comfrey is sometimes used as a mild analgesic. Its analgesic action could be due to its alkaloid content, but it could also be due to the astringent, anti-inflammatory, and demulcent properties as well. A 2013 study concluded that a topical comfrey preparation probably eased osteoarthritis knee pain in a group of 220 participants (Cameron & Chrubasik, 2013).

The Caution With Comfrey

While comfrey is an herb with a long history of many different uses, its internal use has become quite controversial due to scientific studies, some dating back 40-60 years, that revealed potentially harmful effects of pyrrolizidine alkaloids (PAs) (Moreira et al., 2018), which are found in comfrey.

Certain types of pyrrolizidine alkaloids (PAs) are known hepatic and genetic toxins, and in some cases, respiratory toxins (Hoffmann, 2003). Despite this toxicity, scientific studies have also revealed that some types of PAs have several beneficial pharmacological properties, such as antimicrobial, anti-inflammatory, anti-cancer, and anti-HIV activity, as well as the ability to inhibit acetylcholinesterase enzyme (Moreira et al., 2018).

While a number of plants contain PAs, such as alkanet (Alkanna tinctoria), arnica (Arnica montana), borage (Borago officinalis), coltsfoot (Tussilago farfara), comfrey (Symphytum spp.), and echinacea (Echinacea spp.), not all PAs are toxic. Depending on their molecular structure, PAs can be either saturated (such as those found in arnica and echinacea) or unsaturated (such as those found in alkanet, borage, coltsfoot, and comfrey). Saturated PAs are considered non-toxic, while unsaturated PAs are considered toxic (Hoffmann, 2003). 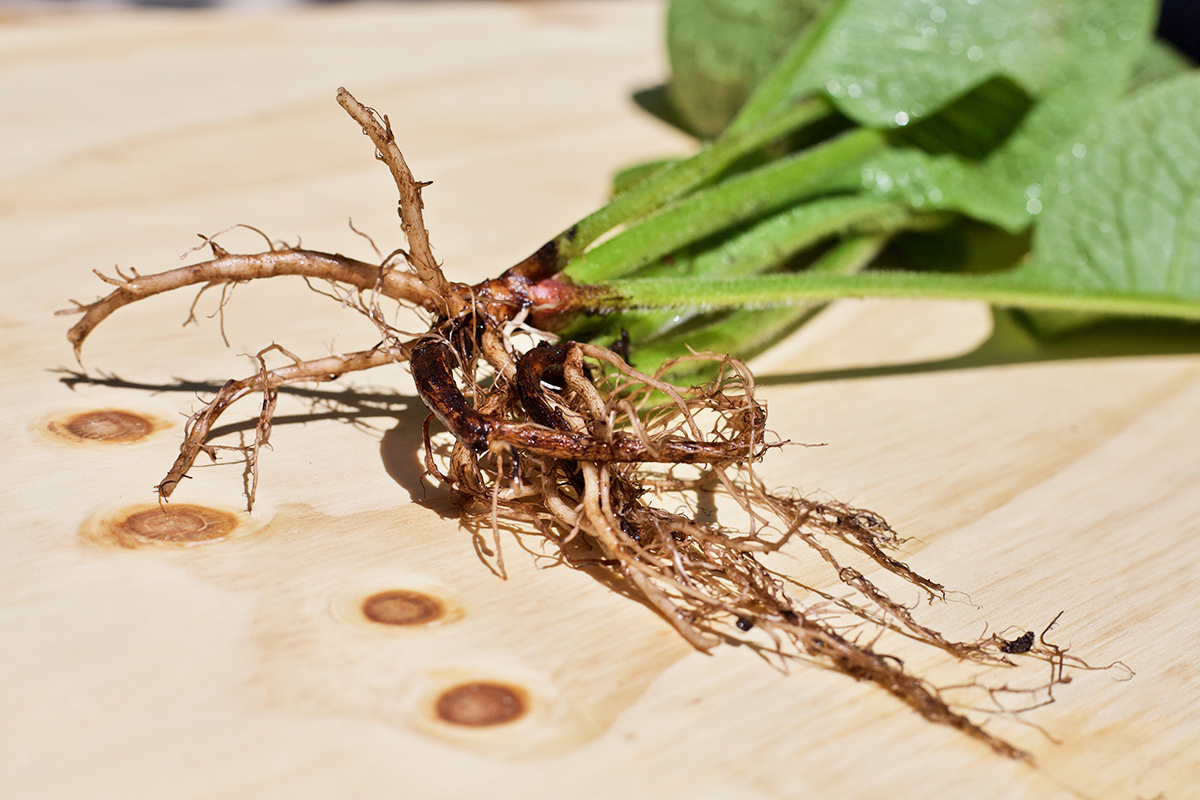 PA toxicity occurs when unsaturated PAs are absorbed from the intestines and passed to the liver to be metabolized. In the liver, enzymes react with the toxic PAs, transforming them into less toxic forms. However, it’s during this detoxification process that an oxidative reaction occurs, which results in the formation of toxic metabolites known as pyrrole-like intermediates—these are the true cause of comfrey’s toxic effect as these metabolites bind to proteins, RNA, and DNA and are the primary cause of the hepatotoxicity that causes liver damage (Hoffmann, 2003).

The most common result of PA toxicity is veno-occlusive disease in the liver. It is believed that the pyrrole-like intermediates damage sinusoidal and epithelial cells, which occludes blood flow to the liver tissue, eventually resulting in tissue death (Mills & Bone, 2005). The toxic effect of PAs is not a new phenomenon, and many cases of PA poisoning, from mild to severe and even fatal, have been reported (Hoffmann, 2003); however, the toxic effect of PAs in comfrey is where the debate is focused.

Animal studies on the internal use of comfrey are plentiful but often show mixed results. In a 2006 short-term study using oral preparations of comfrey (S. officinale) root extract in mice and rats, no hepatic and biliary toxic effects were observed at the conclusion of the study; however, researchers did recommend that longer studies are needed to determine the safety of PA-containing plant extracts (Seremet et al., 2006). On the other hand, other studies using rats that were given isolated PAs from comfrey root or young leaf, both of which have higher levels of PAs than mature comfrey leaf (Mills & Bone, 2005), have shown to be toxic when given in both low and high concentrations (Mei et al., 2005; Yeong et al., 1993). (Note that Mei et al. used S. officinale, while Yeong et al. used S. x uplandicum).

While it can be helpful for herbalists to take these studies into account, it should be noted that the majority of research involved isolating PAs and injecting them at various concentrations, often very high concentrations, into rats. Since a chemical in isolation behaves differently than when present in a whole plant, rats are different than humans, different routes of administration can affect toxicity, and it is sometimes unclear which comfrey species (S. officinale or S. uplandicum) was used, there is dissension among herbalists regarding this decision and whether comfrey is indeed toxic to a healthy human (Hoffmann, 2003) when used in appropriate dosages and frequencies. 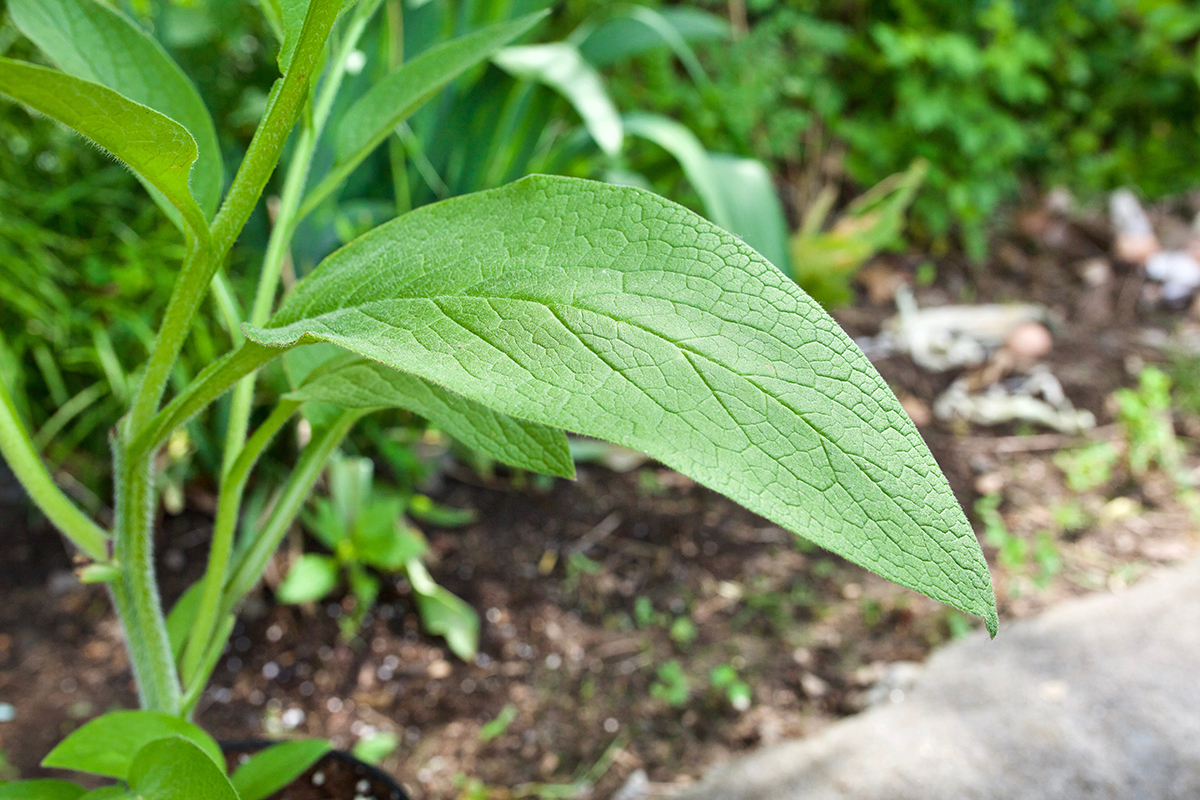 At this point, there are no clinical studies showing the link between PAs and liver toxicity when comfrey is taken at typical doses by healthy humans. While cases of veno-occlusive liver disease have been reported by individuals taking comfrey leaf or root, it is not known which species of comfrey was used, and dosage and frequency varied among individuals as well, thus making it difficult to come to a conclusion.

That being said, based on case reports of liver disease in individuals taking the leaf or root of unspecified Symphytum species, the American Herbal Products Association (AHPA) did ban the sale of botanical products containing toxic PAs (including those with Russian comfrey and prickly comfrey) for internal use, suggesting those products should be restricted to external use (Gardner & McGuffin, 2013).

Internal Versus External Use

Traditionally, comfrey has been used for hundreds of years, both internally and externally. However, as we’ve come to learn more about PAs and their effects on human and animal health, some herbalists have changed their approach to using PA-containing herbs, including comfrey. 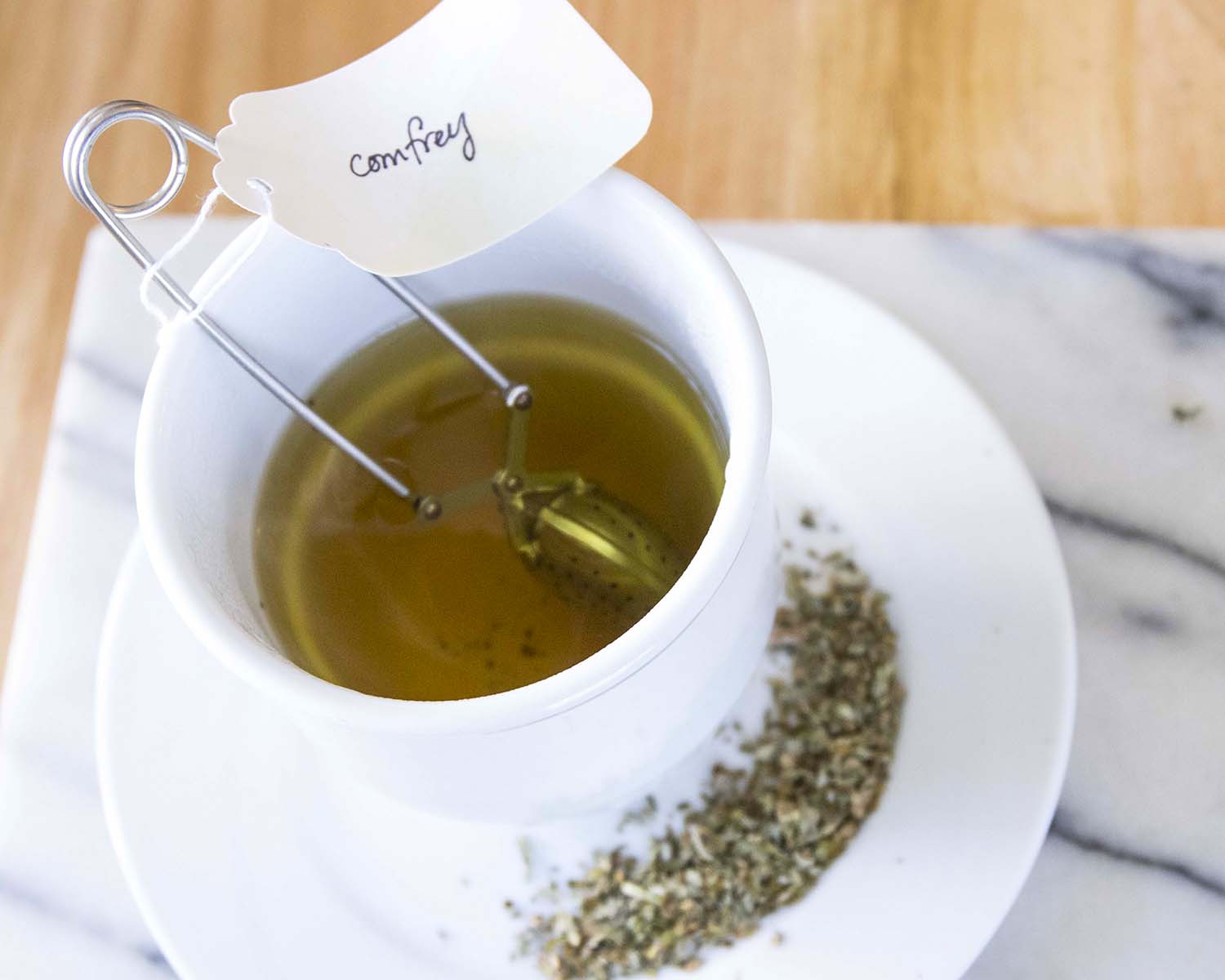 When it comes to the internal use of comfrey, some herbalists are comfortable continuing to use comfrey internally with a few cautions. 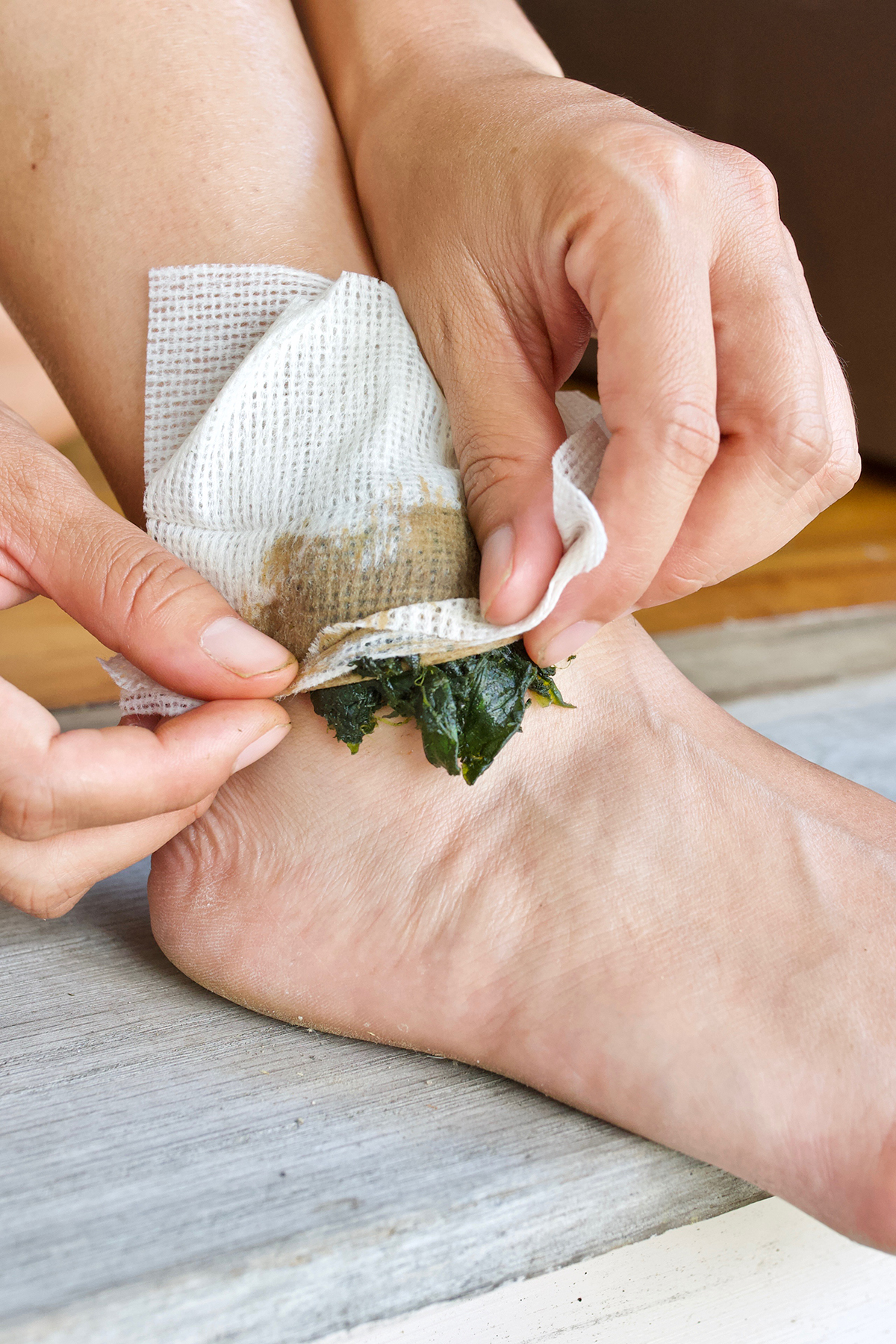 For other herbalists who have chosen to play it safe with all PAs, they choose to limit comfrey to external use only through the use of preparations such as herb-infused oils, salves, and poultices. AHPA reports that in Germany, the recommended external application of comfrey is a daily exposure at or below 100 μg unsaturated pyrrolizidine alkaloids limited to 4 to 6 weeks per year (Gardner & McGuffin, 2013). While a small amount of comfrey’s PAs may be absorbed through the skin, when used within the guidelines stated above, the amount is believed to be limited and, therefore, safe to use (Groves, 2016; Hoffmann, 2003). There are some companies making and selling comfrey products with no/low PAs (this will be listed on the label) that can be safely used for internal and external uses.

So Should You Use Comfrey Internally?

In closing, we here at the Herbal Academy suggest erring on the side of caution and avoiding comfrey for internal use, particularly in the case of preexisting liver conditions, those taking medications that may affect liver function, during pregnancy, and while nursing. If you are considering the internal use of comfrey, we recommend researching this matter for yourself in more depth so you have all the facts.