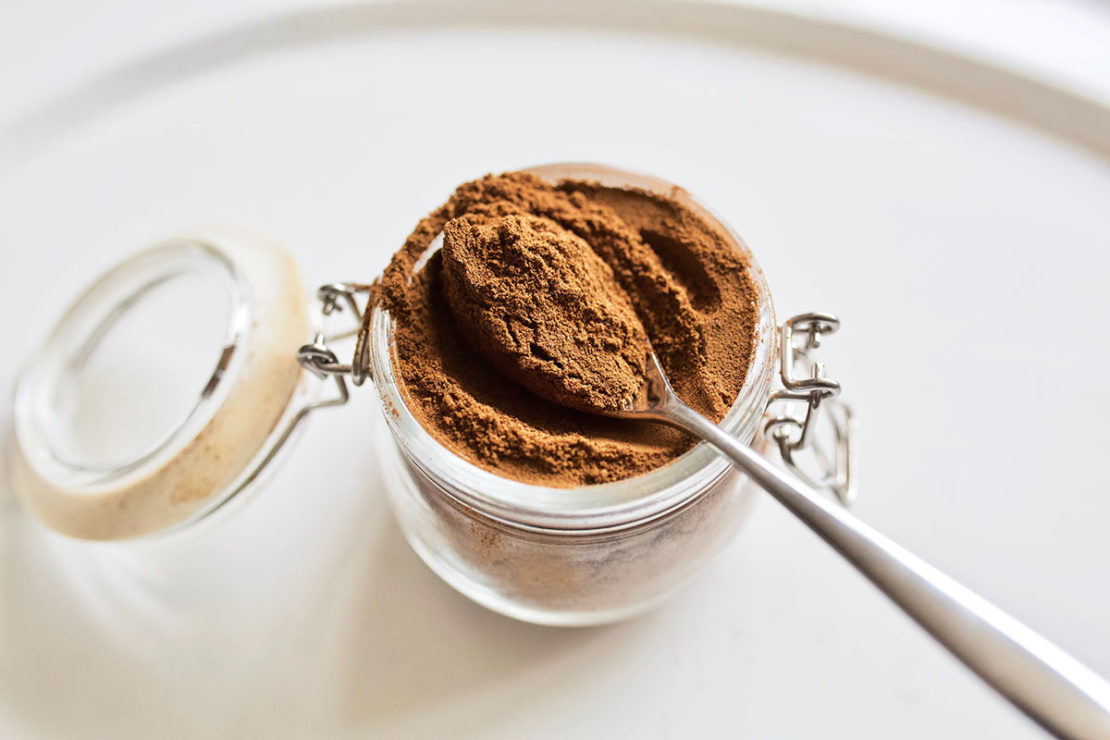 It’s officially fall in North America. Many things hearken this wonderful transitional season: cozy sweaters, big scarves, falling leaves, scary movies, and treasured final harvests from vegetable gardens. Few things are more emblematic to the season, however than pumpkin spice. It’s a flavor that many find entirely comforting. Feelings associated with the blend of spices generate words such as “warm,” “cozy,” and “satisfying.” These words are a subtle hint towards the beneficial capacity of the herbs that comprise the pumpkin spice blend.

In this article, we will look at the pumpkin spice craze and the herbs from which this flavor is built, including their wellness benefits and how you can bring that true pumpkin spice flavor into your everyday life during the autumn season. 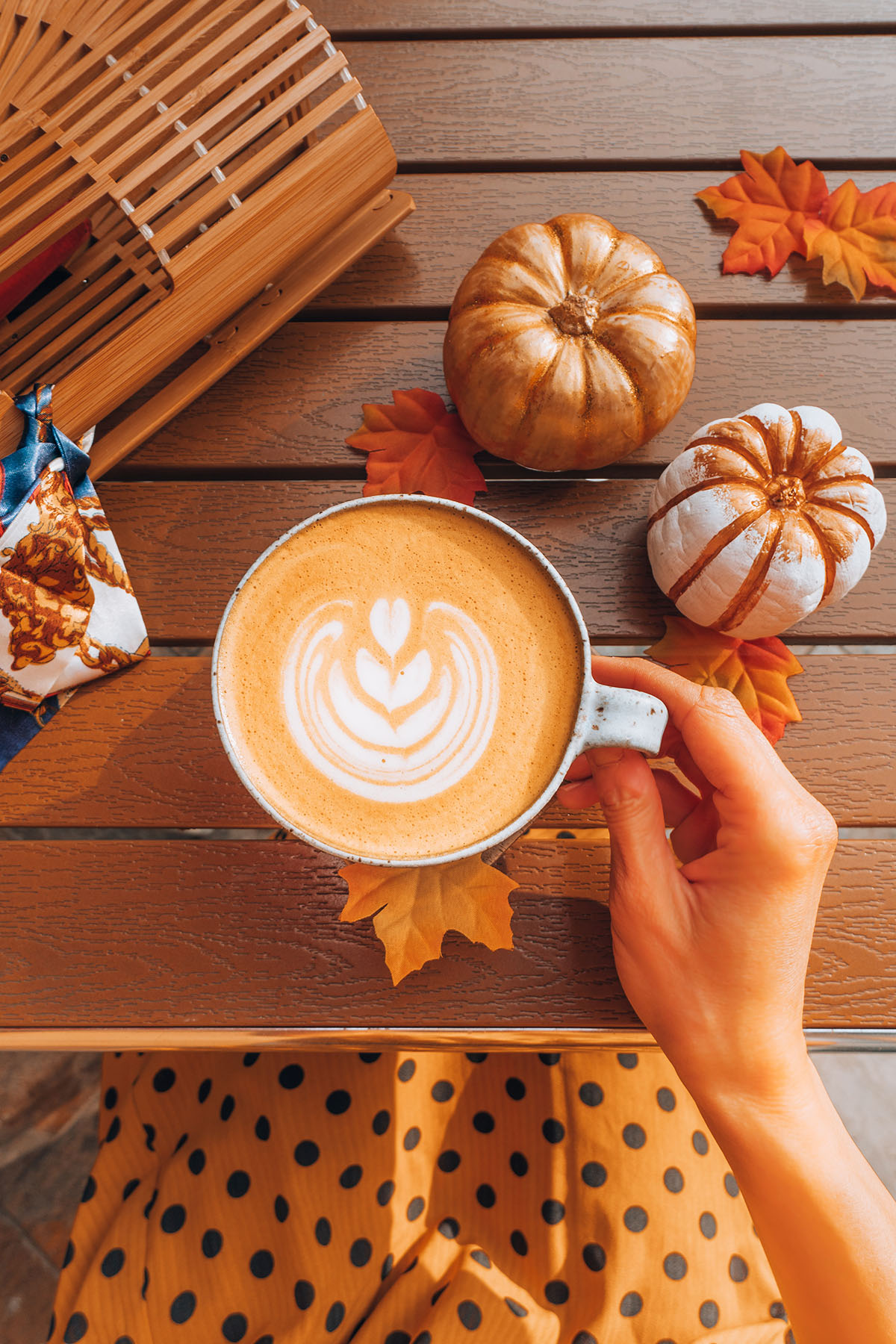 Many people are quick to devour pumpkin spice flavored everything, as it serves as a celebration of autumn’s arrival. However, the pumpkin spice flavoring you find in many autumn treats can be far from the traditional pumpkin spice blend since processed and ready-made foods found in fast food outlets and conventional grocery store aisles may contain artificial flavorings and few traces of the original herbs. As fall is a transitional season, there are real benefits to incorporating the authentic spices in this blend into our autumn routine. Since most of these spices occupy our kitchen cabinets, rather than our herbal apothecary, some may not even realize the potential sitting in their pantry! In addition to tasting great, pumpkin spice herbs offer benefits as a comforting digestive aid and warm, energizing blend.

As the pumpkin spice craze permeates the season, let’s slow down and examine its individual components. We will discuss what gives pumpkin spice its digestive benefits and makes it more than just a buzzworthy trend.

5 Spices That Make Up the Pumpkin Spice Flavor 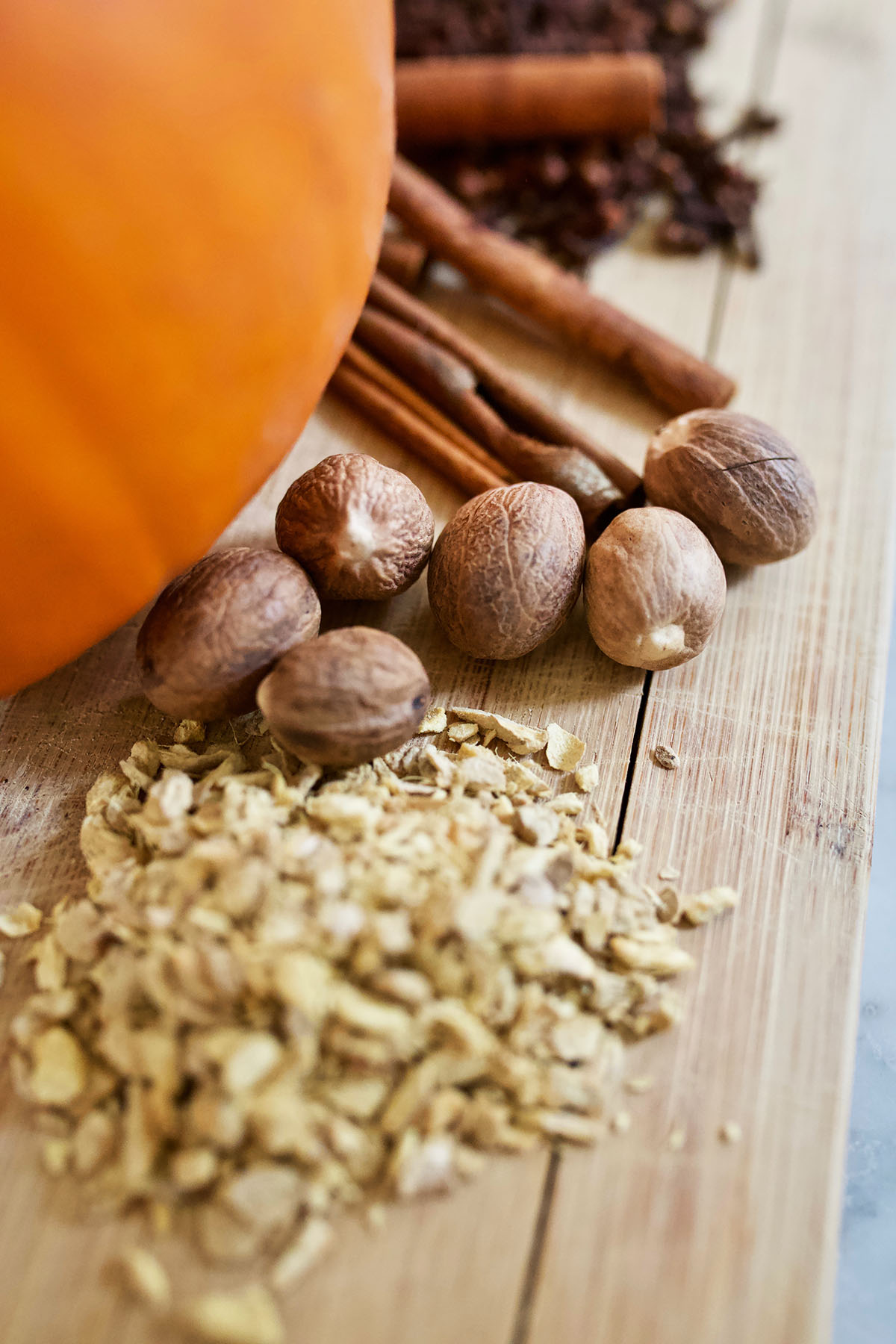 Cinnamon is a common staple in the kitchens of most baking enthusiasts as it is sweet and warming to the taste. Traditionally, only the bark from wild trees native to Sri Lanka and India was used in herbalism, but now, cinnamon is widely cultivated in many tropical regions, mainly as a culinary herb and less so for its wellness properties. While Ceylon cinnamon (Cinnamomum verum) is the most common variety of cinnamon used in herbalism, cassia cinnamon (C. cassia), native to China and an extremely close cousin to C. verum, has similar constituents and properties (Chevalier, 1996). In large quantities, cassia has irritant potential due to its high levels of coumarins (Blahová and Svobodová, 2012). For this reason, C. cassia should not be consumed in high doses, but in small amounts, as in culinary use, it is no cause for concern. 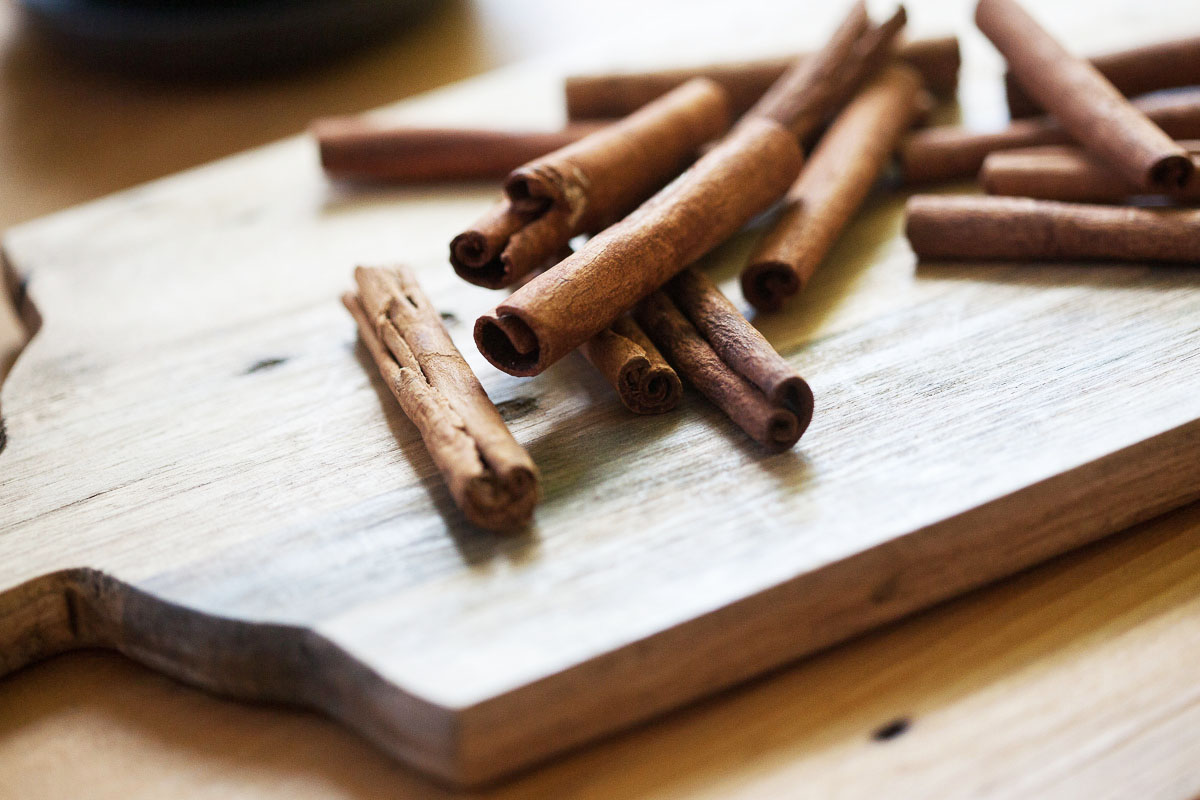 Throughout Asia, India, and Europe, cinnamon has been taken for “cold” conditions, such as loss of appetite, runny noses, sneezing, fatigue, and coughs, as well as sore throats, common in colder seasons; it increases warmth and circulation throughout the body (Clarkson, 1972). According to herbalist Kami McBride (2010), cinnamon’s warming and stimulating energetics may also support the digestion of richly fatty foods and aid in breaking down the mucus involved in the body’s processing of dairy. Cinnamon has also been used when digestive complaints, such as nausea, vomiting, and diarrhea, are present. This digestive support may be attributed to the presence of cinnamaldehyde, one of the main active compounds present among cinnamon’s volatile oils (Foster, 2006).

Cinnamon has both sedative and analgesic properties, meaning it has the potential to ease aches and pains. This may indicate cinnamon’s use for aching muscles associated with viral conditions, like seasonal colds and the flu, or to soothe common female ailments, like uterine spasms and cramps. It is also useful in cases of debility and convalescence, such as weakness following an illness. Cinnamon may comfort and reduce pain slightly as one recovers naturally. (Chevalier, 1996)

Where cinnamon is found, ginger (Zingiber officinale) is a likely companion. With a hot and spicy taste, ginger has been revered since ancient times. Folklorists ascertain that the people of medieval Europe thought ginger originated in the Garden of Eden (Clarkson, 1972). The ginger plant is native to Asia and is grown throughout tropical regions. Many species in the ginger family are used for wellness and culinary purposes, but Z. officinale remains the most widely researched. 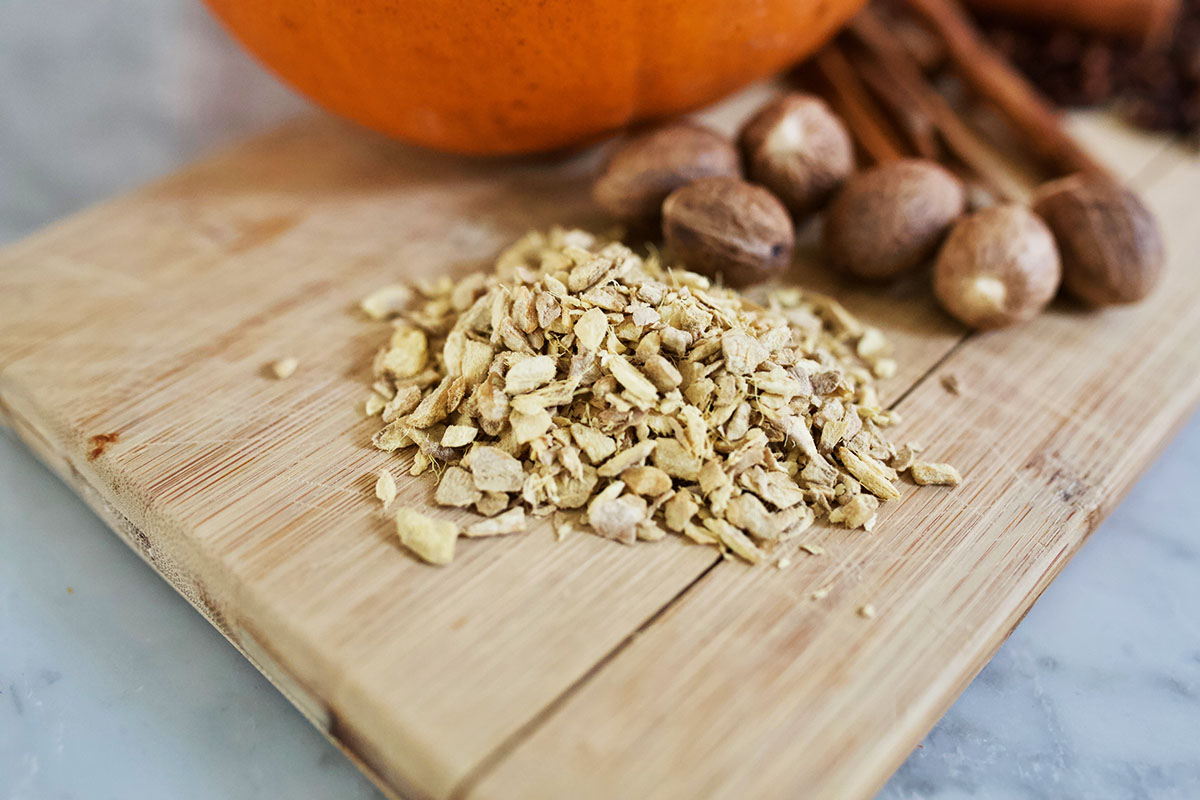 Much of ginger’s digestive actions are attributed to its volatile oil and oleoresin content (McBride, 2010), making it useful in cases of indigestion, gas, colic, and nausea. Ginger rhizome contains chemicals known as gingerols and shogaols, which stimulate bile secretion and have anti-nausea and antispasmodic effects. A 2005 study found the herb to be extremely effective, even compared to conventional pharmaceuticals, in the treatment of postoperative nausea and in relieving digestive upsets tied to motion sickness, morning sickness, and other causes of nausea (Borrelli, 2005). Ginger has some antimicrobial qualities as well, which makes it beneficial in some minor instances of food poisoning (Chrubasik, 2005).

The active compound zingibain is an enzyme found in ginger that has been shown to be anti-inflammatory (Foster, 2006) and may help with chilblains, a type of inflammation of the blood vessels caused by repeated exposure to the cold (Chevalier, 1996). Additionally, anti-inflammatory action may reduce pain temporarily. Bloating or cramping associated with the menstrual cycle may also be eased with ginger (Chevalier, 1996) in part due to ginger’s warming and moving, energetic nature.

As mentioned earlier, gingerol is a constituent in ginger that not only lends itself to some digestive support, but it is also responsible for the stimulating heat of the herb (McBride, 2010). These warming capabilities make ginger an effective circulatory stimulant, distributing heat throughout the body. This increase in heat can stimulate sweating and, therefore, ease feverish body temperatures. The warming and moving energetic nature of ginger can potentially soothe coughs by thinning and moving mucus as well as comfort a person during achy or chilled sensations experienced during a cold.

As you can see, ginger is a natural ally for many reasons when the weather cools and the seasons change (McBride, 2010).

Cloves (Syzygium aromaticum) are the dried flower buds of the clove tree and were one of the earliest spices to be traded and imported at the height of the Roman empire (Clarkson, 1972). Today, cloves are grown extensively in Tanzania, Madagascar, the West Indies, Brazil, and other regions. In pumpkin spice blends, clove lends a punctuating savory accent. Its rich, warm taste and aroma attract people to the kitchen and invigorate the senses. 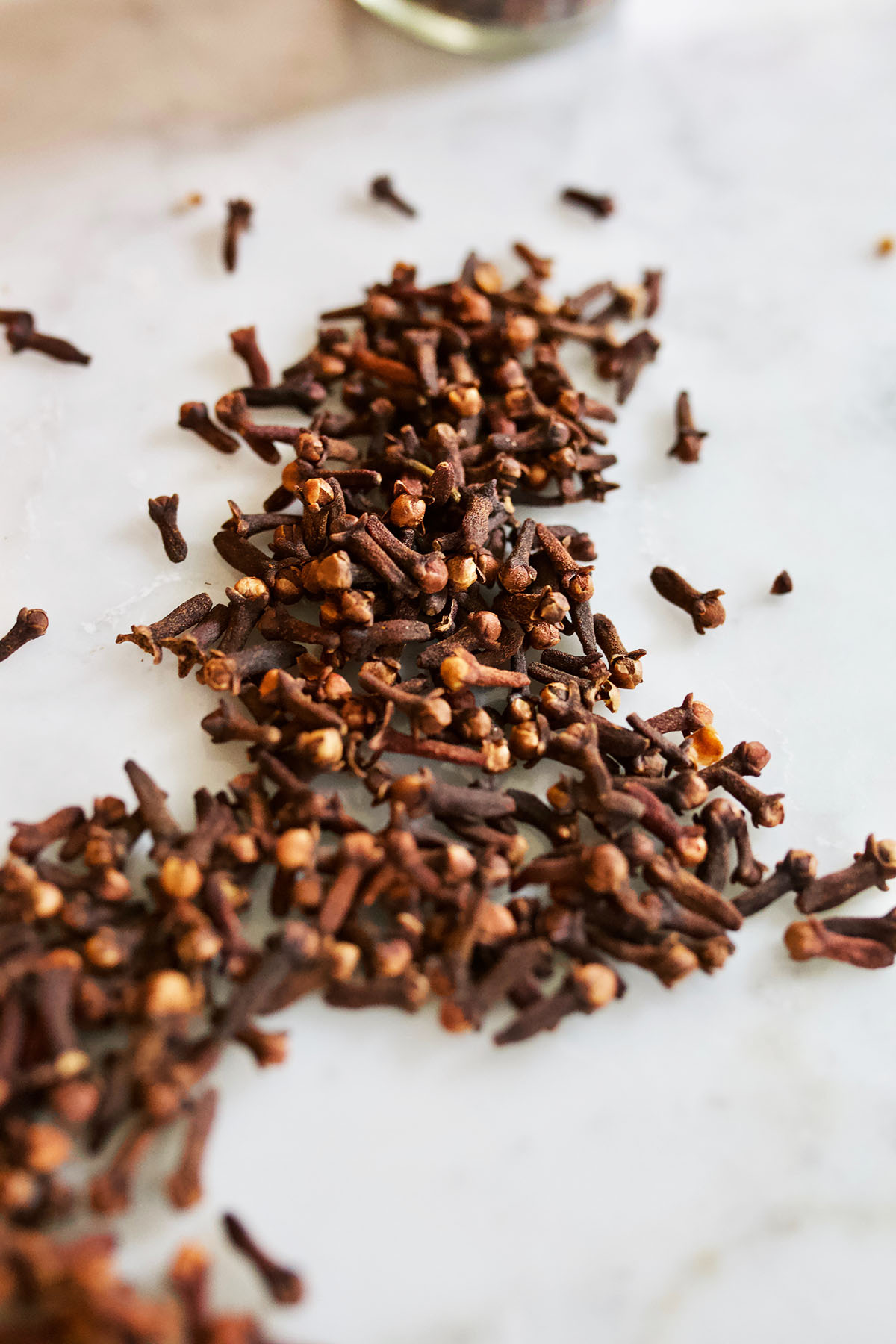 Cloves have been used for wellness purposes across Asia for thousands of years. Across Europe from the Middle Ages onwards, oranges studded with cloves were used as insect repellents and pomanders, which were fragrant inventions thought to ward off the black plague (Clarkson, 1972). Today, clove’s antimicrobial properties make it useful for a number of viral and bacterial ailments, such as infections, parasites, and bad breath (Chevalier, 1996).

Clove is also a strong anesthetic (McBride, 2010) and is often used to ease pain, most notably in oral conditions such as toothaches. Its antispasmodic properties help to ease stomach- and intestinal-related discomforts such as gas, colic, and bloating (Chevalier, 1996). In conjunction with other antispasmodic and circulatory-supporting herbs (such as its partners in the pumpkin spice blend), clove is a wonderful digestive aid.

Nutmeg (Myristica fragrans) comes from a tree native to the Molucca Islands of Indonesia, and the flavor is iconic to seasonal dishes. It is prevalent not only in pumpkin spice but in winter eggnog, savory dishes, and holiday treats as well. 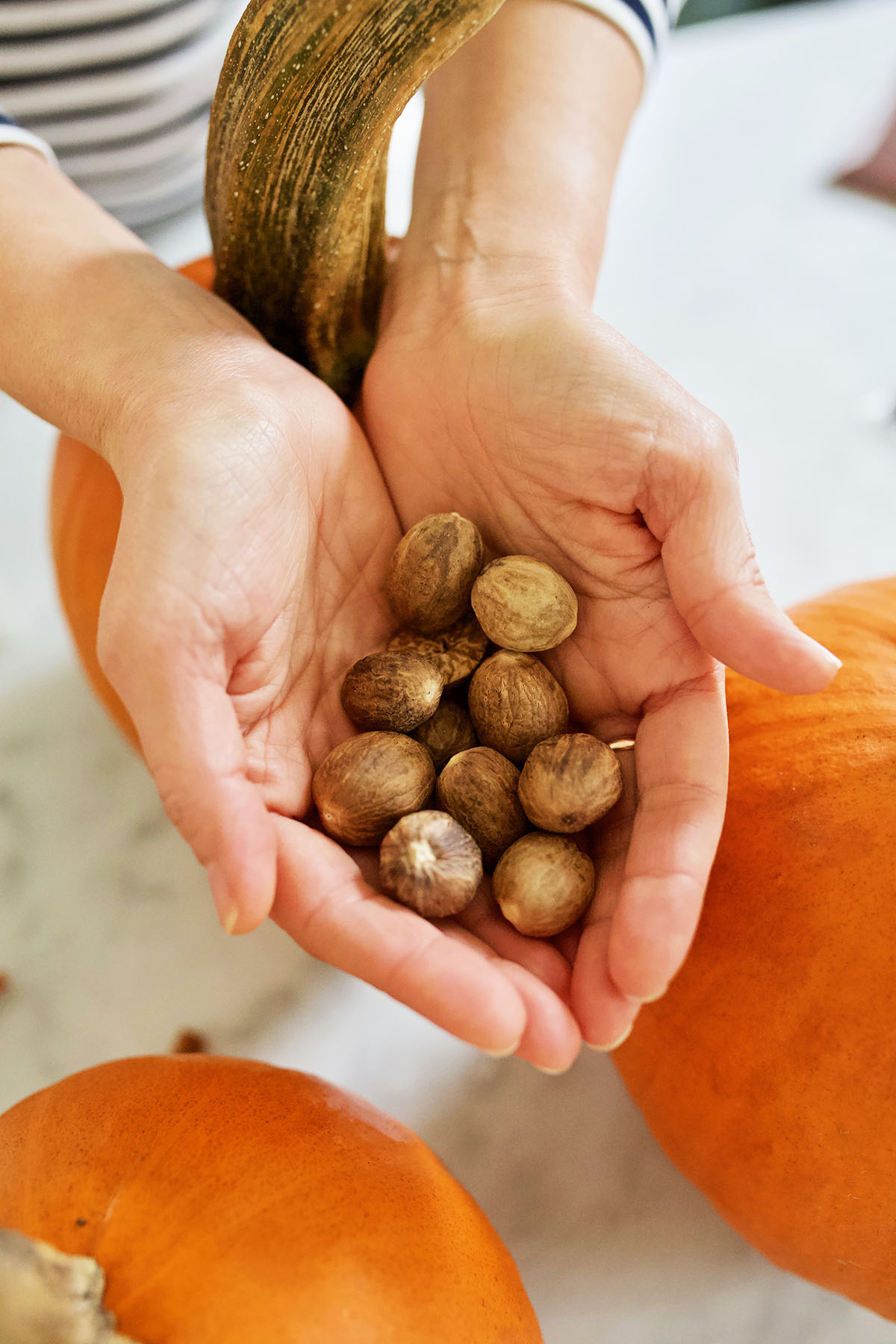 The use of nutmeg is minimal in Western herbalism since nutmeg is toxic when used in excess. This toxicity is attributed to the constituent myristicin (Toxnet, 2007). Symptoms such as overstimulation, hallucinations, and death have been known to occur after the consumption of only 5 grams of grated nutmeg or 1-3 nutmeg pods (Toxnet, 2007). In culinary and herbal applications, however, the use of nutmeg in low doses is entirely safe.

Like many other spices originating from tropical regions, nutmeg contains volatile oils that are superbly stimulating. In some folklore traditions, it has a long-valued reputation as an aphrodisiac, as some believe it to increase sexual stamina and libido (Chevalier, 1996). A 2005 7-day experimental study used an orally administered nutmeg extract on male rats to monitor changes in sexual activity. The results showed a significantly increased sexual activity which researchers believe might be attributed to nutmeg’s nervous stimulating property (Tajuddin et al., 2005).

Due to its anesthetic and antispasmodic effects on the stomach and intestines, nutmeg is also used to ease digestive tract upsets, such as nausea, vomiting, and diarrhea, and to increase appetite (Chevalier, 1996).

This warming and pungent spice is native to the Carribean and South America and is extensively cultivated throughout Jamaica and other regions. Allspice (Pimenta dioica) is an aromatic evergreen tree with clusters of white flowers and tiny green berries that gradually turn brown as they ripen and mature. Though it was a popular Caribbean spice long before the arrival of Europeans, it is now widely used in many sauces, chutneys, and condiments across the globe. 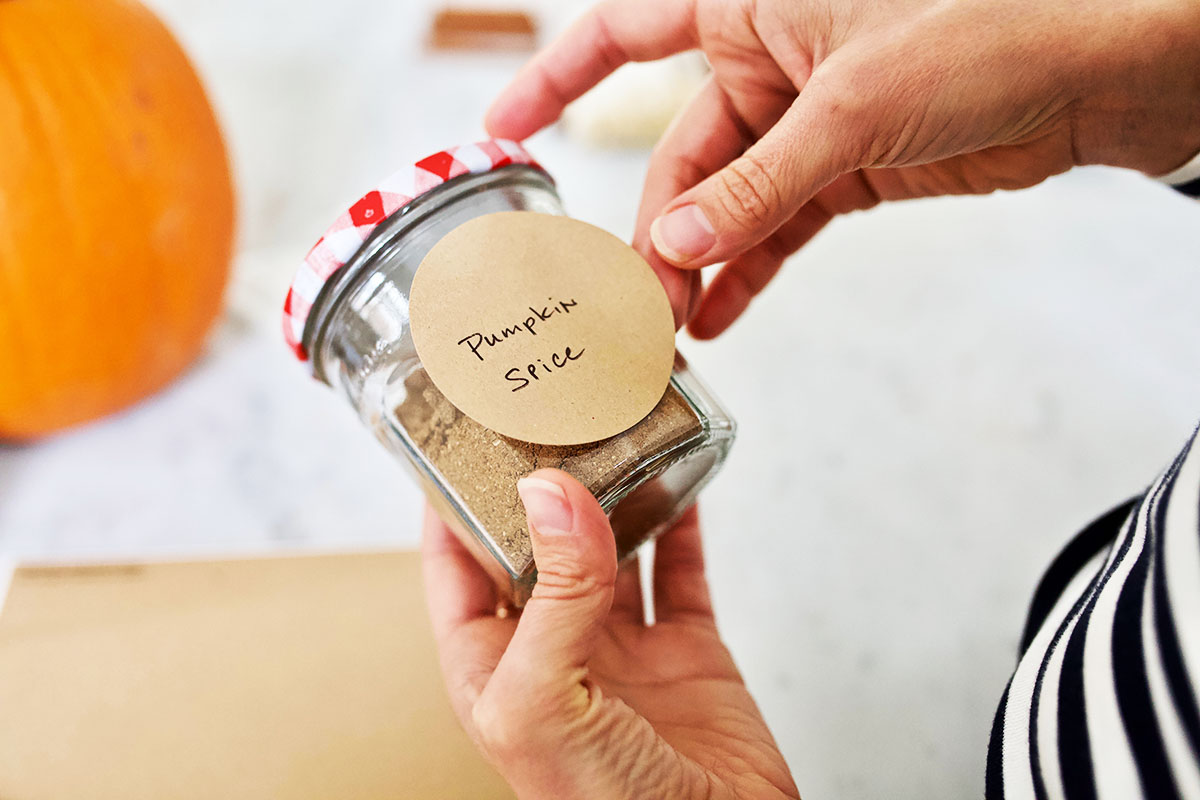 The allspice berry contains volatile oils, proteins, and lipids (McBride, 2010). Allspice is very similar to clove in that it is considered antimicrobial and a digestive stimulant; their respective volatile oils share similar compounds such as eugenol, beta-caryophyllene, and methyleugenol (Tisserand, 2014). These constituents make allspice a great choice for easing flatulence, diarrhea, and indigestion, aiding the gut’s digestion of rich, heavy foods, and even soothing menstrual cramps. The antimicrobial and circulatory stimulating properties of allspice support the body during colds and flus as well (Chevalier, 1996).

It is important to note that many commercially available processed foods such as pumpkin spice lattes, pies, and doughnuts contain artificial flavors, and as such, may not provide the wellness qualities of a real pumpkin spice blend. Fortunately, it is simple to concoct your very own pumpkin spice blend at home. For the best results, use high-quality spices that are fresh and preferably less than one year old. Spices that have been sitting in a cabinet for a long time may not retain the same beneficial properties.

A Recipe for Homemade Pumpkin Spice 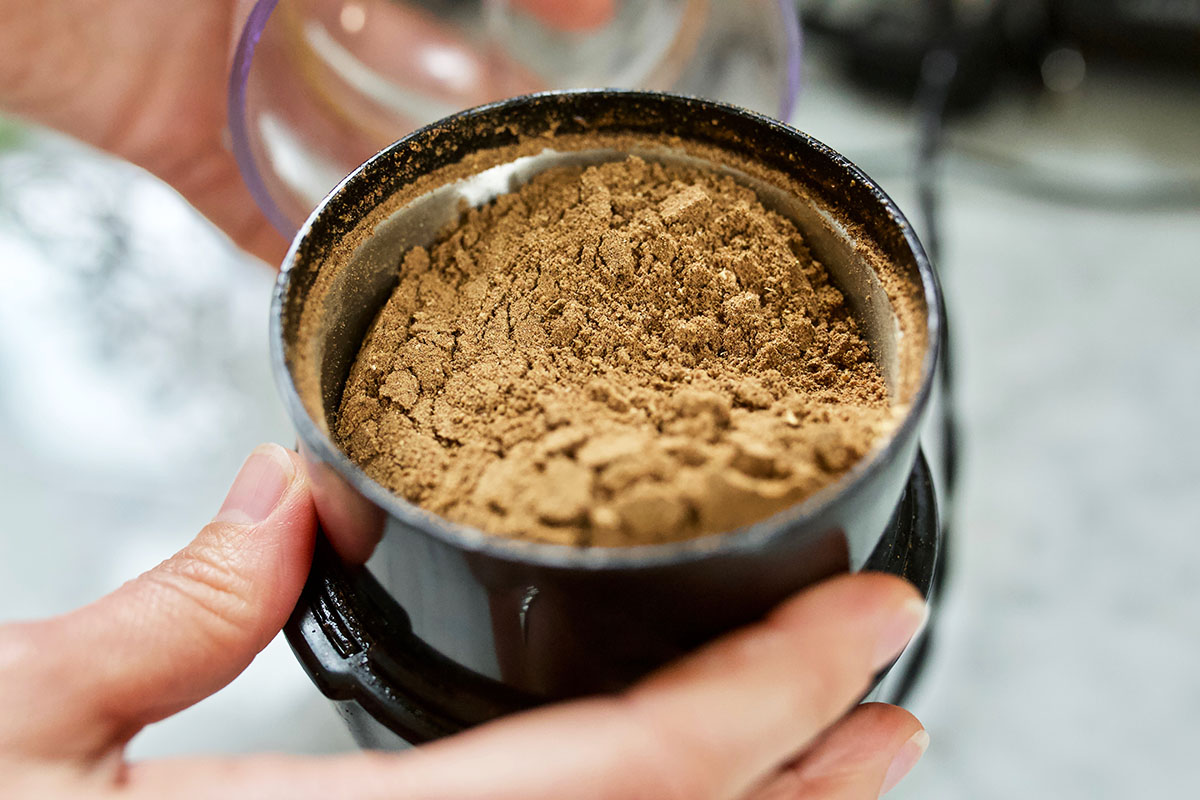 Recipe from The Pioneer Woman

Pumpkin Spice Up Your Life

The holidays are fast approaching, and we might be finding ourselves eating richer, more calorie-dense foods than we typically do during the summer months. When used in small amounts, this traditional pumpkin spice blend may serve as a digestive aid through harvest time feasts, rich desserts, and late-night sneaks to the fridge.

As the weather becomes colder, it can be important to invite more herbal allies into the diet in hopes of staving off seasonal chills. The warming action inherent to this blend stimulates circulation, which is especially important as the days grow shorter and the nights longer and colder. The antimicrobial properties of this blend are another welcome addition during the colder months when cold and flu season is at its height. When you are feeling digestive discomfort following heavy holiday treats, try adding pumpkin spice to your post-meal digestif.

There’s no arguing that the pumpkin spice blend is supremely comforting and delicious. Don’t you think it’s time to embrace pumpkin spice and its wealth of wellness benefits along with it?

Samantha works as an herbal practitioner and instructor. She regularly volunteers with an animal foster charity and queer support centers for at-risk youth. When not digging in her garden, she may be found with her nose in a book or bent over a mortar & pestle. She lives in Alberta, Canada with her high school sweetheart and a regular rotation of rescue cats, dogs, and birds.