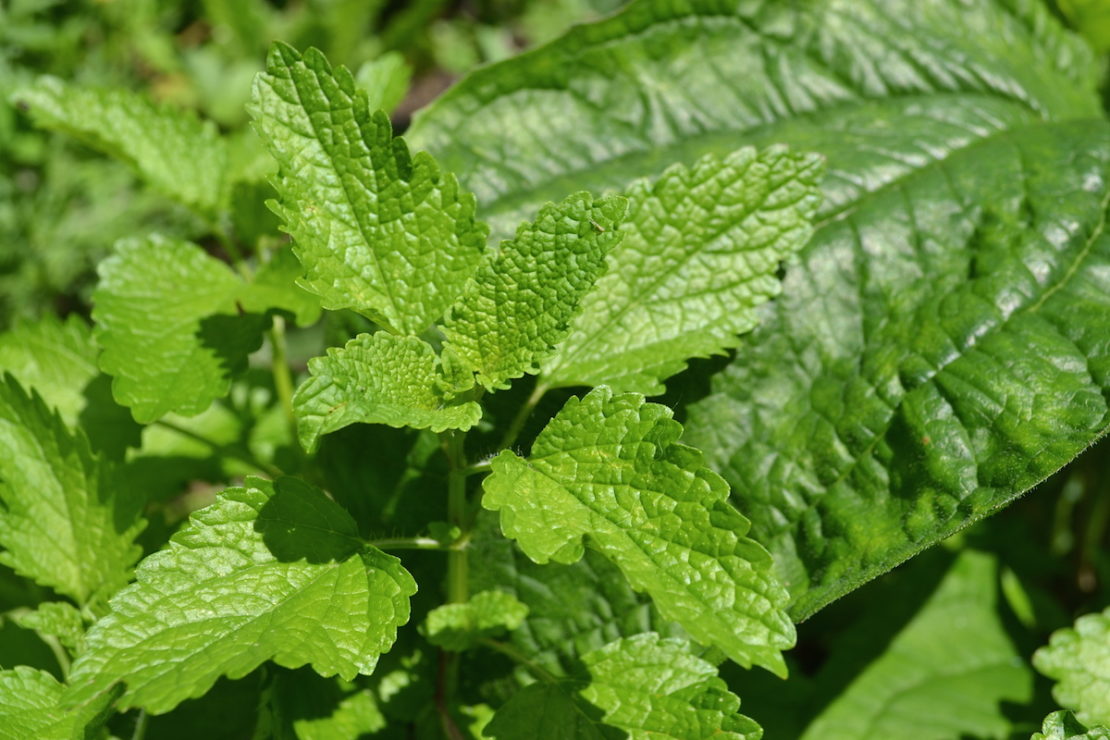 Lemon balm (Melissa officinalis) goes by many names: bee balm, Melissa, heart’s delight, and sweet balm. Whatever we call it, bees adore the plant. Lemon balm has been used enthusiastically by beekeepers and healers since ancient times.

And it’s no wonder. This member of the mint family has an irresistible scent—the leaves smell both minty and lemony at the same time, in a way that is often compared to citronella. The leaves are crushed by beekeepers to release this smell and draw worker bees to a newly-constructed hive—a technique in use since antiquity. Lemon balm contains many of the same chemicals that are found in bee pheromones. The herb is also appealing to parasitic wasps, which predate several garden insect pests that annoy gardeners (Balick, 2014).

Native to the Mediterranean and Asia, this perennial produces hairy leaves and tiny flowers that may be yellow, white, or pink in summer. It can be found all over Europe and North America, where it has naturalized in many areas…to the delight of many bees, no doubt (Castleman, 2009)!

But lemon balm has a mysterious side—it’s connected to bees and immortality in several unusual ways. 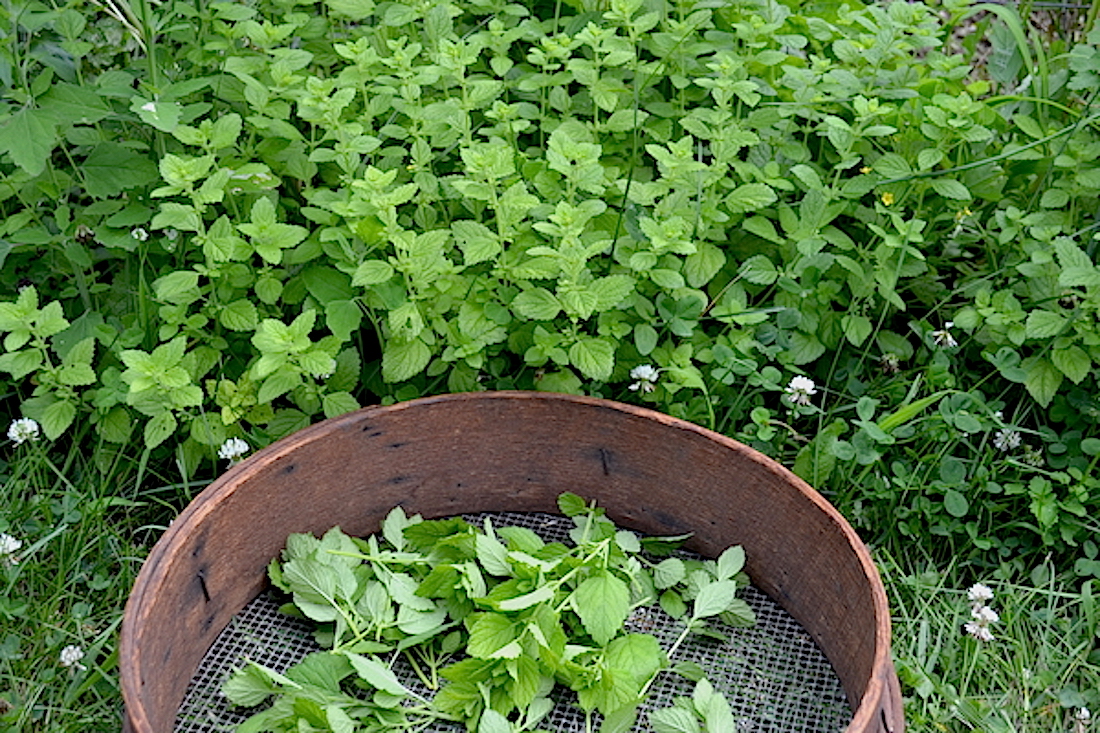 In Greek mythology, Melissa was the nymph who discovered honey and nursed the infant Zeus. Nymphs were said to be able to take the form of bees. These bee-nymphs, named the Melissae in her honor, nursed the infant Zeus with honey. He gained power to later become the king of the gods. Even the genus name, Melissa, is the Greek word for “honeybee” (Blumenthal, 1997).

Bees were also sacred to the goddess Artemis. Priestesses who served her were given a bee honorific title as well. The Oracle at Delphi was also sometimes referred to as a bee…a powerful title for a powerful woman with one toe in the great unknown. Ever since then, the lemon balm plant was associated with power and even immortality.

Historically, humans have used lemon balm as folk medicine for a variety of conditions. The Greeks and Romans used it to flavor wine for fever and crushed the leaves into poultices for wounds and to staunch bleeding. Following the lead of the Greeks, the Romans called the plant “apiastrum,” from apias, or “bee.” Pliny and Dioscorides advocated the use of lemon balm as an anti-venom against stinging creatures.

In the ninth century, Charlemagne consumed lemon balm teas and tinctures to promote health and longevity. He decreed that lemon balm should be included in all apothecary and monastery gardens in his realm. Charlemagne was also fascinated by bees, requiring all farms to keep them and send a portion of their honey and beeswax to the crown.

Bees symbolized immortality and industry, and they are one of the oldest symbols of French rulers. This symbol dates to the Merovingian era. It’s theorized that the fleur-de-lis actually represents a bee. No doubt, the bee-attracting power of lemon balm was of assistance in helping farmers meeting this edict of the crown. Official gamekeepers of bees were designated in order to maintain the integrity of wild hives. During this period, eau de Melisse, or Melissa water, was widely promoted as a tranquilizer and nervine (Foster, 2006).

In the Middle Ages and Renaissance, lemon balm was prescribed for a long list of ailments, including insomnia, toothache, menstrual issues, digestive upsets, headaches, poor appetite, fever, and anxiety. Its soothing smell made it very popular as a strewing herb at this time and could be found on church floors until the nineteenth century (Johnson, 2010).

Lemon Balm: The Elixir of Life?

Paracelsus (1493-1541), the famous occultist and founder of toxicology, was enamored of lemon balm in his potions. He included lemon balm in a decoction that was purported to be his revitalizing “elixir of life.” This potion was said to regenerate the drinker’s strength and make one almost immortal. His elixir was claimed even able to revive patients close to death (Orr, 2014).

In 1611, French Carmelite nuns produced Carmelite water. This famous concoction included lemon balm, lemon peel, nutmeg, and angelica root, infused in alcohol. Primarily sold as a headache remedy, it was also used as a perfume and general health tonic. Carmelite water was rumored to have been consumed by Emperor Charles V of Spain, who sought its many storied health benefits.

In 1696, the London Dispensary agreed with Paracelsus’ favorable view of lemon balm and advocated a daily infusion of lemon balm in wine to vivify the brain, renew the body, and regenerate youth (Staub, 2008).

Even centuries later, in 1931’s A Modern Herbal, the author suggests that lemon balm has a nearly preternatural ability to prolong life. According to Mrs. Grieve, lemon balm tea was purportedly the key to longevity for the thirteenth-century Prince of Glamorgan, who lived to be 108, and John Hussey of Sydenham, who made it to 116 by sipping the tea with breakfast (Grieve, 1971).

Lemon balm is also one of the ingredients in Chartreuse and Benedictine liqueurs, which originally were touted to have healing properties. The recipes were developed by monks hundreds of years ago. Benedictine includes over twenty-seven different ingredients, but the chief three are angelica, hyssop, and lemon balm. Both are still available to enjoy today (Tucker, 2009). 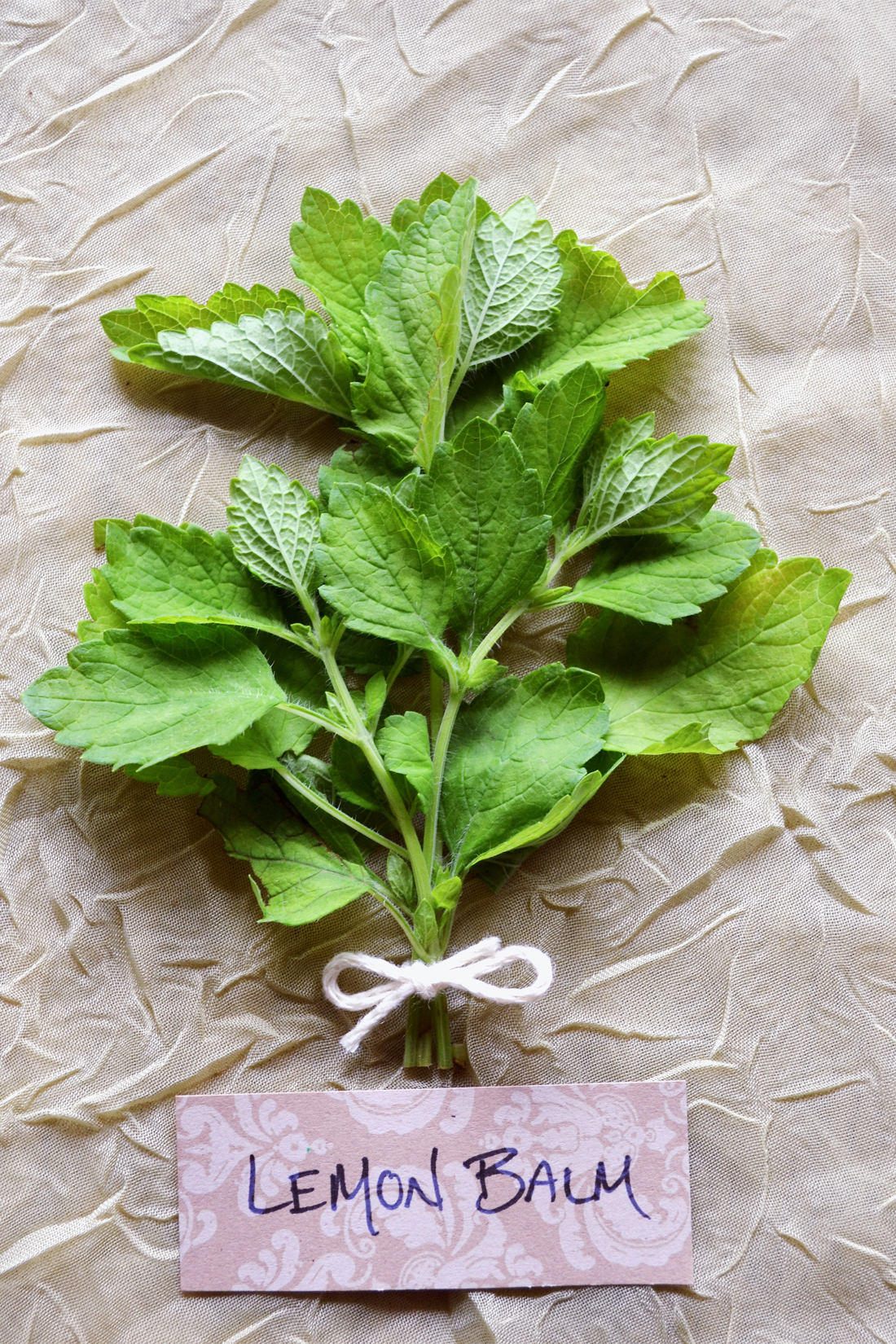 While no herbal decoction can fulfill the extravagant claims made by Paracelsus and others, lemon balm may have some potential to improve human health. German Commission E (which is analogous to the United States Food and Drug Administration) has approved lemon balm to treat flatulence and digestive tract spasms (The Herb Society of America, 2009).

Though lemon balm is often recognized as a relatively safe herb, the scientific data on its efficacy to treat medical conditions is mixed. Some studies in humans and animals have suggested that lemon balm improves sleep quality, quells mild anxiety symptoms, enhances cognitive performance, and relieves dyspepsia. Additional research has suggested that lemon balm may have potential to positively affect symptoms of Alzheimer’s disease. Other studies are exploring the effects of lemon balm on viruses, such as herpes simplex and HIV-1 (Ulbricht, 2005; Verma, 2015).

However, it’s difficult to tell exactly how much of an effect lemon balm exerts on its own; lemon balm is often studied in proprietary preparations that combine other herbs (such as valerian in sleep preparations). As a result, the power of lemon balm on its own is largely unknown. Large-scale, randomized, double-blind studies on lemon balm need to be conducted.

Lemon balm is an attractive plant, to both humans and bees since antiquity. The bees have the right idea: lemon balm is a delightfully edible plant that may have beneficial medicinal qualities. In the meantime, we can enjoy the plant and the possibilities surrounding it.

Tucker, A. O., DeBaggio, T., DeBaggio, F., & Tucker, A. O. (2009). The encyclopedia of herbs: A comprehensive reference to herbs of flavor and fragrance. Portland, OR: Timber Press.

Jessica is a biologist and author for Leaf Mother.