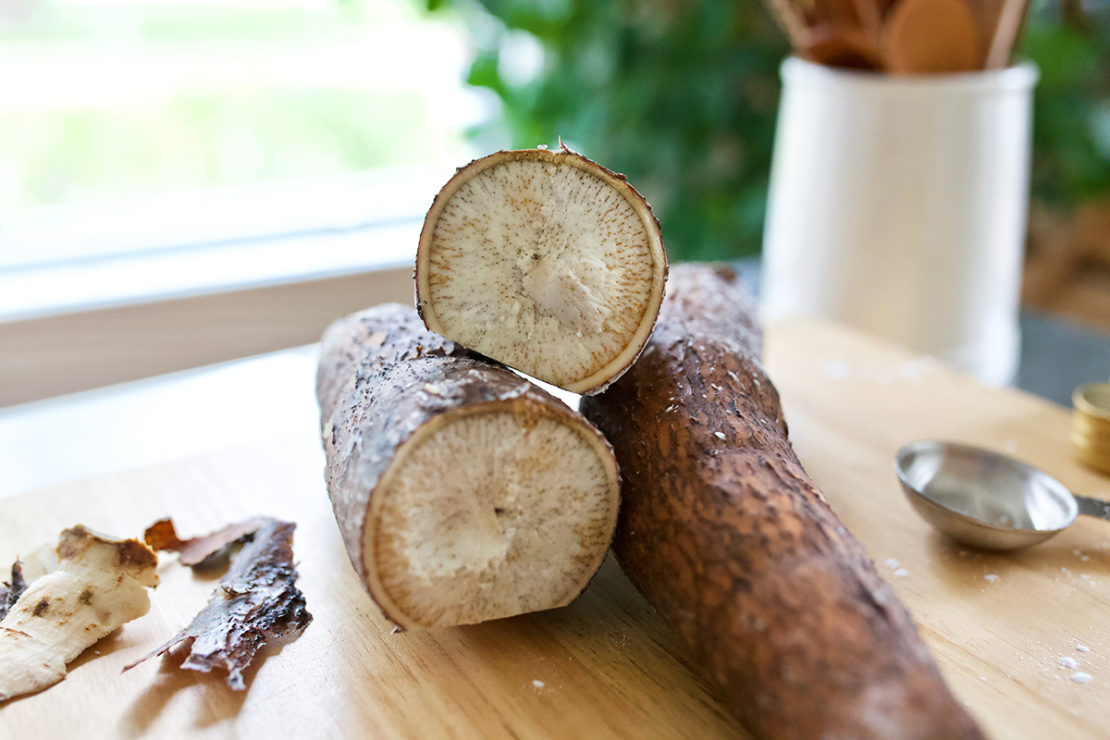 We are lucky to have an abundance of gluten-free and paleo diet options available to us these days, and if you are anything like me, searching out new gluten-free options is a daily adventure. One vegetable getting a lot of recent attention is a versatile and nutritious root called cassava (Manihot esculenta Crantz) root. While you may just be hearing about this root for its use in food, it has been used as a food and in herbalism for centuries where it is native. In this article, I would like to share with you all that I’ve learned about cassava root’s uses and health benefits.

What is Cassava Root? 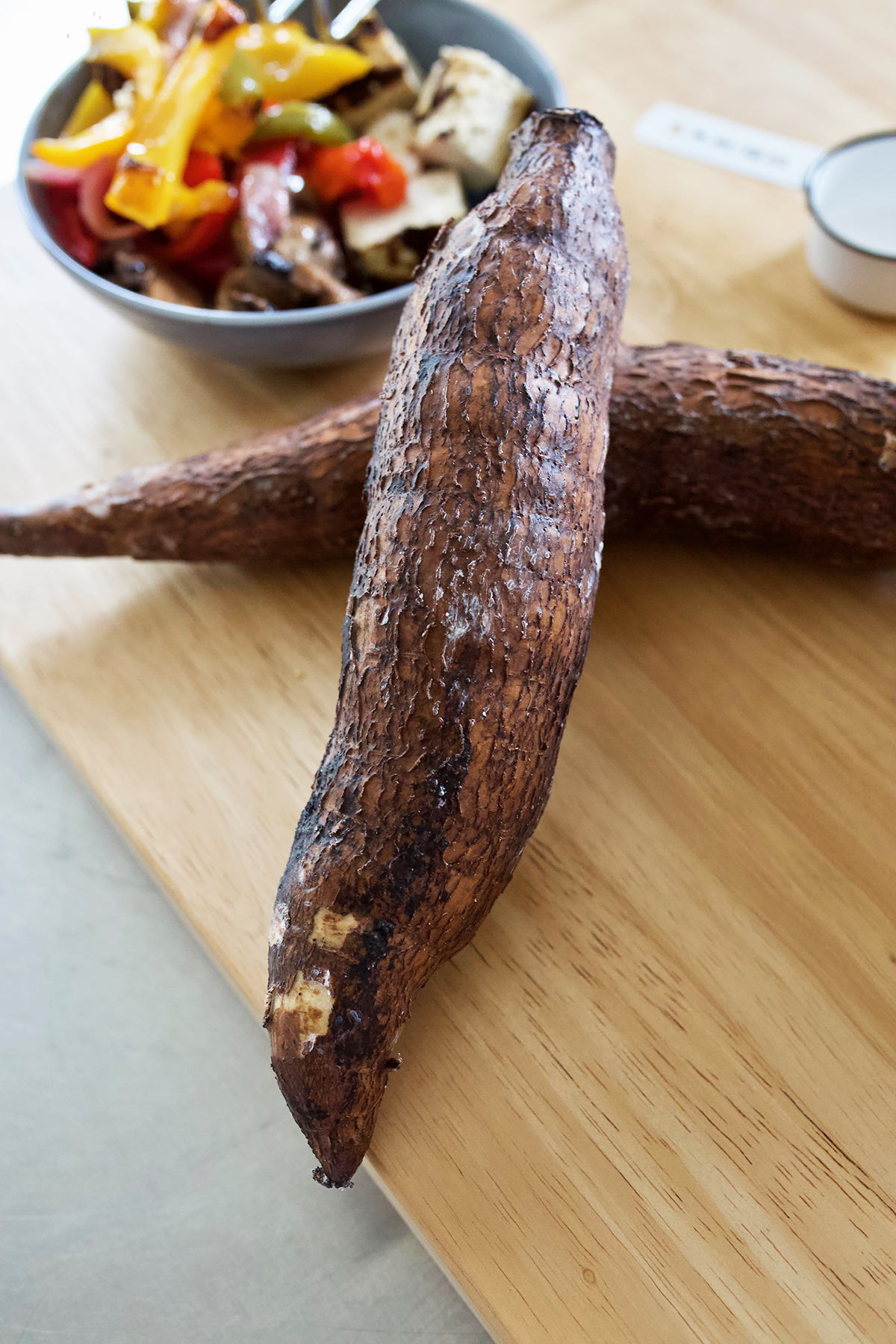 Cassava is a root vegetable—the subterranean part of the cassava shrub. Closely related to potatoes and yams, cassava has a shape that resembles a sweet potato (Dresden, 2018). In the United States, cassava root is also known by other common names such as bitter cassava, manioc, tapioca, Brazilian arrowroot, and yuca (United States Department of Agriculture [USDA], n.d.a.; United States Department of Agriculture, n.d.b.). Although similar in spelling, yuca is not to be confused with yucca, a spiky ornamental plant used mainly in gardens.

Cassava’s starchy roots have been used and cultivated for over 9,000 years, which makes it one of the world’s oldest crops (Howeler, Lutaladia, & Thomas, 2013). Cassava root is very tolerant of poor soil conditions and uses water efficiently. One way it does this is by holding off producing more leaves until the next rainfall. It is easily propagated from stem cuttings (Howeler et al., 2013), so it is a great option for smaller farms looking for readily available planting materials at a lower cost. All of these features help cassava root to grow as a crop that will yield a more bountiful harvest in conditions where some other crops would fail (Howeler et al., 2013).

Cassava Across the World

The genus Manihot contains over 100 species of trees, shrubs, and herbs from northern Argentina to the southern United States. Cassava root is believed to have originated from multiple locations, but some studies indicate that the first place this species was found was on the southern edge of the Brazilian Amazon (Thresh, Bellotti, & Hillocks, 2001).

Cassava root is known as one of the world’s most reliable food security crops as it can be harvested anytime between 6 and 24 months as needed (Howeler et al., 2013). It is grown primarily in the tropical regions of West Africa, South America, and Southeast Asia, and is one of the leading sources of food and livestock feed in these regions (USDA, n.d.b.). Cassava root is high in carbohydrates and produced at a low cost, so it is considered an inexpensive high caloric dietary staple in many parts of the world (Howeler et al., 2013), making it an easy choice to provide nourishment to many inhabitants of the tropics (O’Hair, 1995).

Today cassava is considered a primary component of the diet of more than 800 million people around the world (Prochnik et al., 2012), due to its being relatively low maintenance, drought-tolerant, inexpensive, and calorie-rich. The world has seen an increase in cassava root production by approximately 100 million tons since the year 2000 (Howeler et al., 2013).

As discussed above, cassava root is a high-calorie food composed primarily of carbohydrates and water (Dresden, 2018). Although it is not necessarily a health food that can be recommended for weight loss, it is low in cholesterol and fat (USDA, 2018), which makes it a suitable accompaniment to a healthy diet for certain individuals.

Because cassava root is not high in protein (O’Hair, 1995), individuals that substitute cassava for other foods should ensure they also eat protein to create balance in their diets. Despite the root itself being low in protein, the leaves of the woody cassava shrub can be cooked in a similar fashion as spinach and can contain between 20 to 32 percent protein (Awoyinka, Abegunde, & Adewusi, 1995). In many parts of the world, cooking and consuming both the roots and leaves of the cassava plant would provide a more nutritionally dense and well-rounded meal (Dresden, 2018). 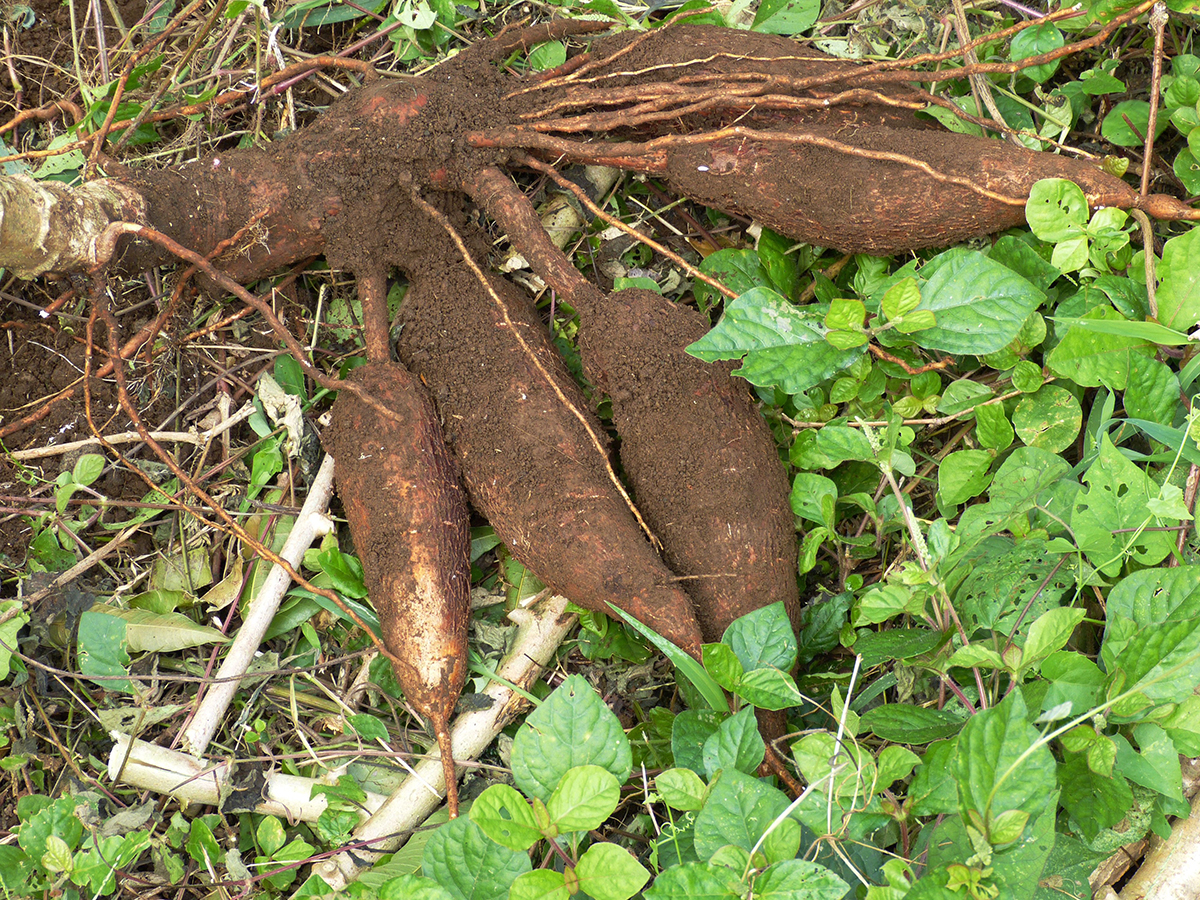 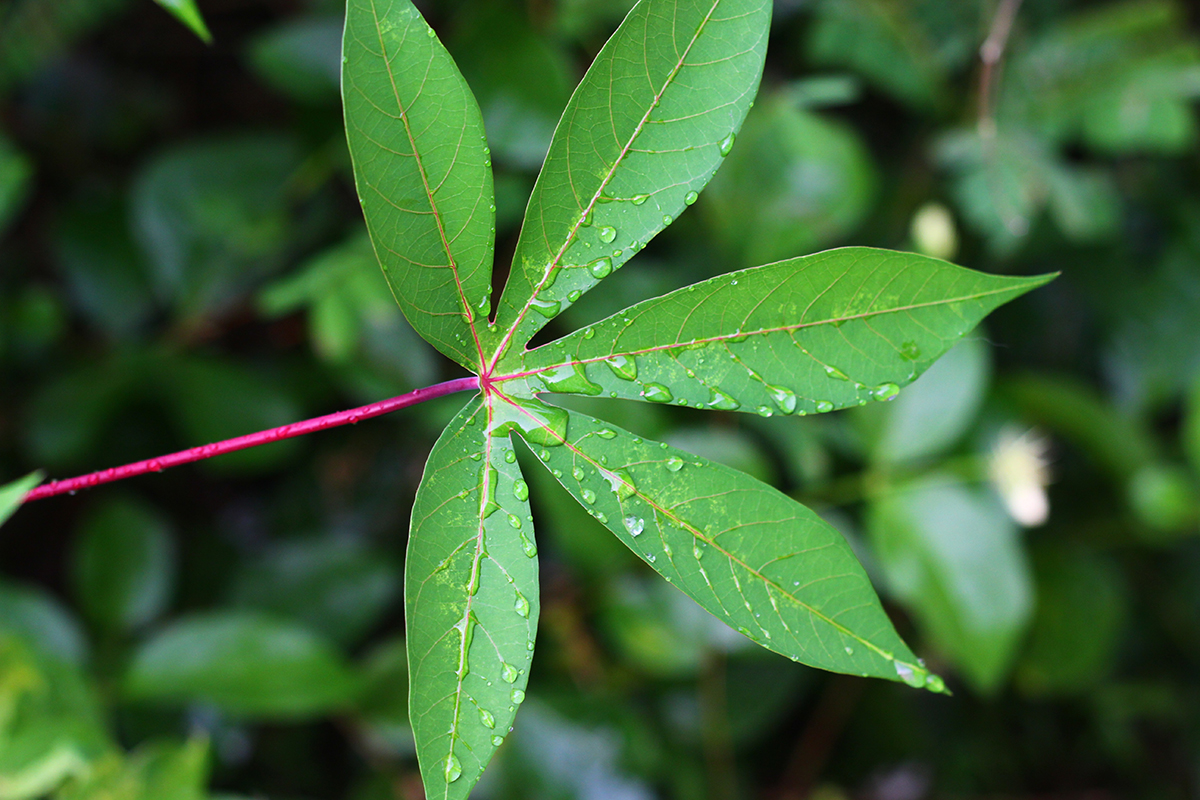 Although cassava root shares similarities with other tuber vegetables, such as sweet potatoes, yams, and jicama, cassava root does not contain the same nutritional profile as its nutritional powerhouse cousins. According to the United States Department of Agriculture’s (USDA) National Nutrient Database, Cassava does have a high amount of Vitamin C, folate, potassium, calcium, and magnesium (USDA, 2018).

Another reason cassava is a popular choice of those suffering from digestive complaints is that it is considered to be a resistant starch, which can help feed beneficial gut bacteria (Canadian Society of Intestinal Research, 2013). Resistant starches are similar to insoluble fiber and pass through the digestive system more smoothly and easily, not breaking down to sugar until reaching the colon.

As health-conscious consumers and individuals with dietary concerns become more choosy, gluten-free, grain-free, and low-carb diets are increasing in popularity. Although cassava root is certainly not low in carbohydrates, it is a great addition to your diet if you are unable to tolerate wheat or traditional gluten-containing foods.

In the United States, one common use of the cassava root is to create tapioca starch. Cassava roots are peeled, washed, and shredded into a pulp. The pulp is then washed and dried, resulting in tapioca starch (Stockton, 2015). You may have heard of tapioca pudding and bubble tea which both use tapioca pearls—tiny balls formed from the starch. Tapioca is also used to thicken sauces and soups and is often used in gluten-free flours and many over-the-counter gluten-free breads and baked goods. Being that it is gluten-free, grain-free, and nut-free, it is more easily tolerated for individuals suffering from celiac disease, allergies, or gluten intolerance (McDermott, 2016). 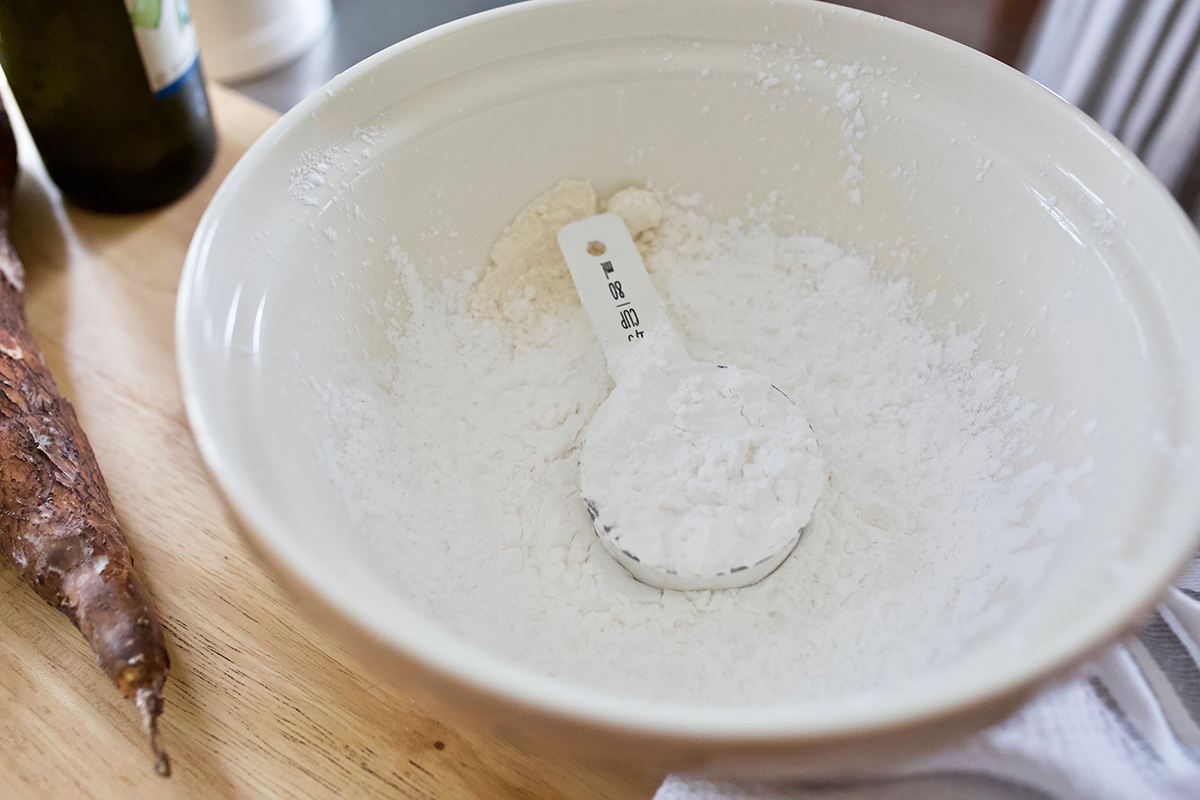 Despite being highly-tolerant to some individuals, tapioca may still be considered a processed food when compared to cassava flour. Cassava flour is made by simply peeling, drying, and grinding the cassava root, thus resulting in flour. Since cassava flour is made from the whole root, and more closely resembles a whole food product, it is known to contain more dietary fiber than its counterpart, tapioca (Bryan, 2017).

Traditionally, cassava root is prepared like a potato. While the root must always be cooked (see the safety and precautions section below), it can be peeled, boiled, baked, mashed, or fried (can you say cassava fries—yum!) just as you would a regular spud (O’Hair, 1995). A traditional way of preparing cassava root in Cuba is a dish called yuca con mojo, which combines cassava root with a delicious sauce of orange and lime juices, garlic, onion, cilantro, cumin, and oregano (Rodriguez, 2019).

In Brazil, a popular topping for many traditional dishes is called farofa, which is cassava flour toasted in bacon or sausage fat, garlic, and butter (Lam, 2015) which is then typically crumbled on top of feijoada, a Brazilian black bean stew (Esposito, 2014).

Due to the high starch content, cassava root has also been used to feed animals, particularly livestock, and is alternatively used as a binder in making pharmaceuticals, textiles, paper, adhesives, and building materials, such as plywood. It is also known to be used for the production of ethanol biofuel (Howeler et al., 2013).

There has even been a recent consideration by some governments to blend imported wheat flour with cassava flour in bread-making. Because the cassava root is produced domestically, the country considering this would save money by “blending” the high priced wheat import with the cassava flour grown locally; Nigeria is considering substituting 10% of its maize crop (corn) with cassava grits for poultry feed, and in Africa, cassava root flour is being used more often as maize and wheat production and imports increase in cost (Howeler et al., 2013).

My favorite way to consume cassava root is the Siete Foods brand of cassava flour tortillas. When making my own transition to a gluten-free lifestyle, I found their coconut cassava tortillas to be a satisfying and delicious way to convert from wheat flour tortillas, wraps, and traditional bread products. Slightly warmed on the stove or in the toaster oven, these wraps are the closest I have found as a substitute for traditional flour tortillas for quesadillas, breakfast burritos, tacos, or sandwich wraps. I’d be lost without them!

Cassava must be peeled and cooked before eating as it is found to contain dangerous amounts of cyanogenic glycosides (which can be broken down to produce cyanide) if consumed raw (Food Standards Australia New Zealand, 2017).

While the majority of the time I recommend vegetables and fruits in their whole, unprocessed form, in the case of cassava, purchasing unbleached, organic, non-GMO, sustainably- sourced cassava flour may be a safer and more convenient option than handling the raw root on your own. 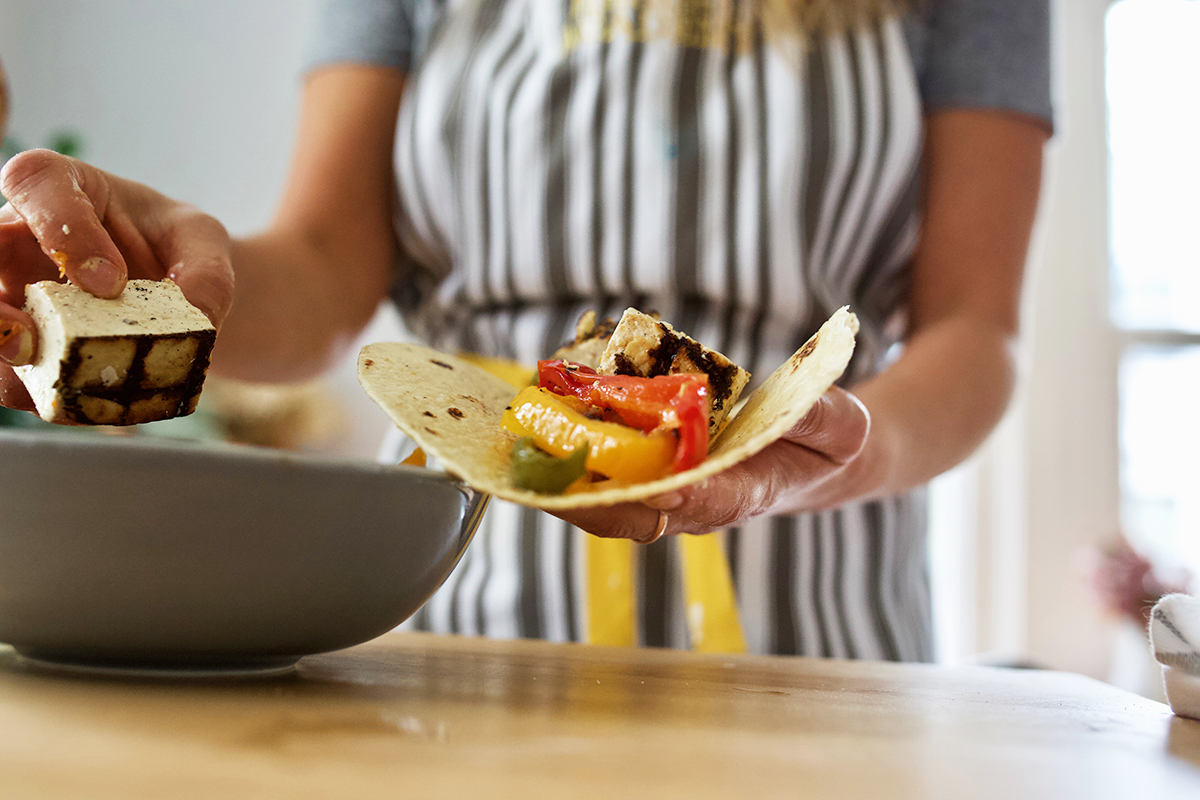 Being extremely versatile, cassava root can be cooked and consumed in many ways. I am thrilled to share several recipes in this article so that you may experience the taste of cassava root at home.

As I mentioned previously, I am infatuated with the cassava tortillas from Siete Foods. However, I was in search of a more affordable option for my gluten-free wrap fix, so the first recipe I share below is for Coconut and Cassava Tortillas. These tortillas almost taste as good, perhaps better, than my go-to Siete tortillas. The ingredients are simple and wholesome, and they are extremely easy to make. My favorite way to use these tortillas is for yummy breakfast tacos. I love adding scrambled eggs, avocado, salsa, and a tablespoon of sauerkraut. Yum!

Although cassava root does not offer a complete spectrum of nutrients and minerals as some other vegetables do, it is packed with carbohydrates for energy and is quite versatile as a substitute for wheat flour in gluten-free baking and other foods. This resilient and powerful root is drought-tolerant and grows quickly and easily in many parts of the world, thus allowing for an abundant harvest. I feel that cassava root is a vegetable that we will rely on for many years to come, especially as our dietary landscape continues to change, and we have the need for more ingredients to replace wheat flour to adapt to an increase in food intolerances and allergies. I hope this article has convinced you to give cassava a try! 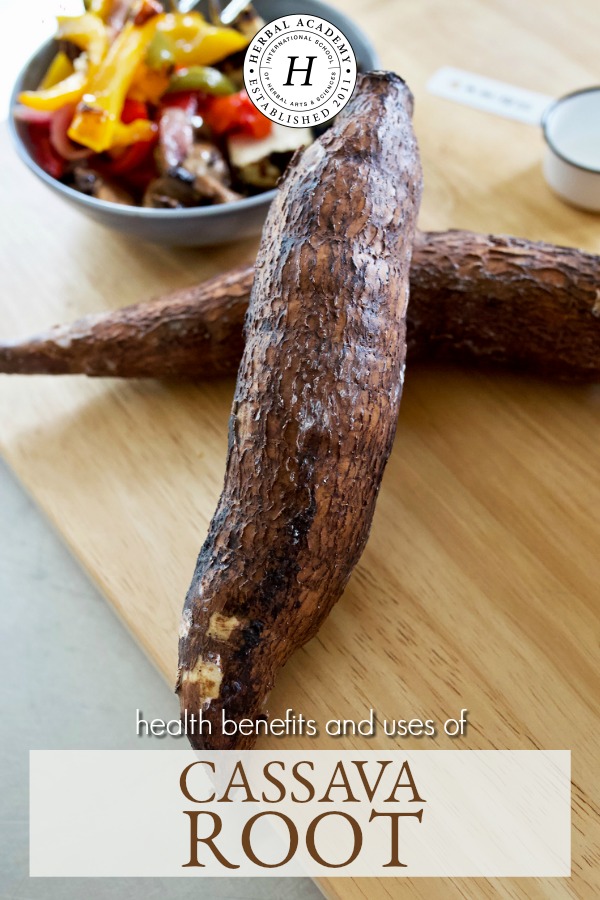 Bryan, L. (2017). 5 things you need to know about cassava flour. Retrieved from https://downshiftology.com/5-things-you-need-to-know-about-cassava-flour/

Dresden, D. (2018). What to know about cassava: Nutrition and toxicity. Retrieved from https://www.medicalnewstoday.com/articles/323756.php

Esposito, S. (2014). How to make feijoada, Brazil’s national dish, including a recipe from Emeril Lagasse. Retrieved from https://www.smithsonianmag.com/arts-culture/Celebrate-Brazil-with-Emerils-Feijoada-180951699/#ZbIstjl6ZBHQJxrw.99

McDermott, A. (2016). 11 healthy nutrition facts about tapioca. Retrieved from https://www.medicalnewstoday.com/articles/318411.php

Stockton, C. (2015). What is it? Wednesday: Tapioca flour/starch. Retrieved from https://www.bobsredmill.com/blog/healthy-living/what-is-it-wednesday-tapioca-flourstarch/

Katie is a certified herbalist and holistic health coach in San Diego where she runs a community pop-up shop that provides herbal and wellness education to the community. She is passionate about natural living, herbalism, aromatherapy, wellness, and spirituality. Connect with her on her website, Etsy shop, or Instagram.