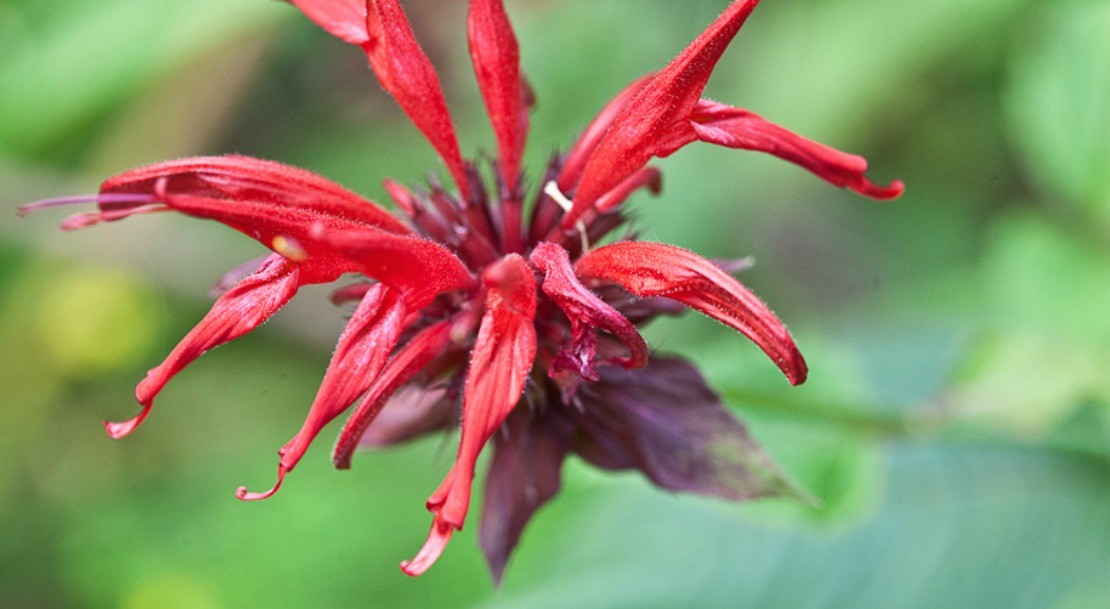 Bee balm is the common name of both Monarda didyma, which has red flowers, or Monarda fistulosa, which can have lavender, pink, or white flowers. M. didyma and M. fistulosa are two of the most popular species among the seventeen species and over fifty cultivars of the plant. One or more of them are found nearly everywhere in North America (USDA).

In addition to bee balm, Monarda, bergamot, and Oswego tea are some of the common names of Monarda didyma. Each name has a very good reason why it was used: Bee balm, since the bees love it; bergamot due to its aroma, which is reminiscent of the bergamot orange; Oswego tea because Native American people in the Oswego, NY region used it for teas.

From my experience, the M. didyma and Monarda fistulosa can be used interchangeably. Here in Wisconsin, the Oneidas use M. fistulosa and so that’s the one I’ve used. But I know in the east, M. didyma is used for similar purposes, probably because it’s more abundant.

The Monarda plant was named for the Spanish physician and botanist Dr. Nicolas Monardes of Seville Spain (DOB was 1493 – 1588) (Bremness, 1994). Monardes wrote the book Joyful News – Botany of the New World (North America). He tried to keep the new plants’ native names when “renaming” them. Interestingly, for the amount of knowledge he developed about new world plants, he never actually visited North America but had his people bring them back to his gardens in Spain. His book on North American plants was translated into English in 1577.

Monarda is in the Lamiaceae (mint) family and is a perennial from Zones 4 – 9. It has the mint family’s trademark – square stems and opposite leaves. It likes sunny locations, but will grow in partial shade. M. fistulosa can reach five feet tall in the Plains of North America, with M. didyma about three feet tall. It is pollinated by bees, so it is a good one to grow in your gardens to help our ailing bee population. This is a plant that will grow in heavy clay soils tolerating the wetness fairly well.

The flowers are interesting – they’re tubular and begin flowering in July and last into September. Crush one – it really does smell like bergamot, the one used in Earl Grey tea. (The essential oil bergamot is the orange-like plant, not Monarda.)

These are best propagated by root division in the spring. Stem cuttings are tricky but can be done. Wait until they’re at least four to five inches for best results.

Seed is readily available and takes between 10 and 40 days to germinate. Each flower has four nut-like seeds in each; stratify the seeds prior to planting. (I keep them in the refrigerator over winter and plant in the spring.) These will self-sow but unlike other mints, will not get too invasive. (If you love a particular plant, is it really ever invasive?) My experience has shown that those sown by seed or naturally self-pollinated have larger flowers than the stem cuttings.

The biggest problem with Monarda is powdery mildew, especially in conditions of high humidity. Many are now hybridized to eliminate the problem of powdery mildew but I wonder how many of the constituents we count on are removed or compromised in the process of eliminating the mildew. I just accept that my plants will mildew and plan my harvesting around that fact.

Dry them quickly out of the sun, and since they are in the mint family and will reabsorb moisture, once dried, put them in air tight glass containers. Be sure to harvest when you can, since it’s difficult to find dried bee balm for sale.

This is a North American native plant and as such, there are not written records going back thousands of years.

It is generally believed that after the Boston Tea Party when the English tea was tossed overboard, Monarda was the plant used to make the tea the colonists craved. (Later they turned to what they considered more patriotic – coffee.)

In the language of flowers, Monarda symbolizes compassion and sympathy.

When the seeds were sent across the Atlantic and grown, it was given the names of golden melissa and Indian nettle.

The flowers when they are fully opened and the young leaves prior to the flowers blooming are the parts to harvest. If conditions in your area are perfect, try cutting the plant back immediately after it flowers, and you can sometimes get a second flowering.

I work as an auditor for the Oneida Nation who came to Wisconsin in the early 1800’s. Monarda was common in their original homeland in New York. Mondara fistulosa is currently referred to by the Onedia as “#6” and is available at my local health food store without cost for those who need it for an upper respiratory tea. Right now the Monarda fistulosa is in full bloom and we’re all busy harvesting.

Due to the presence of a high thymol content which is a strong antiseptic (also in thyme), Monarda has been used in infusion form for a variety of ailments in its long past: colds, flu, upper respiratory problems, gas, diarrhea, nausea, fevers and whooping cough, and topically for skin problems and wounds.

The boiled leaves were historically wrapped in cloth for sore eyes, headaches, muscle spasms, fungal infections, and under bandages to slow bleeding. The leaves were chewed on battlefields and used for this purpose.

Used as a mouthwash, a strong infusion seems to give relief from sore throats, toothaches, and mouth sores.

I’ve made monarda honey, elixirs, and oxymels, all of which are helpful and tasty. Monarda honey isn’t only great in teas, but also on burns and other wounds.

FIND OUT HOW HERE: https://theherbalacademy.com/herbal-honey-recipes-for-kids/

The leaves are helpful in steams to clear the sinus and to make the whole house smell nice! They can also be added to a sock or muslin bag and thrown in your bath for the same effect, and additionally if have sore, tired or achy muscles. Tired sore feet love a good foot soak, and these are helpful in this arena, too.

Like other mints, Monarda also makes itself known in the culinary aspects of herbalism.

If you’re into hunting, try it in apple cider vinegar as a marinade on wild game.

The crystallized flowers can be made ahead (and stored in airtight containers) and used as decorations on cakes. Monarda sugar on scones and cookies gives them a whole new dimension.

Using your favorite recipes – try using Monarda in jellies, sorbets, and syrups. It adds a spiciness rather than mintiness.

Adding orange peels to your tea will enhance the bergamot flavor.

There are other cultivars you can use, I’m familiar with the two we grow here. Unscientifically, I feel the M. fistulosa seems to have more medicinal properties, but the M. didyma tastes better. I like the red petals in salads for a spicy taste and for its appearance! The red flower reminds me of a miniature firework going off! However, the M. fistulosa grows everywhere and I usually end up using that one for most purposes.

The Monarda/bee balm/bergamot is growing in most locations during the summer season, so I hope you can locate and harvest some to use. If you are unsure, find someone who can identify, without a doubt, this useful plant. Foraging is never the time for a “best guess”!

If you’ve never played with the Monarda family, I hope this will be the year you do!