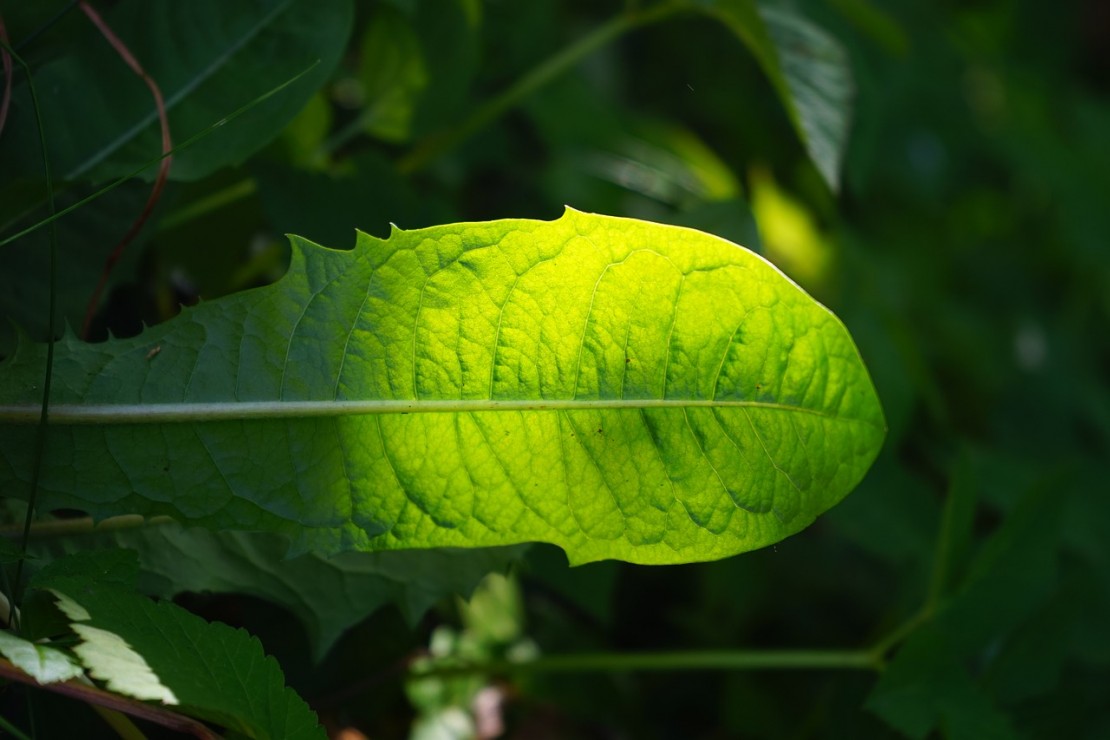 Spring is just around the corner and foragers everywhere are looking forward to the first spring foliage as it bursts from the earth. For centuries, humans counted on spring’s nutrient rich plants for food and nourishment after a long winter consuming stored foods. While fresh food is now available all year round for most Westerners, many of us still like to walk in the steps as our hunter and gatherer ancestors.

As foraging is becoming more popular, there are a few things you should remember:

6 Spring Herbs You Can Forage Now 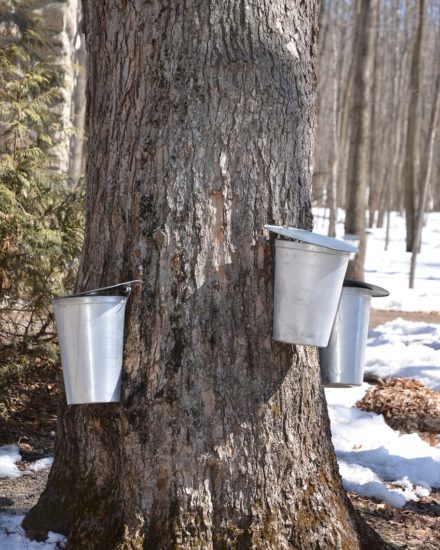 Most of us love maple syrup, sugar, and candy, and thankfully, maple sap is something you can forage now that will lend itself to sweet concoctions.

A common belief is that only sugar maples are tapped, but there are several different trees that can be tapped. Most of the maples and some trees in the birch and walnut families are also tapped with varying degrees of sugar content. We tap our silver maples (a very easy and fast growing tree). The result is a syrup that has more of a vanilla taste than the sugar maples. We tried a white birch one year, but the amount of sap didn’t justify the effort so we’ve stuck to our silver maples.

Equipment can be purchased at this time of year at many hardware stores as tapping is becoming more popular. The actual tapping is the easy part. Once the tap is in the tree, we try to get the first drop as the taste is subtle but refreshing.

To make a syrup is a long process, taking hours or even days. The sap must be boiled at a constant temperature. Don’t expect a lot of syrup either! In our area, generally, 80 gallons of sap equates to about two gallons of syrup.

The sap can also be frozen. A special treat for us is to freeze about ten gallons of sap in March and then boil it down in July! 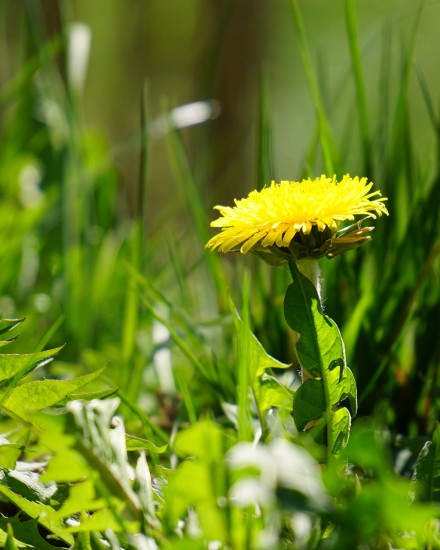 Everyone knows dandelions! This plant is native to Eurasia and was probably brought to North America by the colonists as an important food and medicine source that they just couldn’t leave behind. Its nutrition includes iron, manganese, phosphorus, and vitamin A (Pederson, 2011).

One of the first plants of spring, the young leaves are gathered and added in salads. It’s a good idea to only use the young smaller leaves as, the older and larger they get, they more bitter they become. Many herbalists actually prefer the bitter leaves as a spring tonic, though, so the choice is up to you. The flowers can be fried as fritters, added to salads, and of course, used to make dandelion wine. When working with the flowers, plan on working fast as they begin to close shortly after they are picked.

What else are dandelions used for? Well, dandelion jelly, marmalade, soup, cookies, and added to other greens with pestos. We also dry the roots and use them for decoctions.

This common spring plant is quite versatile. 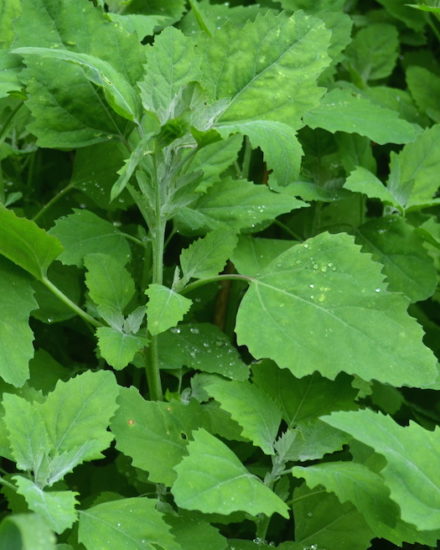 You may recognize this by one of its other names: Pigweed, wild spinach, or goosefoot (from the shape of its leaf).

Lamb’s quarters is native to North America, Europe and Asia. It’s an annual and usually grows to about 18 – 24 inches tall, but has been known to grow to seven feet! The leaves are dark green and have whitish to grayish undersides. It is easily grown and is found in fields and ditches. It doesn’t mind poor soils and is drought tolerant.

Gather it in early to mid-spring; the earlier plants are more tender than older plants. The young leaves can be thrown in salads but also used as a cooked green. We’ve included it in a mixed veggie lasagna, scrambled eggs, quiches, frittatas, and sautéed.

It has a mild flavor, much like spinach (they are related), but some people are sensitive to it, causing their tongues to become irritated (Thayer, 2006). If you have never tried it, nibble a tiny piece first to see if you have a reaction, or avoid it all together.

Later in the season, lamb’s quarters seed can be harvested, dried, the chaff removed, and then ground into a flour that resembles buckwheat in appearance and taste. 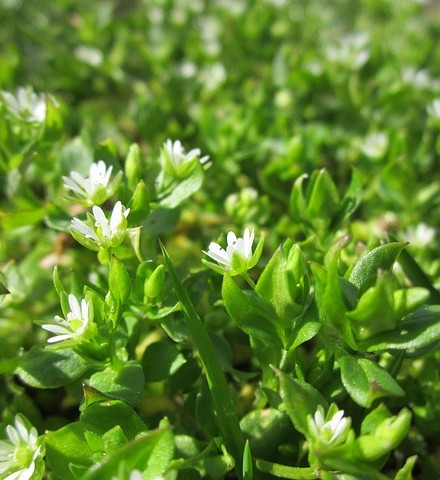 Chickweed is another plant to throw into your spring salad mix and is one of the first we harvest. Its common names include mouse ear and star flower.

It is a cool weather plant so it is only available in the early spring and later in the fall when cooler temperatures prevail. It is a low grower that will appear to die off after flowering or when the weather turns too warm, but it generally returns in the same spot when the heat of summer passes.

Chickweed has tiny white flowers with five very deeply notched petals that makes them look like they have ten petals. You can identify chickweed by looking at the tiny hairs (a magnifying glass would come in handy here) running up on one side of  stem in a line. At each leaf node, the line of tiny hairs switches sides.

Besides being yet another salad green, the leaves can be added to other greens to make a delicious pesto! Like many other early spring greens, try adding it to various dishes. It doesn’t make a good potherb though, because it becomes a bit slimy.

Don’t forget to dry some for teas during the winter. It is used to help skin conditions (both as a tea and in salve form) and has also been used in teas for upper respiratory problems. This tiny little plant is filled with nutrients including iron, calcium, magnesium manganese, zinc, potassium and vitamins B and C (Pederson, 2011). 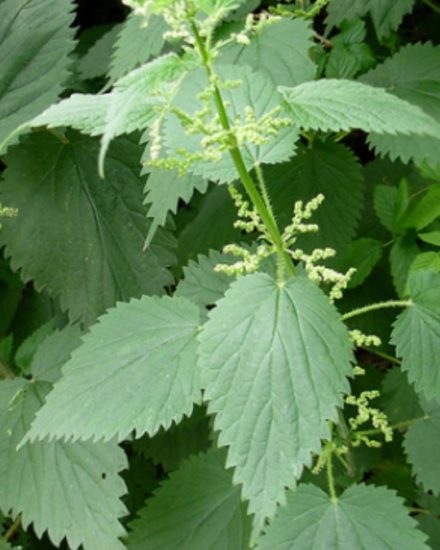 Of all the spring forages, my favorite is nettle. We have lots of nettle growing all around the property. I closely watch it as it comes out of the ground and grows. I harvest when it is less than 18” and only take the unblemished leaves. You should wear gloves if you aren’t used to working with nettle—it will sting you. The sting ranges from mild to a red rash.

Nettle is a powerhouse and can be used in many dishes or dried for teas. I personally love nettle soups (there are many different recipes). I make nettle barley broth, pasta, quiches, and pestos. (Note: Nettle leaves should be blanched prior to adding them to a pesto and then blended to remove the sting.) The dried leaf powdered added can be used to make a nettle shortbread which is a lovely green and tastes just as it sounds, like nettle shortbread. Nettle has also been used to make beer in the past.

I found nettle paper in Scotland on a visit to their local market. Interestingly, with the material not used, small paper mache type bowls were made. I haven’t tried this yet, but it is on my to-do list! 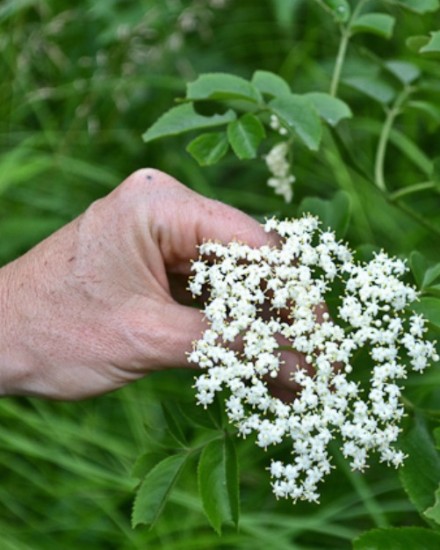 Just about the time the chickweed is dying back, the elderflowers are appearing in our area and the forage continues. There are several large white fluffy flowers that appear about the same time; be sure you’re . Take an experienced forager to help you identify it the first time. Once you get a whiff, though, you’ll probably never forget it.

An old recipe for supporting the body during a cold is equal parts dried elderflower, dried mint, and dried yarrow. All of these plants are out at about the same time and ready to be harvested.

Each year we enjoy elderflower fritters, made by dipping the flowers in pancake batter and deep frying it. We use the stems as handles, but they should not be eaten. I also make elderflower cordials, which can be used as a simple cordial, or an equal amount of sparkling water added. The syrup freezes well to allow enjoyment all winter long!

I make a simple syrup (1/2 water and 1/2 sugar) and heat until the sugar is dissolved. Add the juice of one lemon. Then add the elderflower heads, stem up (the flowers should be submersed, but not the stems) and let them sit for 3 – 4 hours, off the heat. Strain and drink, or save it for later.

Pestos are another dish that aren’t just for basil anymore!  Try adding any of the edible leaves to a mix or alone in pestos. We harvest the dreaded weed, garlic mustard, and add it to our pestos.

I’m a new beginner mead maker. One of my favorite recipes is Wild Flower Mead that includes flowers from dandelions, violets, elderflowers, and purple clover among others. You can find the complete recipe and directions in Make Mead Like a Viking (Zimmerman, 2015).

(You can also learn more about making herbal beer, mead, and other ferments in Herbal Academy’s newest short course—The Craft of Herbal Fermentation.)

I hope I have armed you with some ideas for your own spring forage. Imagine a lovely green spring salad with yellow dandelion petals and violets ready for you. Usually the dressing I use is my fire cider (diluted down a bit) and that makes it just that much better! 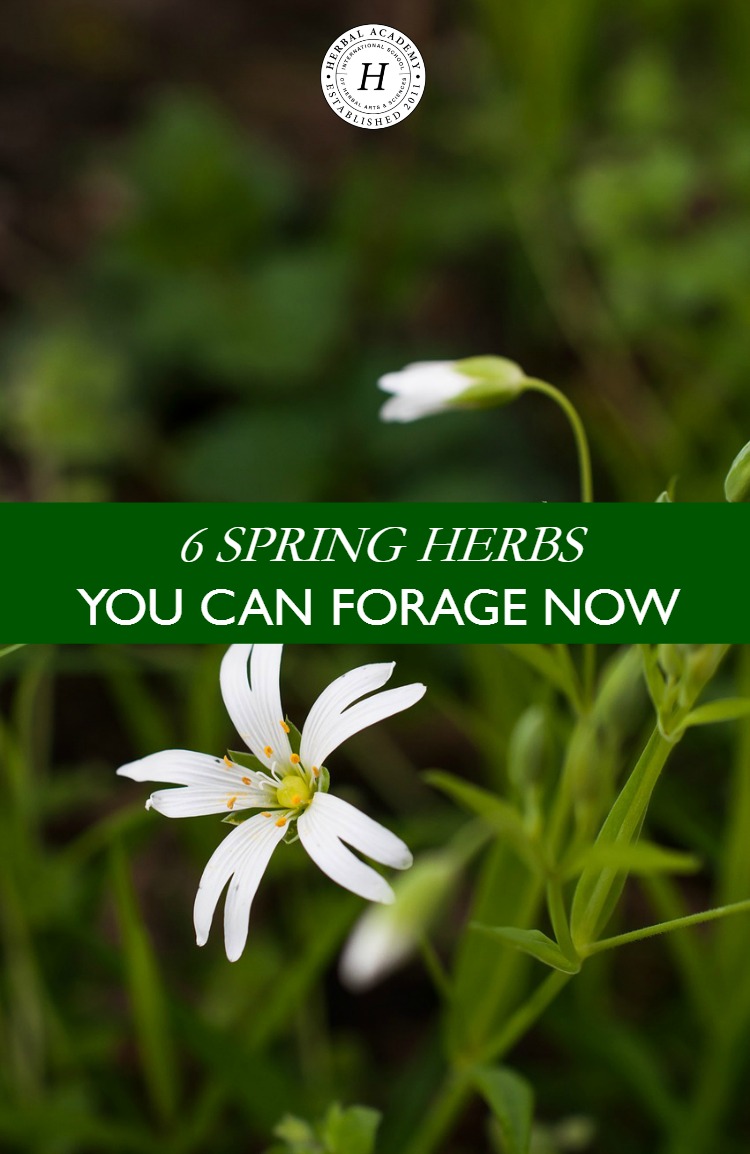