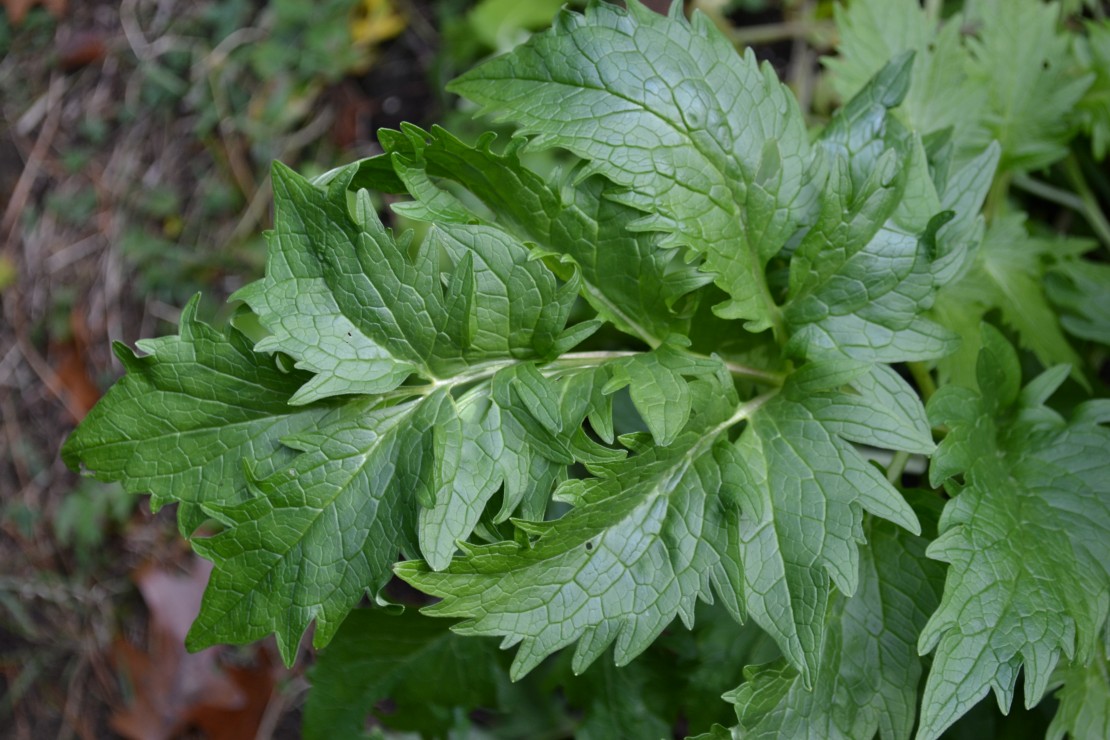 Over-the-counter pain relievers are a modern invention, but before they were available people relied on many different herbs to bring comfort during injury and illness. This article looks at twelve traditional pain relieving herbs and how herbalists approached their use. Many of these herbs have full profiles in our online learning resource, The Herbarium, and we’ve included several excerpts below to help illustrate these amazing herbs.

Many traditional pain relieving herbs have a long historic record of safe use, but some of the herbs included below should not be used during pregnancy or have other contraindications. If you are interested in incorporating herbs like the ones listed below into your wellness routines, please consult with your doctor or a qualified herbalist to determine what is best for your individual situation. 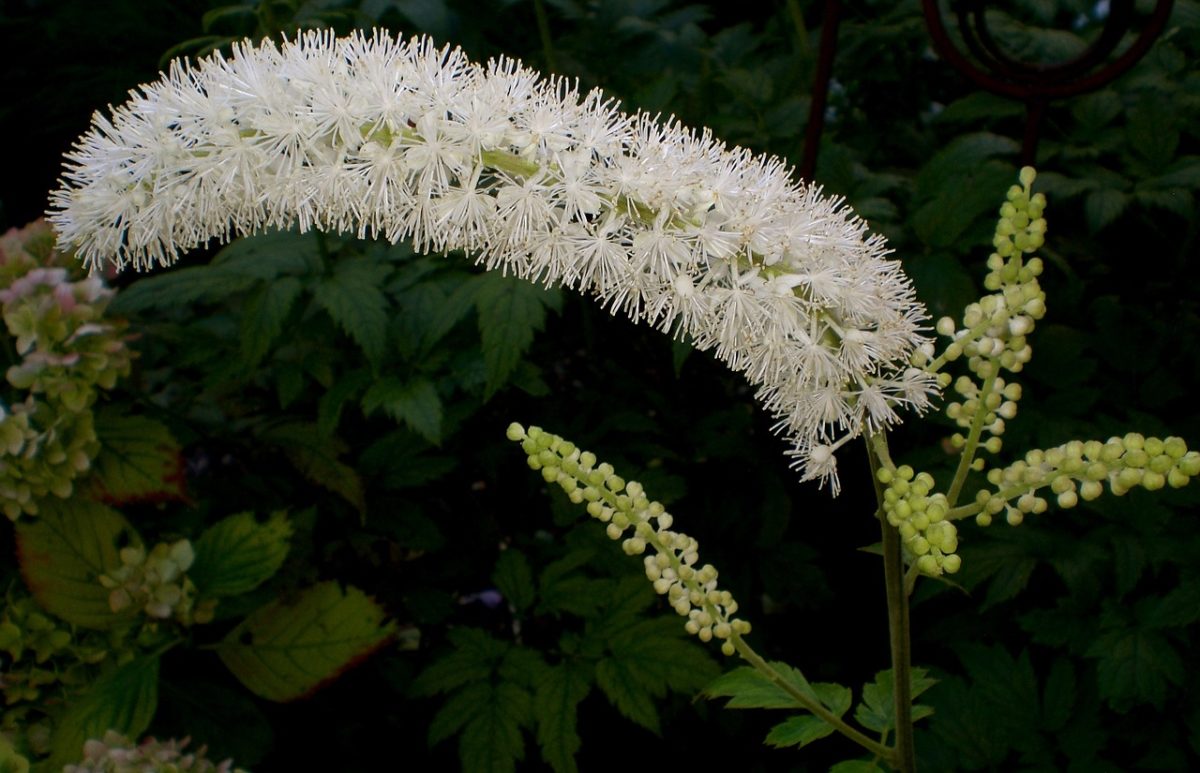 In modern use, black cohosh is often perceived as being a women’s remedy. However, this herb was traditionally valued for both men and women as an antispasmodic herb that is particularly useful for cramping and muscle pain of all types. It was also traditionally used for nerve related pain, whiplash, and pain related to spinal injuries (Wood, 2009). It appears to have anti-inflammatory properties (Hoffmann, 2003). 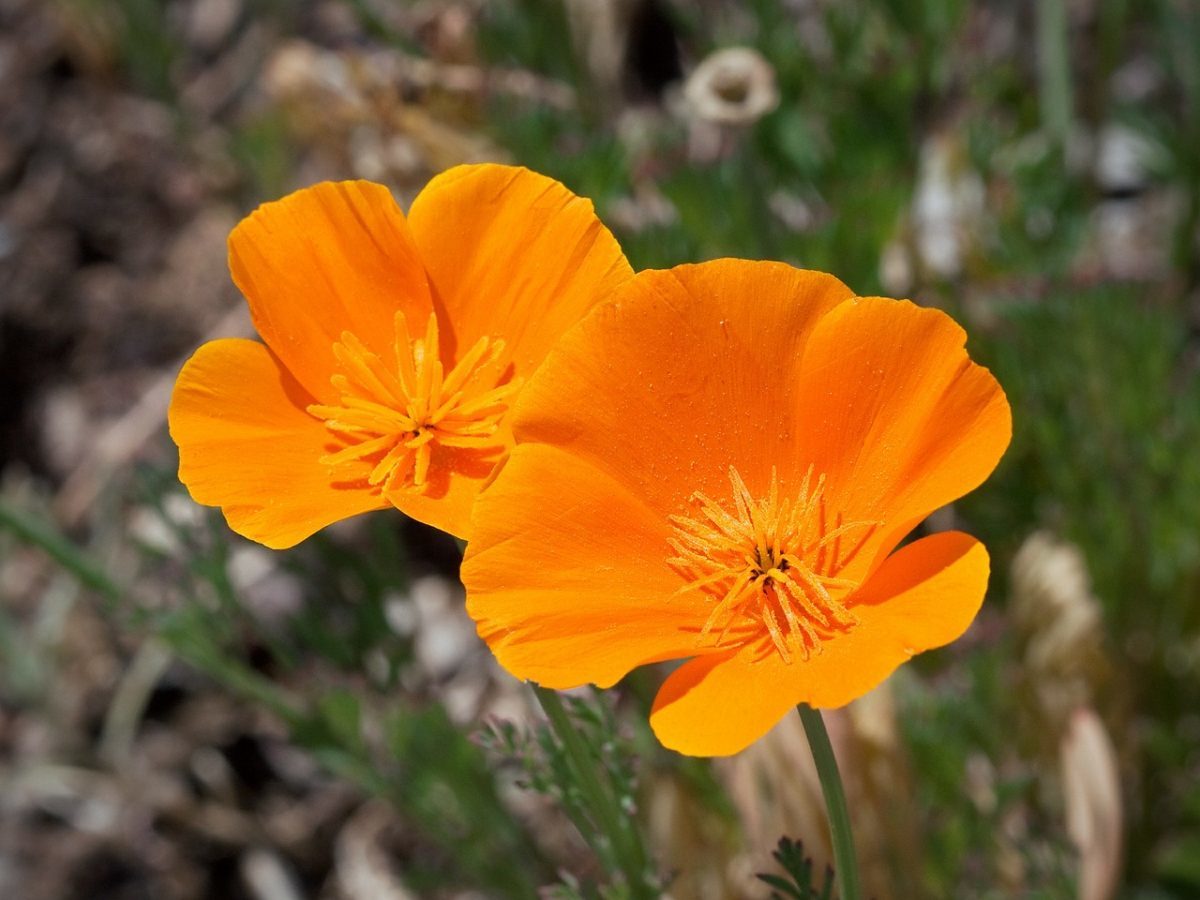 California poppy is a west-coast wildflower native to the United States. The blooms of this herb are a beautiful, sunny orange. California poppy has a reputation as a very safe, mild herb and is traditionally used for general pain (Shane, 2016). It is also sometimes used for sleeplessness in children (Hoffmann, 2003). Using more than the recommended amount can cause a headache or tiredness the day after use (Cech, 2000).

A distant relative of the poppy family, there are over 300 species of corydalis that have been used in traditional herbalism worldwide (Herbal Academy, n.d.). Corydalis is used for strong pain (Shane, 2016). Careful use guided by an experienced herbalist is a good idea because this herb can cause dizziness and nausea in some individuals, and it’s also best to avoid this herb during pregnancy (Herbal Academy, n.d.). From The Herbarium, we learn that:

“Western herbalists make use of golden smoke and other species for addressing issues in the central and peripheral nervous systems, including chronic pain, neuralgia, insomnia related to circular thinking or emotional/psychological over extension, nerve pain, muscle spasm, and nervous system disorders including Parkinson’s and Meniere’s diseases (Skenderi, 2003). In Chinese medicine, pain is most often considered a product of obstructed or stagnant Chi or blood, and blood-moving herbs like Corydalis address the pain through restoration of flow and relaxation of tension inhibiting flow (Li, 2002; Wu, 2005). From the Chinese perspective, invigorating and moving Qi and Blood contributes strongly to the dissipating pain caused by stagnation or stasis (Li, 2002). In this capacity, Corydalis is soothing to the Liver channels and regulating to the Qi, draining fiery excess. Corydalis is particularly indicated in disorders related to Liver depression, Qi stagnation, or Liver-Stomach disharmony (Li, 2002) (Herbal Academy, n.d.)” 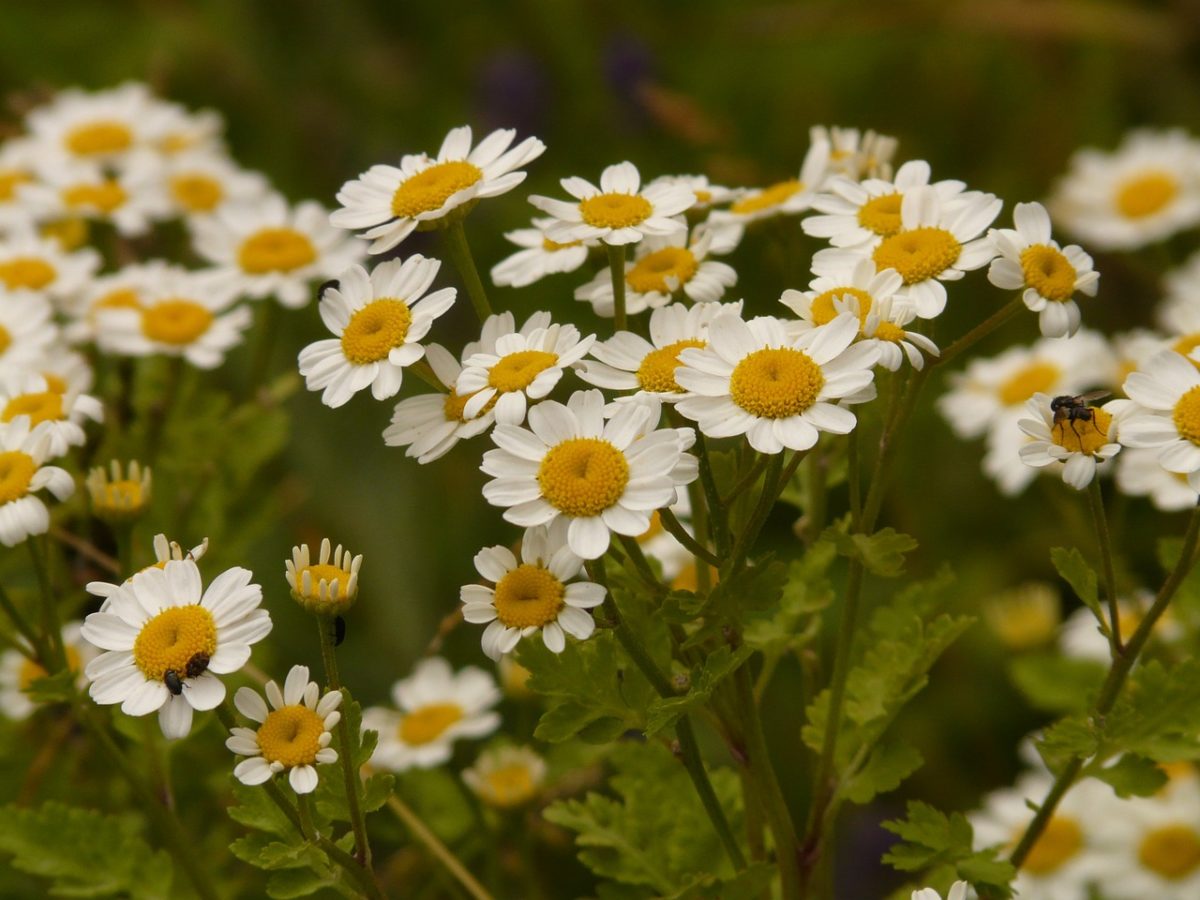 A sunflower family herb, feverfew has a reputation for usefulness in migraines (Shane, 2016), the inflammatory stages of arthritis and painful periods (Hoffmann, 2003). Because it is in the Asteraceae family, if you have allergies to ragweed or similar plants it may be best to avoid feverfew. Use of feverfew should be limited during pregnancy to no more than 1.5 mL of a 1:5 extract per day (Bone, 2003). This herb is best used after it has been dried because the fresh leaves can cause contact dermatitis and even irritation and swelling of the mouth and tongue (Bone, 2003).

Despite its name, this tree is not in the dogwood (Cornus) family at all. It’s a member of the pea (Fabaceae) family that is native to Florida, the West Indies, and Central America.

Jamaican dogwood is considered to be a powerful remedy for painful conditions (Hoffmann, 2003), and especially for strong pain or pain that involves the muscles of the body (Shane, 2016). Modern herbalists are somewhat divided when it comes to the use of this herb. It is traditionally used as a fish poison, although it is not considered to be poisonous to humans (Hoffmann, 2003). However, it does contain rotenone (often used in an isolated form as a pesticide), and so some sources advise caution when using this herb (Ehrlich, 2015). Use with the supervision of a doctor and an experienced herbal practitioner. It should not be used during pregnancy and lactation (Hoffmann, 2003).

Kava kava is a Polynesian herb with a tradition of use for calming, relaxing, and soothing pain. There is some concern that kava may be damaging to the liver (Hoffmann, 2003), so it may be best to avoid the use of kava when there is a pre-existing liver condition. Originally prepared as a beverage, another interesting application for kava kava stems from the mildly numbing, tingling sensation the extract can cause when it comes in contact with mucus membranes, which makes it a mild local anesthetic for oral health (Hoffmann, 2003). Kava can also be used topically as an infused oil for the muscles (Herbal Academy, n.d.). This herb has a rich cultural tradition behind it:

“Kava has an incredibly rich tradition throughout the island cultures of the Pacific, having as much of a major impact in those cultures as coffee or alcohol does in the west. It is surmised to have been first domesticated from a wild precursor about three thousand years ago in what is now northern Vanuatu (Lebot et al., 1993). Traditionally, it has been used as a medicine that supports connection and enhanced communication between individuals, between cultures, and even between humans and the divine. Kava is a social lubricant in the political arena—to this day, visiting dignitaries and heads of state are offered the traditional brew. It has been said of kava that “hate cannot exist” in its presence (McDonald, n.d.), whether that manifests as angst between spouses or opposing sides of a community conflict. This same relaxing energy translates to the physiological, as used in traditional Western herbalism (Herbal Academy, n.d.).” 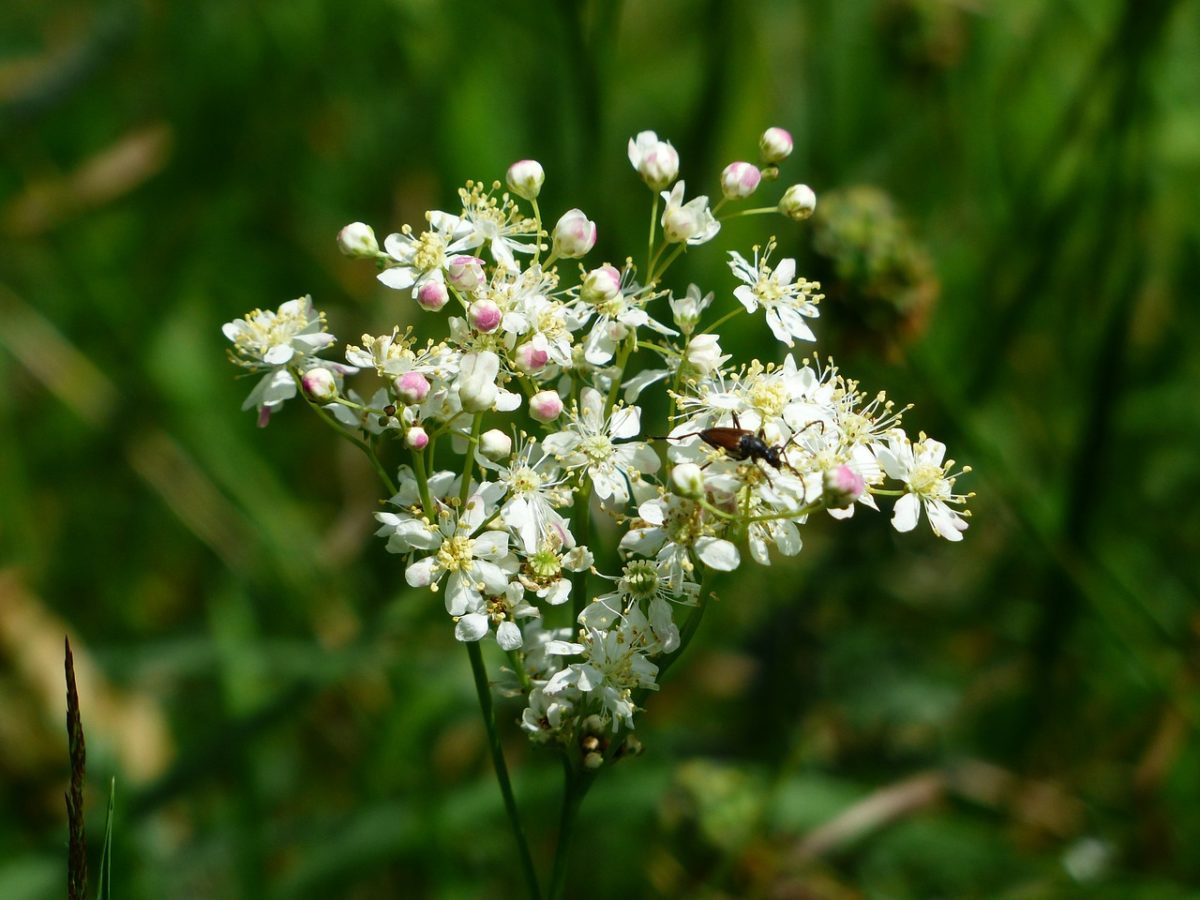 Also known as Queen of the Meadow, this beautiful herb from the Rosaceae family is native to Europe but has also naturalized in parts of the United States. Meadowsweet appears to have analgesic properties and has traditionally been used for general pain (Shane, 2016), and also pain associated with arthritis and the flu (Wood, 2009). Meadowsweet contains salicylates and should be avoided by people who have an allergy or sensitivity to them (Hoffmann, 2003), or children with or recovering from a viral illness.

Prickly ash is a small tree native to the Eastern part of North America with a reputation among herbalists as a nervine useful when there is a strong pain (Wood, 2009). This herb is a diffusive and circulatory stimulant, and extracts can cause a tingling sensation in the mouth or when applied on the skin. It can be used topically as a liniment for rheumatic pain (Hoffmann, 2003).

Although it is well known as a nervine to support emotional health, St. John’s wort has also been used to provide balance in the presence of pain. In particular, St. John’s wort has been viewed as helpful when the nervous system is involved, for neuralgic and rheumatic pain (Hoffmann, 2003). Matthew Wood describes St. John’s wort as being one of the most important herbal pain relievers, and says it is especially helpful for sharp, needle-like pains or injuries to parts of the body that are rich in nerves (Wood, 2009). This herb can be used topically or internally. Internally, St. John’s wort may potentially interact with a number of different medications, including oral contraceptives (Hoffmann, 2003). 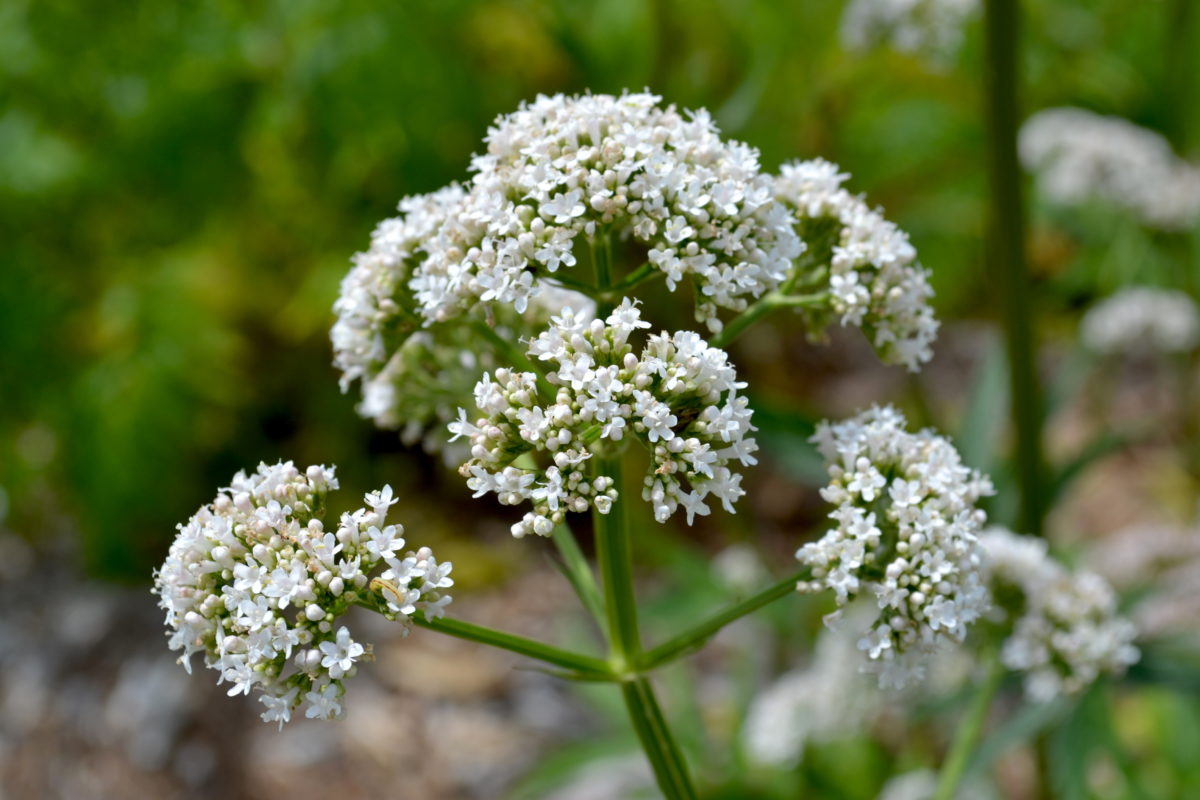 Valerian is well known for the unusual and off-putting odor of its roots! Native to Europe, valerian is often grown as a garden plant and makes a tall, stately addition to flower beds with its beautiful, vanilla scented blooms. Despite the smell of the roots, they are the most commonly used part. Valerian has been used as an antispasmodic, for tension, and for relief from general aches and pains (Hoffmann, 2003).

Matthew Wood outlines some of the specific indications that he has found wild lettuce to be most useful for, which includes pain arising from Cold; stiff, sore muscles and lower back; and colic pains (Wood, 2008). A member of the Asteraceae family, like feverfew and chamomile, wild lettuce may not be a good choice for individuals who have allergies to ragweed or other members of this family (Hoffmann, 2003). 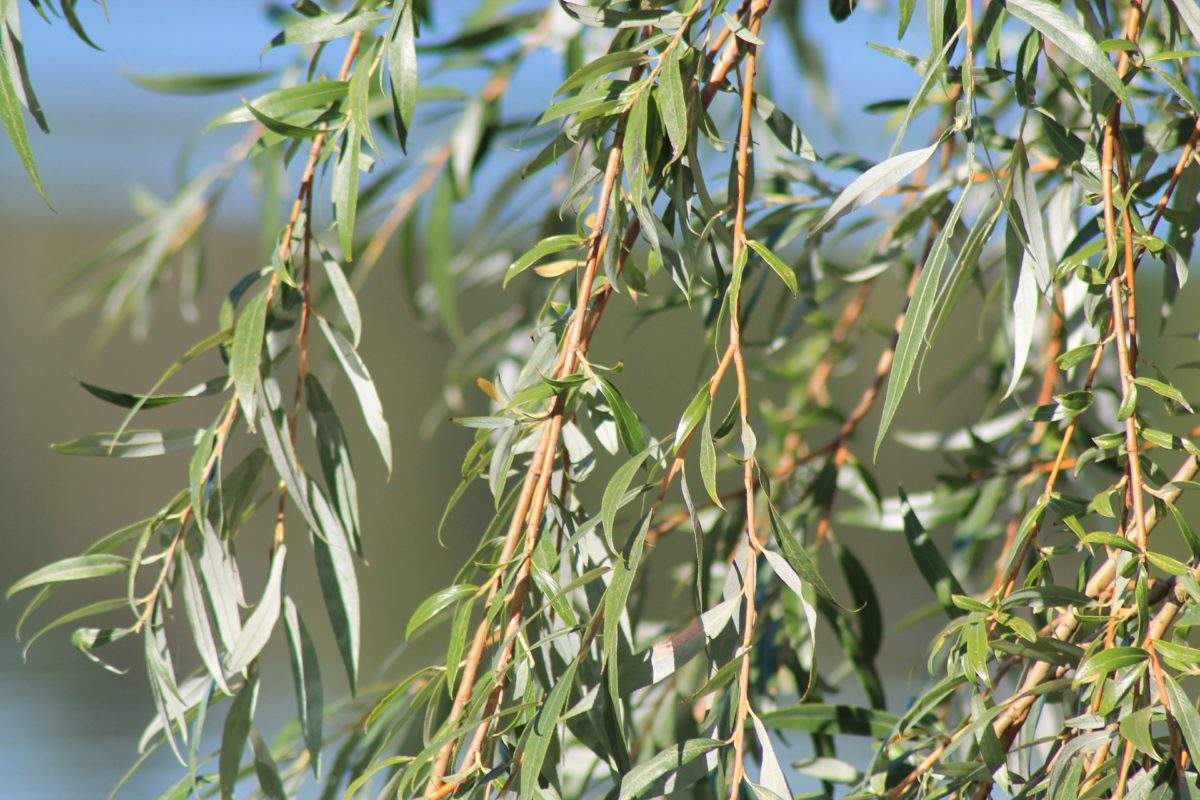 Willow is the original source of salicylic acids used to make aspirin, and so was traditionally used for general aches and pains, rheumatism, fevers, and gout (Hoffmann, 2003). Many Native American tribes made use of willow, too, including the Cree, Huron, Mohawk, and Cherokee (Herbal Academy, n.d.), and traditions as diverse as Traditional Chinese Medicine and the Ancient Greeks.

“Historically, willow has seen broad medicinal use. Chinese practitioners used willow as early as 500 BC for its analgesic effects. Dioscorides recommended mixing mashed willow leaves with black pepper. Drunk with wine, the mixture was said to alleviate lower back pain. The ancient Greeks also infused willow bark and leaves in olive oil in large clay pots. Those suffering with arthritis immersed their joints in the oil to relieve pain and inflammation (Herbal Academy, n.d.)”

Herbs with traditional uses for pain make for a fascinating study, not just for the plants themselves but also for the historical customs surrounding their use. Many of the herbs in the list above can be found within the monograph database of The Herbarium. This online learning resource provides full length, carefully researched plant profiles that include more information on the history and use of these herbs, standard serving sizes, and contraindications. 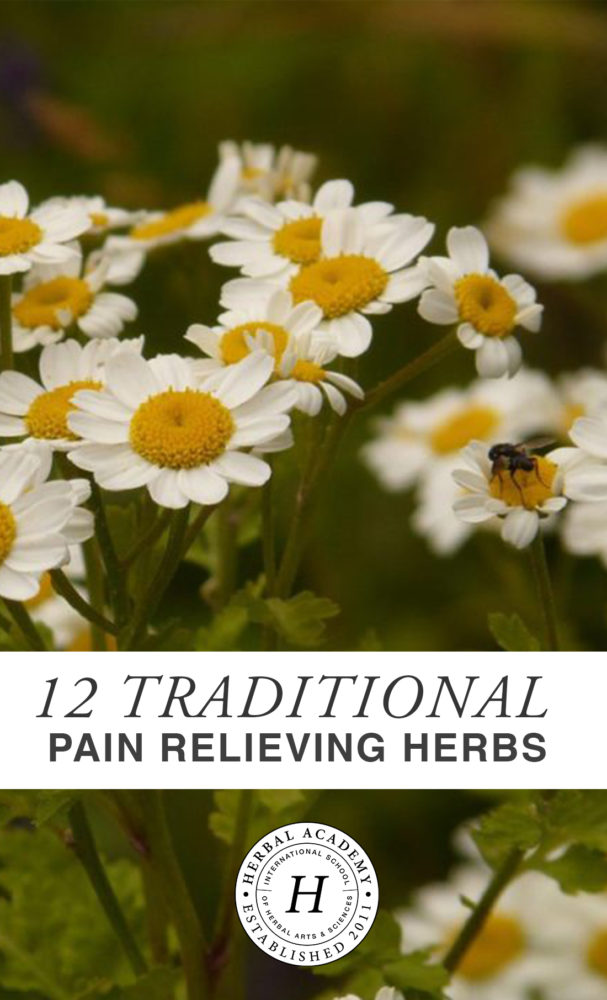