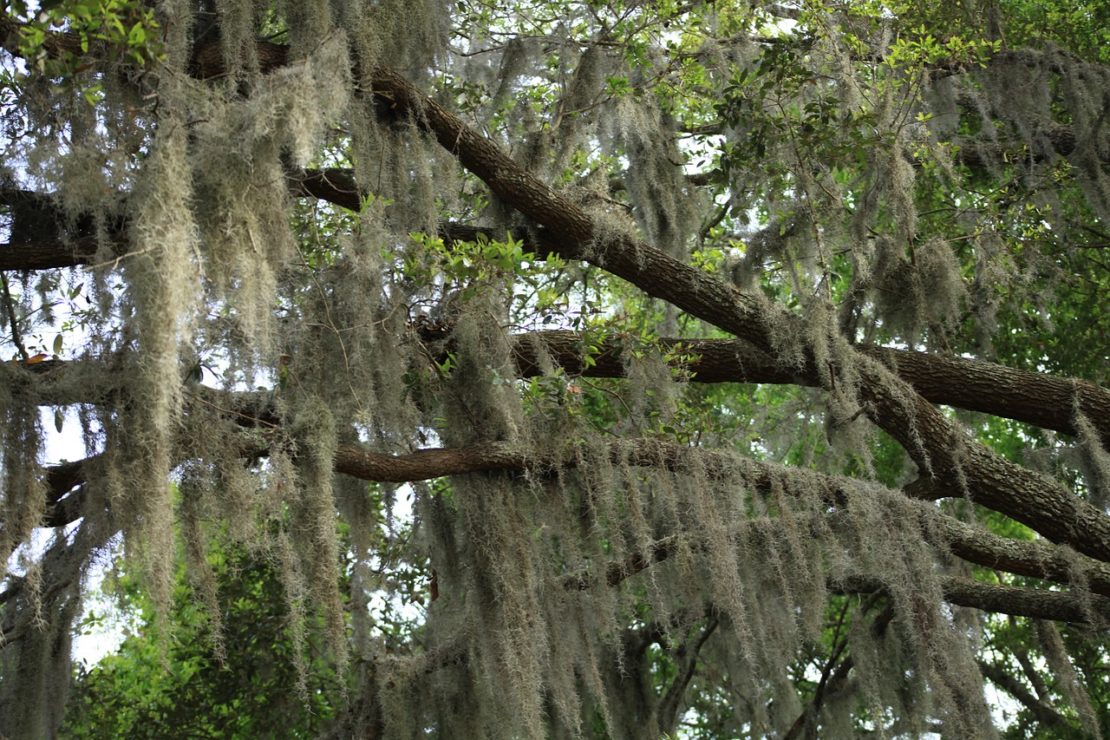 For starters, Spanish moss is neither Spanish in origin, nor is it moss! Spanish moss (Tillandsia usneoides) is actually an epiphyte, an “air plant” that grows hanging from tree branches, gathering its nutrients and water from the air. Although it’s native to Mexico, Central and South America, and the Caribbean, it has become naturalized in many tropical climates, from Argentina to Polynesia (Kew Royal Botanic Garden, 2016).

In the Georgia low country, where I live, Spanish moss thrives on live oaks and cypress trees, and it is found everywhere—from the swamps to the suburbs. Why does Spanish moss prefer live oaks and cypress trees rather than others? Interestingly, the leaves of these trees have higher rates of leaching minerals, which provides the plant an abundant supply of nutrients without harming the tree itself (Schlesinger, 1977).

Its specific name, usneoides, lets us know that it looks a lot like Usnea—another plant widely used by herbalists—but it has very different characteristics and uses, which we’ll get into in a bit.

Spanish moss is made of slender stems that connect to one another in a chain-like structure, with alternate, curly, needle-like leaves. It doesn’t have roots, but it does have the tiniest of flowers and seeds. Although it can propagate itself by seed (its seed pods burst in the winter, sending fluffy seeds through the air), Spanish moss is usually spread as fragments are blown away in the wind, and land in another tree’s branches. Birds also use it as nesting material (Florida Plant Encyclopedia, 2015).

Spanish moss actually looks much more like curly hair than like moss. Probably due to its striking appearance, there is plenty of folklore surrounding Spanish moss. Storyteller Mike Miller tells of a Spanish explorer who fell in love with a Native American woman, but was forbidden to marry her. When he refused to disavow his love and leave the land, he was tied to a tree, where his beard grew and grew, spreading from tree to tree even after his death.

In another version of the legend, a Spanish couple was murdered on their wedding day. As was custom, the bride’s hair was cut before the burial and hung from the live oak tree under which the couple was buried. Over the years, it grew gray and spread from tree to tree as a symbol of her undying love for her husband (Miller, n.d.). 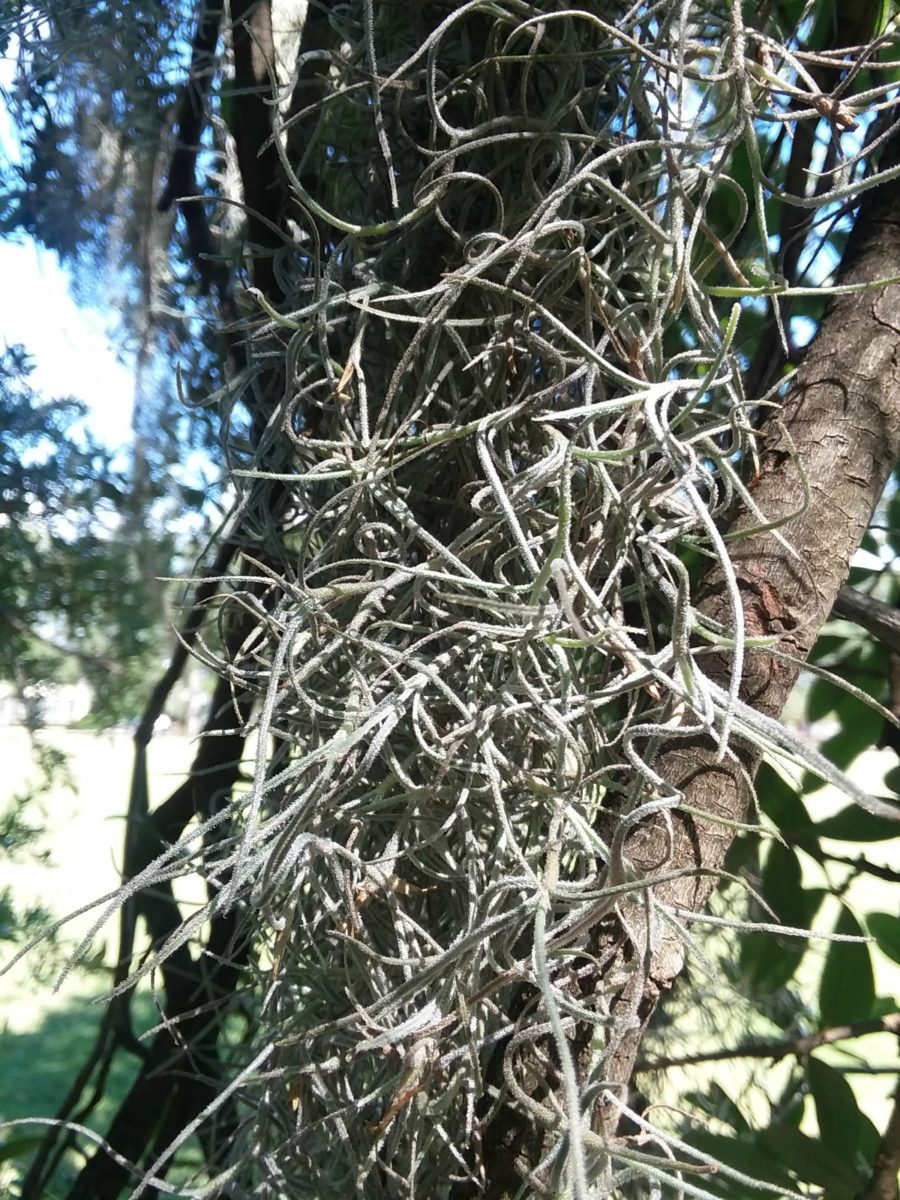 Even here in the South, these days you’re far more likely to see Spanish moss used in floral arrangements (because it’s great at holding water) and craft projects than taken therapeutically. And interestingly enough, Spanish moss is also used by scientists as an atmospheric biometer—that is, a barometer for measuring heavy metal pollution in the air and water and monitoring the effects of air and water quality. Think of this as the plant version of a canary in a coal mine!

Historically, Spanish moss was used by the Houma tribe of Louisiana in cases of fever and chills (Native American Ethnobotany Database, n.d.). It was also an important remedy among enslaved Africans in the Carolinas and Georgia, who used the plant to address diabetes and asthma, taken either as a tea or stuffed inside one’s shoes (Fett, 2000).

As is often is the case, modern science has come to confirm the value of this traditional wisdom—studies have confirmed its helpfulness in maintaining healthy blood glucose levels. After observing a tradition of use by residents of southern Louisiana to support diabetes, Purdue University researchers conducted an animal study on blood glucose, finding that it was indeed effective in lowering levels (Foster, 1996). Researchers have also found that of several compounds isolated from the plant, one in particular–3-hydroxy-3-methylglutaric acid (HMG)—significantly lowers blood sugar in laboratory mice, concluding that the compound could potentially be used as a diabetes treatment (Witherup et al., 1995). Today, HMG is an ingredient in a number of supplements intended to help lower glucose levels!

While there is no toxicity associated with Spanish moss, it can be host to a number of creepy crawlies (though not chiggers, as is popularly believed) as well as bats and snakes. For this reason, you’ll want to be sure your Spanish moss is very clean if you plan to consume it! In addition, Spanish moss available commercially in craft stores is heavily chemically treated, and definitely a no-no to consume therapeutically.