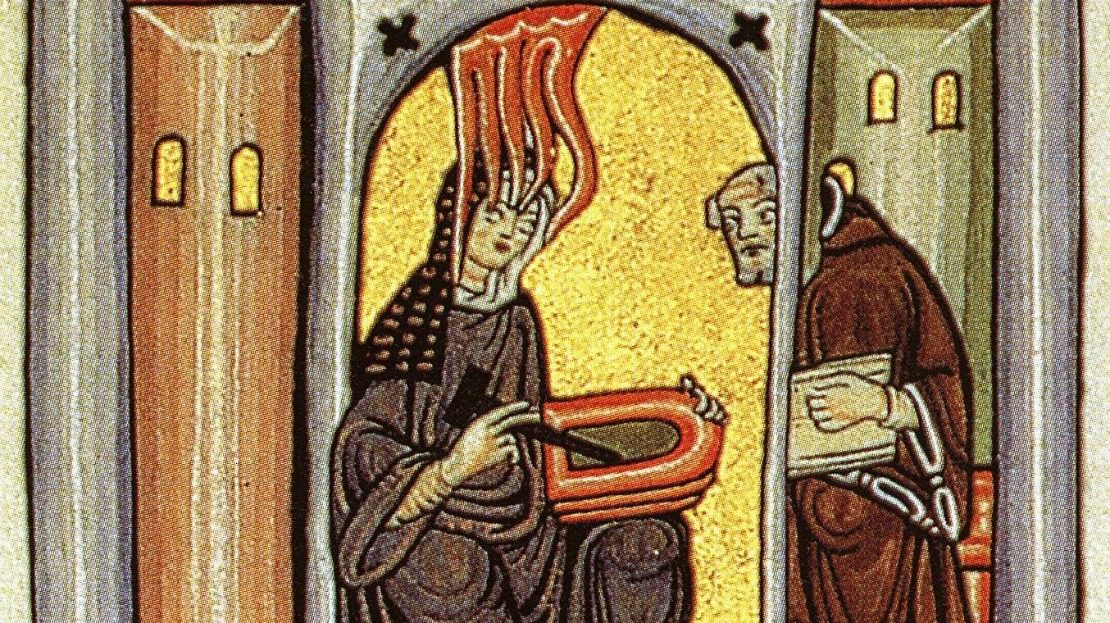 The Middle Ages brought us the Abbess Hildegard von Bingen, the Sybyl (Healer) of the Rhine, considered to be the first German Woman Physician and the mother of German Botany.

The Benedictine monastery at Mount St Disibode was to receive the young Hildegard when she was 8 years old. She had been promised to the church by her parents at birth as a servant of God. She eventually became the Abbess and would remain in the monastery until her death at the age of 81.

Hildegard of Bingen (1098-1179) was a mystic, scholar, prophet, composer, moralist, herbalist and scientist. Hildegard was the 10th child of Hildebert and Mechthilde. Born into a family of privilege, she was a sickly child who began experiencing mystical visions from a very young age that continued throughout her life. It was only later in life that she began to record these visions after seeking advice from a person who was highly regarded in the church, St. Bernard of Clairvaux, who encouraged her to write about her visions. She would also gain the respect of Pope Eugene lll who authorized her writings and encouraged her to speak about them in public forums.

When she reached the age of 60 she began to travel to talk to the people about religion and about her beliefs on sickness and cures. She was an advocate for those who were less fortunate in means and in spirit. She proclaimed that each human being deserved the opportunity to develop their individual talents and potential as one of God’s children. As word spread about the mystical healer she was highly sought out for counsel and healing by some of the most influential people of her time.

Holding authority at a time when it was virtually unheard of for women to be in direct power she was highly acclaimed for her religious and philosophical work.  She was also held in high regard for her musical compositions and poetry. She very intentionally and intrinsically wove science, art and religion together, each with its own beauty and power lending insight into the part as well as the whole.

She was most certainly a revolutionary visionary as she spoke up against the injustices that she witnessed. Often confronting the authorities of her day to demand change and reformation in the church, she also founded and oversaw for the first time the construction of a new women’s monastery separate and independent of the double monastery housing both female and male devotees.

From Hildegard we receive the word veriditas (pronounced ver id ee tas) meaning greenness and vital energy. Veriditas is the real and visceral energy and spirit of life on earth, and God in all of life. The plant world and every creature in nature is an expression of divine power on earth, veriditas.

Hildegard tended the gardens at Rupertsberg monastery and studied herbs extensively. She of course was not the first person to delve into the world of healing plants and may have very well read the works of those that went before her like Galen, the physician of ancient Rome or Pliny the Elder. She understood the healing properties as well as the magical qualities and employed both in her approach to healing. The three basics of Hildegard’s practice as an herbalist were detoxification, nutrition and natural remedies. This approach is not unlike modern day herbalists. Essentially she sought to purge the body of toxins, resupply the body with nutrients and treat specific disorders with herbs or other remedies found in nature. She stressed harmony between body mind and spirit very much like a naturopath or herbalist in today’s world. She also believed that God was the true healer.

Hildegard’s major works are on theology but she wrote two books on medicine and pharmacology. She wrote about the human body and how to treat many disorders using herbs, describing what she understood as the properties of the herbs that she used in healing from observation and practice. Some of her formulas and remedies remain relevant and are used today.

She was a visionary who was propelled from this physical realm on earth to a place of light and understanding which she referred to as God. She was also visionary in her approach to life. She sometimes did the unthinkable and probably suffered a great deal for doing so, but she forged forward and she blazed a trail for others to follow in medicine, religion and morality. Hildegard von Bingen touched many lives in her time on earth and she continues to reach across centuries with an uncanny contemporary view and doctrine. She relayed her visions and knowledge in written form but also used her voice to preach and to sing. She used symbols, mythology, metaphor and imagery that continue to spark our imaginations and senses today.