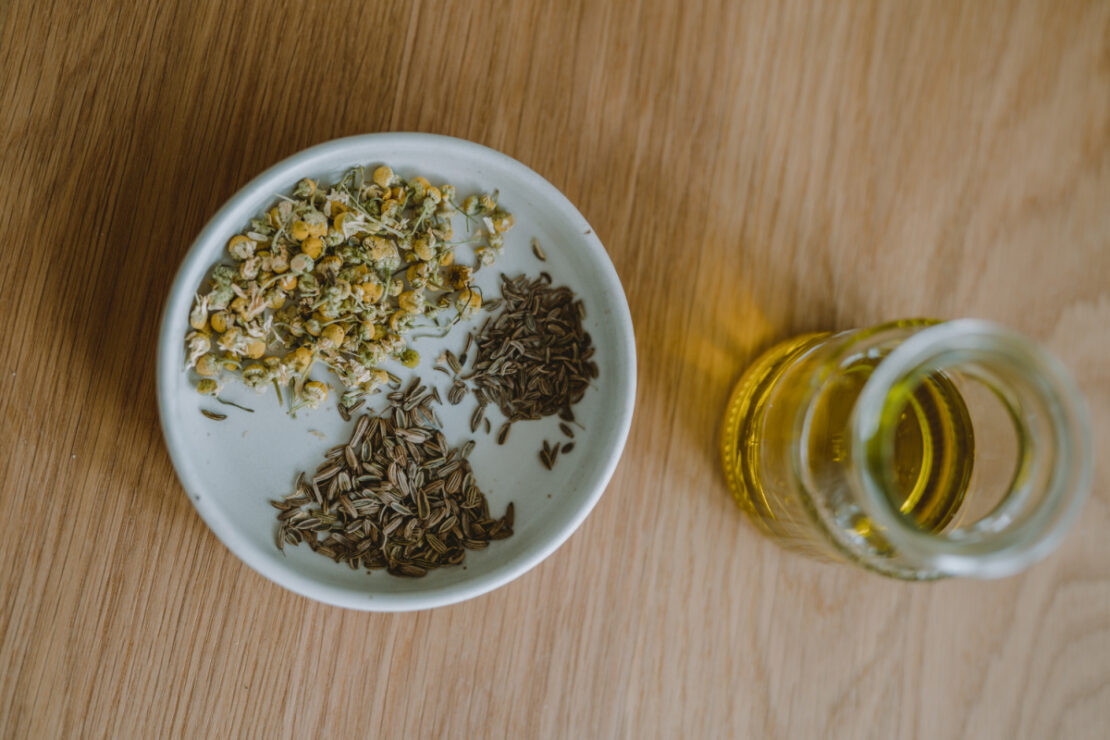 Tummy aches, or rather “excess wind”–as it is called in Chinese Medicine–is not uncommon in babies. Especially in the first 3 to 4 months (also called the “3-month colic”), the crampy belly often occurs.

Anthropologists have theorized that evolution has made a trade-off between our big human brains and the narrow pelvises we need for bipedal walking, resulting in babies born earlier than the ideal. Following this theory, it would take a gestation length of 18 to 21 months instead of 9 months for babies to be optimally developed (Schmidt 2015). This might be the reason why they are so dependent and sensitive at the beginning of their lives, especially in the digestive tract.

The first few months can be a challenging time for both baby and parent, especially when colic occurs. Finding ways to soothe a crampy belly is important to get through this period with more ease.

In this article, you will find an overview of some holistic approaches to colic and a recipe for a homemade herbal belly oil. 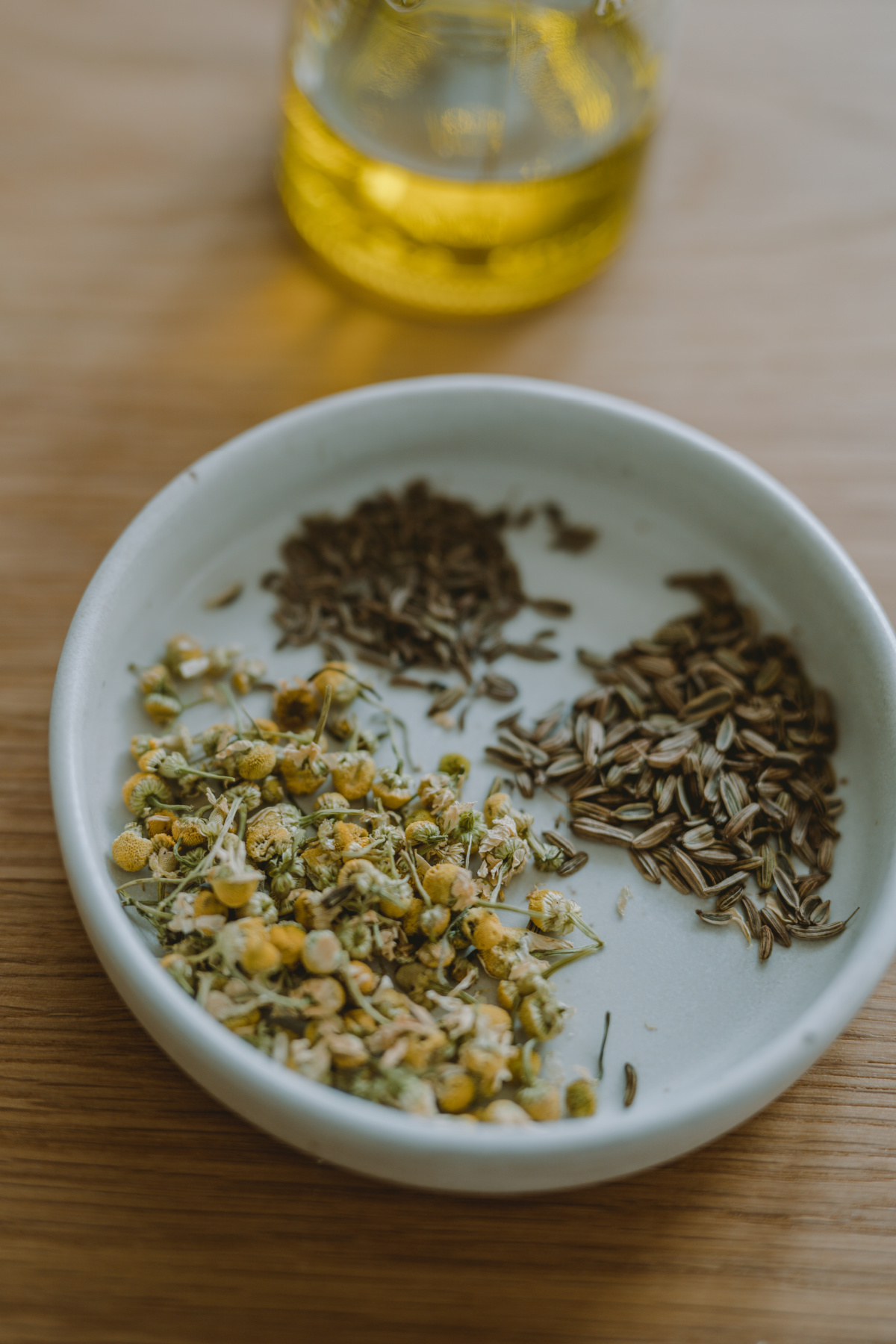 Natural Approaches for a Crampy Belly

As the reason for a crampy baby belly is often excess wind in the baby’s immature digestive tract, it can be helpful to burp the baby more often to make sure the swallowed air does not have to release through the bowel. Oftentimes, a gentle support in the form of warmth, like a bath or compress, or tummy time on a parent’s arm or chest can already soothe some tension inf the baby’s belly. Wearing the baby in a carrier or sling also helps to ease excess wind and, furthermore, regulate the baby’s nervous system through one’s own warmth, closeness, smell, and heartbeat.

If the colic is severe, extra support such as giving probiotics can make a huge difference. No matter how a baby enters the world, this might be a helpful choice. When a baby was not birthed vaginally for example and therefore was not inoculated with beneficial bacteria by passing through the birth canal, their gut is colonized later by different strains of environmental bacteria, such as skin flora and hospital bacteria. Furthermore, if the mother or baby is given antibiotics, a dysbiosis (microbial imbalance) can occur, which can contribute to poor digestion and can trigger colic.

There are baby-probiotic strains available, which can easily be combined with a few drops of breastmilk and formula to be given by bottle or spoon. Furthermore, if the mother is taking probiotics herself, it also benefits the baby through the breastmilk and even during pregnancy already.

It may be helpful to seek help from holistic health practitioners and even a chiropractor or osteopath to relieve possible tension from the birthing process in the baby’s body, as sometimes even small imbalances can lead to a crampy belly as well.

But in general, you can’t go wrong doing a gentle massage using a soothing herbal infused oil. This not only releases excess gas and tension from the belly, but the nurturing touch also relaxes the baby’s body and mind–while easing the caregiver’s– and strengthens those intimate relationships. 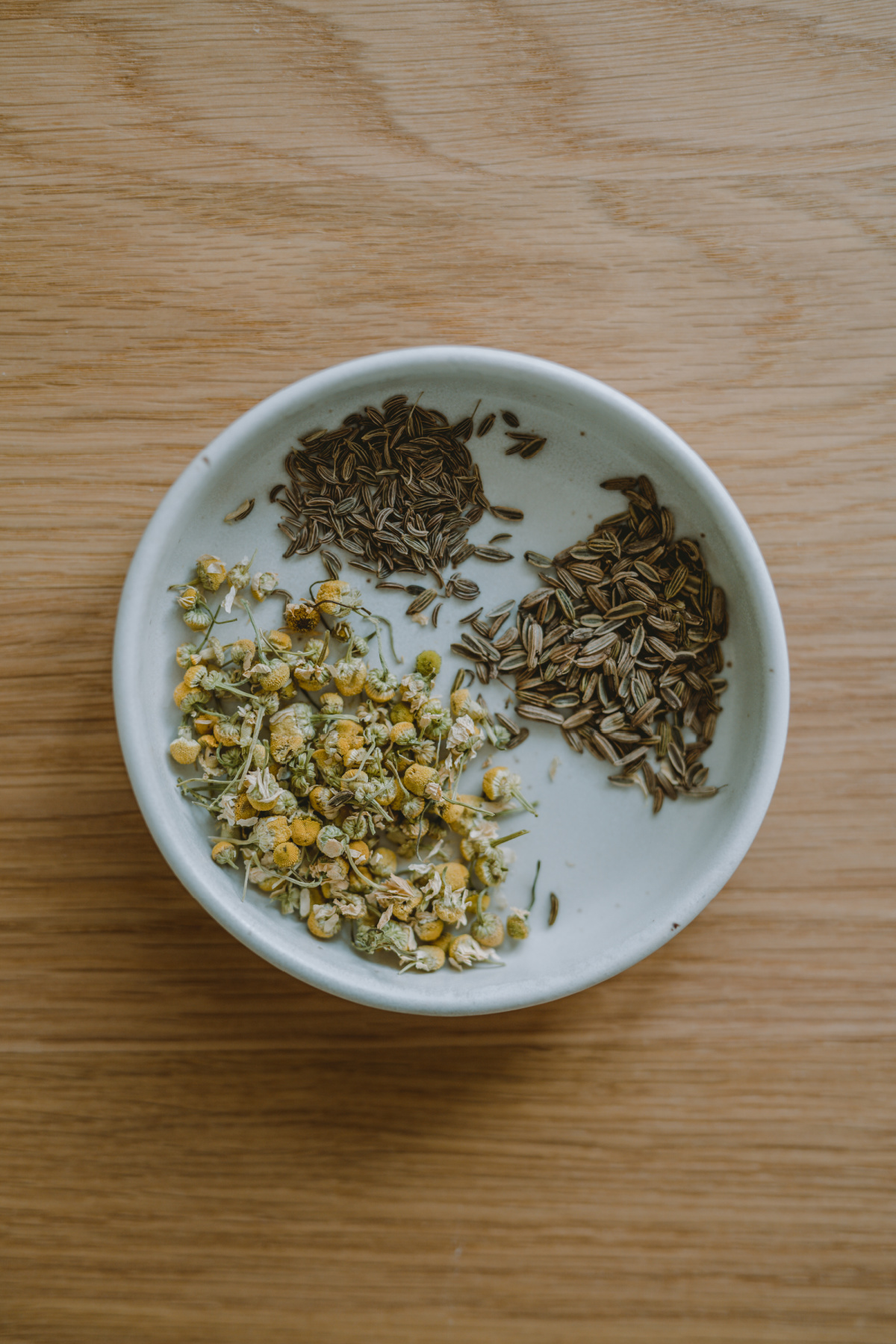 All the following herbs have similar actions and together create a wonderful, complementary blend for soothing a sensitive crampy baby belly. After infusing olive oil with these powerful, yet delicate, herbs, their benefits can easily be accessed when applied and massaged onto the belly. 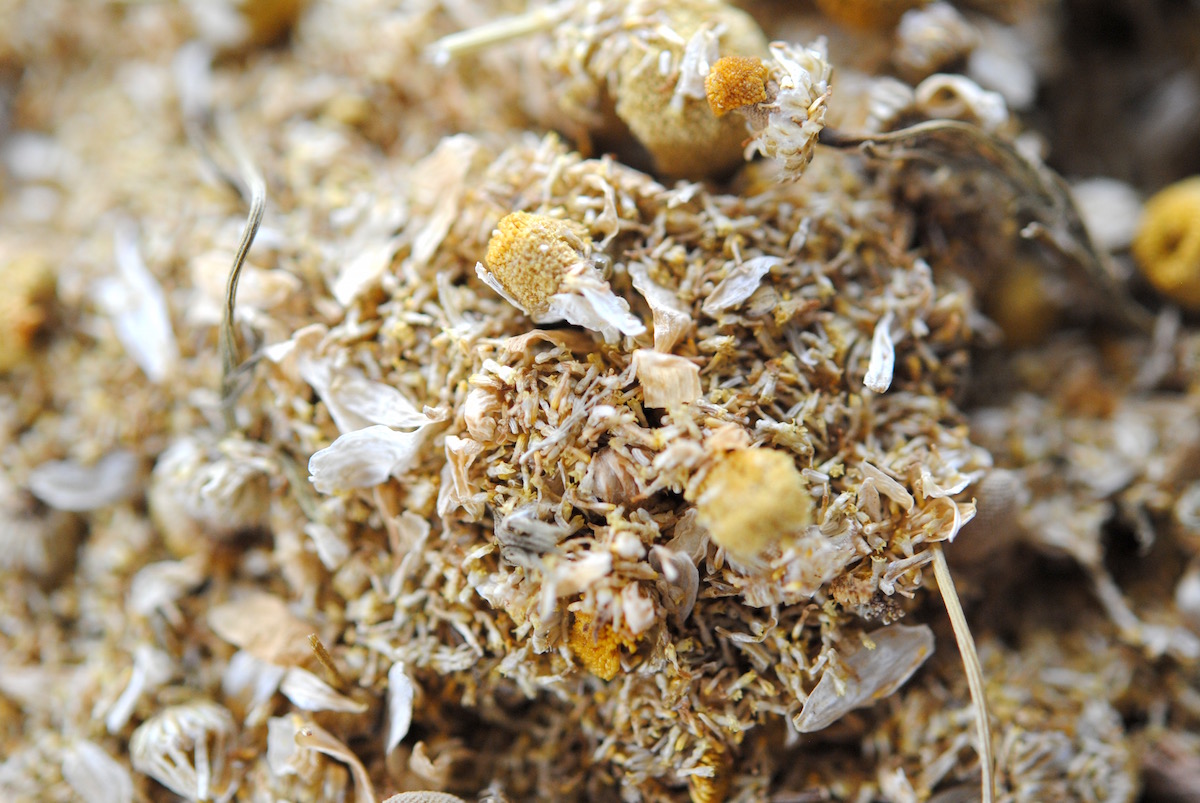 Thanks to its carminative, antispasmodic, anti-inflammatory, and nervine actions, chamomile is a wonderful ally that has been used topically and internally for digestive problems since at least the 1st century CE (Chevallier, 2000). It is considered an especially useful herb for babies and children, and it is often used in cases of colic (Easley & Horne, 2016; Wood, 2004). A small clinical trial looked into the effect of macerated chamomile oil on colic symptoms in infants. During 14 days, 34 infants received five drops of the oil topically applied to the abdomen three times per day. The results of this randomized trial suggest that topical application of infused chamomile oil can help improve symptoms of infantile colic (Salehipoor et al., 2019). 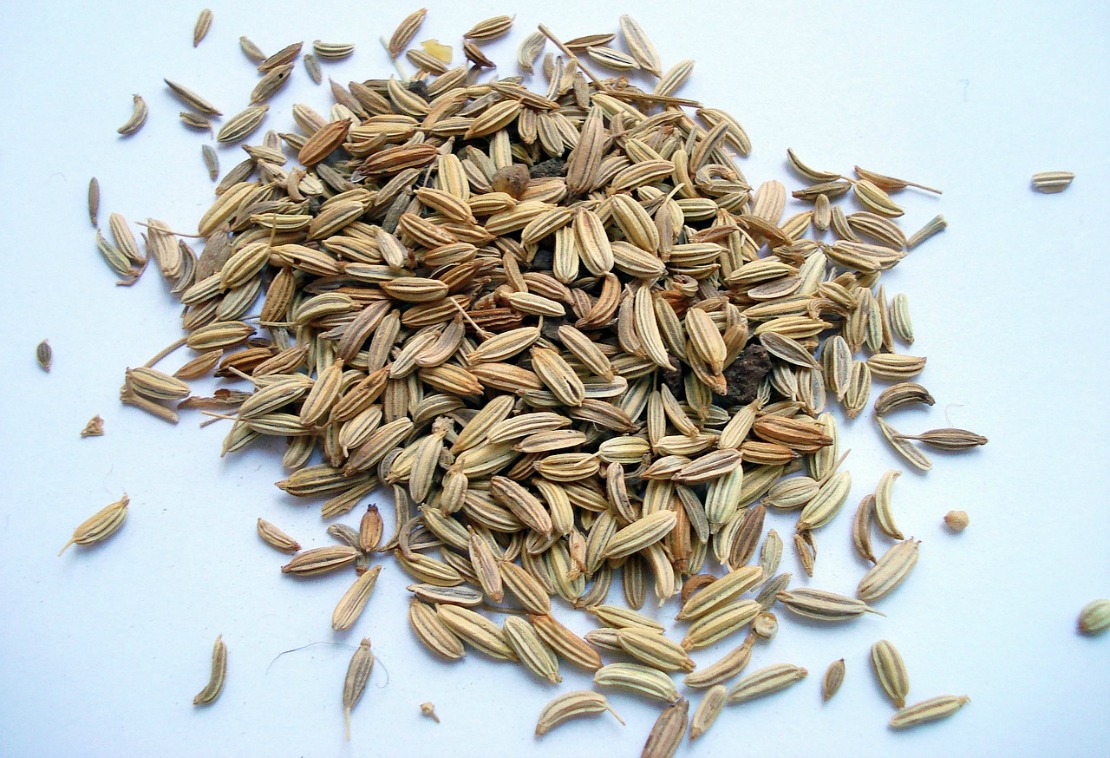 Of all its herbal actions, acting as a digestive aid is what fennel seed is most well known for due to its carminative and antispasmodic properties. These strengths are attributed primarily to the plant’s volatile oils, which are also responsible for its strong aroma. The aromatic volatile oils relax the gastrointestinal tract to reduce muscular pain and discomfort caused by tension in the gut. Traditionally as well as shown in various studies, fennel has also been used effectively for windy colic in infants with flatulence, griping pain, and irritable bowel, (wind colic refers to gas) (Alexandrovich et al., 2003). 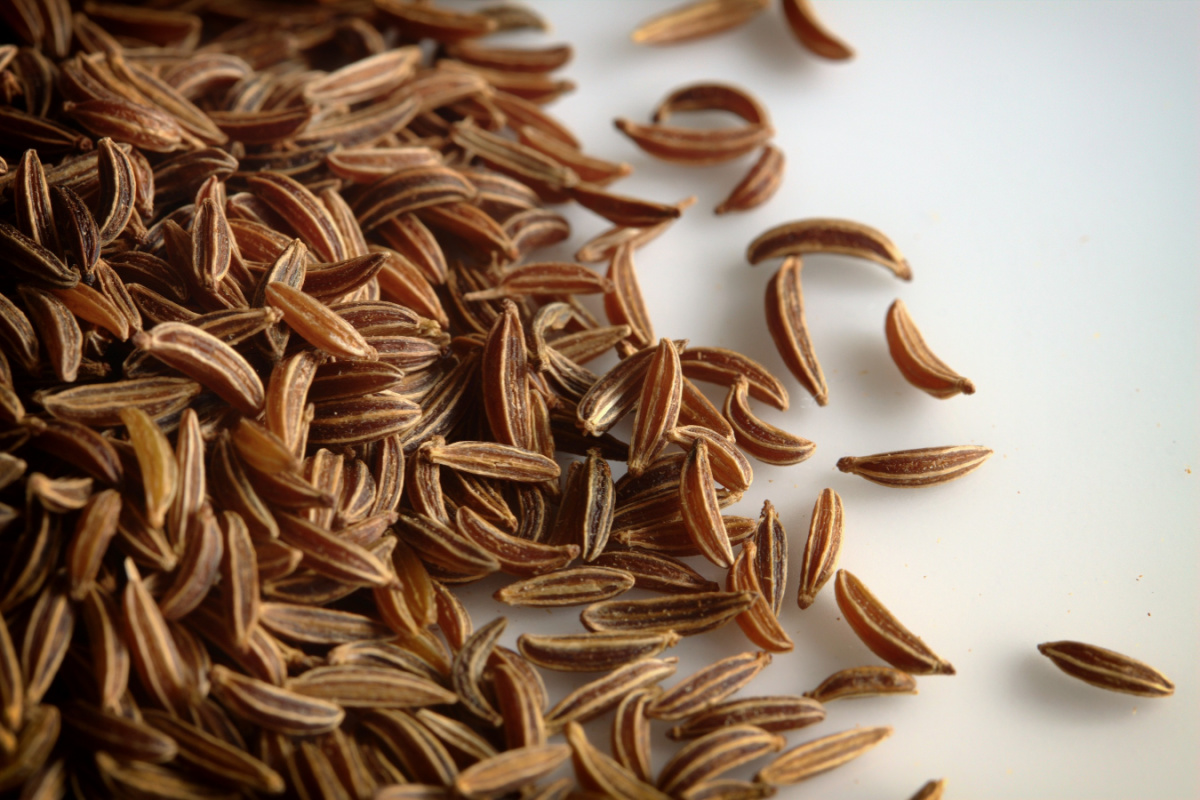 Caraway was indicated by 17th-century English herbalist Nicholas Culpeper for conditions of wind colic. The antispasmodic and carminative properties of caraway make it helpful for stimulating the function of the upper and lower gastrointestinal tract, while simultaneously relaxing spasms (Groves, 2016). In traditional Western herbalism, wind in the body corresponds to tension or constriction, which especially affects digestion (Wood, 2004). The whole caraway plant, or crushed and fried caraway seed, was traditionally put into a hot cloth and applied to the low belly to ease gas pains (Culpeper, 1653/2007). 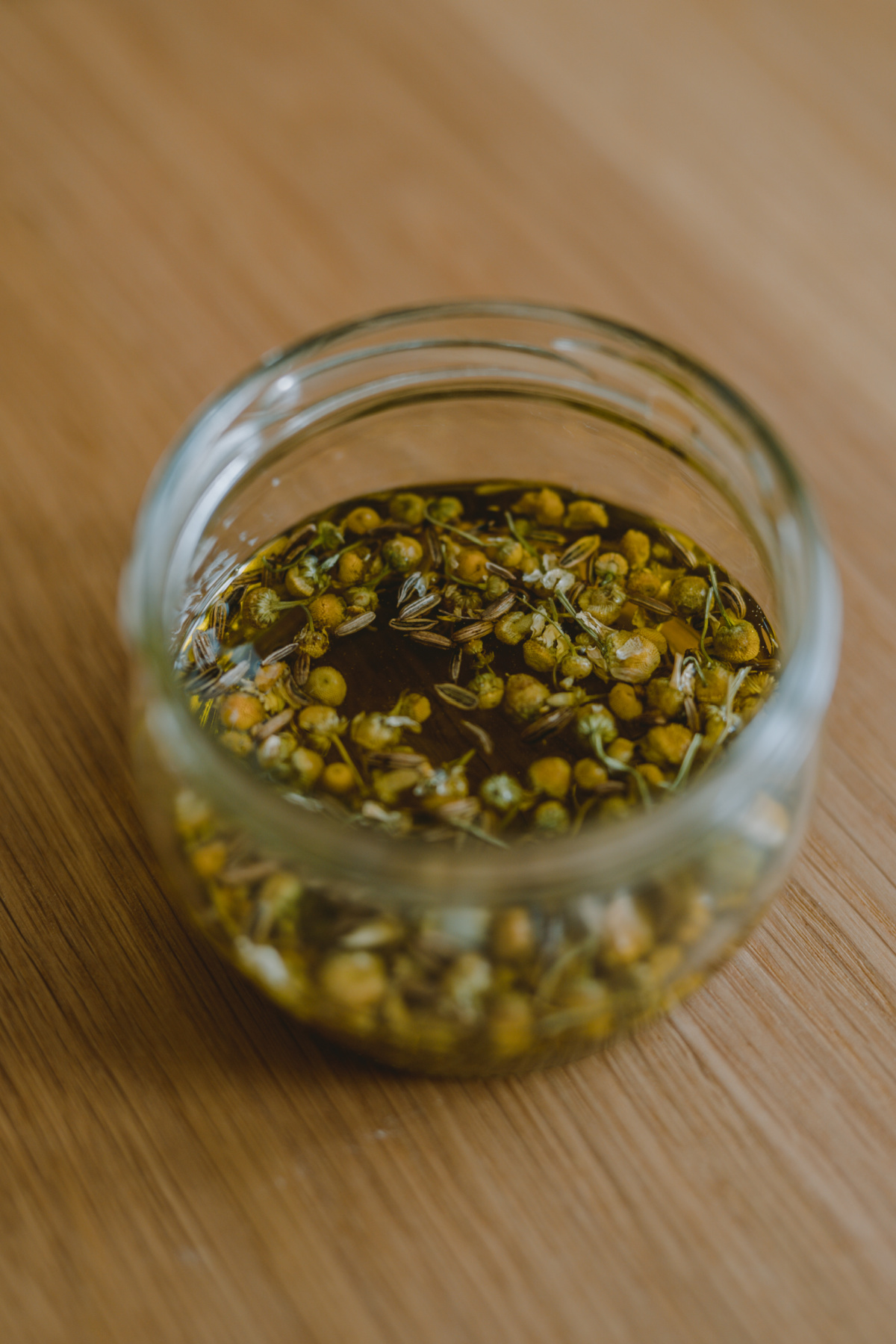 Carminative, antispasmodic, and nervine actions of the herbs in this recipe can help to soothe colic, easing gas and tension from the digestive tract. To be prepared, it’s best to create this oil in advance during pregnancy, as quick support is usually needed when the baby’s belly starts getting crampy.

Infuse the olive oil with the herbs (Option 1 or 2): 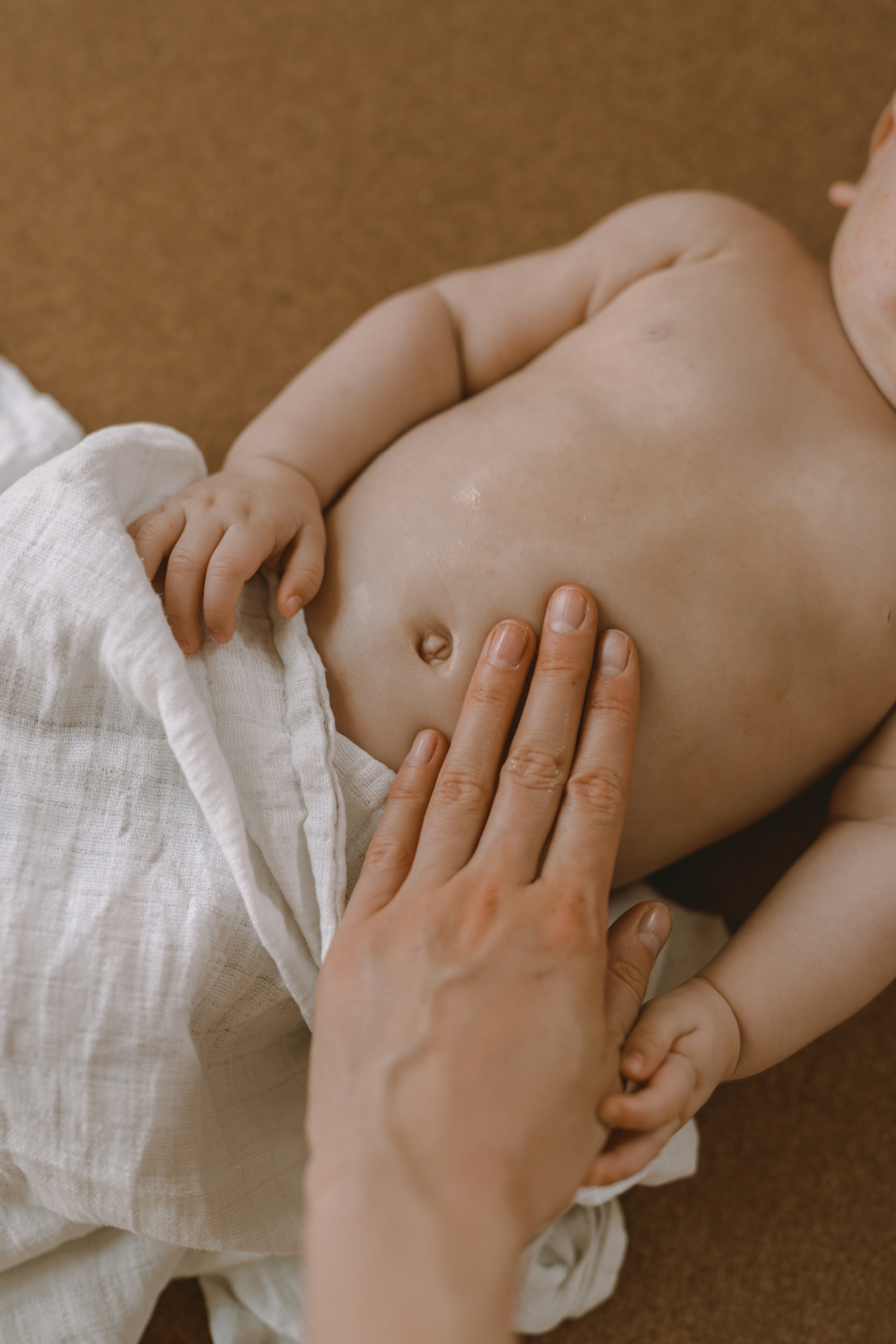 To correctly use the baby oil, it’s helpful to choose a good timing, when the baby is not too irritated, as well as a gentle method. Avoid massaging your baby just before or after a meal. Rather apply the oil preventive, implementing it into the daily routine about two times a day, especially before bedtime.

To begin, place your baby on a soft, warm blanket or towel in the center of the bed or on the floor. Rub a quarter-sized amount of the oil in your hands before touching your baby, to warm both your hands and the oil. Then maintain eye contact and gently place your fingers near your baby’s belly button and start to move in a clockwise motion, spiraling out to the edge of the belly. Progress from one finger gently circling to the whole palm while gently pressing.

The first few months as a new parent are not an easy chapter, especially if the baby is unsettled and struggling with a crampy belly. By trying out some gentle and natural methods such as an herbal oil massage, you may not only reduce the baby’s discomfort, but also build a closer connection to your child. 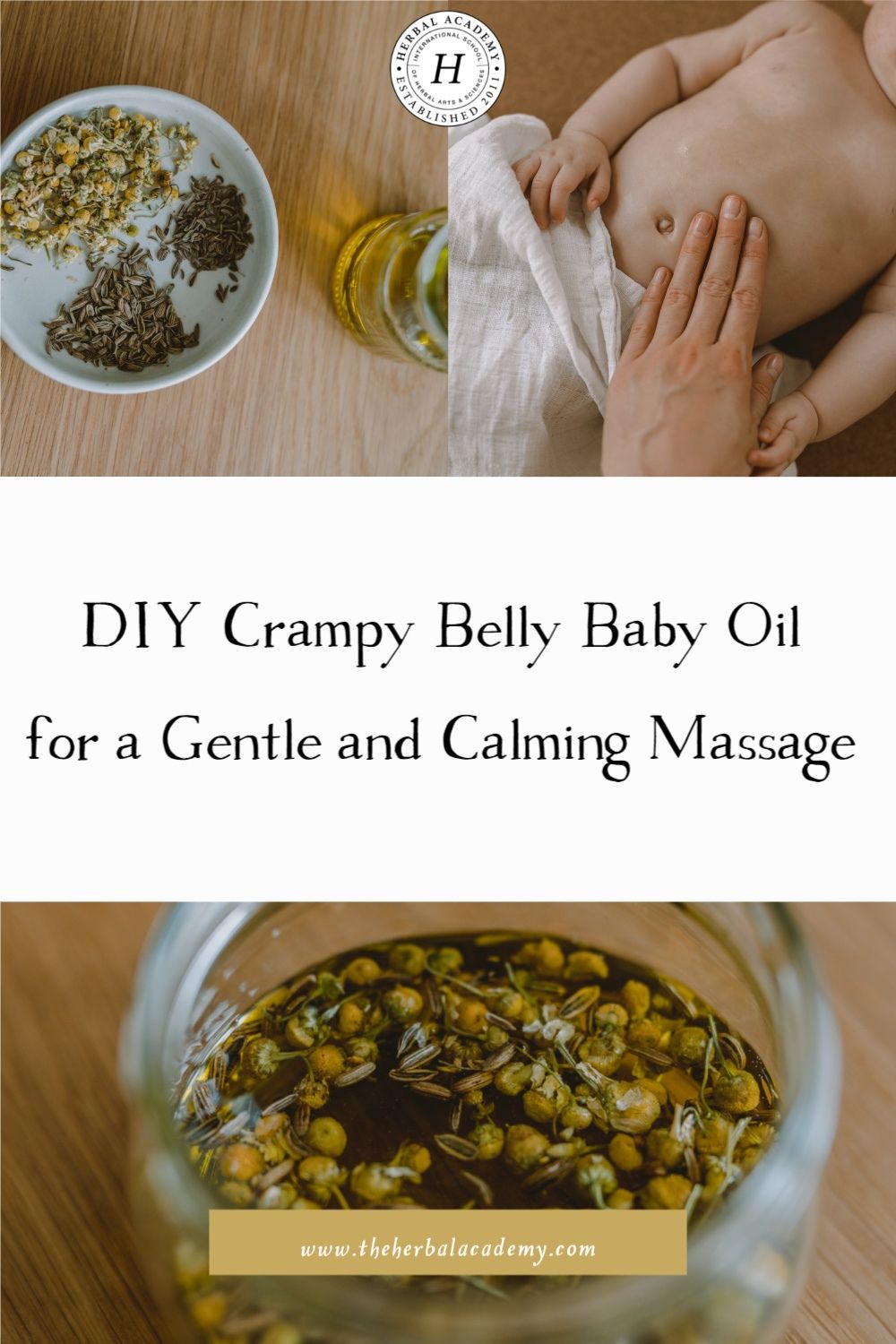 Chevallier, A. (2000). The encyclopedia of herbal medicine. DK Publishing.

Paula Saalfeld runs Plantifultaste, an online community that aims to inspire and reconnect others with their food, body, planet, and personal impact.