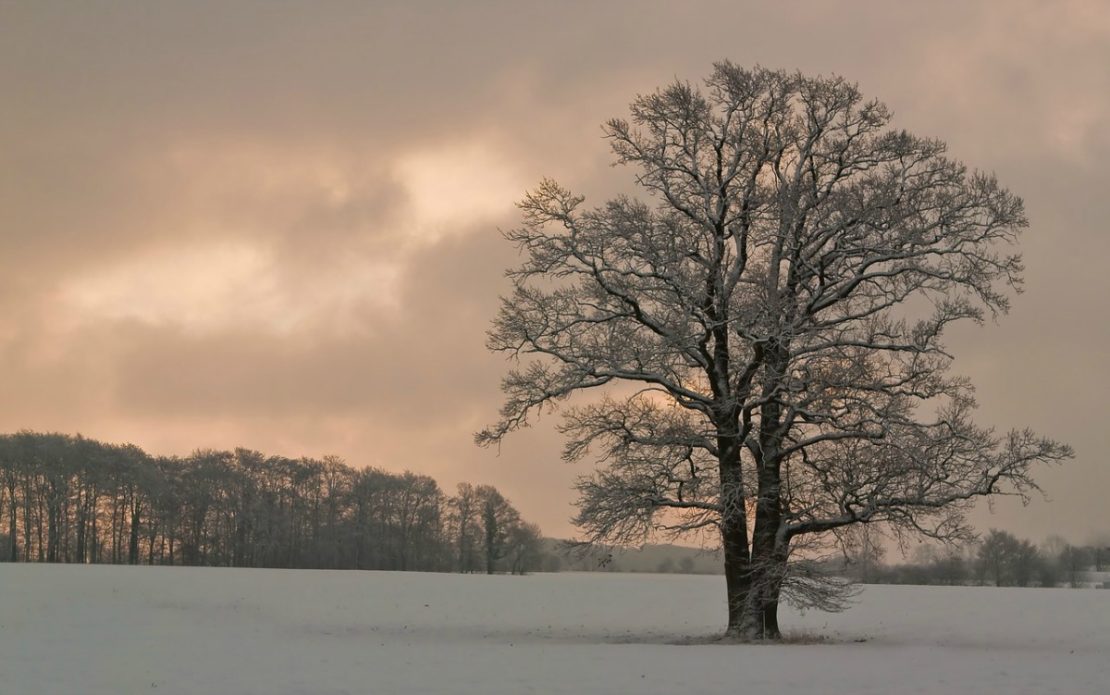 The winter solstice is approaching. This year it will be on Wednesday, 21 December 2016 at 4:44 a.m. central time.

What is the solstice? It is an astronomical event caused by the tilt of the earth on its axis and its orbit around the sun. The result in the Northern Hemisphere is the longest night and the shortest day. In ancient times, the winter solstice marked the midpoint of winter, but in modern times, it represents the first day of winter.

The winter solstice has been the inspiration of many ceremonies since man first realized the significance of the event. As ancient humans noticed the shortening of the days, they perhaps also harbored the fear that perhaps the sun might not return. They, therefore, observed the day in various ways to entice it back.

How The Ancients Celebrated The Winter Solstice

To honor the Oak King, some of our ancestors would include acorn muffins, cakes, or breads in the evening feasts. (The process of making acorn flour is long, but rewarding.) 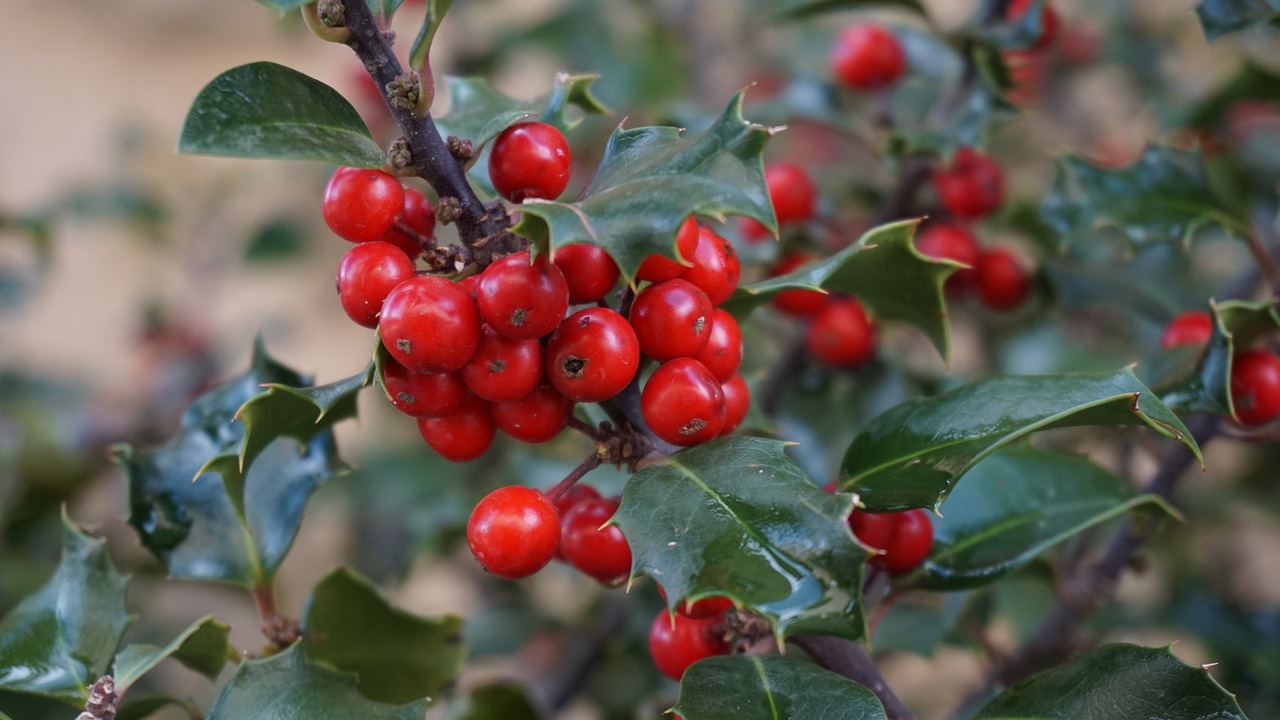 Holly was the sacred plant of the Romans and their god Saturn. Holly was celebrated in by the week long Roman holiday of Saturnalia (which ended on December 23). The Romans made small wreaths of holly and exchanged them as tokens of friendship.

Evergreen boughs (and trees), symbolizing the rebirth of nature and vegetation, were brought into the home; it was felt they had some special gift that they could remain green during the cold winter months.

Pine needles (check for edible varieties in your area) can be dried, and then crushed and added to teas, honeys, and breads for the evening, and the season.

Many traditions included a bonfire as an offering of light and fire and an appeal to the sun to warm the earth once again. Some traditions lead to contemplation of the past year, and throwing something into the fire that symbolized a habit one wanted to rid themselves of. (A modern version would be throwing in a cookie and asking to lose a few pounds!) One might throw something into the fire they would like to improve on during the upcoming year. (Now, perhaps you could throw in a single seed of plants you would like to grow or see flourish in 2017.)

What we refer to now as the Yule log was traditionally a log made preferably of oak (for the Oak King), but ash, pine or birch were also acceptable. They were decorated with evergreen boughs, berries, or seeds. During the evening, the Yule log was burned. Believing the ashes were mystical, people spread them on fields, in the hopes of encouraging magical fertilization in the spring. A small piece of the log was always saved and used to start the fire the following year.

It was the French who made the delightful confectionery version of the Yule log we know and cherish today!

My herb group made Yule logs for decorating a local historical re-enactment park last year and could only use what was in this area 300 years ago. It was an educationally enlightening and fun day. It is interesting to see all the plants we take for granted are actually naturalized from the colonists hundreds of year ago. 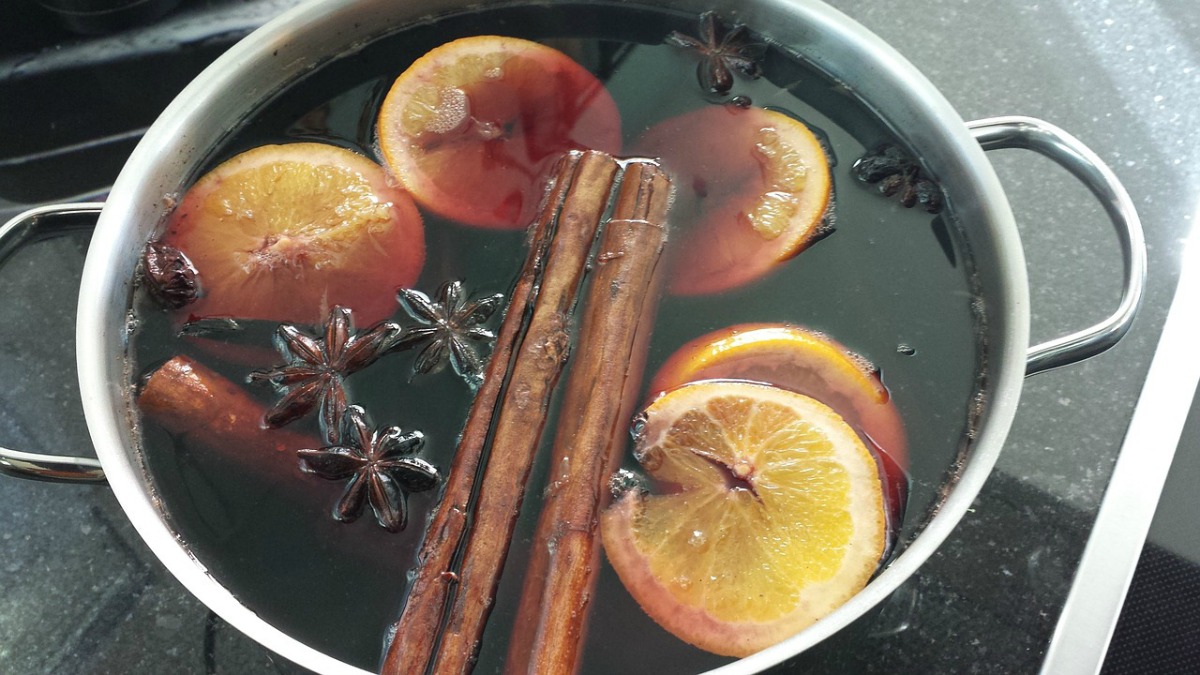 Many people believe that our current December holidays were based on the existing solstice celebrations. It was far easier to convert people and substitute holidays for those that were used at the same time (a late December event).

Since then, solstice symbols have been incorporated into our current day holidays.

Kissing under the mistletoe is based on an old Norse legend. Frigga, the Nordic goddess of love and beauty had a son, Balder, whom she loved dearly. He was a wonderful young god and one the best loved among the other gods. One day, Balder dreamed of dying. His mother was so alarmed, she went to all the birds of the sky and to the plants and animals of the earth and easily extracted from each a promise that they would never harm Balder.

Due to these promises, it was well known that Balder could not be hurt in any way. It became great entertainment at the gatherings of the gods to throw things at Balder, knowing full well he could not be injured.

Loki the Trickster was jealous of Balder’s popularity. He pondered on the promises obtained by Frigga and found the loophole of the mistletoe. Since it did not set roots in the ground and was not of the sky, he gathered some of the parasitic mistletoe, and made a dart of its wood. At the next gathering Balder guided the hand of Hoeder (Balder’s blind brother) in a common game. But, the dart of the mistletoe wood from whom a promise had not been given, found its place, and Balder was killed.

Frigga cried so hard it is said she turned the red berries of the mistletoe to white.  Finally the gods took pity on her and restored Balder to life. The elated Frigga decreed to all that whomever walked beneath the mistletoe should not fight but put down their arms and walk away and a kiss should be given to those who walk under it. Mistletoe etiquette is that for each kiss, a berry was picked. When the berries were gone, so were the kisses. If a maiden refused a kiss, she would remain unmarried for the following year.

Ginger was another precious herb unknown to Europeans until it was brought back by the returning crusaders in the early 1100’s. It was an instant hit in Europe! It became a solstice or holiday favorite and was used in teas, gingerbread and as a flavoring for their favorite meals.

On this side of the ocean, some Native American nations felt the longest night should be used for dreaming, and would sip on infusions made of sleep inducing plants. Upon awakening, they found the days getting longer, and stories were exchanged about their dreams and what they could mean to their futures.

Feasts were a common at solstice bonfires. Common foods included:

1. Pork (reminiscent of wild boar hunts common in northern Europe) or other meats. At this time of year, many farmers culled their herds to avoid having to feed them over winter, and their wives harvested and dried all the herbs they could.

2. Fruit Soup was another winter tradition for some groups. Here is a basic recipe that I found to be very forgiving, so add whatever you have in the house:

3. Grains, nuts, berries or other foods of the late harvests.

4. Ginger in the form of gingerbread, cookies or cakes. Other “new” spices to Europe included cinnamon and cloves (among many others) and were also used, when available.

5. In some Celtic cultures, shortbread was served made in round forms representing the sun. The easiest and best recipe I’ve found is one that came over from Sweden with my relatives a couple hundred years ago:

6. Finally, no solstice celebration could be without some sort of mulled drink or a wassail (which means “health”). Some of these were made in an alcoholic base— wines, beer, ale, or mead.

Spices typically used included cinnamon, allspice, cloves, and ginger. If oranges or lemons were available (a sign of wealth) the peels were used. Some people liked the flavor of anise and a star anise could also be added. These were simply mulled or simmered in the beverage.

Non-alcoholic versions are also available using apple juice, cranberry juice (a North American native but cousin to the European bilberry), and/or orange juice. When I make this, I put everything in a crockpot and mull it. Mulling spice mixes are available for sale pre-mixed at various places and make it easy! Just add to your beverage. A side benefit is the wonderful way it makes the house smell! 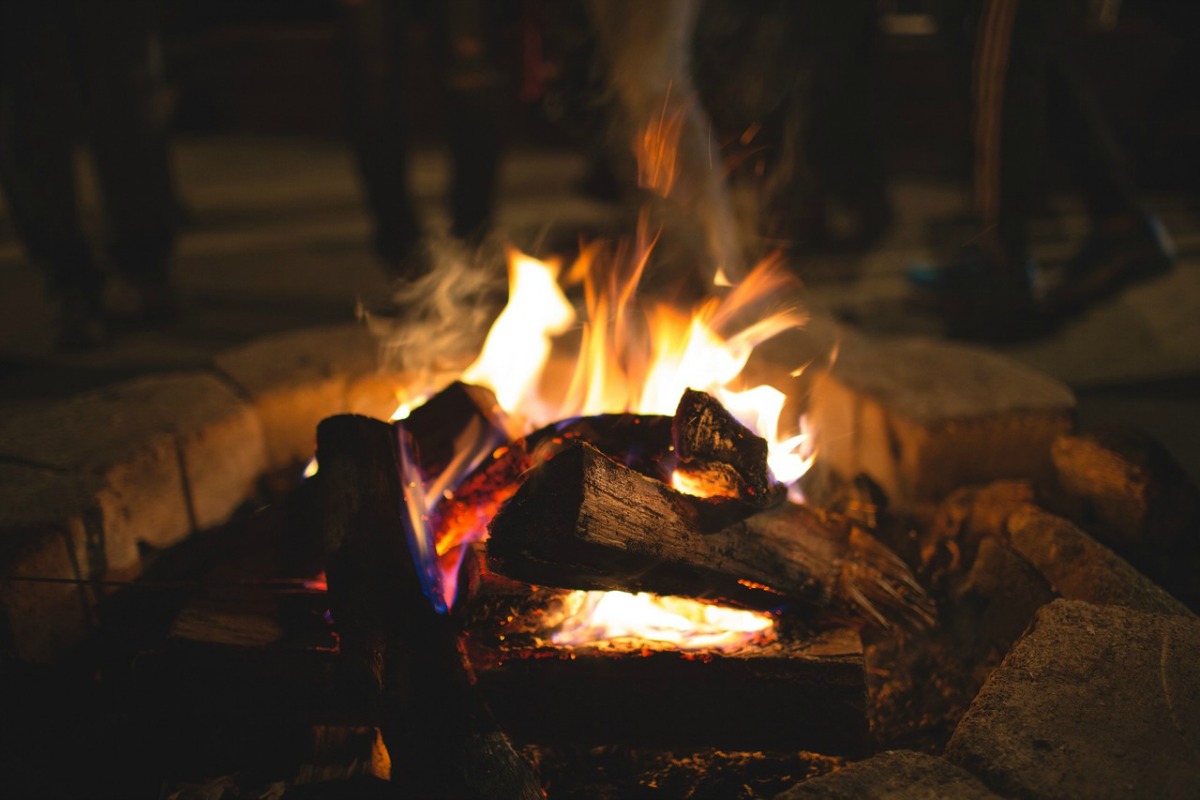 How I Celebrate The Winter Solstice

We have a bonfire each year. I have a bag of plant material I save that is no longer useful for culinary or medicine purposes for people to throw a handful into the fire. It’s like an “open fire” for the evening for anyone to sit around the fire and come and go as they want. Mulled cider and some of the above foods are available either at the fire or in the Learning Center (if it’s very cold or wet).

I’ve found contemplation of the past year, and plans for the future are easier while gazing into the fire at this quiet, still time of year! Much like our ancestors, one can get lost in the soft crackle in the darkness. 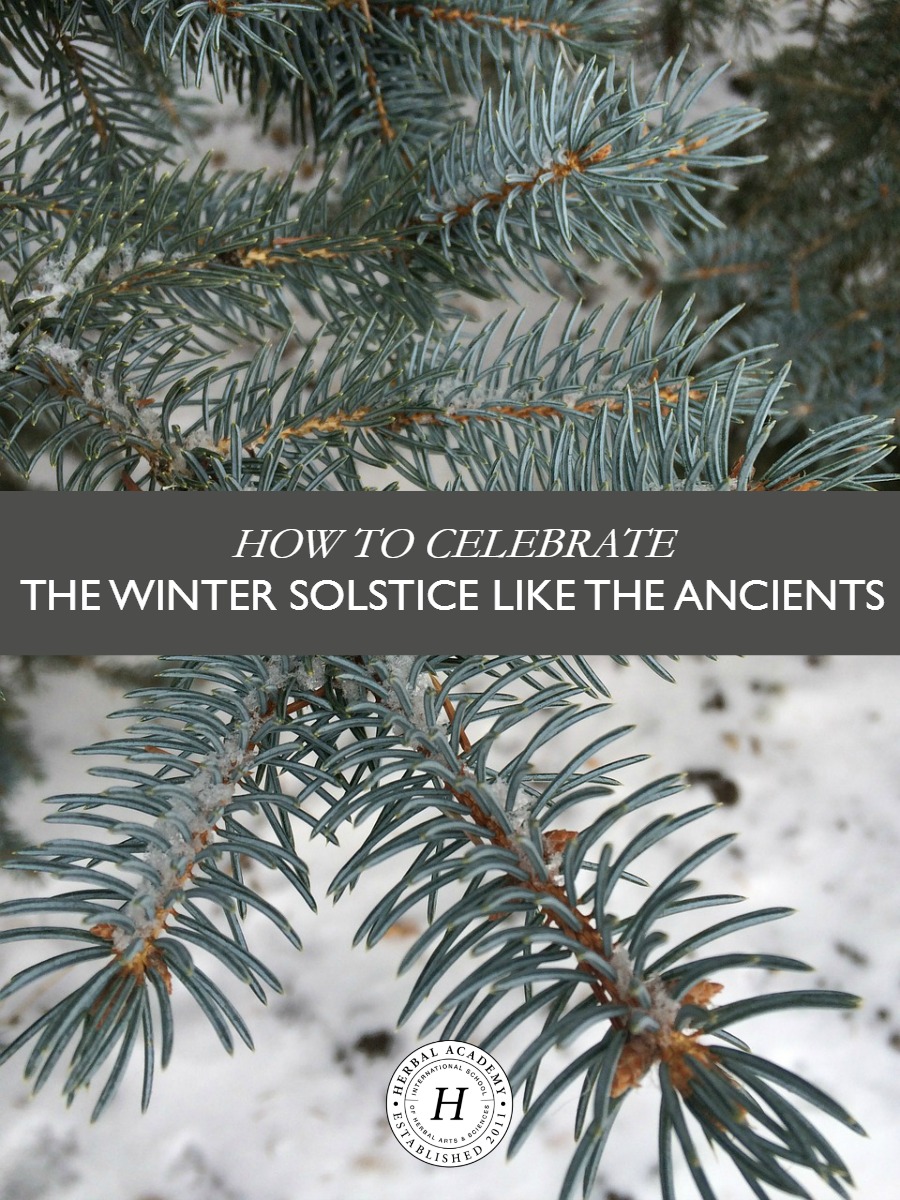