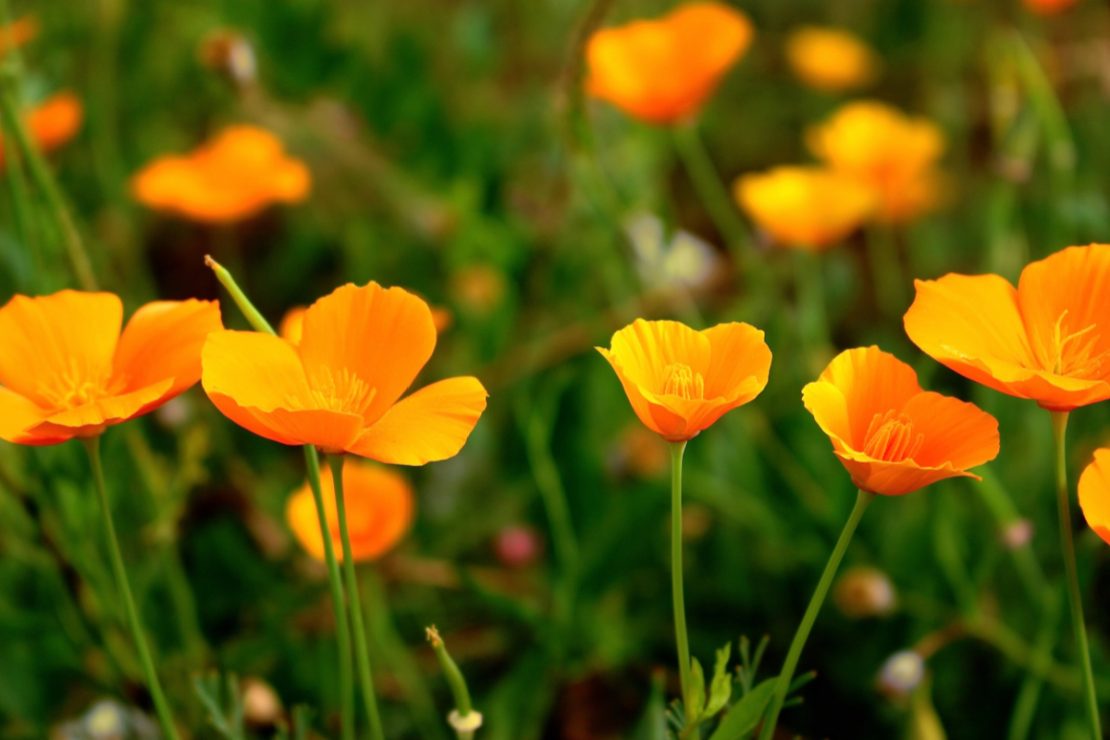 California poppy (Eschscholzia californica), the state flower of California, is a beautiful wildflower that has been an ally to western-dwelling Indigenous peoples for long before there was a United States, let alone a United States Pharmacopeia. In this post, I will share with you a materia medica on the beneficial California poppy benefits, which should help familiarize you with this lovely ally, its actions, and potential applications. This information should not be used to diagnose or treat disease, but to form an appreciation and familiarity with this much-loved plant ally and its uses. 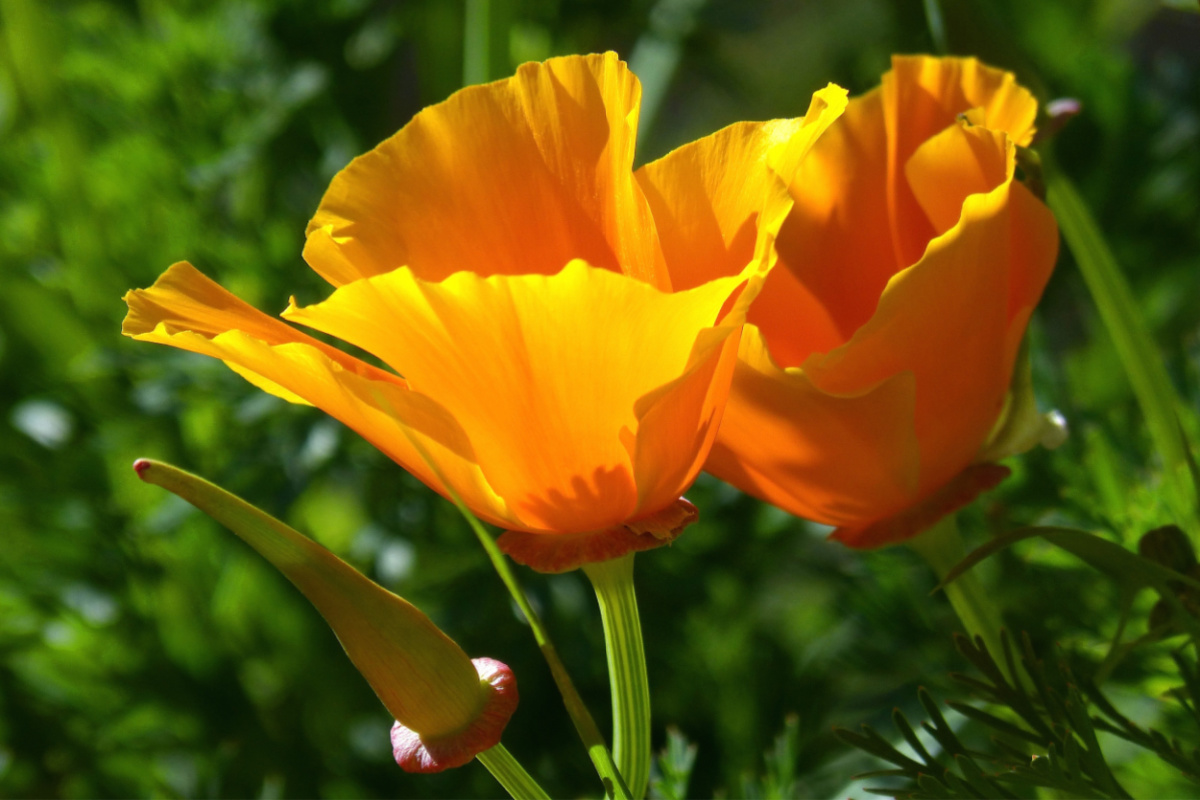 California poppy (Eschscholzia californica) is an annual plant in the Papaveraceae family. The Papaveraceae family hosts both herbal and ornamental members. You may be familiar with the ornamental Flander poppy (Papaver rhoeas) which is red in color—much like the infamous opium poppy (Papaver somniferum). Unlike these relatives, California poppy blooms in a beautiful glowing golden yellow/orange hue.

This poppy also presents much differently than its Papaver genus relatives, as the buds of the flower are contained in small cones before the flowers bloom. This gives the petals a smooth and silky appearance once the flowers open. Unlike its Papaver relatives, the flower buds do not droop, or nod, during the flowering. These cones stay upright through all stages of inflorescence.

Eschscholzia in its most vital form grows to be 1-1.5 feet tall, with an equal spread. The long orange taproot anchors a tuft of gray-green foliage to the earth. The stems are long, and leaves feathery. Nyctinastic flowers bloom at the end of long stems, and the seed capsules mature into tall cones that eventually split to disperse mature seed if not hand-collected (Missouri Botanical Garden, n.d.). Nyctinastic means that the flowers move or open and close in response to light and dark. 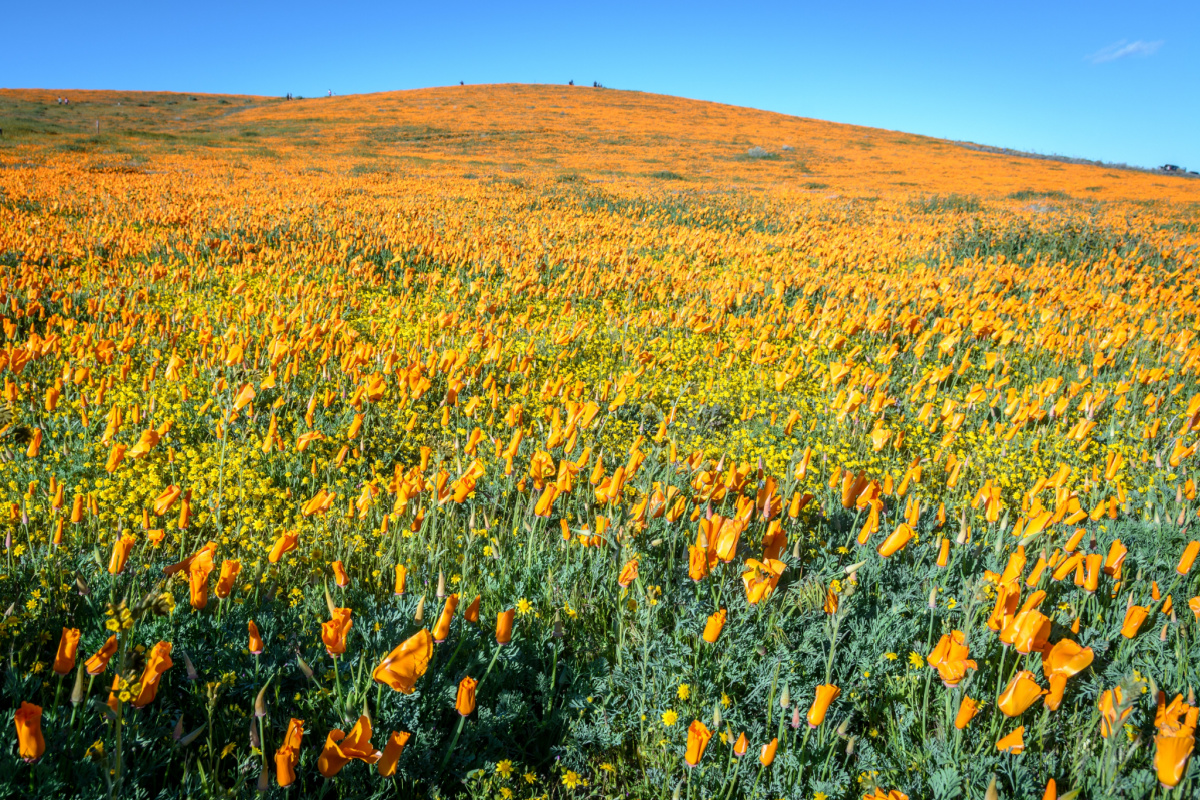 Native to Southern Washington down through Southern California, and west to Nevada, New Mexico, and northwestern Mexico, this wildflower can be found blooming on sunny slopes, fields, and roadsides from June to July. Their blooming draws photographers to the Western United States every year, as the bright yellow/orange blooms set the earth on fire (Missouri Botanical Garden, n.d.).

You can grow the California poppy in your own garden if you live in the United States hardiness zones 6-10 (to find out what hardiness zone you live in click here). It doesn’t require much in the way of maintenance or a watering schedule, although picking the flowers often for use, will encourage a longer blooming. California poppy can tolerate dry spells and sandy, rocky soils—just like it would in its native range—but can also grow in richer soils provided it is not too wet. Where it is less hot and dry than its native range the plants may bloom all summer and into the fall.

This is definitely one to plant in full sun, and California poppy intermingles nicely with other plants as the clumps do not spread or threaten neighbors with exploratory roots or over-shading foliage. As a volunteer plant (one that self-sows) the population will spread year after year if left unchecked.

As annuals or short-lived perennials, it is best to start California poppy from seed. Seeds can be started indoors, or sown directly into the ground. If starting seeds indoors, begin with a one-week cold stratification in early spring and transplant outdoors in late spring. If direct sowing, sow in late spring when the ground is workable (Hartung, 2011). 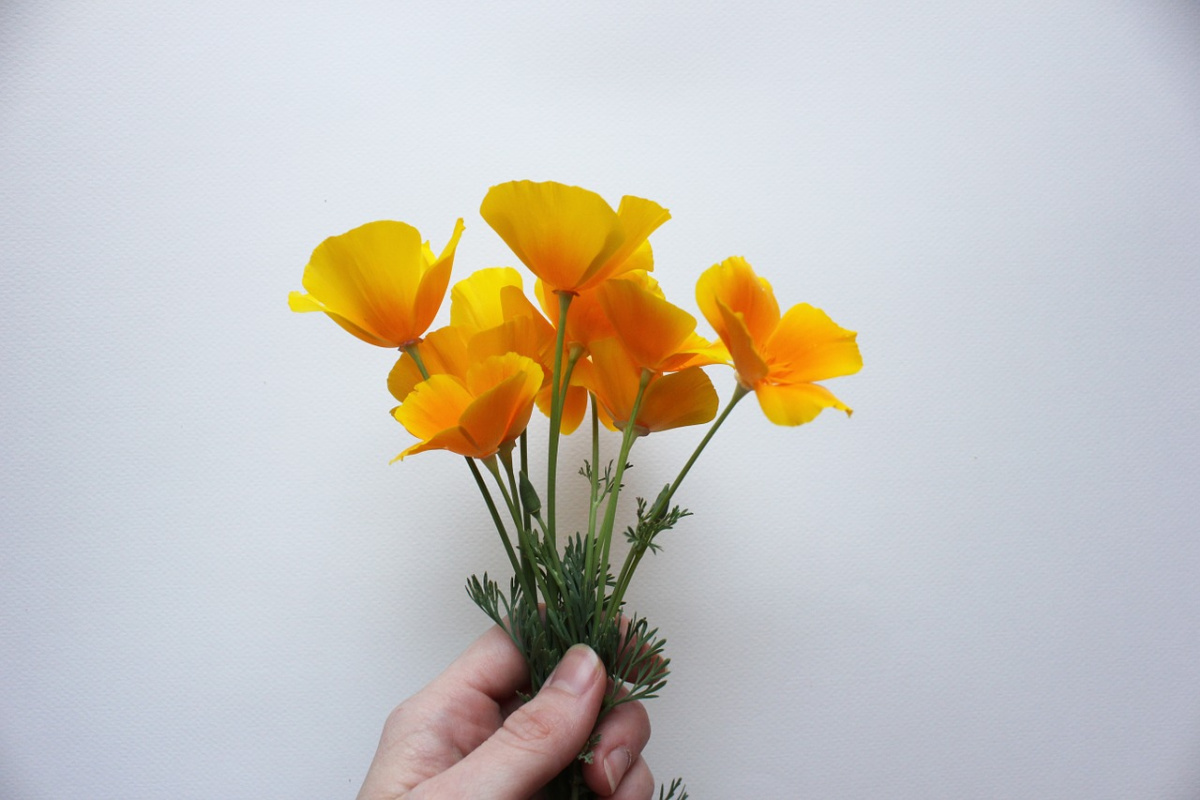 In addition, the Yuki peoples of Mendocino County, have a diverse display of traditional uses for the California poppy. A juice of the roots is multi-functional as it could be used externally as a wash for headaches, festering wounds, or to stop the secretion of milk in lactating mothers. Internally, the juiced root has traditional use for stomach ache, consumption, and as an emetic. The root’s traditional usage in easing toothaches demonstrates that its pain-soothing properties are well known (United States Department of Agriculture Division of Botany, 1902).

The Luisñeo Native American people, of the Temecula Valley, traditionally use California poppy as food. The leaves can be used as greens, and the flowers can be chewed with chewing gum (Pechanga Band of Luiseño Indians, n.d.; Sparkman, 1908). 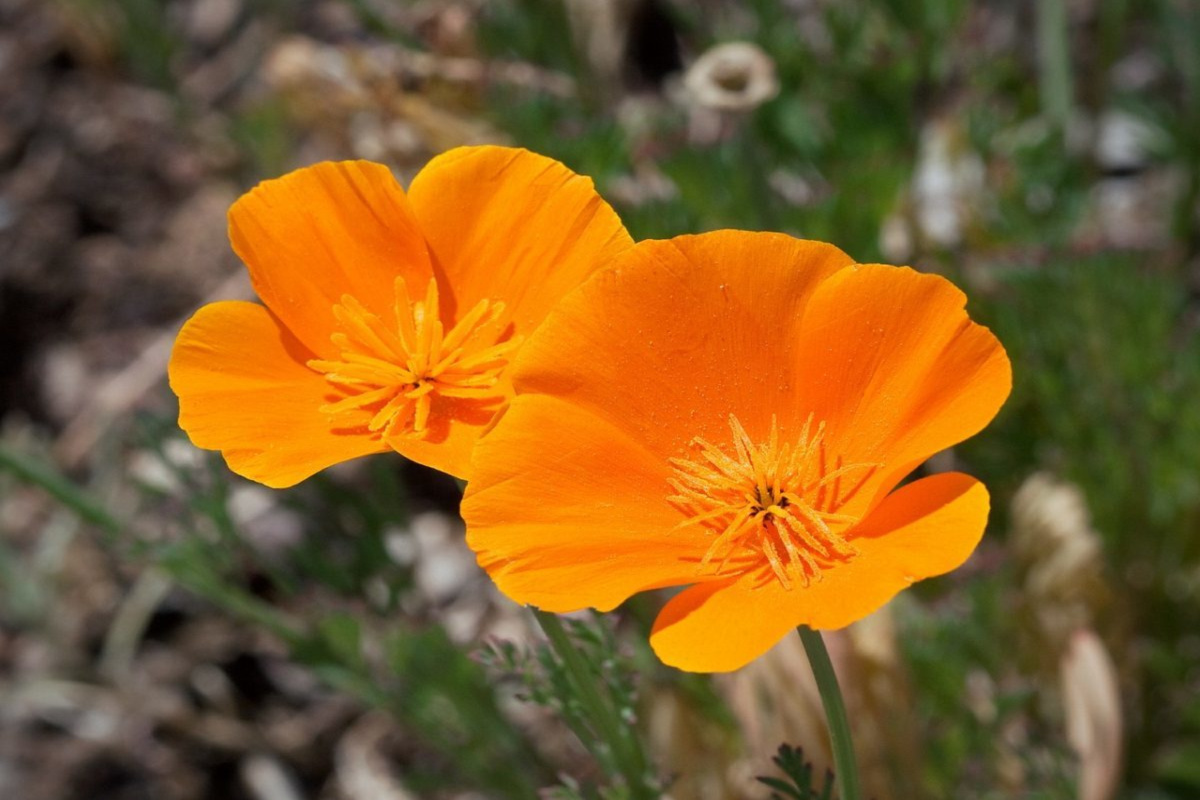 California poppy is very useful for soothing nervous tension, anxiety, difficulty sleeping, and even bedwetting due to the plant’s ability to help normalize psychological function (Chevallier, 2000). Gentle enough to use on children, this poppy does not produce a narcotic effect. Use California poppy anytime that an antispasmodic is needed, like in cases of colic (Hoffmann, 2003). California poppy may also be deeply beneficial for those that suffer from pain, as it can ease pain, and is non-addictive (Chevallier, 2000).

Not to be used during pregnancy

California poppy does not produce a narcotic effect in the body, but does have the potential to exacerbate the effects of narcotic drugs. This herb is considered safe to use with children (Hoffmann, 2003).

The flower essence of California poppy is said to help find one’s own sense of spirituality, and develop an inner center of knowing (Kaminski & Katz, 1994).

Although many herbalists argue that the plant’s whole, synergistic constituent profile is responsible for its actions within our bodies, modern science is working to distinguish individual constituents with which to accredit these actions.

While understanding individual constituents may not be getting us any closer to understanding the mystery and wonder of a wellness partnership with plant allies, it can certainly point us in the right direction when it comes to the methods we use in herbal preparation.

Some of the constituents in California poppy are alkaloids and flavone glycosides. While alcohol extraction is quite common in commerce, for the home apothecary, the plant constituency lends itself well to vinegar extraction.

Vinegar is solvent and preservative in one, making it a useful menstruum to keep in the home apothecary. Vinegar makes an especially good menstruum for plant allies which contain alkaloids. Raw free-base alkaloids are difficult to extract in other solutions. The acetic acid in vinegar bonds to raw free-base alkaloids in the maceration process. This forms an alkaloidal salt, which readily dissolves into water (Green, 2002). This process also makes best use of California poppy’s benefits. 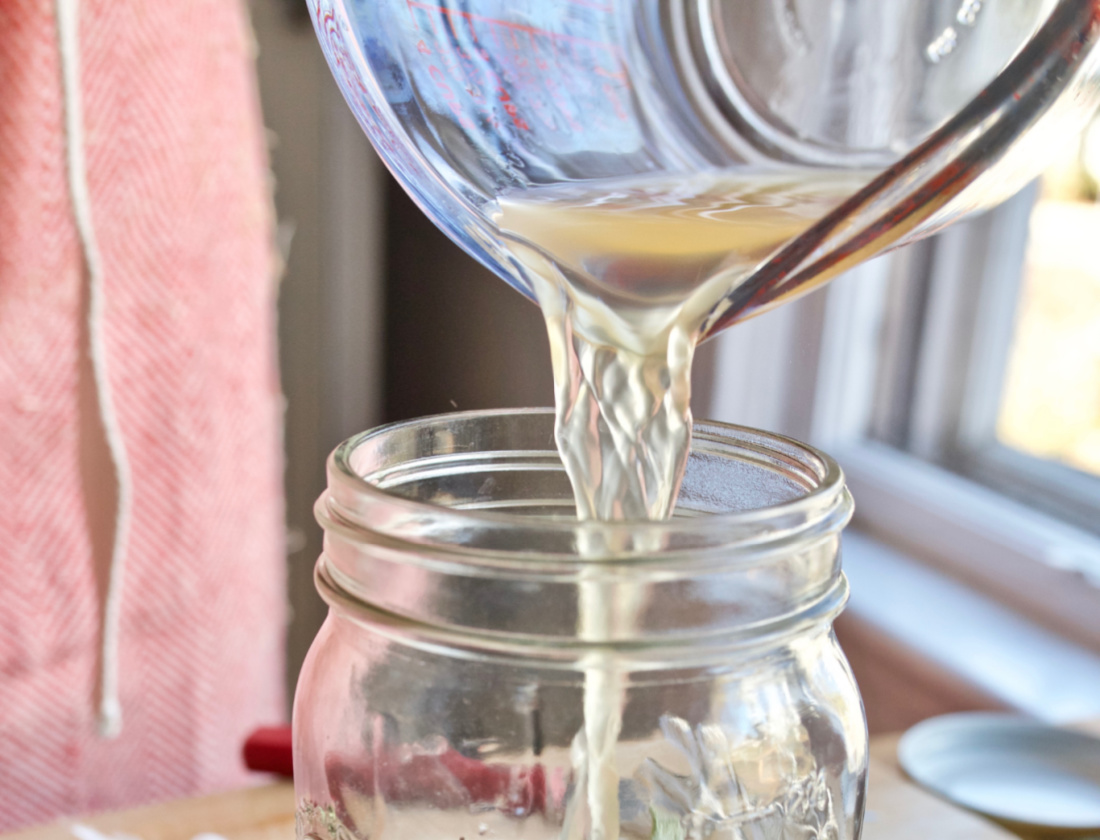 While alcohol extraction is quite common in herbal preparation, the alkaloids of this plant lends itself well to a vinegar extraction.
Ingredients

Label your final storage vessel; mason jars work well. Include the name of the preparation on the label. Labeling can be fun or straightforward. You will likely want to list the ingredient, include details of fresh or dry, and what parts of the plant were used. Give the ratio of marc to menstruum used in the preparation, and the date you filtered and bottled.

California poppy is a small but mighty plant, with a cheery disposition. One of the California poppy benefits is that it supports the deep need for settling and calming without the consequence of numbed dullness. This herbalist hopes that after reading this introduction to the stunning California poppy and its many benefits, the reader can confidently build a relationship with this plant ally, and invite its nourishing and settling effects into your home apothecary. 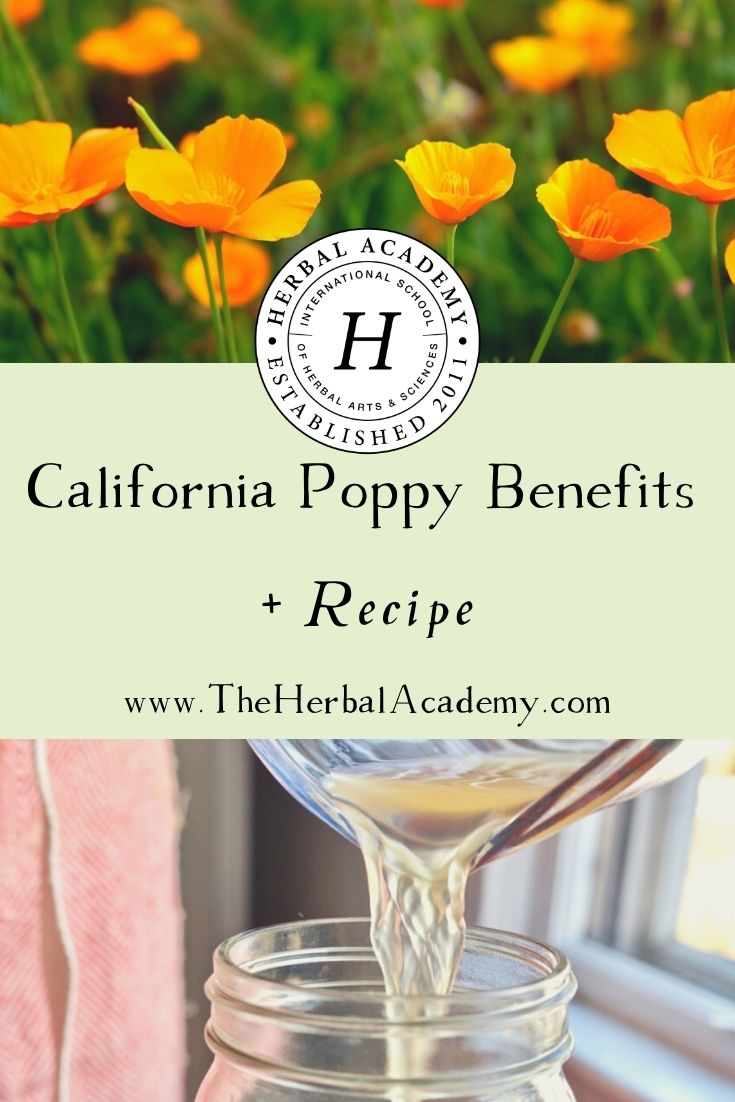 United States Department of Agriculture Division of Botany. (1902). Plants used by the Indians of Mendocino County. Contributions from the National Herbarium. 7, 295-408. Retrieved from https://www.biodiversitylibrary.org/item/13767#page/1/mode/1up

Sparkman, P. S. (1908). The culture of the Luiseno Indians. University of California Publications in American  Archeology and Ethnography, 8(4), 187-234. Retrieved from https://archive.org/details/universityofcal08univuoft/page/n7/mode/2up

Kira is passionate about empowering and educating. As a community educator and Herbal Academy blog contributor she enjoys getting to share what she's learned along her own wellness journey. In her free time, Kira enjoys spending time in wild and cultivated plant spaces or reading with her rescue dog Iggy. You can connect with Kira on Instagram @theherbaceousbabe or on her website www.herbaceousholistics.com.