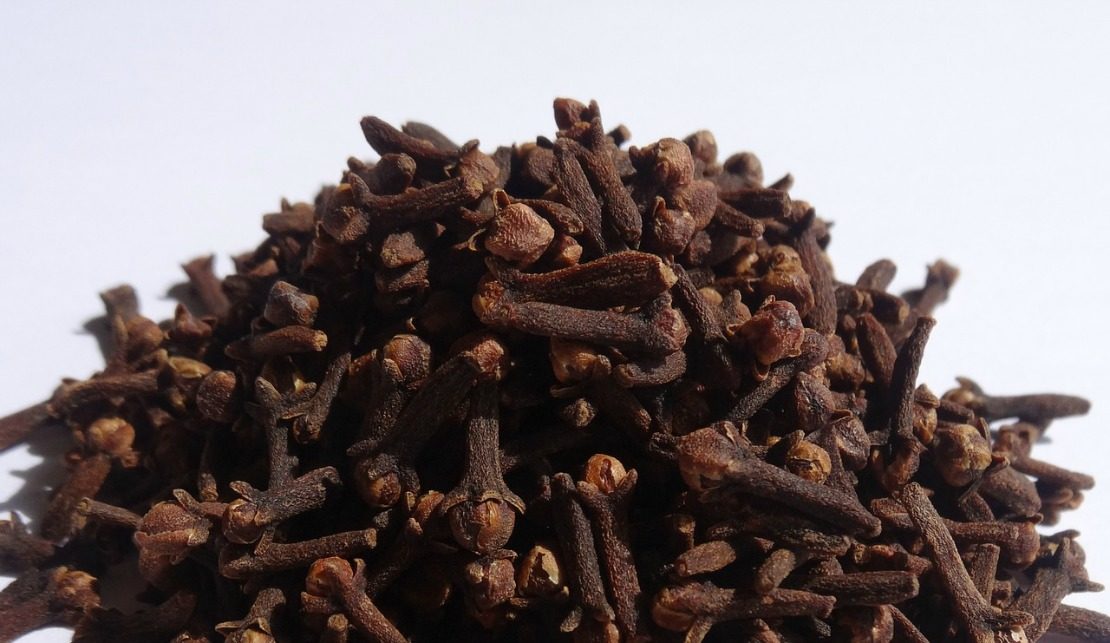 We all know clove is a staple of wintertime recipes, including desserts like ginger snaps and pumpkin pie. Clove is also used as a warming herbal carminative and as a topical anodyne (painkiller) in many healing traditions including Ayurveda, Traditional Chinese Medicine, and western herbalism. Native to Indonesia, cloves are the unopened flower buds of an evergreen tree in the myrtle family, Syzygium aromaticum.

You might also notice that recipes call for a very small amount of clove. A pumpkin pie recipe, for example, may call for ½ teaspoon of ginger and a whole teaspoon of cinnamon, but only ¼ teaspoon of clove. Clove’s pungency is so powerful it could overwhelm the entire dish.

This pungency gives clove its highly aromatic quality, but it also gives it a particularly heating quality. This may explain its prominence in wintertime recipes like pumpkin pie: the pungency of cloves keeps us warm. But this heating quality also earns it a diverse array of healing uses especially in those with vata and kapha constitutions; on the other hand, those with a pitta constitution may find cloves aggravating. (Lad, 1984)

How to Use Clove

Topical: Add a few drops of clove essential oil into massage cream or oil and gently apply in wide circles around the belly button (moving from lower right side, to the top, to the lower left, to the bottom) to warm the digestive organs.

Digestion: As a warming carminative, clove can be added to soups, pies, and other dishes to kindle the digestive fire.

Colds and flu: To alleviate congestion, a few drops of essential oil can be dropped into hot water and breathed in with the steam. (Lad, 1984) Our Intermediate Course explores the nature of our respiratory health as well as the impact that herbs have on other systems of the body. The essential oil of cloves can be purchased here.

Toothache: As an anodyne, cloves are used in response to toothaches. As such, it has earned its place in a number of toothpastes and related home remedies.

Inflammation: Clove, along with many other herbs, is an anti-inflammatory. In the first study ever conducted to determine bioavailability of antioxidants in common herbs and spices, it was shown that culinary amounts of cloves, ginger, rosemary, and turmeric were able to significantly stifle the inflammatory response. (Percival, 2012) Whole cloves can be ground and pinched into teas, infusions, pies, soups, and other dishes. Clove partners well with sweet spices like cinnamon or fruity herbs like hibiscus.

Aphrodisiac: Perhaps one of the more notable uses for cloves is how stimulating it can be for those who wish to promote their sexual activity (Tirtha, 1998). Herbal pungency is often associated with aphrodisiacal results, which is why other pungent, heating herbs like garlic are used in a similar way. The topical use of cloves as part of a botanical cream has been shown to help men overcome premature ejaculation. (Choi, 2000)

Cloves, as a particularly pungent herb, earns itself a place in many recipes because it heats up digestive fire and therefore helps us to process all of those heavy foods.

But it also—ahem—helps us to stay warm in other ways!

Overusing clove oil in the mouth may damage the gums and/or mucous membranes. Pregnant and breastfeeding women, and people with bleeding disorders should avoid medicinal amounts. Stop using clove two weeks before surgery.