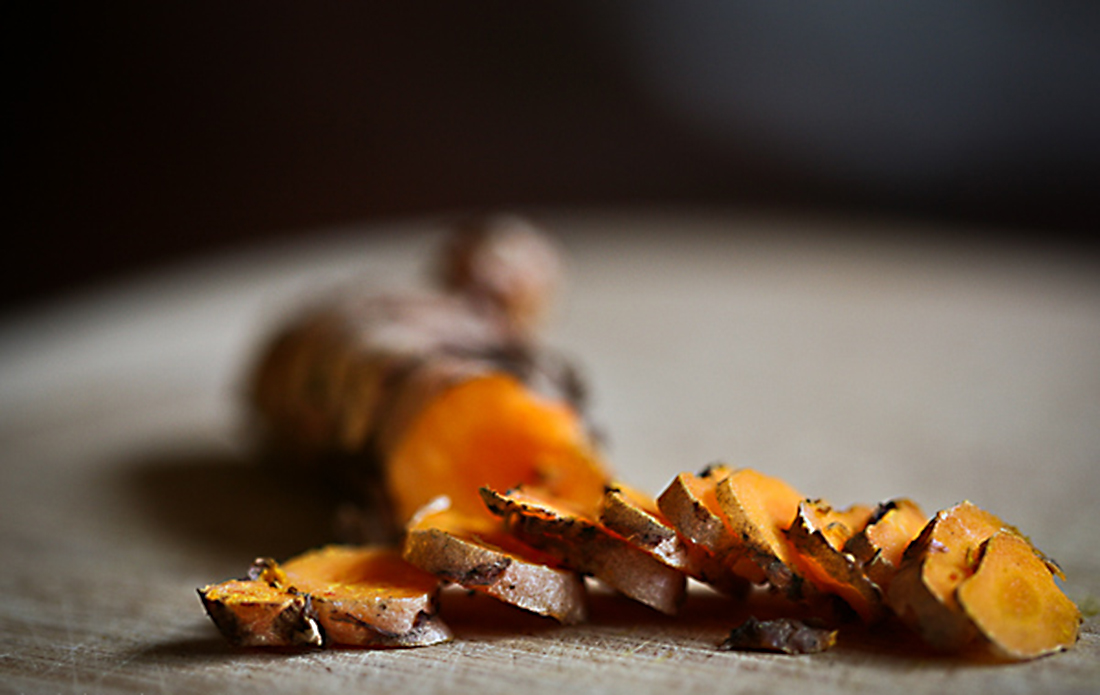 Most of us know turmeric (Curcuma longa) as the vibrant orange powder located in the spice section between thyme and vanilla beans. And many of us use turmeric root powder in our cooking, particularly if we have an affinity for preparing Indian-inspired dishes. Similar to the root-like component of its cousin ginger, turmeric has been a staple of Indian food traditions for millennia and has a long history of healing use (over 4000 years) in Ayurvedic, Traditional Chinese, and Siddhic medicinal traditions.

Turmeric’s role in Hindu devotional and sacred ceremonies is alluded to by one of its Sanskrit names: Kanchani, the “Golden Goddess,” perhaps so called because its beautiful golden hue generously bestows healing to a wide range of ailments (Gallant, n.d.).

The characteristic golden hue is produced by curcumin, the constituent in turmeric most isolated and studied by scientists, but the whole herb is used in herbal traditions and has also been the subject of many favorable studies.

Antimicrobial
Antimicrobial herbs inhibit the growth of pathogens like bacteria, viruses, and fungi. A 2009 study on aqueous extract of turmeric showed good antimicrobial action against such pathogens as Escherichia coli and Staphylococcus aureus (Niamsa et al., 2009).

Cholerectic
Cholerectics stimulate production of bile, thereby supporting digestion. In Ayurveda, turmeric is a warming herb that kindles digestive fire, or agni. Like other bitter-flavored herbs that stimulate bile production, turmeric is used to promote digestion and alleviate symptoms in the GI tract. A randomized, double-blind crossover study in 1999 used ultrasound to examine the gallbladder after administration of curcumin, leading researchers to conclude that “curcumin induces contraction of the human gall-bladder” (Raysid et al., 1999).

In a double-blind, placebo controlled study in Thailand, curcumin was compared to placebo and an over-the-counter remedy for indigestion. Eighty-seven percent of the curcumin group had full or partial relief from indigestion after 7 days, compared to 53% of the placebo group (Thamlikitkul et al., 1989).

Turmeric offers such a dynamic array of health benefits that it’s even being studied in regards to its potential effect on serious diseases like cancer, Alzheimer’s, and heart disease. Cardiac specific benefits are its effects on cholesterol, triglycerides, and blood sugar. While studies do not show that it would be a good substitute for cholesterol and diabetes medications, long-term use may help reduce the amount of other medications used in a treatment level.

How to Use Turmeric

Topical and External Use

Because of its antibacterial properties, when combined with a little salt and mixed together as a paste, turmeric can be applied to the skin in response to abrasions and swelling. This remedy is also used to help resolve bruises. Gargling with salt water is often thought to help relieve a sore throat. But turmeric, when paired with salt, has the potential to be even more effective! You can find turmeric at this link or at your local grocery store.

Gargle With Turmeric and Salt

Add to warm water and gargle as you would regular salt water.

The medicinal properties of turmeric may not be absorbed well due to its rapid metabolism in the liver and intestines unless it is consumed with black pepper. In a validating example of the time-tested concept of herbal catalysts (herbs that enhance the activity of other herbs), it turns out that the piperine in black pepper enhances the bioavailability of the curcumin in turmeric by 2000% (Shoba et al., 1998)! Note: black pepper may inhibit drug metabolism so should be used with caution, if at all, by those taking pharmaceutical medications.

Whether by incorporating it into cooking or taking it as one of several herbs in a tea, turmeric is at the heart of many different remedies and continues to prove its value after thousands of years of use.

One such tried and true recipe is “Golden Milk,” a traditional Ayurvedic concoction. Here is our take on this age-old recipe, with the addition of black pepper for enhanced curcumin bioavailability. This yummy, warming drink is delicious in the winter and can be served room temperature or slightly warmed if desired.

Traditional instructions recommend making a turmeric paste first, which can be spread on toast or added to other dishes, but you can also simply add turmeric powder into the milk.

For some individuals, turmeric should not be used at high doses long term (Mills & Bone, 2005), as overuse may cause gastrointestinal disturbances (e.g., diarrhea, nausea, ulcers) in some susceptible people (McIntyre, 2005; Ehrlich 2014). Turmeric is considered contraindicated in the case of biliary tract obstruction due to potential bile-stimulating activity, and those with a history of biliary tract obstruction  should gain professional advice before using turmeric at therapeutic doses (Mills & Bone, 2005; Gardner & McGuffin, 2013).

Because turmeric may have antiplatelet and blood-thinning activity, individuals on blood-thinning medications should exercise caution when considering therapeutic use and speak with their healthcare professional or pharmacist prior to self-administration (Mills & Bone, 2005). For similar reasons, it is also generally advised that individuals undergoing surgery stop consuming therapeutic doses of turmeric at least two weeks prior to their procedure (Ehrlich, 2014).

Eating foods with turmeric during pregnancy is generally considered safe, however turmeric should not be taken in high doses by pregnant women due to its potential emmenagogic effects (McIntyre, 2005; Ehrlich, 2014).

Learn more about turmeric and other herbs in the Online Intermediate Herbal Course, featuring over 100 recipes for health and wellness.

Rasyid, A., Lelo, A. The effect of curcumin and placebo on human gall-bladder function: an ultrasound study. (1999) Alimentary Pharmacololgy and Therapeutics, 13:245-249.

Annie manages The Herbarium editorial calendar and plant monograph database. She is part of the editorial team for the blog and educational programs.