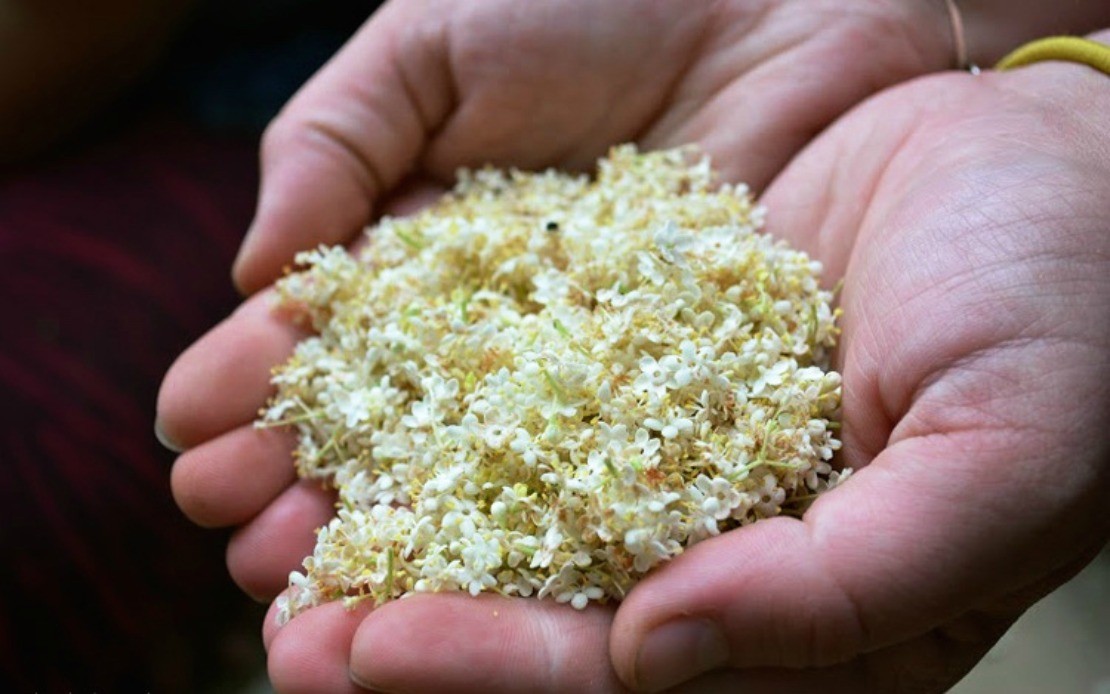 In recent years, much has been written about elderberries, “the medicine chest of the common folk.” But as lovely as elderberries are, elder flowers are a wonder in their own right. Familiarize yourself with the elder flower and its properties. Using elder flowers may just be the highlight of your summer!

For purposes of this article, I am referring to Sambucus nigra (European) and Sambucus canadensis (North American).

An elderberry bush or small tree (depending on where you live), is a perennial, surviving in zones 3 ­– 8. It likes sun or partial shade, although it produces less fruit in shady areas. It prefers nitrogen-rich soil, but tolerates poor soils, and is found everywhere from creek sides to forest edges and ditches. If you have an elder in your yard, be careful with a tiller around it, since they have a shallow root system and can be easily damaged.

Elder belongs to the Caprifoliaceae, or honeysuckle family, although there has been talk of reclassifying it into the Adoxaceae, or viburnum family. The nigra is native to Europe, North Africa, and western Asia. Canadensis is native to North and Central America. Elder has opposite, compound leaves composed of five to nine oval and toothed leaflets. The leaves are dark green, but lighter on the underside. The bark is gray or light brown.

The stem’s pith allows it to be hollowed out with ease, and it has been used as a tap for collecting maple sap. Kids have also been known make whistles and pea shooters from the hollowed stem. Traditionally, the pith was saved to use for starting fires.

The aromatic flowers appear in the late spring or early summer, depending on where you live. They are creamy, white umbels, although some sources refer to them as corymbs. They can be as wide as eight inches across. The flowers open from the outside to the inside, so when harvesting, take the ones that are fully open in the center, remembering that the more flowers you remove, the fewer berries you will have later in the summer. Avoid harvesting flowers after a storm or when they are wet, because they will turn dark when dried. (They should remain creamy color.)

Propagation can be either through seeds, suckers, or root divisions. If you to start elder from seed, follow the instructions carefully, since the seeds must be soaked and stratified to ensure germination.

Typically, I go out in February or early March and take cuttings that include at least three nodes. I plant them in a large pail of sterile soil and keep them in the house. They are usually rooted and ready for transplanting in early June. Elders need about an inch of water a week, so be sure to irrigate them during dry spells.

Dried elder flowers can also be picked up here at Mountain Rose Herbs if you don’t have access to the plant.

Elder is one of those plants surrounded by mystery, magic, and superstition. It’s not called “Elder” without reason!

The ancient Celts believed a spirit lived in the elder who must not be angered. It was often planted around homes for protection (especially against lightning); however, one must never anger the Elder Mother, or she might bring in the lightning. Permission was always sought three times prior to cutting branches, but they were never to be used as firewood or for woodworking, since doing so would conjure up ghosts. An old Celtic rhyme reminds us:

Elder be ye Lady’s tree, burn it not, or cursed ye’ll be.

Gifts of water, beer, milk, cake, or bread would often be found around elder. And the Celts sometimes planted elder trees on the graves of their loved ones, believing that blossoms were evidence of happy souls.

In old England, it was believed that one could see witches if elder juice was smeared around their eyes. Pregnant Celtic and Germanic women would often kiss the elder to ensure their babies would have good fortune.

If you are a Harry Potter fan, you’ll know that a wand made of elder had the most powerful of magic! In the language of flowers, elder flower meant purification and love, or compassion and zealousness.

The Lure of Using Elder Flowers

Using elder flowers in medicine, cosmetics and food is nothing new! In fact, elder flower has been used in these ways for centuries!

Since Egyptian times, topical infusions of elder flowers have been used to reduce facial wrinkles and lighten freckles and age spots. A stronger infusion helped skin rashes, eczema, and measles. Infusions were also included in creams for chapped hands and added to baths for sunburns.

Flowers steeped in oil were beneficial for diaper rashes. The infusion has also been used as a hair and scalp rinse, especially when there are lesions on the scalp.

Ancient texts from Hippocrates (460 – 370BC), Dioscorides (40 – 90 AD), and Pliney the Elder (23 – 79 AD) include information about elder, indicating its longstanding value in herbal medicine.

In 1644, Dr. Martin Blochwich compiled a 230-page book written in Latin entitled The Anatomy of Elder. It was translated into English and published in 1677 and describes the use of elder for 70 different diseases. (The book has been scanned and is available today, although you may have to wait until the publisher has several orders before they print. It is difficult to read, but is interesting and informative, nevertheless.

The energetics of the flowers are bitter and slightly sweet, dry, and cooling and modern day herbalists suggest using an infusion of elder flower as a diaphoretic to induce sweating during a cold or flu.

Elder flowers have an anti-inflammatory effect on the upper respiratory system when under stress from colds, flu, or sinusitis. A traditional blend for treating respiratory complaints includes equal parts of elder flower, yarrow, and mint. Adding boneset when there is achiness is also considered helpful.

Some herbalists believe the flower infusion or tincture may be beneficial for hay fever, but only if started prior to pollen appearing. Additionally, elder flowers may give relief as an expectorant when there is excess mucus. A strong infusion may be used as a gargle for sore throats, and as a compress for headaches. A cold infusion of the flowers has been used as an eye wash for inflamed eyes, for both man and dogs.

My favorite use for the flower of the elder is in fritter form. A variety of recipes can be found in old cookbooks or online; however my favorite recipe appears below!

Fresh elder flowers, with the stem intact
Pre-made pancake mix (One where you only add water is perfect.)