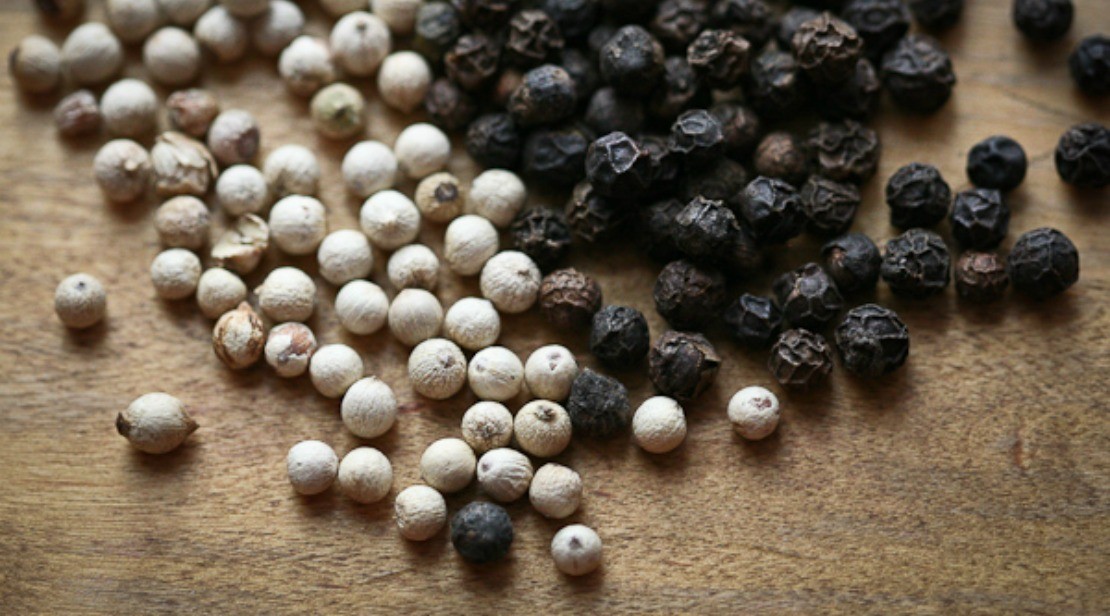 It’s hard to imagine an American dining table without a black pepper grinder or shaker. A tropical vine native to India, black pepper (Piper nigrum) is reported to have become a staple of the American table after it found its way over from Europe where it was highly prized several centuries ago. And yet, is the extent of black pepper’s appeal limited to the tasty goodness it adds to any given dish? Or does it serve as a staple in herbal circles as well? You may be surprised by the medicinal uses of black pepper, not commonly revealed.

Traditionally, black pepper has been used in a variety of different remedies and for different purposes. According to Ayurveda, the pungency and heating properties of black pepper work to help metabolize food as it is digested in our system. Its heat works as a stimulant like lighting a fire might (Lad, 1984). This stimulating quality is also used to clear congestion in the respiratory system as well as other processes.

Choose whole peppercorns and store away from light ready to grind them. Look for peppercorns that are uniform and rich in color, with a strong aroma. Organically grown black pepper associated with a fair trade cooperative is highly preferable to conventional pepper. Black, green, and white peppercorns all come from Piper nigrum, and are unique in color and taste because of differences in processing and preparation.

Like many aromatic kitchen herbs, black pepper is considered a carminative in Western herbalism, and in Ayurveda black pepper is known to enkindle agni, the digestive fire (Lad, 1984). These actions are likely due to the taste of black pepper on the tongue triggering the stomach to release hydrochloric acid, which is needed to digest protein, and pepper’s ability to stimulate digestive enzymes in the pancreas (Srinivasan, 2007).

Black Pepper is an Antioxidant

Black pepper and honey is a traditional Ayurvedic approach to respiratory congestion, helping to expectorate and dry up mucus membranes (Frawley, 1986). In Western herbalism, it is used in antiseptic cold and flu preventatives like fire cider.

Only culinary amounts of black pepper should be used by those who are pregnant and breastfeeding. Black pepper may inhibit drug metabolism so those taking certain pharmaceutical medications should speak with their physician prior to using black pepper. It is neither recommended nor necessary to take pepper in large amounts, as culinary use (1/2 teaspoon or less) goes a long way.

A constituent called safrole found in very small amounts in black pepper as well as basil, star anise, nutmeg, and ginger was given a bad rap after researchers injected high quantities of the chemical into rats, who subsequently developed liver cancer. However, such a study tells us nothing about the effect in humans eating small amounts of the whole peppercorn. In contrast, research data on humans and whole black pepper consumption indicates that black pepper has anti-carcinogenic actions (Liu, 2010). In any event, safrole content significantly decreases when peppercorns processed according to traditional preparation methods involving heat and drying.