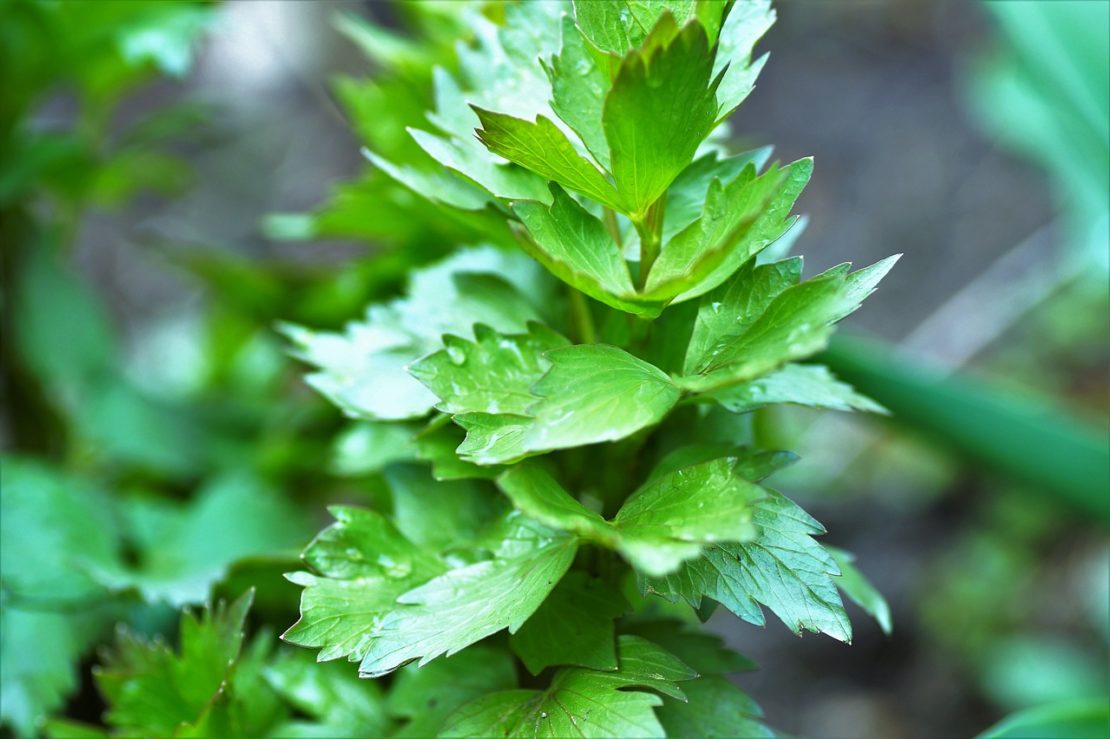 If we were to walk back in time and enter a medieval medicinal or kitchen garden, in the back we would surely find a relatively unknown plant today—lovage. Unlike many herbs, lovage may have begun its journey with humans as a therapeutic plant and evolved into the culinary plant too few of us enjoy today. Let’s take a look at this plant and explore some of the little-known ways to use lovage.

Levisticum officinale, from the Apiaceae (carrot/parsley) family, is native to Southern Europe and the mountainous regions of the Mediterranean.

Lovage is a perennial in zones 3-9. It’s one of the first up in the spring in our area. It’s about twelve to fifteen inches tall when the dandelions bloom but can grow to be six or seven feet tall and makes a lovely background border to any garden. Like other early plants, it is loaded with vitamins: vitamin C and B vitamins.

It likes full sun but will survive in part shade (although it won’t get quite as tall).

If you are interested in planting lovage, it is best to try to get a transplant from someone. Germination of the seeds isn’t reliable and usually has about a 50% viability. I have found that harsh winters (zone 3) don’t impact the regrowth of lovage very much. Other plants may die off, but lovage is hardy, although, I find that spring transplants have better success than fall ones.

One of the few garden problems with lovage are aphids. It also companion plants well with root plants; it seems to help their growth.

The plant flowers in late June in our area with an umbel yellow-greenish blossom. Lovage is considered a pollinator plant. 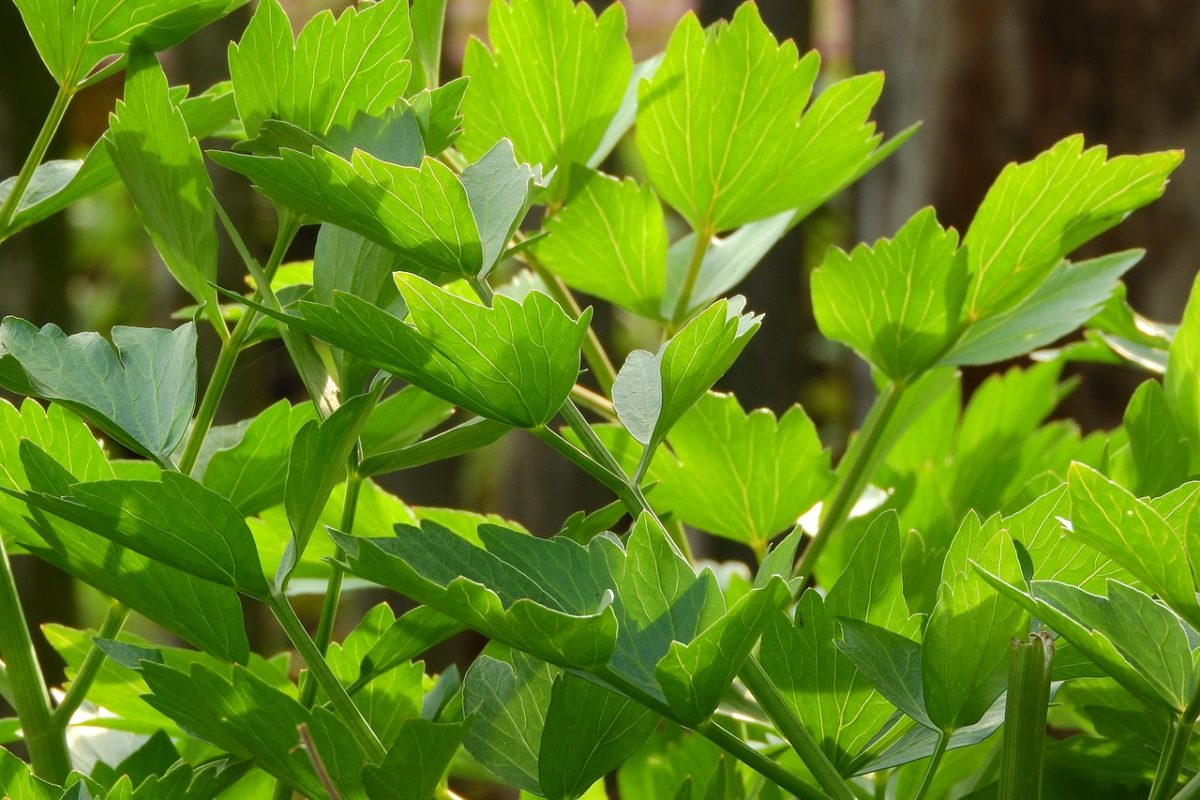 The History of Lovage

The history of lovage goes back to the ancient Greeks who chewed the leaves for digestion and gas. The leaves were placed in the shoes to relieve weary feet (McVicar, 1997).

The seeds were nearly as expensive as black pepper at one time.

Hildegard of Bingen used lovage in her cooking.

John Gerard believed lovage was one of the best remedies of his time (mid 1500s).

Culpepper claimed that the powdered roots mulled in wine would “warm a cold stomach, helps digestion, and consumes all raw and superfluous moisture therein” (Culpeper, 1814).

Lovage came to America with the early New Englanders and was often found in their gardens. New Englanders would candy the root and chew on the seed during long church services to keep them alert.

Lovage was one of the seeds found in the early American Shakers’ seed sales.

What makes lovage so special to those of us who appreciate it is that it tastes like celery. It was originally popular as a salad green before celery was as common as it is today.

All parts of the plant can be used. The leaves can be chopped up and added to any dish you would use celery in including salads, soups, stews, frittatas, egg salad, and potato salad. The flavor is stronger than celery, so use it accordingly. If you like bloody Mary’s, the hollow stalk of the lovage is for you!

Cordials were made primarily with the seed, and one popular medieval recipe included both yarrow and tansy. 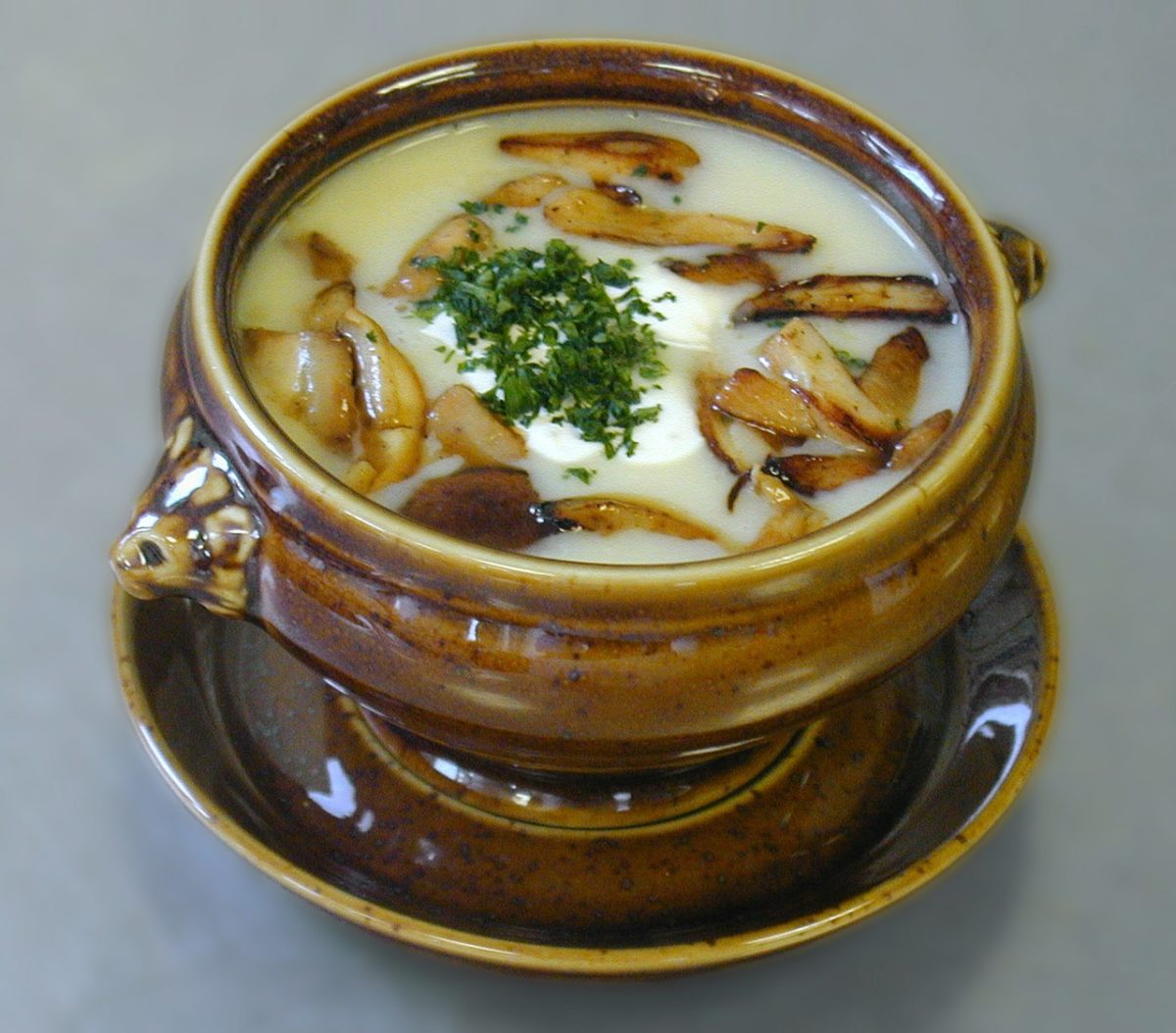 You can add carrots or other veggies as you like; just increase the liquid amount (either the broth or the milk) until you reach your desired consistency. If you’re not feeling well, add garlic.

Although I was told that lovage does not dry well, I have not found that to be the case. I dry the leaves as I would any other plant and put them in airtight glass jars. I later crush or powder them and use when needed for flavoring. The leaves should be removed from the stems prior to drying or they will turn yellow. I try to harvest my leaves before they flower. As with other plants, they will become a bit bitter after flowering.

Lovage has been used in infusions, tinctures, decoctions, vinegars, elixirs, lozenges, and bath and foot soaks.

All parts of the lovage plant have been used therapeutically (and culinarily). Teas of the leaf and stalk were common and used for sore throats and tonsil problems, rheumatism/arthritis, jaundice, and for digestion. Lovage is known to be a diuretic and was considered good for kidney stones and to increase the flow of urine (Wood, 2007).

The seeds, collected when ripe, were chewed on for digestion and gas.

At one time boils were treated with the lovage leaves fried in oil and used as a poultice.

Lovage is in the same family as osha (Ligusticum porter) and therefore, some herbalists consider it as possible lung ailment relief (Wood, 2007).

If you are using foot soaks (another ancient modality), try using lovage (any part) with mint, thyme, lavender, and rosemary in equal parts to as warm a water as you can comfortably tolerate. I like to add a ½ teaspoon of dried mustard powder to open the pores. I put a bag of marbles in my foot soaks because when rubbing your feet on them, you are touching most of the reflexology points in your feet.

Lovage, although relatively unknown in our herbal world today, is one of the ancients that should, perhaps, be given another look as either a culinary or health supporting herb to grow in your garden.

So there you are. Seven little-known ways to use lovage. I hope you’ll consider this plant when designing and planting your garden this year. If you like culinary herbs, this is a new one to try, just like celery, but better. If you like health supporting herbs, there is a lot of information out there on historical uses of lovage, some of which may still hold true today.