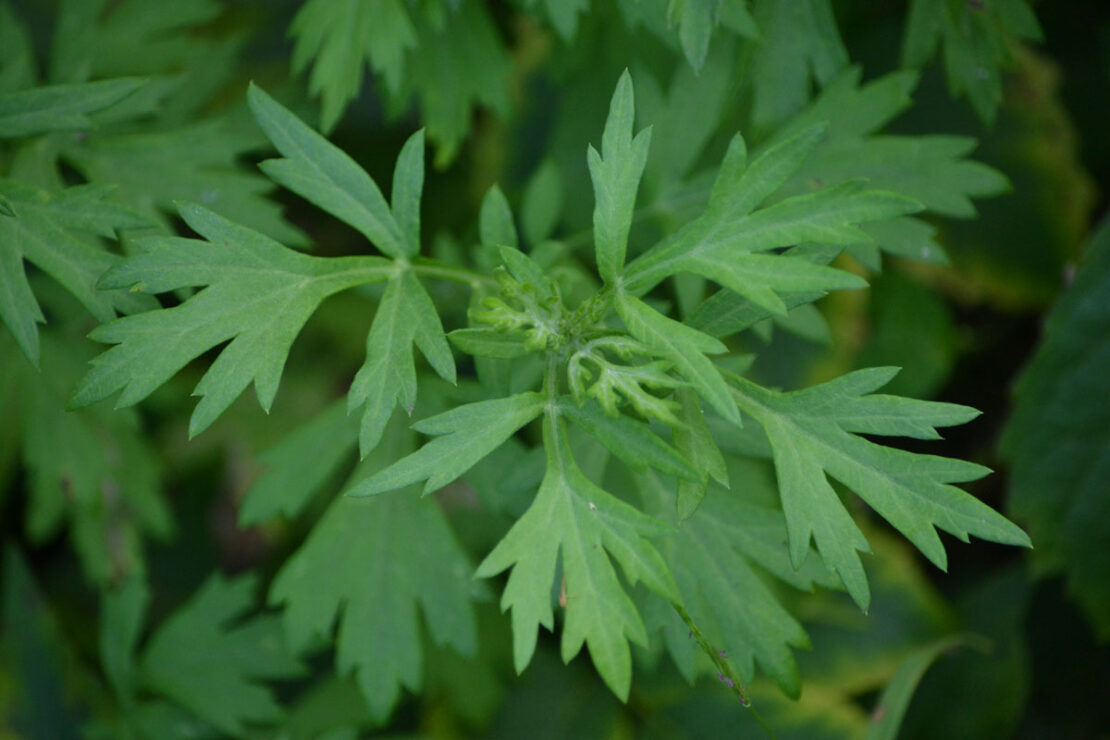 When I was camping in the Gifford-Pinchot National Forest as part of my studies at the Elderberry School of Botanical Medicine, I rolled an herbal smoking blend that I made with mugwort (Artemisia sp.) as one of the main ingredients. I shared it with the group while we were sitting around the campfire. That night, I had extremely lifelike and colorful dreams of myself hiking around the forest. The colors of the trees and plants were incredibly vibrant. I could feel the soft wind on my face. During the hike in my dream, I stumbled upon St. John’s wort (Hypericum perforatum), a plant that I had never met in the wild before. I didn’t know what it looked like, but at that moment, I just knew what it was. When learning how to use mugwort, you often hear about its traditional use for enhancing dream clarity; however, this was my first direct experience with it, and it was so vivid!

The next day, some of my classmates announced they were leaving the group to harvest St. John’s wort across the way and invited anyone who would like to join. Of course, I did, finding the occasion quite serendipitous. That was the start of my journey of using mugwort for dreams and sleep. In this blog post, we will explore how to use mugwort, its traditional uses, as well as some of the folklore and facts about how mugwort can enhance the dream state. 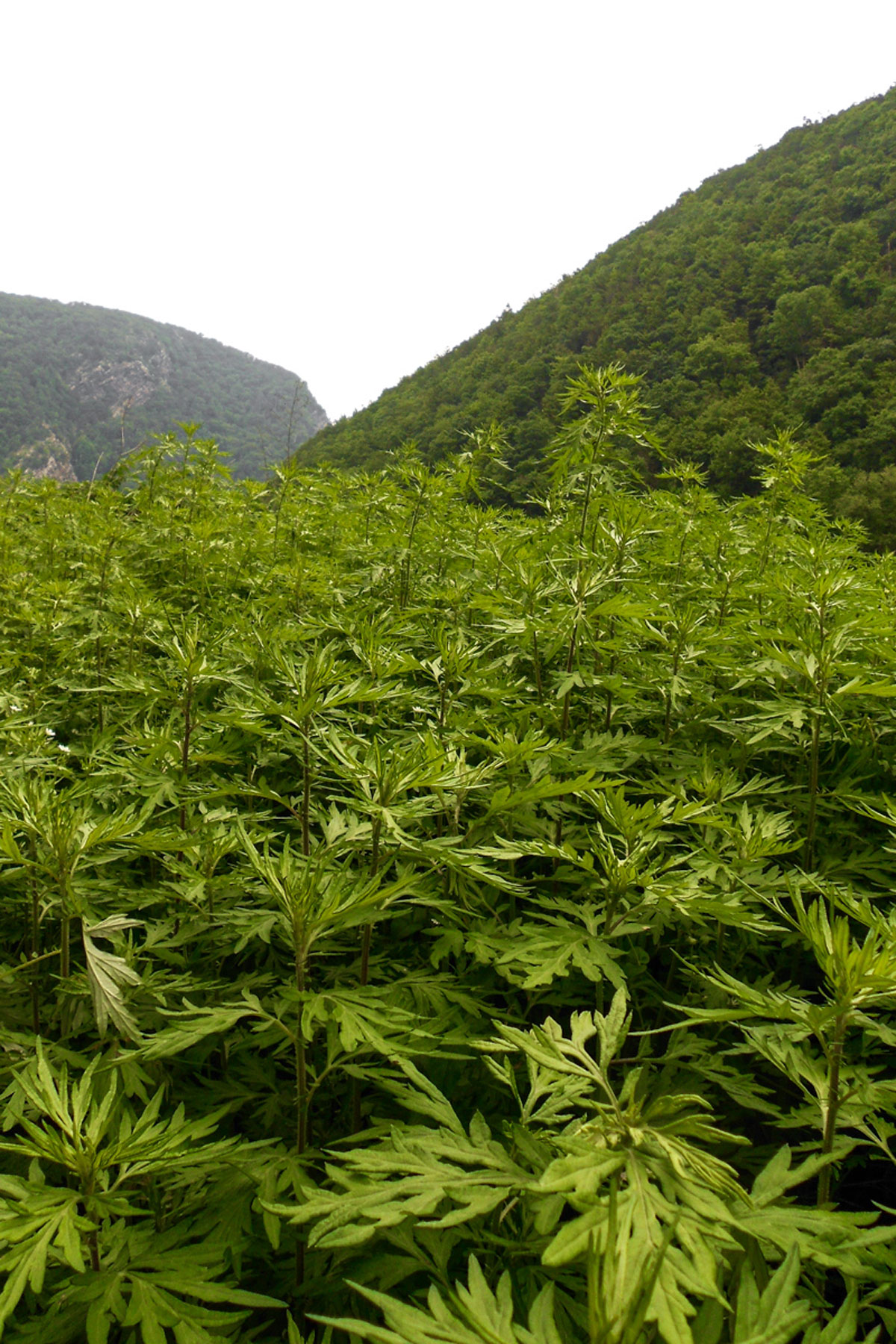 It is important to note that there are many different types of mugwort and a number of plants in the Artemisia genus; a lot of them are traditionally used in herbalism. Some of the plants within this species share similar aspects, while others are quite dissimilar. All Artemisia species are antimicrobial and stimulate digestion to some extent, but some, not all, species are nootropic, meaning that they enhance memory and cognitive function (Yarnell, 2012).

Some Artemisia species are given the common name of “sage,” which is confusing because they are different from the actual sage plant, Salvia officinalis (Yarnell, 2012). This may be due to the similar aromatics of mugwort and sage. Some native western Artemisia species include Artemisia tridentata (big sagebrush), A. ludoviciana (white sagebrush, western mugwort), A. absinthium (wormwood), A. annua (sweet Annie), and A. douglasiana (California mugwort) (Yarnell, 2012). Artemisia ludoviciana is used quite similarly to A. vulgaris (common mugwort), so we will focus on these two species. 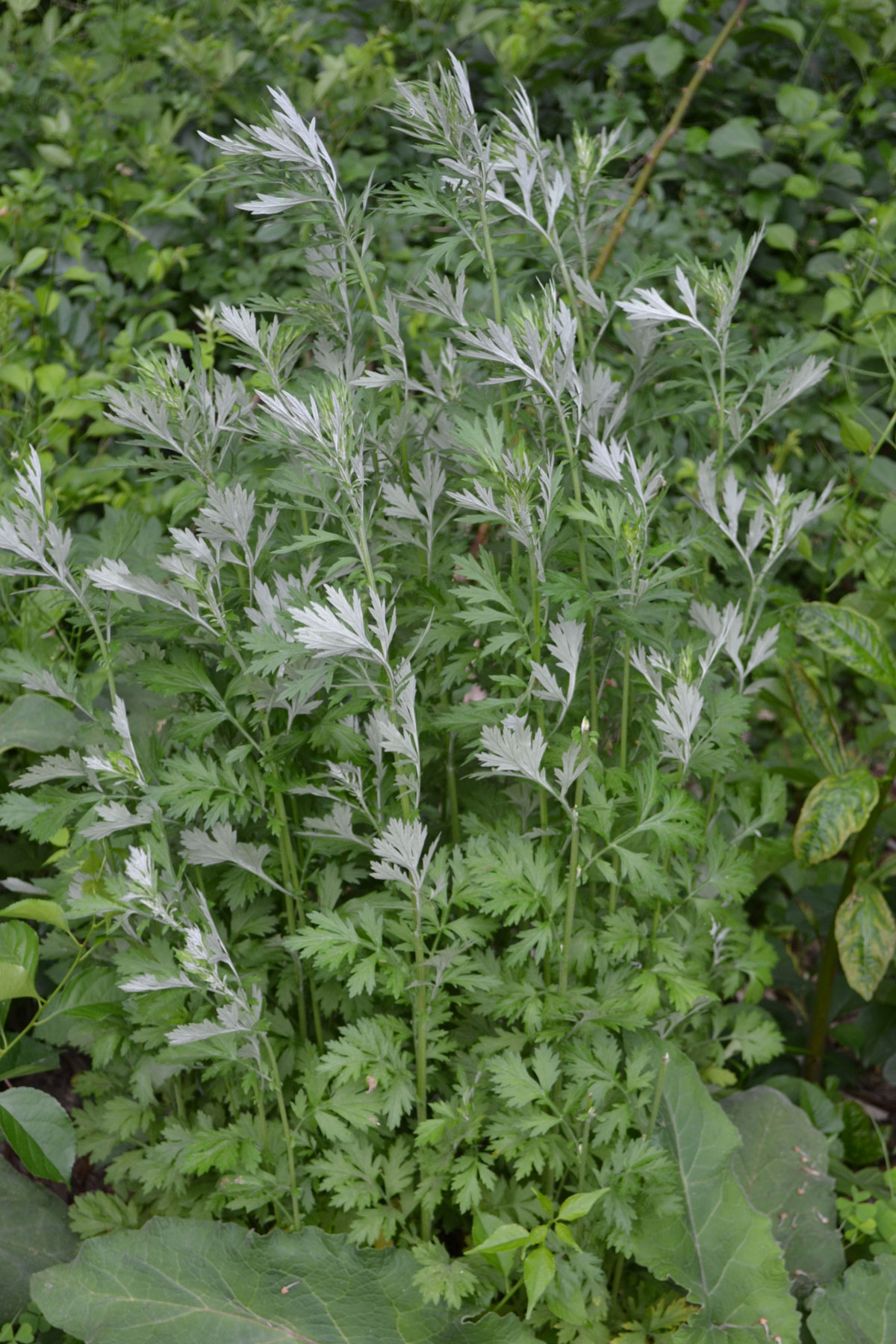 How to Use Mugwort (Artemisia vulgaris)

There are many different ways to use mugwort in herbal preparations—from topical to internal, and inhalation. The most common ways to ingest mugwort are by making a cold or hot infusion or taking a tincture. When seeking dream support or a more energetic experience with the plant, some folks prefer to ingest the flower essence, which can be just as effective (Andrews, 2015).

Mugwort is said to be mentally stimulating when added to smoking mixes. It also has a long history of being used as a smudge to clear negative energy from a space (Kloos, 2017).

In acupuncture, mugwort is used in moxibustion, a method of heating specific acupuncture points on the body by burning dried mugwort (often referred to as moxa) close to the skin. This technique is sometimes done alone or in combination with acupuncture (Nowakowski, 2016).

Mugwort has also been used topically to address fungal infections on the skin (Kloos, 2017). It can be applied topically as a tea, vinegar tincture, or compress, or by extracting the herb in oil and using that on the body, or incorporating it into a salve. 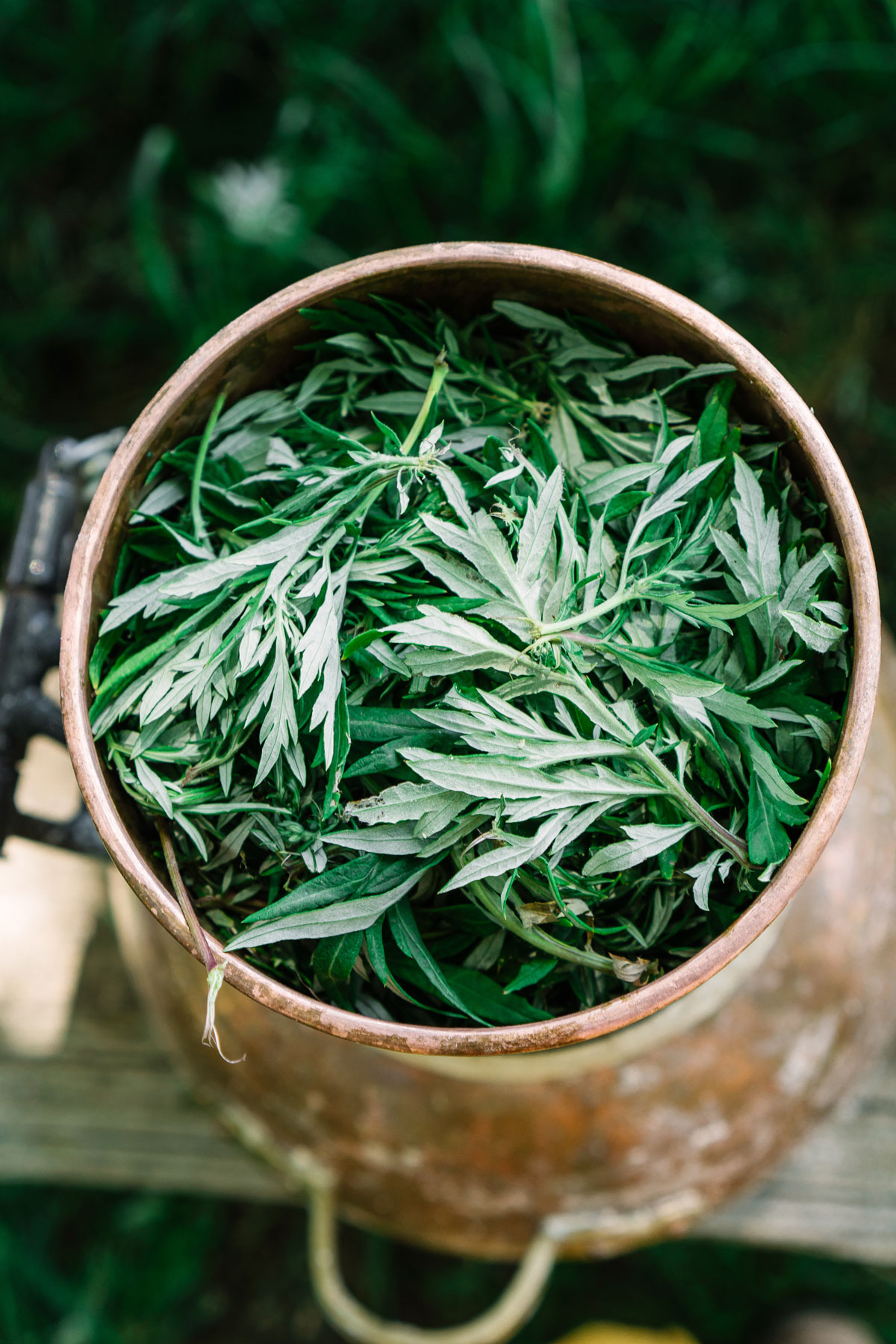 Due to the uterine-stimulating effects of mugwort, it is advised to avoid using this plant in any form if you are pregnant or attempting to become pregnant (Kloos, 2017). Do not attempt to use mugwort in moxibustion without working with a trained professional. Mugwort contains thujone, which can have neurotoxic side-effects when used in excess, so it is not recommended to take mugwort as a tonic herb. Some people can be allergic to the pollen of mugwort flowers (Barrett & McNamara, 2012).

Mugwort has traditionally been used to soothe anxiety, as well as calm folks who are recovering from traumas like a seizure or drug overdose (Barrett & McNamara, 2012). Due to its calming nature, mugwort is often associated with sleep; however, its effects on dreams are what mugwort is most known for. Artemisia, the Latin botanical name of mugwort, comes from the name of the Greek moon goddess, Artemis (Nowakowski, 2016). The moon, as a guiding light of the night, hints at mugwort’s abilities to enhance dreams. In folklore, it is said that mugwort helps the dreamer remember their dreams easier (Long, 1998). It is also said to help increase awareness during dreams, stimulate lucid dreaming, and increase psychic sensitivity (Andrews, 2015). Mugwort is believed to initiate clarity of the dream experience and bring awareness to the dream’s purpose in waking life. It is known as a visionary herb that opens one to dreams of the future (Andrews, 2015).

Mugwort has been classified as an herbal oneirogen, which is a plant that produces or enhances dream-like states of consciousness (Barrett & McNamara, 2012). Unfortunately, most of the oneirogenic benefits of mugwort have not been scientifically confirmed due to lack of funding in research (Barrett & McNamara, 2012). However, over centuries mugwort has been admired for its magical, mystical, and spiritual uses, especially for clairvoyance and warding off evil energy (Barrett & McNamara, 2012). Herbalist Scott Kloos (2017) says that mugwort leaves in all forms— tea, tincture, smoke, or even hung above the bed or placed under the pillow—promote vivid dreams and help uncover, access, and transform areas of psychic unconsciousness. Regardless of the lack of research-based studies, this unique plant continually shows up in many different anecdotes and literature across time.

Learn more about herbs for sleep in Herbal Dreamtime: 6 Herbs to Enliven Your Dream Space. 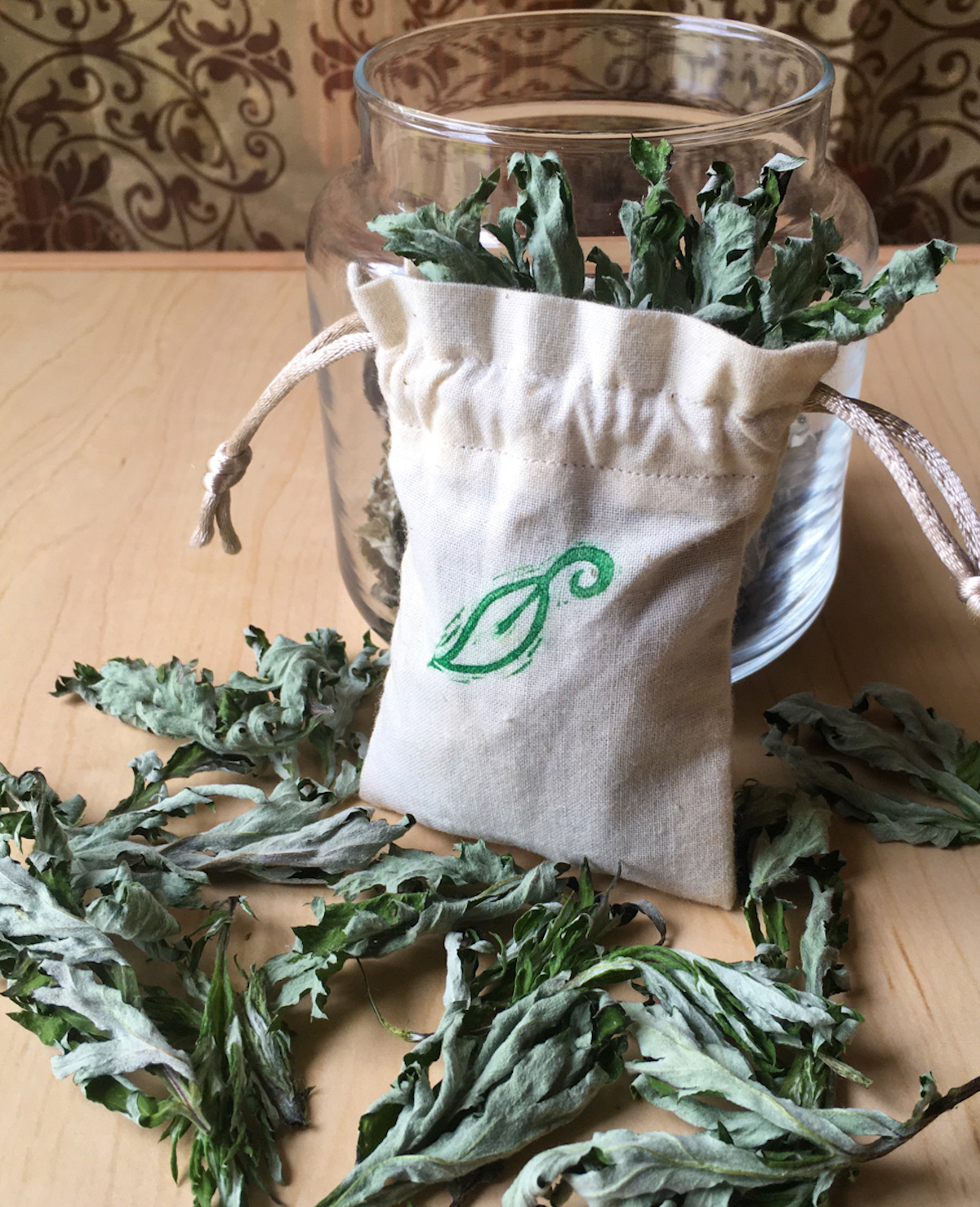 Other Traditional Uses of Mugwort

Mugwort has been traditionally used in herbalism for many purposes beyond sleep and dreams. Due to its very aromatic bitter qualities, it has been commonly used to aid in digestion, stimulate appetite, and calm an irritated stomach (Kloos, 2017). It can also be helpful for chronic gastritis and gastric ulcers (Moore, 1993).

Mugwort is also a great plant ally for menstruation. In Chinese herbal medicine, mugwort is commonly used to lessen heavy menstrual and uterine bleeding and can help increase blood circulation to the pelvic region for menstrual pain relief. Trained users of moxibustion of mugwort have successfully turned breeched babies into a safer head-down position before childbirth (Nowakowski, 2016). Mugwort has also been commonly used to start or regulate the menstrual cycle (Moore, 1993).

As a strong antifungal, mugwort can be helpful in addressing pinworms and fungal skin issues, like athlete’s foot, ringworm, tinea versicolor, and more (Kloos, 2017). It is generally suggested that mugwort be used internally when addressing pinworms, and topically when addressing skin issues. It has also been used for general first aid purposes, due to its antimicrobial and somewhat anti-inflammatory properties (Moore, 1993). The tea or vinegar tincture can be used as a liniment for sprains, bruises, or hyperextensions, or on the forehead for headaches (Moore, 1993).

Mugwort is one of my favorite herbs due to its various, and sometimes even mystical properties. Its dynamic ability to enhance dreams, thoughts, and memory, as well as support sleep, digestion, menstruation, and other physical ailments is truly amazing. I hope that after reading this blog post, you now have a better understanding of how to use mugwort and feel empowered to incorporate it into your herbalism journey. 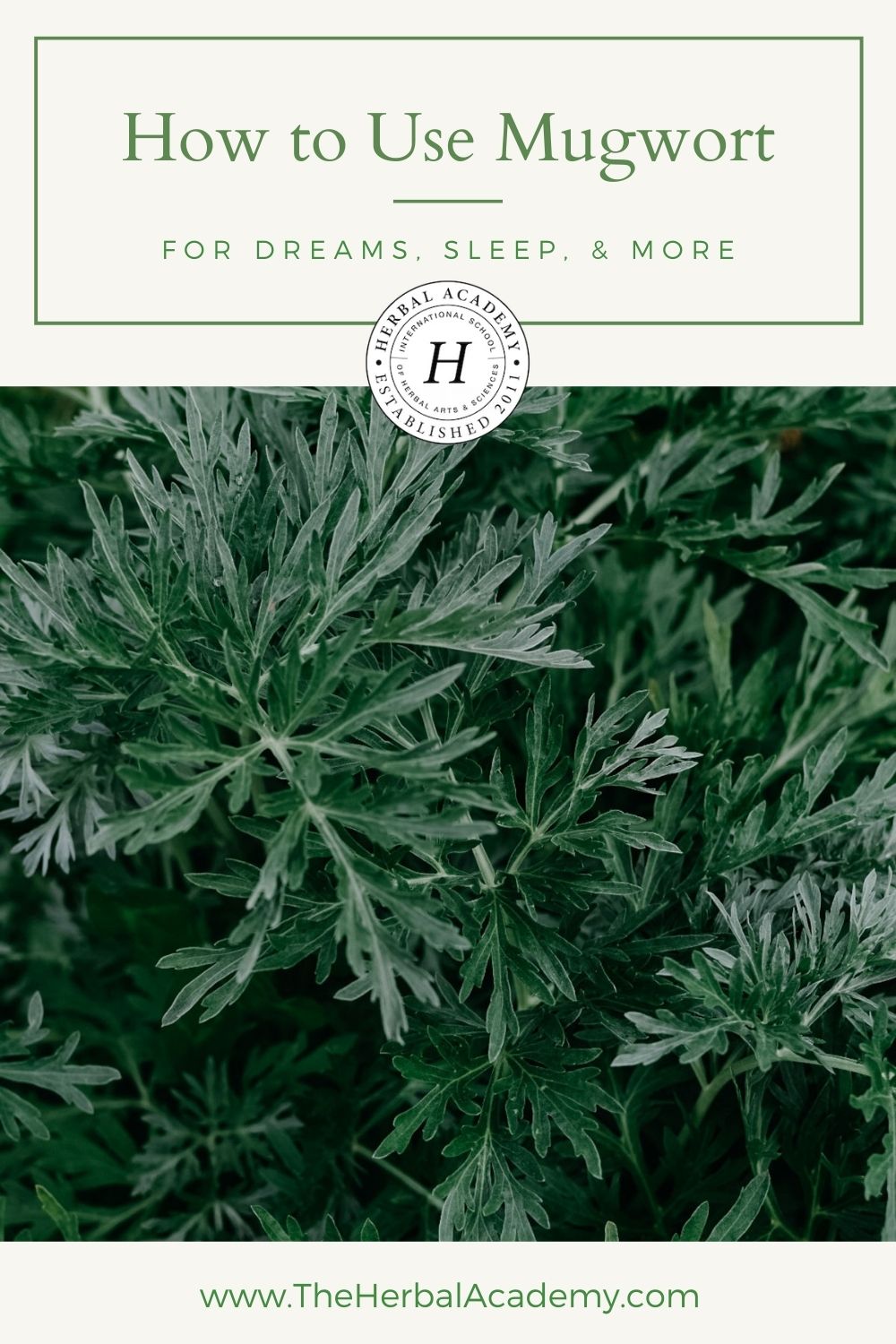