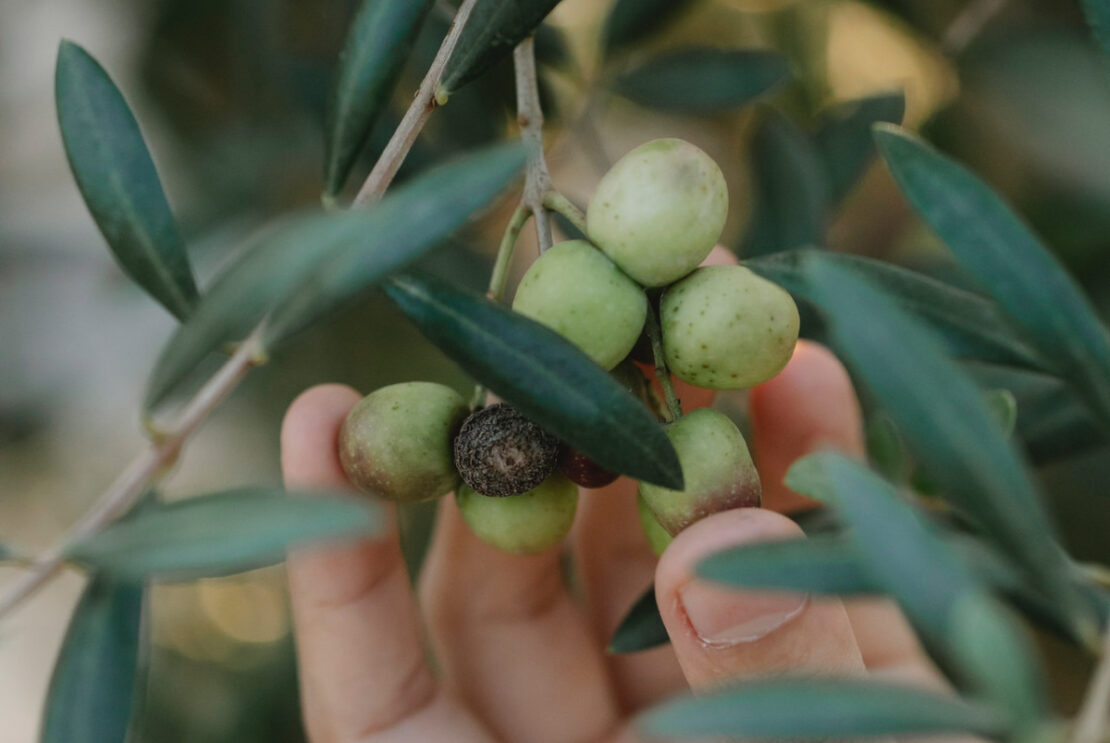 Greece is a beautiful country surrounded on three sides by the Mediterranean, Aegean, and Ionian seas. Ranked as one of the sunniest countries in Europe, Greece is a popular vacation destination for visitors from around the world who seek to experience its exquisite beaches and seaside resorts. In addition to its promise of fun in the sun, this small, delightful country also provides a haven for a diversity of flora and fauna. From its seaside to its mountains, the herbal wonders of Greece are a treasure trove for exploring, which provides an impressive display all year round. 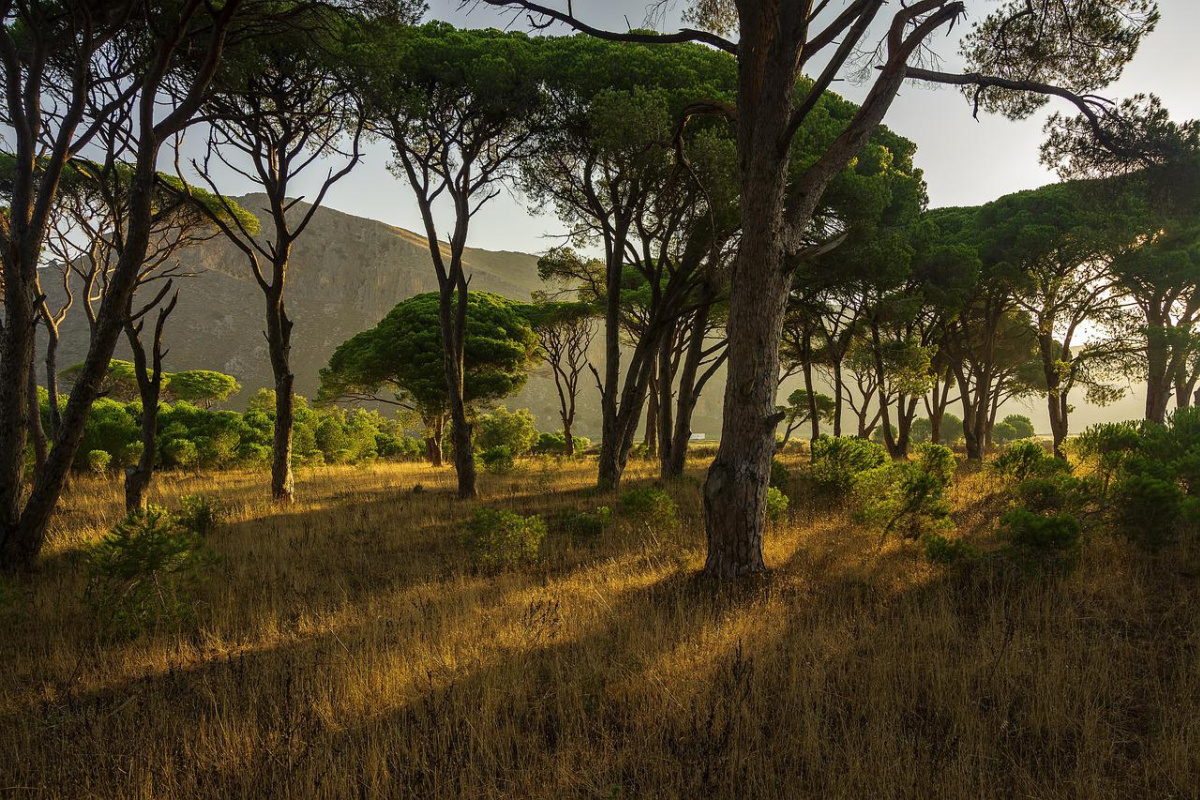 Climate and Terrain of Greece

To begin our exploration of the herbal wonders of Greece, we first must familiarize ourselves with the climate and terrain of the country. Greece experiences hot and dry summers and cold and wet winters. Generally, the northern part of Greece features colder winters with considerable snowfalls, while the southern part and most of the islands feature rainy winters with little snowfall. The strong heat of the summer sun, which can sustain temperatures in the 90s degrees Fahrenheit, is felt throughout Greece. The mainland and islands in the north, with their wetter winters, enjoy more lush and fertile soils. The northwestern island of Corfu, for example, has much more greenery to its landscape than the islands in the south, whose mountainsides appear barren and brown in the summer because of the dry, scorching heat. There are amazing plants to explore all over Greece, both in rich, fertile land and in dry, rocky soils.

In addition to differences in climate, the terrain of Greece also differs among the regions of the country. While Greece is known for its beaches on more than 200 islands, approximately 80% of the land terrain in Greece is mountainous, including the 6,000 habitable and inhabitable islands in the surrounding seas. Most notably within these regions are specific areas with a unique environmental footprint and rich biodiversity of flora, which include the island of Crete, central Greece, and the Peloponnese region. These areas include forest ecosystems and have been identified as locations with the highest number of endemic species and subspecies in Greece (Legakis et al., 2018; Petrakou et al., 2020). A recent study by the Convention on Biological Diversity estimated that there are 6,600 species and subspecies of Greek flora, of which 1,278 are endemic (Legakis et al., 2018). Both the mountain and seaside biospheres have historical and cultural importance, as many of these species of trees and plants were used as food, medicine, and in sacred rituals in ancient Greece. Understanding the climate and terrain of Greece can help us understand the diversity of plants—and their qualities—that grow in these varied environments.

Among the most obvious botanical wonders of Greece are the well-known herbs and spices which grow wild throughout the landscape and are cultivated on farms throughout the country. Oregano (Origanum vulgare), mint (Mentha spp.), sage (Salvia spp.), Cretan dittany (Origanum dictamnus), and mountain tea (Sideritis spp.), among many other herbs, are popular among both locals and visitors for their flavorful additions to culinary dishes and their significant health benefits. Each herb also provides a strong link to a celebrated ancient past when herbs played a major role in household and religious customs. Let’s briefly explore some of these herbs (if you are an Herbarium member, read my Ancient Greek Herbal Medicine Intensive for more in-depth exploration):

Greek oregano (Origanum vulgare) is abundantly used in culinary recipes, especially meat dishes and the characteristically popular menu item of roasted lamb. Greece has ten species of the genus Origanum, and among these, Greek oregano is considered “true oregano” as it is the most pungent and has the strongest herbal potency. The herb is cultivated and wildcrafted on mountainsides across the country. Scientific studies have demonstrated oregano’s potent antioxidant, anti-inflammatory, antibacterial, and antifungal properties which support a strong immune response (Association for the Advancement of Restorative Medicine, n.d.). This herbal wonder was considered a symbol of happiness in ancient Greece, and today adds joy to many flavorful meals. 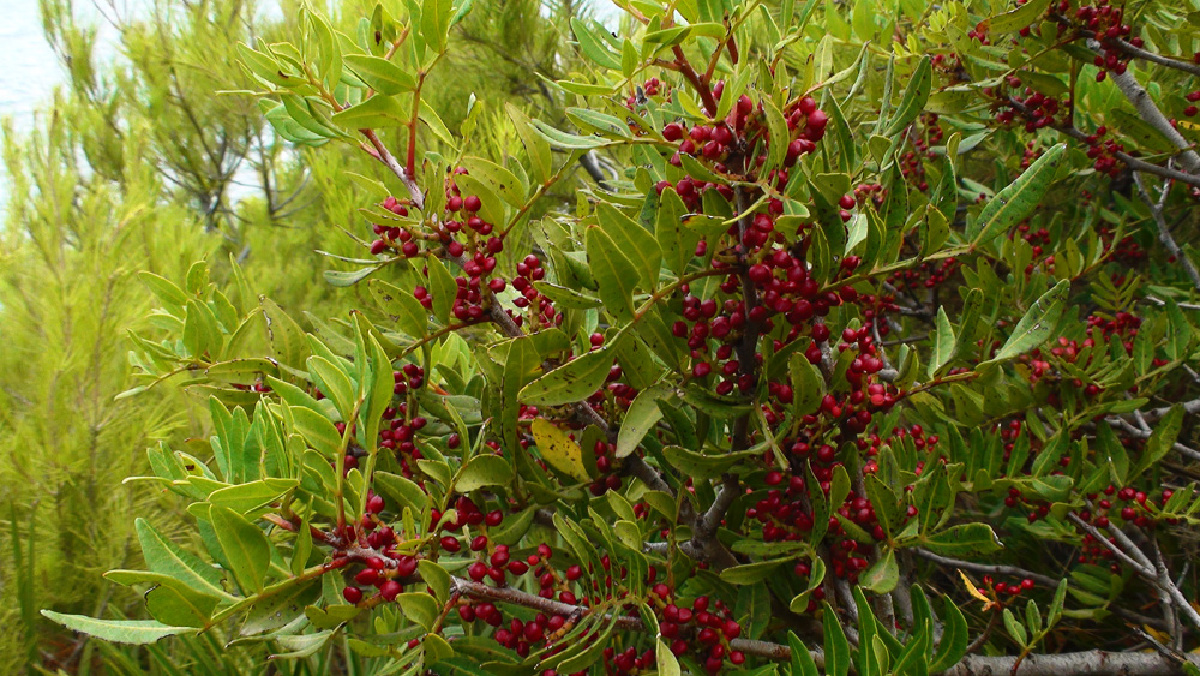 Mastic (Pistacia lentiscus) is an evergreen shrub or tree that produces a powerful resin that has been harvested for the past 2,500 years. Mastic resin, also called mastikha or gum mastic, is included in many culinary recipes, chewing gum, liquor, and botanical skin care products. It has a slightly sweet, earthy taste with vanilla and pine undertones. The mastic tree grows throughout the Mediterranean, but its sap is predominantly cultivated on the Greek island of Chios, where there are well-established and highly sustainable harvesting practices. Scientific research suggests that mastic contains powerful antioxidants and has anti-inflammatory, antibacterial, and antifungal properties (Triantafyllou et al., 2007). This herbal wonder has earned fame for several villages on its island home of Chios which were established in medieval times. In honor of the cultural significance of the resin, the Chios Mastic Museum opened in 2020 (Chios Mastic Museum, n.d.). 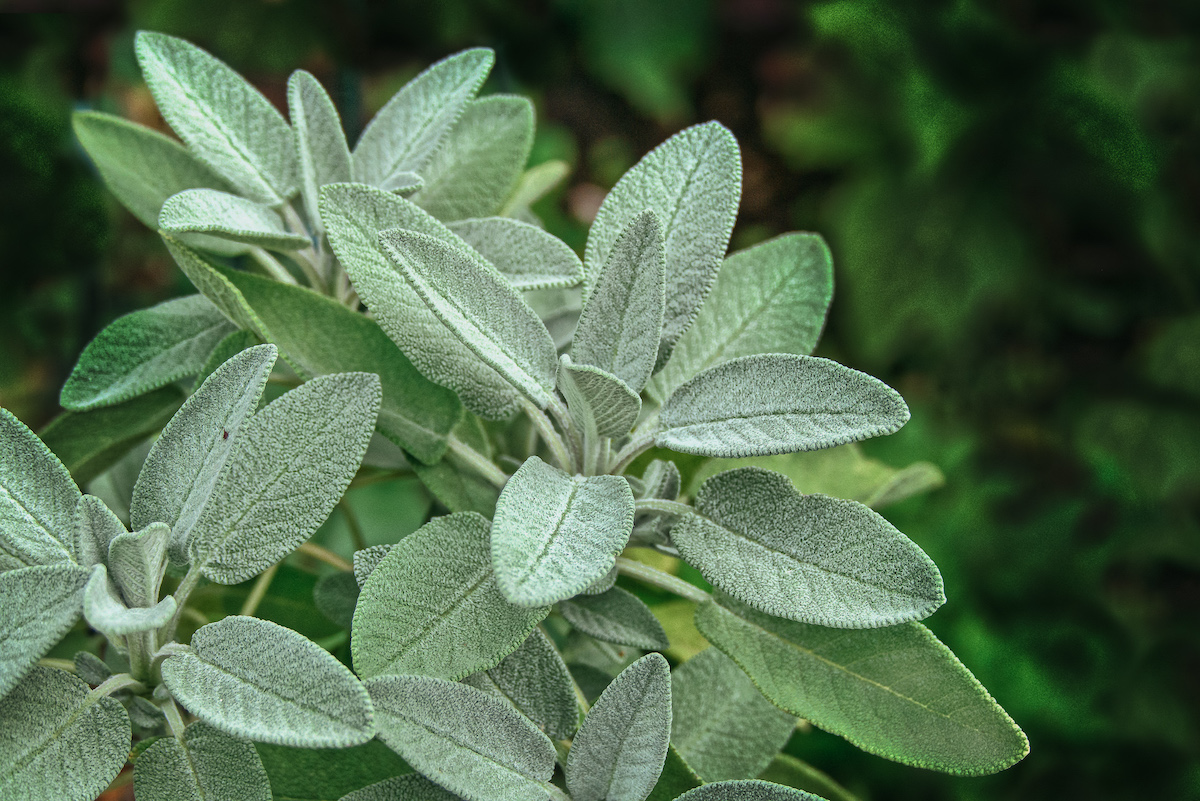 Sage (Salvia officinalis) and Greek sage (Salvia fruticosa) are both known in Greece as faskomilo. This herbal wonder is widely popular in both Greek homes and restaurants, where it is enjoyed as a strengthening tonic tea beverage. The herb has antiseptic, digestive, and antidiabetic qualities that help protect against inflammation, boost immunity, and support respiratory health (Hamidpour et al., 2014). Sage has also been shown to improve memory and alleviate depression (Hamidpour et al., 2014). It is an evergreen shrub that grows best in hot and dry climates on rocky landscapes, making the hilly Greek countryside a prime setting.

Other Herbal Wonders of Greece

In addition to these popular herbs, other herbal wonders of Greece can be found throughout the country and during all four seasons. During the hot, dry summer, Greece is ripe with cultivated herbs, fruits, and vegetables. On the mountainsides, the dry heat is a great environment for plants that require little water and enjoy full sunlight. Some of the plants that thrive in this climate are those that reflect these same characteristics. For example, oregano has hot, dry herbal properties, reflective of the hot, dry climate it thrives in. While not all plants can be easily categorized in this way, the variety of plants in Greece and the correlation between their properties and habitats is impressive. 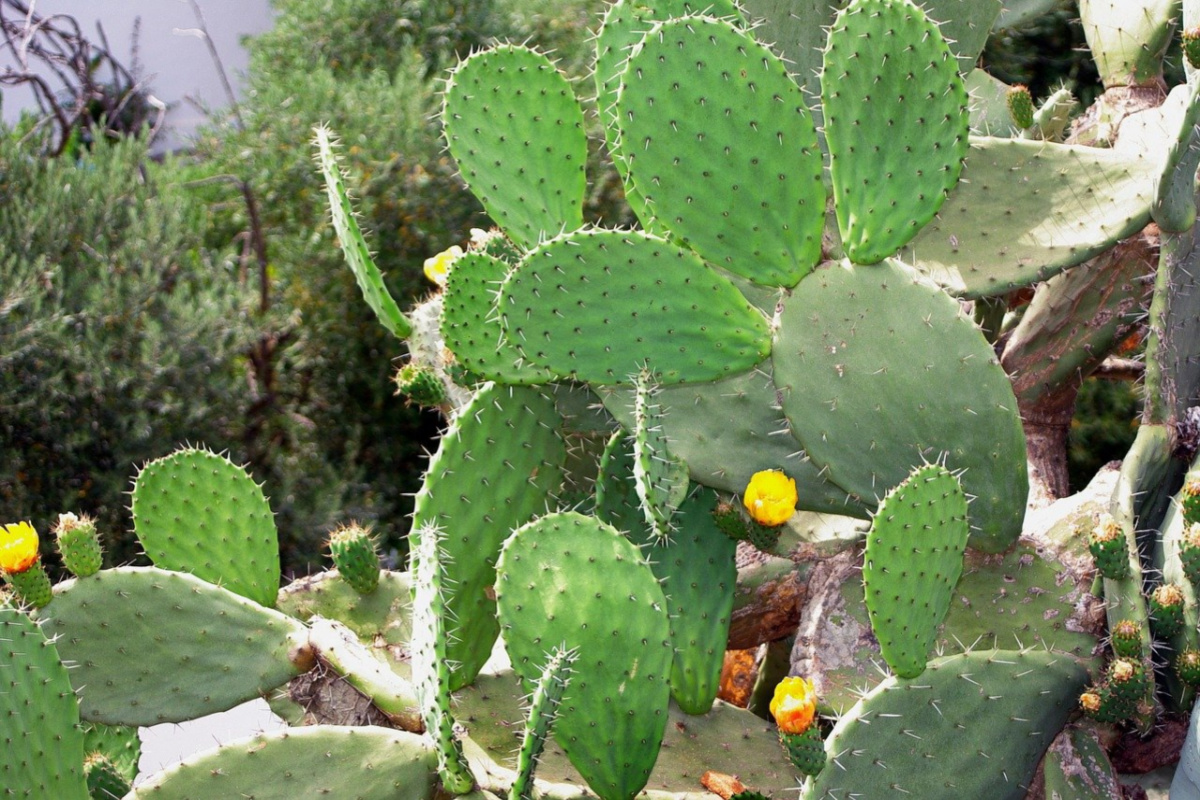 One particular example of a Greek herbal star is the prickly pear cactus (Opuntia ficus-indica), whose fruit can be harvested and enjoyed as a snack or in marmalade, or made into an alcoholic beverage. This cactus is not native to Greece but is believed to have been transplanted to the country by migrating birds who pooped out the seeds. The cactus can be found throughout Greece, especially in the Peloponnese region, Crete, and Ionian islands. It was known by the ancient Greeks, including the botanist Theophrastus (c. 370 – c. 287 BCE), who wrote about the cactus in his nine-volume textbook, Enquiry Into Plants. The plant’s Latin botanical name, Opuntia, is related to the ancient Greek city of Opus, where it commonly grew. The prickly pear cactus blooms with yellow and red flowers from late May to mid-summer and the fruits, which in Greece are known as frangosyka, are harvested from August to October. 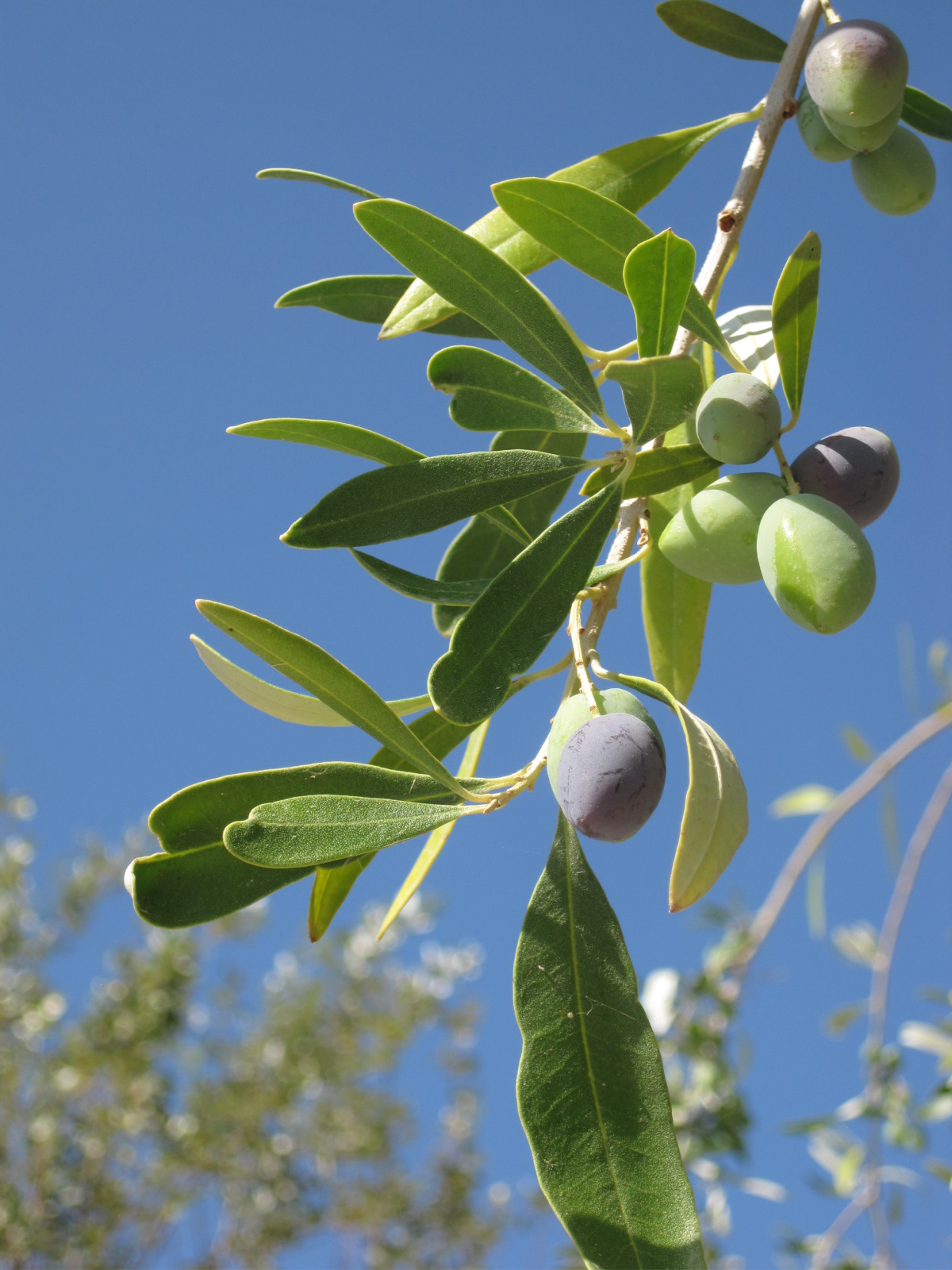 In the autumn and early winter, the olive tree (Olea europaea) is ripe with olives and the harvest season is a well-known shared cultural experience throughout the country. Farmers use special harvesting tools and set up nets to gather the olives, which are then pressed into olive oil or cured to make the fruit edible. Native to the Mediterranean region, the olive tree is a member of the family Oleaceae and thrives best in regions with rainy winters and hot, dry summers. The tree has silvery green leaves which can be infused as an herbal tea. It also bears small white flowers and has a strong root system that can thrive in either fertile or rocky soils. New trees may take up to 8 years before producing their first harvest, but after that, fruit is generally produced every other year for centuries. The wonder of this tree is its ability to live for thousands of years. The tree’s deep-ridged, wrinkly, twisted bark invokes an image of an elder embodying the wisdom of ancient philosophies. 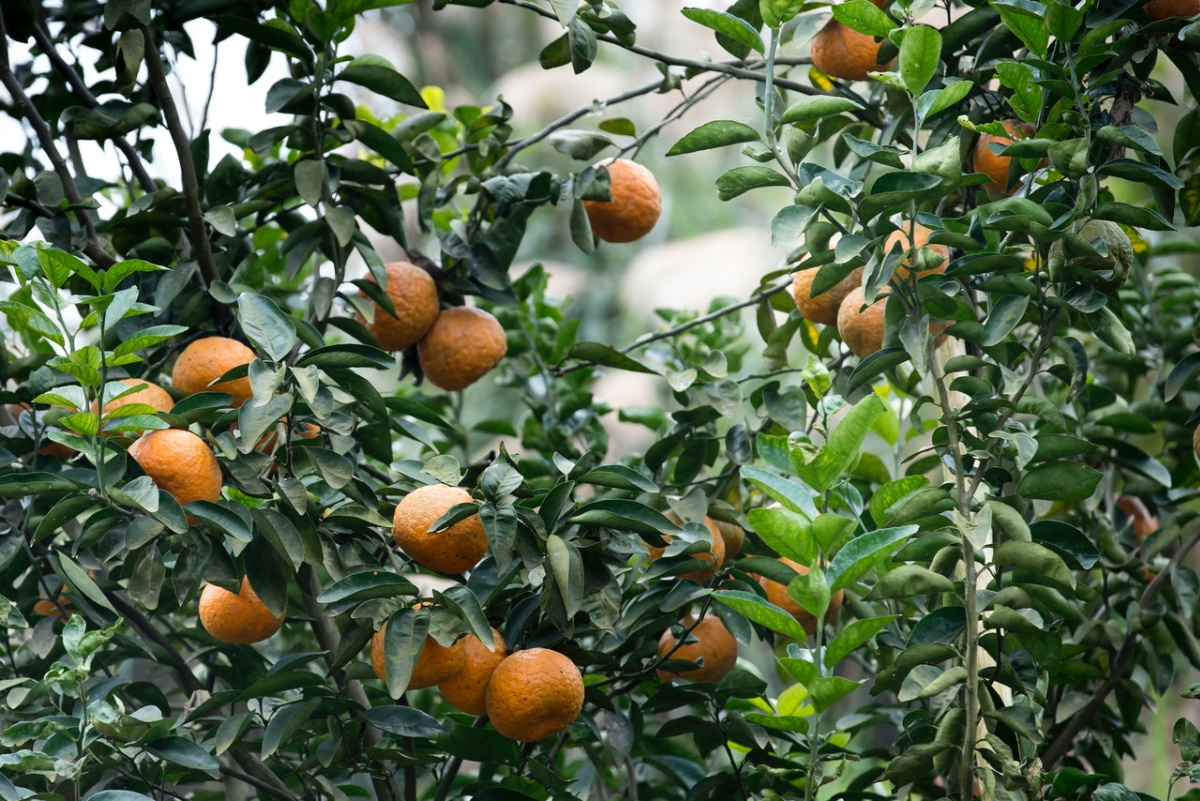 Herbal Wonders of Greece Through All Seasons

While the winter season in Greece is the least colorful of the seasons, it does not disappoint the herb-curious traveler. One particular phenomenon is the citrus trees that color the landscape with their dark green leaves and bright orange fruits, even in the heart of Athens where the trees often line (and litter!) the sidewalks. Fresh, juicy oranges can be found in local farmer’s markets that occur weekly in nearly every neighborhood in Athens. The fruits provide an abundance of vitamin C to keep the immune system strong during the cold, damp season. These trees thrive between November and February. There are several varieties of orange trees in Greece, most notably the bitter oranges (Citrus aurantium) on city streets. Although these fruits can’t be eaten because of their bitter taste, they are used to produce the neroli scent in perfumes and can be used in marinades.

Lastly, springtime in Greece is perhaps the most delightful, magical time of the year. The landscape is awash with bright colors from poppy (Papaver somniferum), calendula (Calendula arvensis), nettle (Urtica dioica), arugula (Eruca sativa), thyme (Thymus vulgaris), and other herbs and wildflowers that delight the senses. There is no better time to feast the eyes than during the months between the dreary winter and the unbearably hot summer. Greek calendula (Calendula arvensis), in particular, is an herbal wonder for its ability to alleviate the winter doldrums and brighten up the spirit. Compared to Calendula officinalis, which grows in the United States, the native Greek calendula has a smaller flowering head but a higher resin count, indicating a higher potency of herbal properties. Calendula can be used externally and internally, to support wound healing and as a lymphatic. These qualities are helpful in the springtime, especially to help ease stagnation in the mind and body accumulated during the winter.

Clearly, exploring the herbal wonders of Greece in any season offers a rich experience with many wonderful plant species. It is not surprising that ancient Greek philosophers and poets wrote so eloquently about the landscape of Greece, often describing the vibrant greens of the olive, pine, and oak trees and the reds, yellows, blues, and whites of the herbs and wildflowers of the land. There is an inherent beauty in witnessing the changes of flora every season and how the rhythms of nature unveil an equally stunning performance year after year.

The herbal wonders of Greece are a delight to experience throughout the year and across the different regions of the country. These plants provide a feast for the senses and can inspire us to explore, appreciate, and celebrate the diversity of nature herself. Within a land steeped in history, Greece offers a story for each timeless herb, flower, and tree. 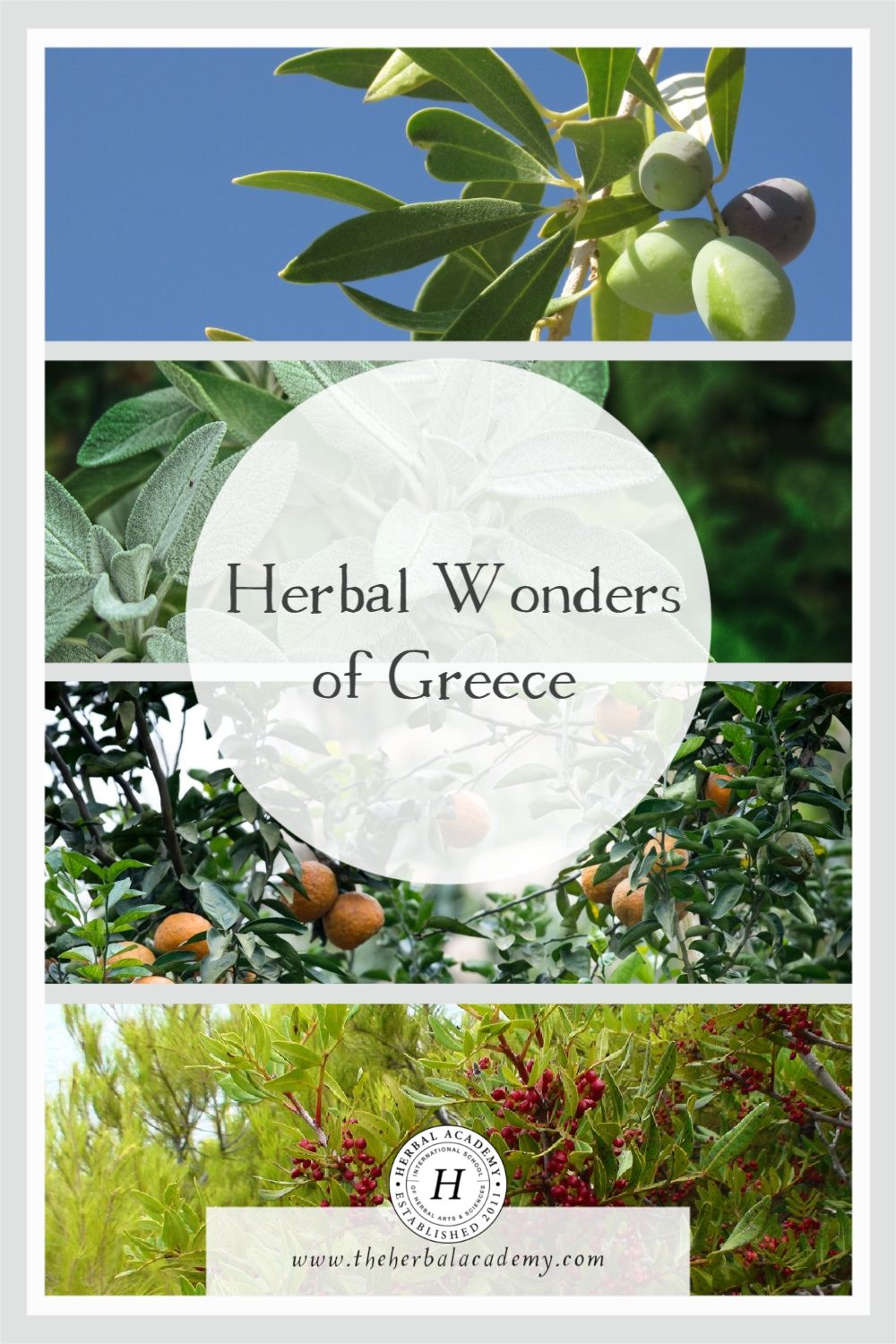