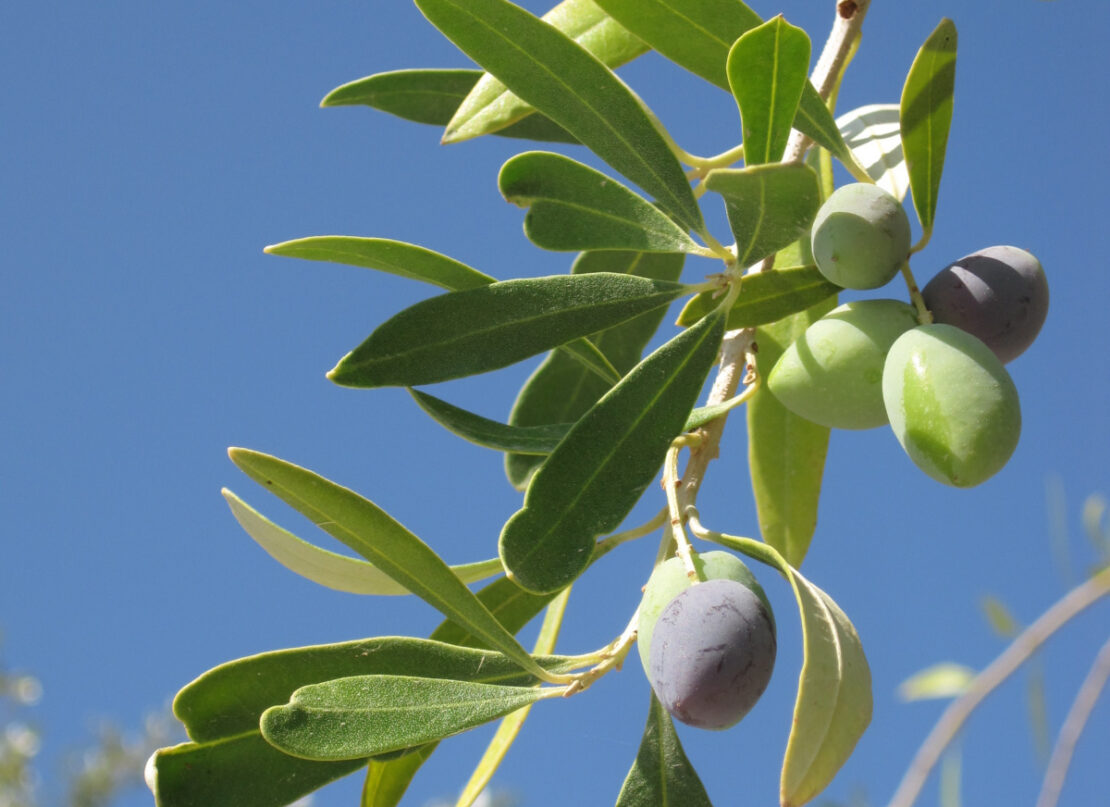 Olive oil has a rich and magical history in Greece, where the landscape is dotted with millions of majestic olive trees. Derived from the pressing of ripe olives picked from the Olea europaea tree, this supreme food has been used for thousands of years in the Mediterranean region, Asia, and Africa. The magic of Greek olive oil stems from a combination of rich cultural traditions, as well as its benefits and usages in both cuisine and herbalism. 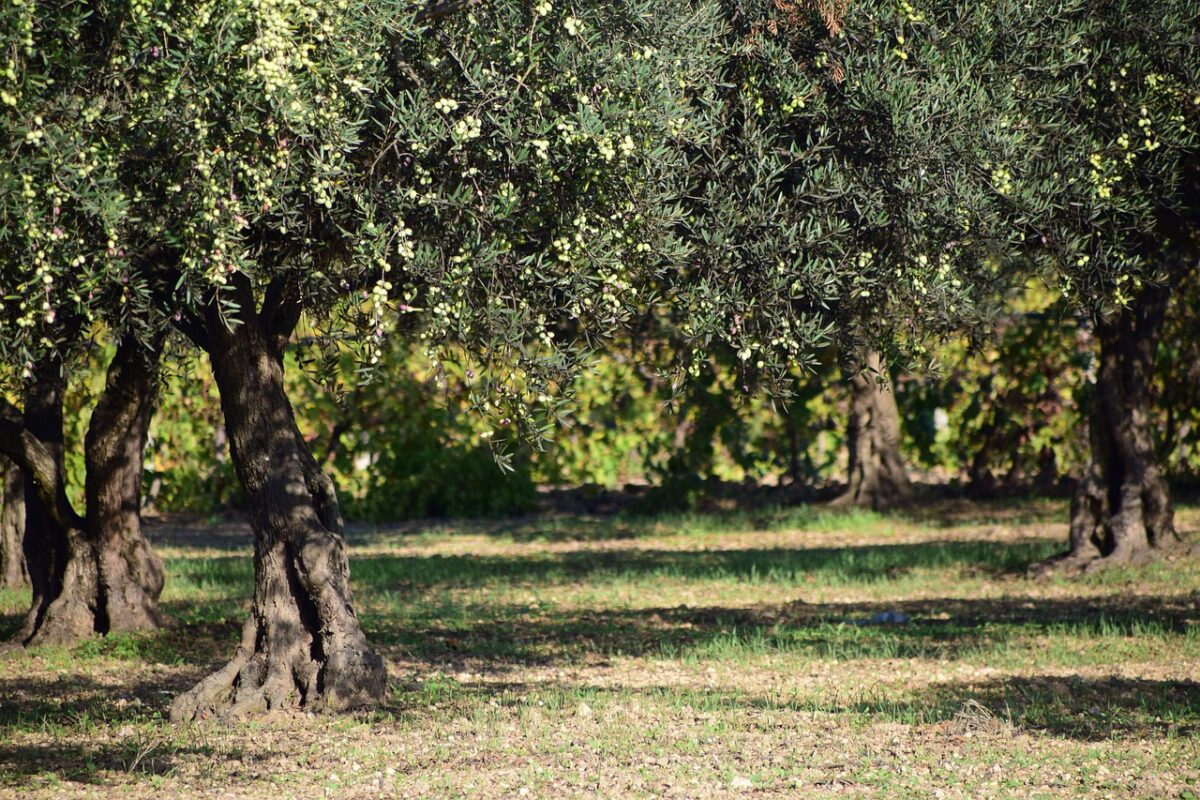 The olive tree is an evergreen and thrives in hot and dry climates. The tree has a unique gnarled and twisted trunk and does not typically grow taller than 50 feet. Impressively, the olive tree can live to be thousands of years old, and even in its old age can produce olives. One of the oldest olive trees in Greece, and possibly the world, is the olive tree of Vouves, located on the island of Crete and estimated to be between 2,000-4,000 years old (Rackham & Moody, 1996). In 1997, the tree was declared a protected natural monument, and an olive museum was built nearby.

The Greek landscape, with its arid and sunny climate, offers prime conditions for the success of the olive tree. Olive groves throughout Greece are often passed down to each generation as part of family inheritances. With each generation, the tree continues its legacy of providing a supreme source of nutrition, financial stability, and a connection to the historically rich land.

The history of olive trees stretches as far back as 7,000 years ago. In ancient Greece, the olive tree was associated with Athena, goddess of wisdom, courage, and strength. In a gift-giving competition against Poseidon, god of the seas, Athena won by sprouting the very first olive tree on the Acropolis (an olive tree still marks the spot there). As a result of her victory, she received the highest honor of becoming the patron goddess of Athens, the city bearing her name. Subsequently, the olive tree became a symbol of peace, prosperity, and wisdom.

In antiquity, as in modern times, olive oil has been a prominent feature of the Greek identity. It has been called “liquid gold” and “the great healer” for its versatile uses in cuisine, wellness, and body care (Clodoveo et al., 2014). Ancient physicians, including Hippocrates, Theophrastus, and Dioscorides, extolled its many benefits, including for digestive issues, oral care, skin conditions, and in dealing with sports injuries in combination with massage (Nomikos et al., 2010). Olive oil rubbed daily on the head was said to even discourage premature grey hair (Dioscorides et al., 2000, p. 35).

During ancient athletic competitions, athletes would coat their bodies with olive oil in hopes of infusing themselves with the strength of the goddess Athena. Winners of the Olympic games would receive large jugs of olive oil from sacred groves as their prizes, as well as victory crowns made of olive branches. Cosmetically, olive oil was the carrier oil for perfumes made with aromatic herbs, and archaeological evidence of small clay perfume bottles demonstrates its widespread use. In sacred settings, the oil was used as fuel for the holy lamps in temples and to anoint kings and victors. In modern religious rituals in the Greek Orthodox Christian Church, olive oil is used during baptisms and major holidays as the means for anointment. 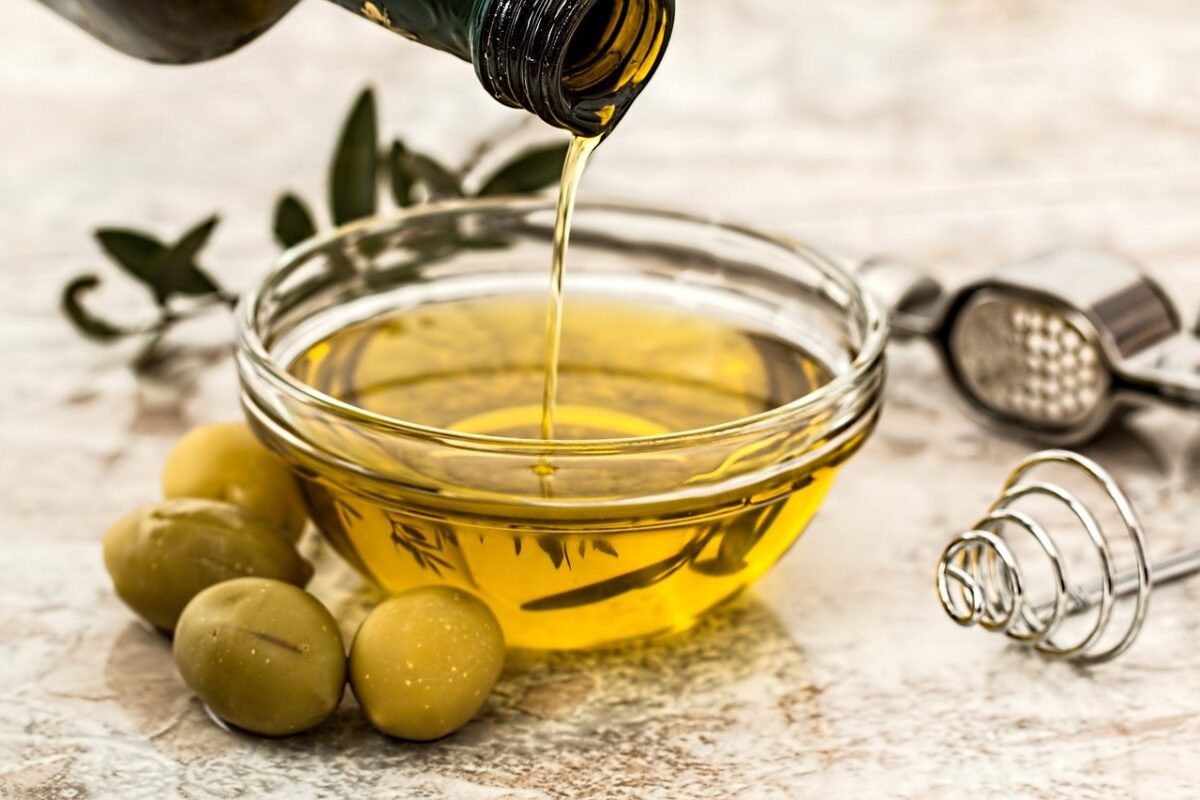 In the culinary setting, olive oil is a staple of the Mediterranean diet. On average, Greeks consume more than 10 liters of oil per year. This oil is considered a superfood and is generously poured over salads and vegetables and used in cooking.

While olive oil is ubiquitous in Greek culture, the process of making it requires hard labor, special equipment, and annual dedication. Throughout the Greek countryside between November and March, olives are harvested by hand, either using hand-held rods to shake the branches loose of their olives or mechanical shakers. The olives fall to the ground on a cloth that generously covers the ground below the tree and are gathered into heavy sacks.

On the very same day, the olives are brought to an olive press; the traditional method used granite wheels to press the olives, while modern presses are made from stainless steel. At the olive press, the olives are separated from their leaves, washed, and crushed to a pulp in a large mixer. Through centrifugal separation, the olive oil is extracted. For large productions, the oil is stored in stainless steel tanks at bottling facilities. After the oil has settled, usually for at least one month, the oil is processed through mechanical filtration to ensure its integrity. During pressing and storage, the temperature is always kept below 16 degrees Celsius to prevent a decline in quality. The final step is bottling and labeling it.

Today, there are approximately 140 million olive trees in Greece. The harvested olives produce approximately 300 million liters of olive oil annually, of which 190 million are exported, making Greece the world’s third biggest producer (Tagaris, 2021). Most of the olive oil produced in Greece (82%) is extra virgin olive oil (EVOO), which is the highest-ranking grade. Ninety percent of the olive oil produced on the island of Crete is EVOO. In recent years, Greek olive oil production has unfortunately declined due to higher temperatures and drastic weather shifts caused by climate change (Tagaris, 2021). 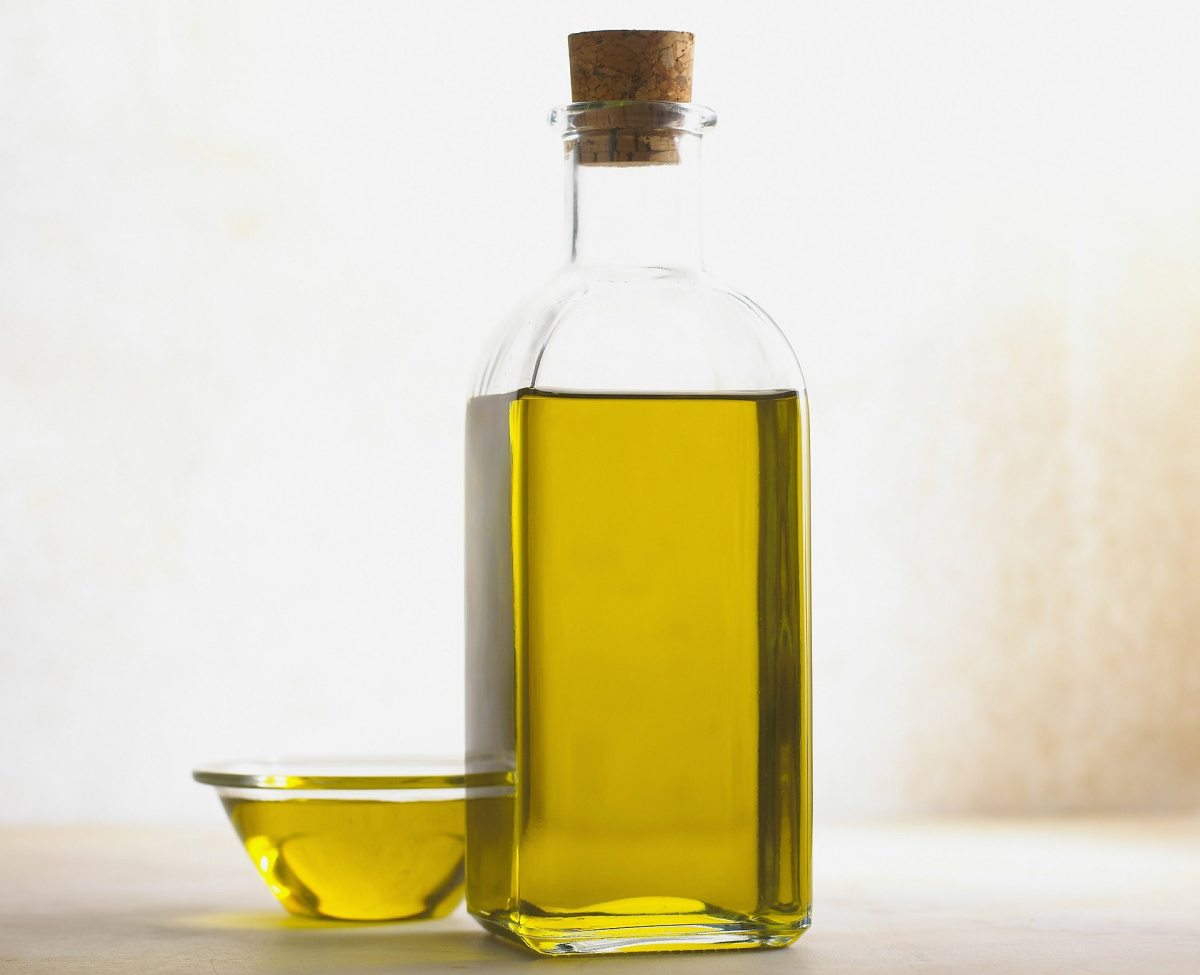 During an olive oil tasting, there may be several olive oils offered. There are six main varieties of olive oil in Greece, loosely based on region:

Koroneiki is considered the king variety, as it is most predominant. It is cultivated in Crete and the Peloponnese.
Fruitiness intensity: medium to robust
Bitterness & Pungency intensity: medium pungency greater than bitter tones
Aromas: fresh cut grass, tomato leaf, artichoke, green apple, almond

Fruitiness refers to the aroma and taste of the oil. It should be fresh and have an underlying fruity olive tone.

Bitterness refers to the polyphenols present in the olive oil. Generally, high amounts of polyphenols create high bitterness and pungency flavors. Polyphenols are an indicator of antioxidants that are vital for cardiovascular health. High levels of polyphenols also improve the shelf life of EVOOs.

Pungency is also derived from polyphenols. It is considered more of a sensation than a taste. More pungent oils generally contain higher levels of polyphenols. Pungency can be regarded as astringent and can have a peppery or similar definition.

When olive oil is not made well or is stored improperly, it can become rancid, fusty, musty, or muddy. These terms are defined as:

Rancidity and fustiness are the two most common problems with olive oil (Devarenne, 2010). Before consuming or making an herbal preparation, be sure to taste the oil to ensure its quality and flavor. Always be conscientious about the olive oil you choose!

Understanding the different kinds of olive oil can help with flavoring culinary dishes or making an herbal preparation. Each oil offers a different experience that is worthy of exploration. Most importantly, choosing EVOO and avoiding refined olive oils can help ensure the highest quality and most effective benefits for the body. Let’s explore these amazing benefits. 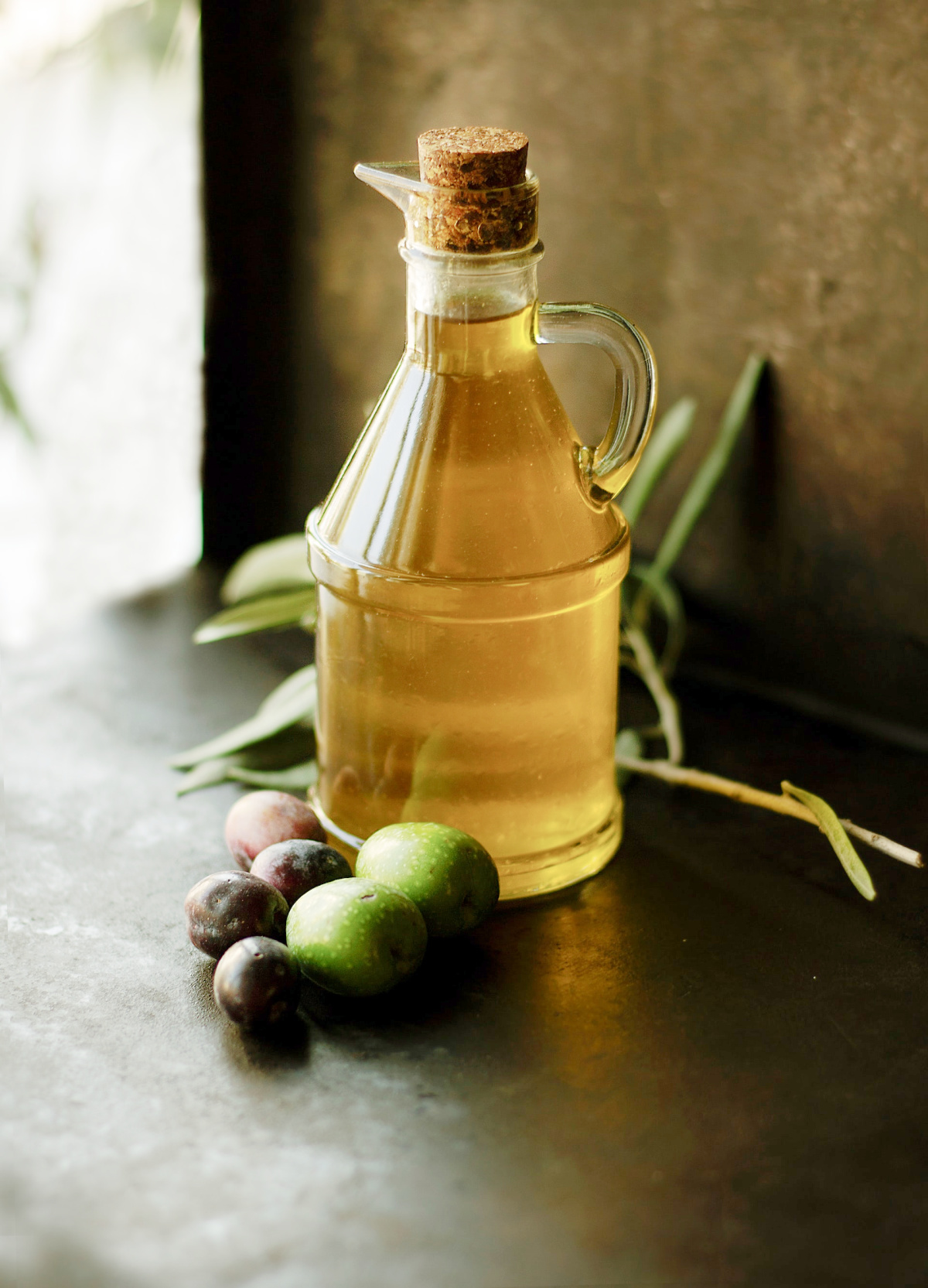 Extensive scientific research on olive oil has demonstrated many amazing health benefits. Polyphenols are shown to support wellness in the face of cardiovascular, neurodegenerative, and cancer diseases. The beneficial action of polyphenols as antioxidants helps eliminate free radicals in the body that cause detrimental inflammation (Gorzynik-Debicka, et al., 2018). There are several types of polyphenols, most notably oleuropein, which has been proven to have anti-atherogenic (discouraging formation of fatty deposits in the arteries), anti-inflammatory, anti-angiogenic (discouraging tumors from growing their own blood vessels), and anticancer properties (Gorzynik-Debicka, et al., 2018). EVOO contains the highest levels of polyphenols (approximately 500 mg/Kg), whereas common olive oil (typically a blend of several olive oils) and refined olive oil contain approximately 0-100 mg/Kg (Gorzynik-Debicka, et al., 2018). Additionally, olive oil has been studied for its ability to support the healthy function of the heart by lowering blood pressure and improving the function of blood vessels with promising results (Moreno-Luna, et al., 2012).

Olive oil also contains high levels of monounsaturated fatty acids, particularly oleic acid, which help maintain healthy cholesterol levels and lower LDL cholesterol (Parthasarathy, et al., 1990). Oleic acid is a type of omega-9 fatty acid that has been studied for its potential to reduce the risk of diabetes and support healthy insulin levels (Gavahian, 2019; Jurado-Ruiz, et al., 2019). This oil has also been studied for its ability to support a healthy gut microbiome and to improve the immune response in eliminating various pathogens, including bacteria, viruses, and fungi (Gavahian, 2019). Topically, olive oil has emollient and moisturizing properties that can benefit the skin and support healthy cell regeneration.

When using olive oil for its benefits or herbal purposes, there are multiple factors to consider:

Olive oil is a golden reflection of the land and the wisdom embodied in the long-living olive tree. It is a testament to the strength and dedication of people, who for thousands of years have cared for the trees and harvested their fruits. The magic of Greek olive oil lies in the sun-kissed land and long-lasting ideals of peace and prosperity that the goddess Athena is believed to have first bestowed upon them. The pronounced benefits of this high-quality oil are wide-ranging and have lasting effects on the body. In combination with herbal practices, this liquid gold can support the body in so many ways. 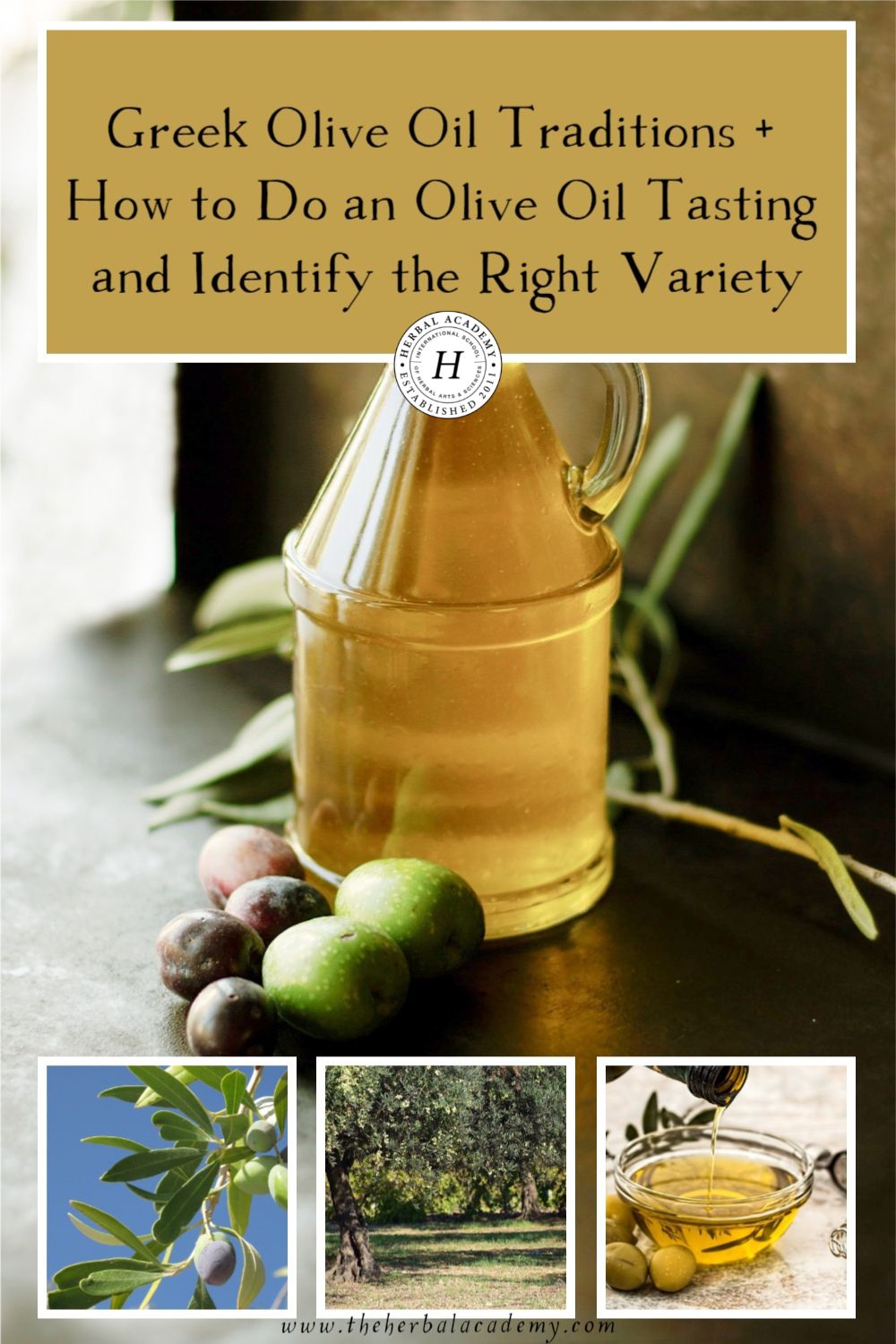 Dioscorides, P., Osbaldeston, T. A., & Wood, R. P. (2000). De materia medica: Being an herbal with many other medicinal materials: Written in Greek in the first century of the common era: A new indexed version in modern English. IBIDIS.