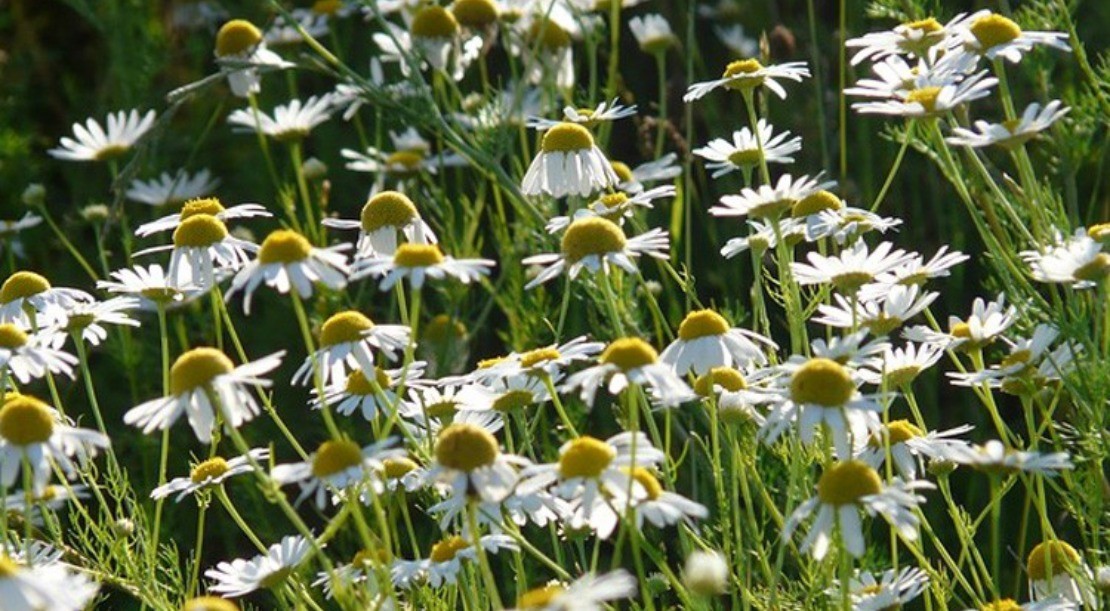 From the Astereraceae (daisy) family comes the Matricaria recutita (German chamomile) and Chamaemelum nobile (Roman chamomile). Both are known as chamomile, although North Americans tend to use the German chamomile plant, while those in the UK use more of the Roman variety. These two unrelated chamomile plants share many of the same constituents, have a similar appearance and aroma, and can be used interchangeably. Both prefer full sun or partial shade and only require moderate amounts of water. Sometimes called the “plant’s physician,” chamomile seems to help sickly plants growing around it.

German chamomile is an annual and is native to Eurasia. It is sown by seed in the spring after the last frost. It can grow up to three feet tall and will easily self-sow. The flower of Roman may be larger, but most people believe that German chamomile is sweeter than its Roman counterpart.

Roman chamomile is a low-growing perennial native to Europe and North Africa. In an old English adage, we learn that “the more it is trodden, the more it will spread.” In fact, Roman chamomile has sometimes been used in place of lawns. Roman chamomile’s name comes from Greek and means ground apple, so called because of its sweet aroma. It is primarily spread by root runners, and is best propagated by root division in the fall or spring. Seed propagation is possible, but the viability of the seed is usually only about 50%.

For purposes of this article, I’m referring to both types of chamomile.

Harvesting chamomile can be tedious work, since it’s the flower (not the stems or leaves) that contains the plant’s active constituents. After harvest, dry it as quickly as possible and keep it out of the sun, which can harm its aromatics. Put the dried flowers in air tight containers as soon as possible, since they tend to reabsorb moisture in the air. (Check the forecast before harvesting!) Chamomile can also be picked up in dried form here.

Chamomile’s energetics are as follows:

Do you remember the tale of Peter Rabbit? Written by Beatrix Potter in the early 1900’s, the story centers around a naughty rabbit who eats his way through Farmer McGregor’s vegetable garden. One day, Mr. McGregor chases him from the garden, leaving Peter traumatized.  To soothe Peter’s frayed nerves, his mother puts him to bed with a nice warm cup of chamomile tea.

Long before this, the Egyptians believing the flower had the appearance of the sun and its rays, dedicated chamomile to their sun god, Ra.

The ancient Germanic warrier god, Woden (Nordic Odin) was the god of learning, poetry, and magic. It was believed that Woden gave chamomile to the people as a medicine, along with eight other plants that became known as the Nine Sacred Herbs of the Anglo-Saxons.

An old German legend tells us that chamomile flowers represent the souls of ill-fated soldiers who died under a curse for the sins they committed during their lives.

During the Middle Ages, chamomile wreathes were hung on the doors on St. John the Baptist day (June 24th) to protect homes against lightning.

On Midsummers Eve, great bonfires were lit at crossroads or in fields and aromatics, including chamomile, were added. The thick smoke that resulted was believed to have magical powers. People suffering from illnesses were brought to the fires to inhale the smoke. It was also fanned to fields and orchards to produce a stronger and more plentiful crop.

In Wales, chamomile was planted on graves to ensure happy souls in the afterlife. Gamblers would bath in or wash their hands with chamomile hoping it would bring them that big win!  It was also believed spells and hexes would be broken when chamomile was sprinkled around the house. This helps to explains why chamomile was often used as a strewing herb.

In the language of flowers, chamomile means patience in adversity.

Chamomile is another plant with many uses and a long history of documented use. While it is commonly used to relief stress (more on that here) and insomnia, chamomile has been utilized in many other ways through the ages:

The Egyptians believed it had so many uses that they considered it a universal remedy!

Dioscorides and Galen used it for bladder, kidney, and liver disorders.

Hildegard of Bingen gave it to ease female problems and for relieving intestinal diseases.

Culpepper felt it was useful to “taketh away weariness, easeth pains to what part of the body soever they be applied.”

Egyptian women used chamomile in their cosmetics. A weak tea was used as a skin rinse, especially in bad weather. Tea bags over the eyes (or a chamomile poultice) would reduce puffiness and redness. Viking blondes, and many since, have used a strong infusion to bring out the highlights in their hair.

Ways to Use Chamomile

Versatile chamomile has many uses in many forms!

An infusion is the most common way to use chamomile. How many of us have enjoyed cup of chamomile tea before bedtime or when stressed? (Don’t boil the water when making tea, or the aromatics can be destroyed.) If you’re using chamomile for stress, a mild tea should suffice. A stronger version would be used for sleep. If you steep chamomile too long, however, the tea may become bitter, so taste it first before drinking it.

Tinctures are also a common way to use chamomile. Learn how to make tinctures here. One of the benefits of tinctures is their long shelf life.

Be sure to crush your chamomile flowers before making your syrup and strain it well.

A chamomile poultice can be used for toothaches and to help reduce swelling, inflammation, and pain. Use a chamomile compress for headaches, boils, and backaches.

A chamomile lotion or salve is excellent for burns, eczema, psoriasis, or inflamed and itchy skin.

Other Ways to Use Chamomile

Use chamomile for steam inhalations to relief hay fever and sinus problems, as an oil to ease sore or achy muscles and joints, or as a mouthwash. When used with hops and lavender, chamomile can be used to make a dream pillow, or put it in a bath to relieve arthritis pain. Get inspired by these bath recipes and try throwing in some Epsom salts for added relief.

Up to 10% of the population may be allergic to chamomile, especially those with a known ragweed allergy. It seems that more people have reactions to Roman chamomile than to German chamomile.

If you are pregnant or nursing, check with your health care provider prior to using chamomile.

Chamomile contains courmarin, which is a natural blood thinner. Check with your health care provider if you are on any type of blood thinner, especially warfarin.

Too much chamomile can cause vomiting.

Want to learn more? Look for an upcoming article where I’ll provide specific recipes and tips for using chamomile. Or, join us in The Herbarium membership, where you can get exclusive access to our extensive herbal database.