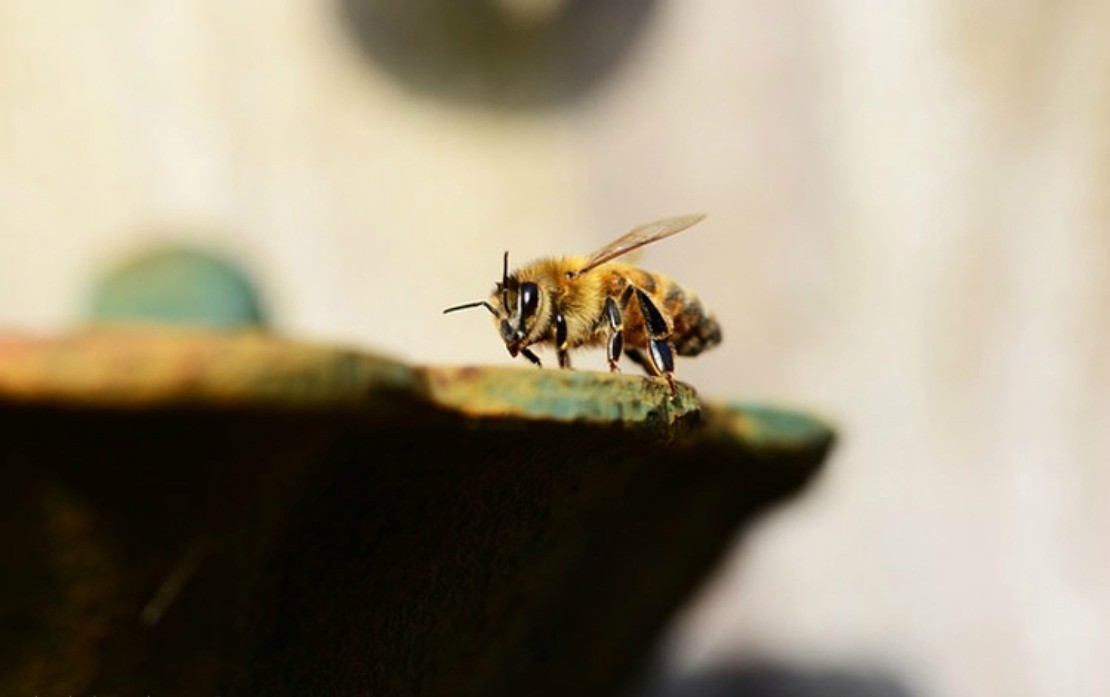 I love honey bees! I love to work around them, talk about them and observe their behavior. When it was suggested I come up with five fun and fascinating facts about honey bees to share in this post, I mentally started clicking off my internal list. As an all around honey bee enthusiast, it was mighty hard to narrow my list to just five. And, I might have fudged a bit. So here we go, my top five fun facts about bees.

They live within an organized societal structure that involves subsequent generations, they cooperate in raising and caring for brood, and they fairly divide up labor. Sort of like a bee utopia, so to speak. There is only one Queen Bee per hive and she will lay up to 2000 eggs per day ensuring the longevity of the hive. The hive will care and feed her Royal Jelly for the rest of her productive life. The queen has an average lifespan of 3-5 years and the hive will replace an ailing or aging queen with a process called supersedure. When necessary, the worker bees can raise another queen by feeding royal jelly to stimulate ovary production in the young worker bee. Once the chosen female emerges, she will kill the older queen and go on about the business of laying eggs and ensuring subsequent generations.

2. From the time the young bee emerges from its cell, its life is structured and its days are numbered.

The young bee’s first duty is to clean out the birth cell in preparation for the next generation of brood. Days 3-11 are filled with the duties involved in caring and tending to brood. Days 12-17 are devoted to wax production and the repairing of cells and building of comb to facilitate the storage of honey and pollen. At day 18, the young bee is promoted to guard duty and on day 21 becomes a full-fledged forager. The average lifespan of the worker bee is just six weeks. And as you can see, they literally work themselves to death.

In order to produce just one pound of honey, the average hive will fly over 55,000 miles and visit over 2 million flowers. The average worker bee will only produce 1/12th of a teaspoon of honey in its lifetime.

4. Population is essential to survival, especially in winter.

The hive is kept at an internal temperature of 96 degrees to ensure brood survival. In the summer, bees fan their wings in order to maintain airflow and lower the moisture content to adequately cap honey. In the winter, brood production is greatly diminished and bees will cluster or ball in order to maintain hive temperature. Bees will not defecate within the hive which is why on a sunny winter day, they will venture out for a cleansing flight. For even more tips for helping the honeybees, visit this post.

5. Honey is one of the world’s oldest foods and literally has no expiration date.

The oldest honey was found in the Republic of Georgia and was estimated to be over 5000 years old. And guess what, it was still edible. That is because honey is hygroscopic, containing very little moisture or bacteria. Through the process of fanning, the worker bees will lower the moisture content within the packed honey cells to 14-18% When the adequate humidity level is reached, the honey will be capped with a protective wax coating which preserves the honey indefinitely. All honey contains a natural enzyme which when broken down is a precursor to hydrogen peroxide. This enzyme protects and prevents the growth of bacteria making raw honey a powerful healing agent. And plus, it taste delicious! Bonus Fact. Over 80% of our fruits, vegetables and nuts are pollinated by a Honey Bee. Think about that the next time you are at the grocery store or local farmers’s market. So, there you have it, five fun and fascinating facts about Honey Bees. Support your local beekeepers by buying raw, natural honey. You’ll be glad you did! Bee-the-Change!   Rebecca O’Bea is a beekeeper and avid gardener from Kansas. A budding herbalist and student at HANE, she can be found most days knee-deep in compost and blogging about her daily life at The Bee Queen.