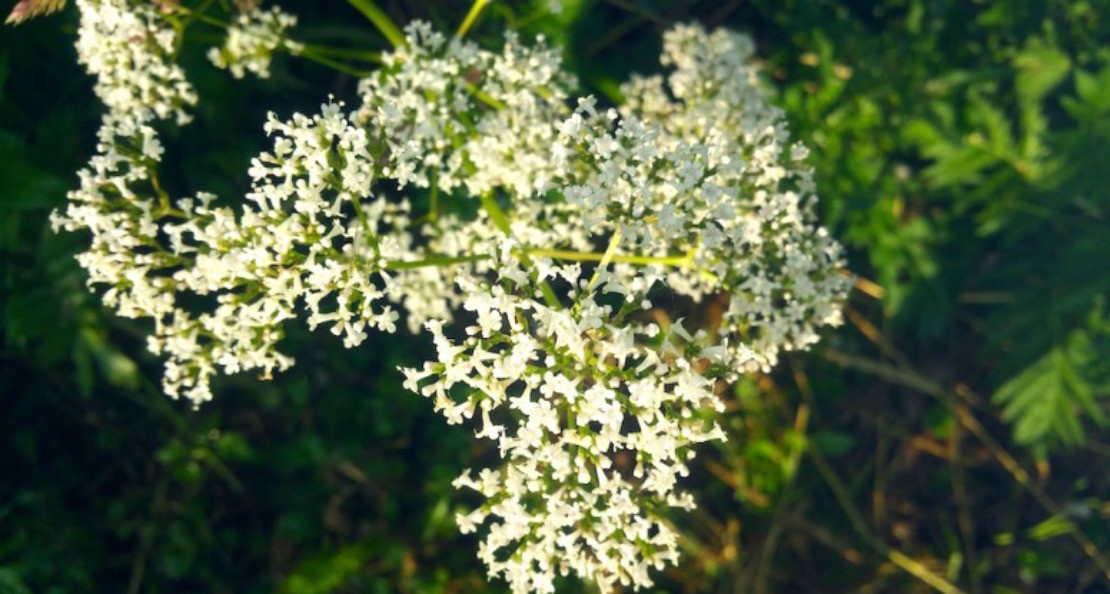 In my last article, I wrote about the lovely aroma of elder flowers.

Valerian (Valeriana officinalis) is on the other end of the fragrance spectrum. Although some people like the smell of valerian (I’m one of them), many say that it reminds them of  “dirty sweat socks.” Dioscorides and Galen must have felt the same way, since they referred to valerian as “Phu.”

Other common names for valerian include: garden valerian, all-heal, cut-finger, and garden heliotrope. (Valerian is in the Valerianaceae family, not the Heliotrope family.) The name comes from the Latin “valere,” meaning to be strong or to be healthy.

Valerian is a perennial to zone 4, and prefers sun or partial shade. There are more than 200 varieties, which grow in Britain, Northern Europe, China, and South and North America. This article focuses on V. officinalis, which is likely a native of Britain and Northern Europe, including Scandinavia.

The plant can reach five or six feet tall, has opposite compound leaves with seven to ten leaflet pairs. The stem is hollow, and the flowers are small and pinkish/white with a sweet smell.

You can easily propagate valerian by root divisions in the spring or fall, but it often escapes from the garden and will self-seed with abandon. Some years, I’d put it on the invasive list! (I’ve often wondered if you can call a plant that you love “invasive.”)

I like to harvest valerian on warm fall day, after the first frost. The parts used include the root and the rhizomes. Dig plants that are at least two years old in the spring or fall. Be careful not to damage the roots as you dig. Some folks believe that the stronger the smell, the stronger the constituents of the plant, and by damaging the roots, the aromatics may be compromised. To get more root production, deadhead the flowers during the summer.  Cats love valerian, so you can expect every feline in close proximity to join you during your harvest. When you clean the roots, take care not to rub, scrub, or scrape them to avoid damage. This is tricky, but it can be done.

Valerian makes a great garden plant. It seems to help nearby plants by stimulating phosphorus and earthworm activity. A decoction made from the roots and sprayed on the ground will attract earthworms. The mineral-filled leaves can be added to your compost, too. Most of us have heard the tale of the Pied Piper of Hamelin, Germany who played his flute and led the rats out of town forever. Many feel the Pied Piper must have been familiar with valerian and put it in his pockets or rubbed himself with it. Rats love the smell, and it may have been the valerian, not the music, that enticed the rats to follow him!

The Nordic goddess Hertha is said to have used valerian as a whip to encourage the stag she rode to greater speeds!  (The stag’s bridle was said to be made of hops.)

In magic, it was used in love potions, and in sleep pillows. If worn by a woman, it is said that men would “follow like children.”

Some people claimed that if valerian was thrown where people (especially a couple) were fighting, they would cease immediately! It is also claimed to tame the wildest of beasts.

The ancients Greeks would hang bundles of valerian in their homes, especially in their windows, to keep evil entities from entering. The Celts believed hanging it their homes would keep lightening from striking.

In the wizard world of Harry Potter, valerian was believed to have soporific qualities and was given in teas to encourage sleep.

It was generally regarded as a feminine element. Its powers were believed to be love, sleep, purification, and protection.

Where do the magic sleep potions end and the tincturing begin?

In Germany, valerian is used in more than 100 over-the-counter tranquilizers and is the number one nonprescription sedative in Europe.

When most people think of valerian, the first thing they often think of is sleep – for falling asleep, a good night’s sleep, and for waking without the usual grogginess of other sleep aids. It is one of the best gentlest ways to find sleep when used properly.

A long time ago, someone told me a good herbalist not only knows twenty herbs, but also knows twenty uses for one herb. Valerian would an herb with many uses.

In addition to a sleep aid, valerian has been used for anxiety, stress, to treat addictions, convulsions, gas, pain, hyperactivity, intestinal cramping, migraines, aggression, nervous exhaustion, coughs, epilepsy,  and the flu. And the list goes on and on. This plant has more than 2000 years of documented use!

How to Use Valerian

The easiest way to prepare valerian is by decocting the root and sipping the tea as needed. I was taught not to boil the root, but to “simmer it hard.” You can pick up dried valerian here.

Tincturing with fresh valerian root is best, but dried valerian will also work when the fresh root is not available.

Just a note here on alcohol for tincturing: Historically, vodka was made from potatoes, brandy from grapes/fruits, and gin from juniper berries. Take some time and read the labels; many of our old standbys are now made from grains, and many of the grains in the U.S. are GMO grains. If you are gluten intolerant or have allergies, this could present a problem. GMOs are banned in Sweden; therefore, I have chosen to tincture using alcohols from Sweden or use an expensive U.S. brandy. You can read more about making tinctures here.

For the past few years, I have experimented with tincturing fresh valerian flowers, a gentler approach for addressing anxiety. The tincture, if made using clear alcohol, turns a lovely golden color. I also tincture the root in a vegetable glycerin at about a 75% glycerin and 25% water for families who chose not to consume alcohol. (Keep an eye on the shelf life of glycerin tinctures.)

Baths and foot soaks were more popular a hundred years ago, but they appear to be making a comeback. Valerian baths were particularly popular among those suffering from rheumatic pain. To make a valerian bath, I put the herb in an old sock and toss it in the tub.

In my foot soaks, I usually add a bag of marbles, including a few “shooters.” Rubbing your feet over the marbles hits many of your reflexology points. In addition to the valerian, I generally add some mint for circulation and a teaspoon or so of ground yellow mustard, since I feel it helps to open the pores. Put all of  this in a basin that holds both of your feet, and add water as warm as you can tolerate. Sit and relax until the water is no longer comfortable. Have a towel handy to dry off your feet. Historically, ointments and salves were used for skin problems, rashes, bruising, and for sore muscles. Personally, I like to use a valerian salve on my feet, a gentle relaxant that helps me sleep.

A poultice made from the root has been known to draw out splinters. You can read more about making poultices using dried and fresh herbs here.

Valerian is also available in capsule form, alone or with other similar herbs.

Compresses of a heavy decoction or tincture, were used to relax cramping.

Remember one of the common names for valerian is cut finger? Our ancestors would make a wash from the root and use it to clean out wounds.

Cautions –  Valerian should only be used for two to three weeks, followed by a break of the same duration. Continual use can cause depression and headaches in some people. Another caution: In a small percentage of the population, valerian has the opposite effect – it can cause agitation, giddiness, restlessness, and sleeplessness. Just be aware, in case you’re one of the approximately 5 – 7%. Avoid using valerian with small children, and for those over 65, start with very small amounts.

In the middle ages, valerian was used as a condiment and was considered a staple food. It was regularly added to soups and stews, and the dried root was made into flour. The young leaves were eaten in early spring. I don’t know of anyone who considers the plant as food now, but it is available in a survival situation.

Believe it or not, valerian has been used in perfume!  A decoction of the root was also used for facials.

Valerian has a high calcium content and is also high in selenium, tin, aluminum, chromium, iron, and magnesium.

Valerian has been used for horses in colic, for nervous horses, moody mares (as a decoction), and in a salve for bruising. If you want to try using valerian for your horses, observe the following cautions: