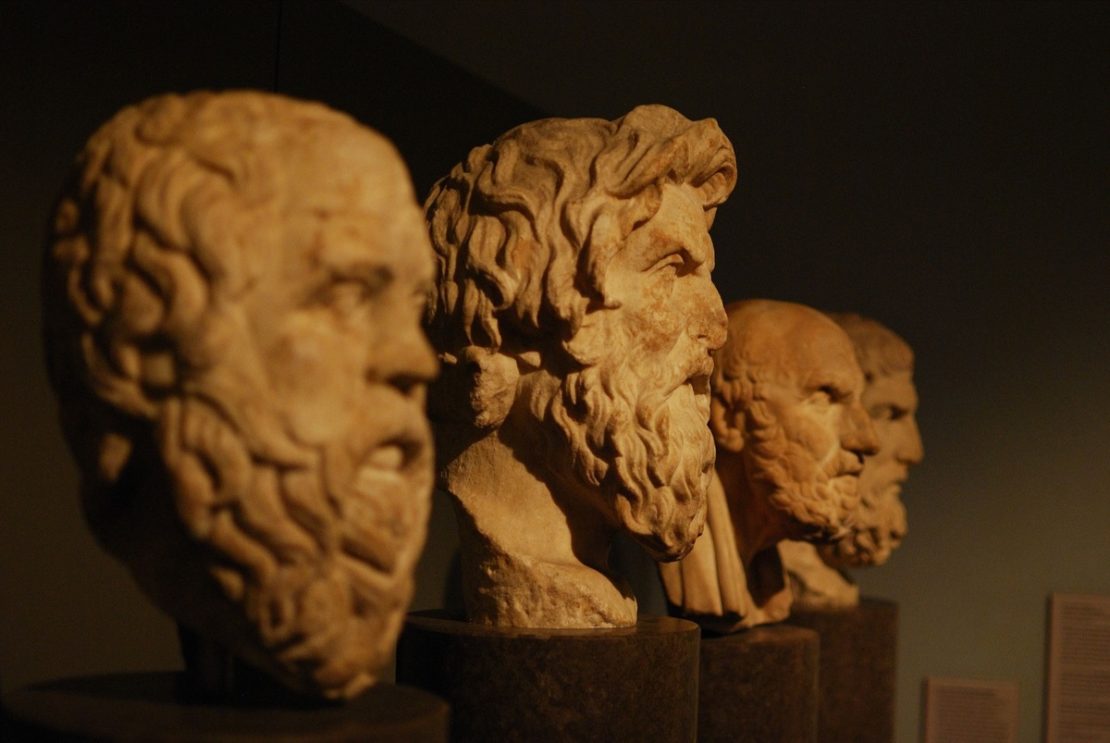 Herbalism is an ancient practice with thousands of years of historical applications. Today, the well-recognized ancient traditions of Ayurveda and Traditional Chinese Medicine remain instrumental as effective herbal practices. Equally important is understanding and recognizing the contributions of ancient Greek herbalism, namely the four humours. Although these concepts are no longer mainstream theories, they continue to provide an underlying foundation to modern medical and herbal practices.

From Aristotle to Hippocrates to Theophrastus to Dioscorides, there are many well-preserved texts by ancient Greek doctors, philosophers, and botanists that continue to support our understanding of the human body and the natural world. Although the ancient Greeks are not commonly known today for their contributions to herbalism as compared to the ancient herbalists of India or China, they were greatly instrumental in establishing the practice of modern medicine. Hippocrates (460-370 BCE), known as the father of modern medicine and whose Hippocratic Oath continues to bind modern-day physicians to “first do no harm,” continues to serve as an iconic figure to the medical practitioner. 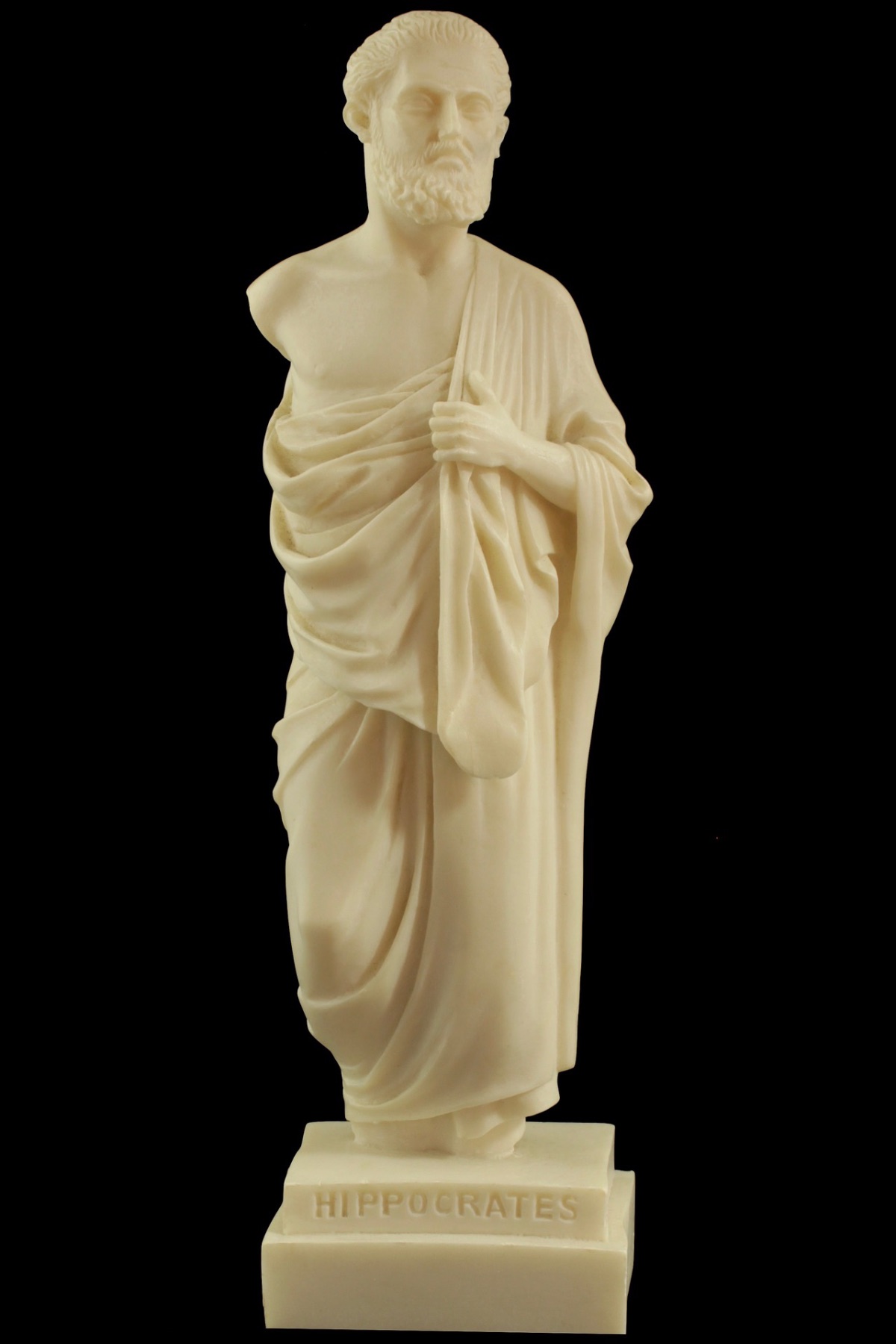 Unbeknownst to many, Hippocrates was also instrumental in developing the theory of the four humours: blood, phlegm, yellow bile, and black bile. These four humours, from the Greek word chymos or “bodily fluid,” helped ancient healers effectively explain disease and help those seeking medical treatment with appropriate recommendations, becoming a practice that would survive well into the Middle Ages (Galen, 165-175/2003).

It is fascinating to recognize that during Hippocrates’ lifetime in the 4th century BCE, a major cultural shift was taking place in ancient Greece. Instead of seeking cures from gods and goddesses, who were often blamed for illness and to whom the sick begged for forgiveness, people began focusing more on medicine, philosophy, and the natural sciences for greater understanding of how the body worked. Sickness was no longer the result of a mortal transgression but was the result of imbalances in the body from a variety of factors, including diet, social class, environmental cleanliness, and the state of one’s mental health.

Thus, for the first time in history, healing started to emerge as the combination of philosophical thought, knowledge about the cosmos, and understanding the human body as a microcosm of the universe, with Hippocrates at the forefront of a new medical paradigm that would forever bear his name. The immortal gods were gradually replaced with scientific medical theories, including the four humours, all of which heavily relied on the power of plants (Porter, 1997).

Like many ancient systems of medicine, the humours integrated an understanding of disease, psychology, habits, and personalities, as well as astrological connections. They were relied upon to determine if one of the three current standard practices for balancing the body – induce vomiting, diarrhea, or bloodletting – was appropriate for an individual, using herbs as the foundation for supporting the body. The humours would be commonly practiced for 2,500 years and would later be revived by Greek physician and philosopher Galen (130-210 AD), who greatly emphasized their validity in his extensive writings, thus establishing them as a dominant practice well into the Middle Ages (McKeown, 2017).

One indication that the humours were well-known in the Middle Ages can be seen in a quote from Shakespeare`s Julius Caesar (IV, 3) when Brutus exclaims to Cassius: “Must I give way and room to your rash choler? Shall I be frighted when a madman stares?” (Arikha, 2007). Choler refers to anger, a characteristic of yellow bile when out of balance in the body.

How The Four Humours Relate to Herbalism 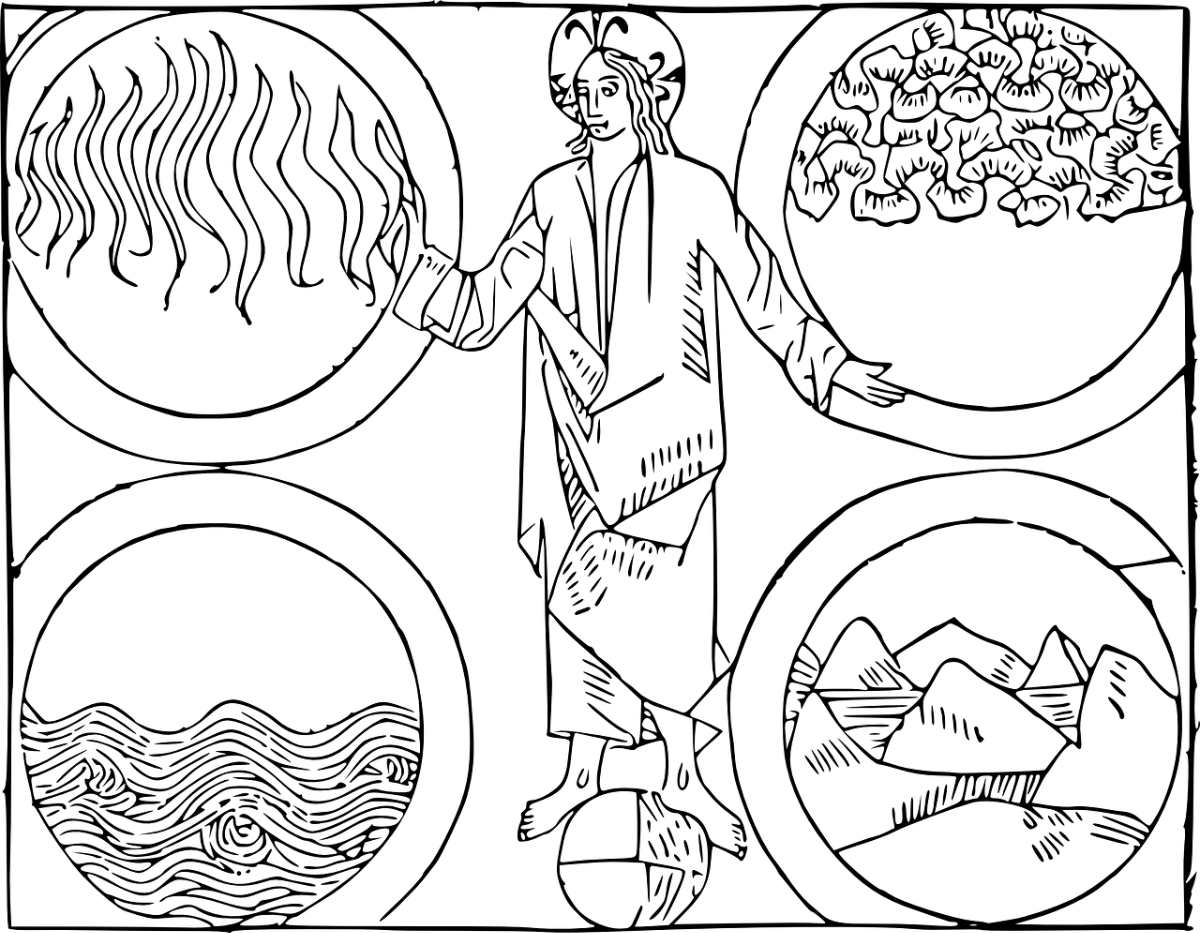 As with the ancient herbalism practices of China and India, the four humours are best understood, not through the lens of tangible modern explanations, but through the combination of recognizing invisible characteristics. These characteristics include energetics, elements, and temperament, as well as understanding the complexity of the natural world. Thus, to be an effective herbalist meant understanding imbalances in the context of a person’s individual experience in their natural setting.

Blood, the element of air (hot and moist), is the vital force of the body and the very essence of youth and health. Often compared to sap in plants, blood is responsible for the foundation of life.

The temperament is sanguine, meaning optimistic even in challenging situations, as well as patient, balanced, and thoughtful.

This is the humour of regeneration and is supported by herbs that are either cooling and drying to help regulate blood, such as agrimony (Agrimonia spp.), stinging nettle (Urtica dioicia), and yarrow (Achillea Millefoliium), or herbs that are warming and moistening to nourish and increase blood flow, such as linden (Tilia), chamomile (Matricaria chamomilla), and hawthorn (Crataegus spp.).

Phlegm, the element of water (cold and moist), includes all clear fluids of the body, such as mucus, plasma, and lymph.

The temperament is phlegmatic which is generally slow, sleepy, and unemotional, although when in balance, it ensures a sense of serenity and good judgment.

Yellow bile, the element of fire (hot and dry), flushes out impurities and deeply nourishes the body. It reflects the principle of digestion and transformation.

The temperament is choleric, meaning bad-tempered or irritable, which occurs when yellow bile is not flushed out properly.

Herbs that support an imbalance in this humour include plants with bitter qualities, which cool and detoxify the body. Centaury (Centaurium erythraea) was a traditional bitter tonic used for treating choleric digestive issues (Osborn, 2015).

Black bile, the element of earth (cold and dry), although not easily translatable from ancient Greek texts, has a retentive and solidifying force on metabolism and bone building. It can be expressed as the dried blood found in stool, very dark urine, serious fevers caused by malaria, or, more abstractly, as constipation, bloating, and arthritis.

The temperament is melancholy from έλας / melas, “black” and χολή / kholé, “bile,” or the feeling of pensive sadness (Liddell et al., 1940).

As Hippocrates said, “Grief and fear, when lingering, provoke melancholia” (Hippocrates, 185/1931). Nervine, carminative, and antispasmodic herbs, including lemon balm (Melissa officinalis), rosemary (Rosmarinus officinalis), and lavender (Lavandula officinalis) balance these conditions. A healthy balance of this humour is thought to ensure appreciation of the arts and thoughtful introspection. 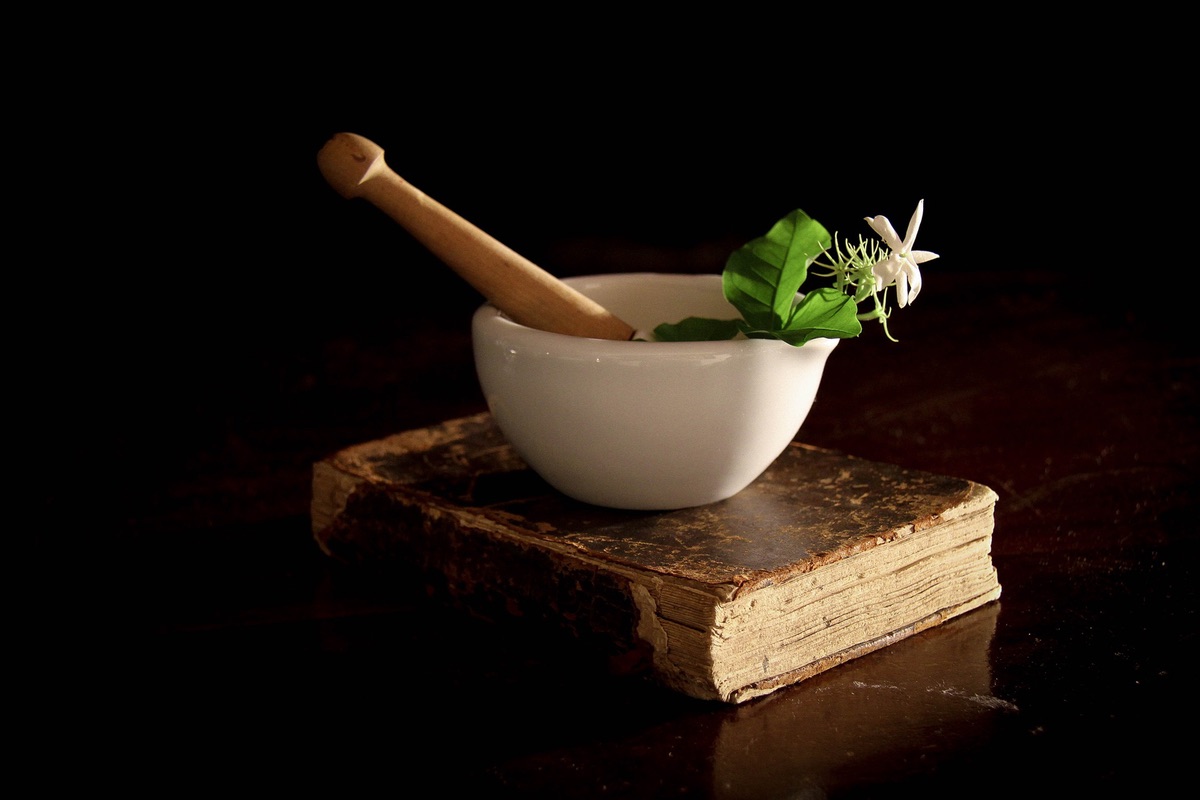 How To Apply the Four Humours to Modern Herbalism

Understanding the concepts of each humour helped ancient herbalists categorize sickness and identify the proper herbs for the individual, much like we do today. A visualization of the characteristics of each of the humours demonstrates its complexity:

These characterizations of conditions and temperaments resemble the Ayurvedic doshas of pitta, vata, and kapha, which some scholars suggest were influenced by the theory of humours (Osborn, 2015). Similarly, the four humours loosely correspond to the wheel of Traditional Chinese Medicine.

Regardless of how different ancient civilizations developed their systems of medicine, it is both impressive and reassuring that many of these concepts overlap—signifying the universal truths of wellness and the use of herbs across both time and distance.

Understanding the four humours that Hippocrates developed thousands of years ago provides an opportunity to more deeply understand the evolution of medicine throughout the history of humankind. Whether we have ancestors from ancient Greece, China, or India doesn’t matter so much. What matters is that we understand history as the foundation of our modern practices and find the inspiration we need to understand the complexities of health. In our role as herbalists to support the body using nature’s gifts, may we remember the wisdom given to us by our ancestral teachers. 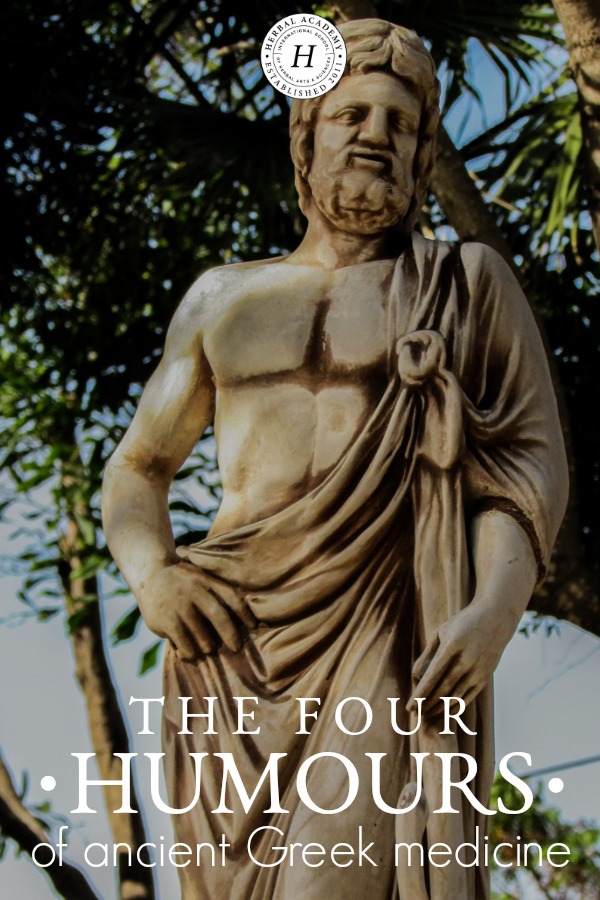 Arikha, N. (2007). Passions and tempers: A history of the humours. Retrieved from https://www.passionsandtempers.com